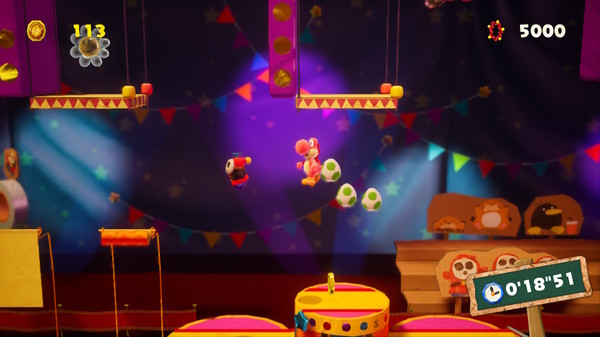 Come one, come all to Hoop-Jump Hop! As Yoshi performs wondrous hoop-jumping feats, he’ll have to collect Smiley Flowers and Red Coins against the clock, but don’t worry — we’ve documented all their locations and more in the guide below. 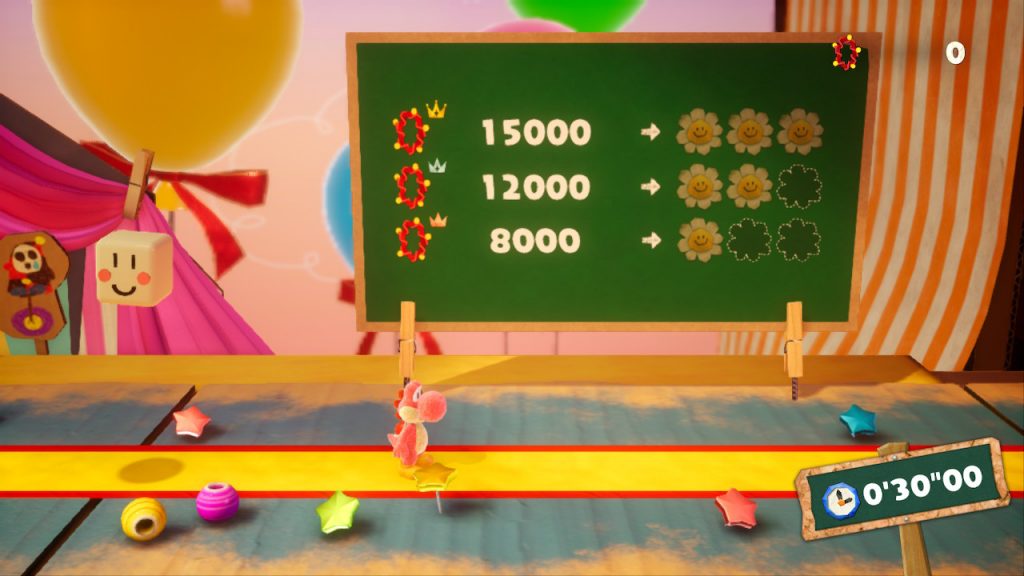 Like Go-Go Yoshi and Monty-Mole-B-Gone before it, Hoop Jump Hop revolves around a level-spanning mini-game, this time highlighting Yoshi’s acrobatics. Like an actual circus performer, he’ll leap through hoop after hoop in spectacular fashion, although he’ll need your help to pull off a dazzling performance. As seen above, the scoreboard refers to the points earned through (one flower for 8000, two for 12,000, and three for 15,000), but here’s two tips to keep in mind:

– By far the most important are the blue stopwatches — the clock’ll tick down as you leap about, but grabbing just one of these ticking clocks will reset the time back to 30 seconds. Considering that, you might not want to hunt down all the Red Coins while executing a three-flower run — focus just on hoops.

– Speaking of hoops, they grant 500 points each. Some are grouped together, but you’ll waste precious time if you miss through just one hoop. Even if you don’t think you’ll have enough points by the end, simply move on to get you practice in.

This isn’t a difficult level, so just keep at it and you should have have all three Smiley Flowers in no time!

Oh, and as for the last two flowers? You’ll find one floating between two ropes (can’t miss it, really — it’s in plain sight) and the other upon a platform reached by this Fly Guy. 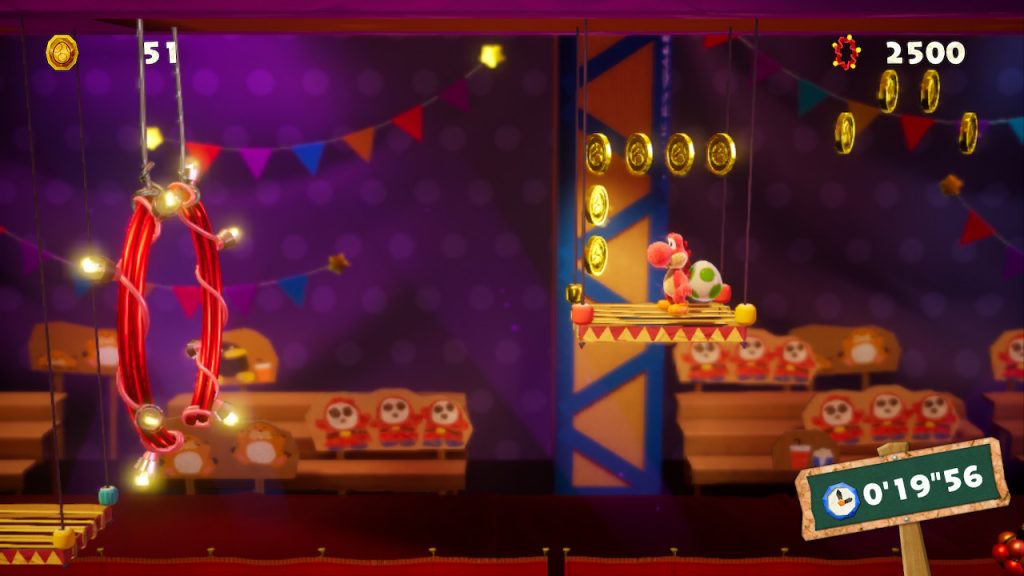 Most of Hoop-Jump Hop’s coins are clustered together, and with this level being as short as it is, you won’t have much difficulty finding them. Upon encountering the first swaying rope, grab it, then wait until it swings towards a suspended platform and nab the coins above to earn four red ones. (4/20) After collecting the next stopwatch, hop down to the bottom left platform and grab three more Red Coins. (7/20) Later, when grabbing a stopwatch via rope-bouncing, either keep bouncing or Flutter Jump through the airborne coins — sift through to find three more coins. (10/20) Immediately afterwards, smack the Gold Present here to earn another. (11/20)

Next, run underneath this platform to produce coins atop; run through them to discover two more Red Coins. (13/20) When you’re springing through more pink ropes, Flutter Jump to your left and land upon a platforming containing four more coins. (17/20) Afterwards, head back towards the goal and grab the final three coins underneath the stopwatch platform. (20/20) 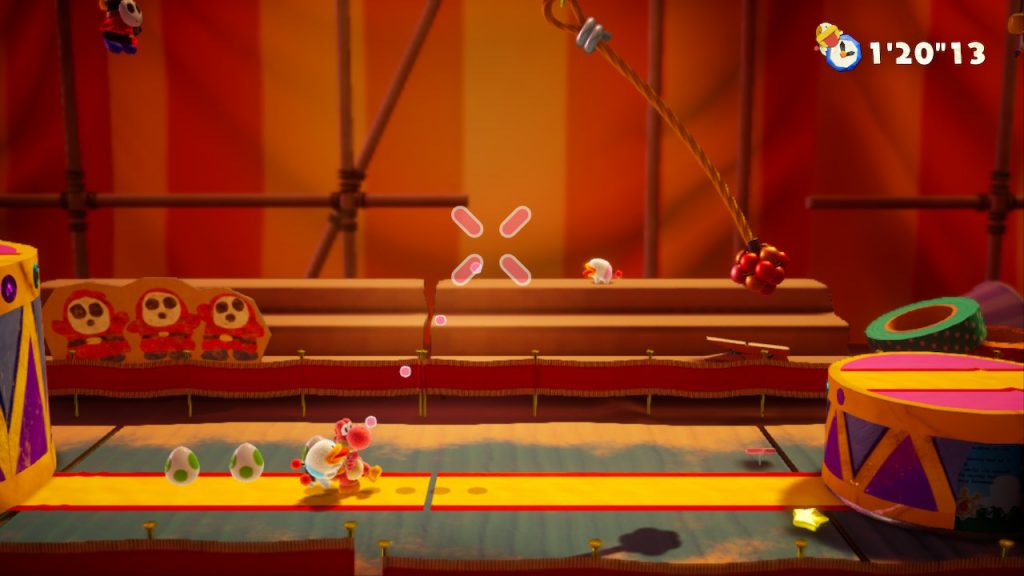 The Poochy Pups are so entranced by the circus that they’ve forgotten all about good hiding spots. You’ll find the first after the first rope sequence (climb up the final rope to spot it), the second attempting acrobactics midway through (simply Egg Toss it to nab it), and another running about the Shy Guy-filled seats as seen above — smack the Shy Guy cutouts if need be. 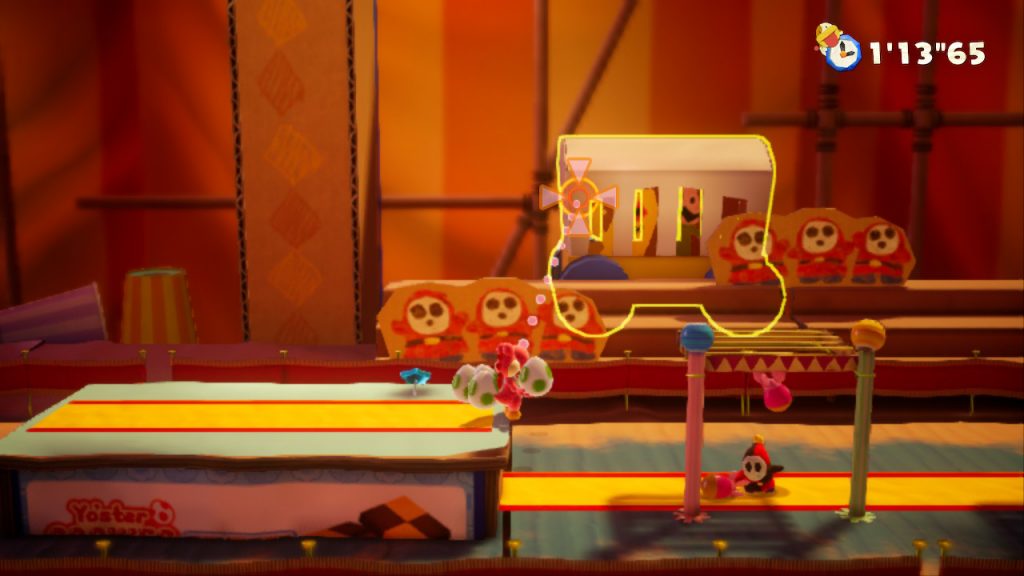 Wagon: This Flipside souvenir’s near the end of the level, and as seen above, it’s right behind some Shy Guy spectators.

Sneaky Shy Guys: Don’t underestimate these Flipside spies! Who knows what top-secret mission they’re on, but you’ll find the first in the stands just beneath the first set of pink ropes, the second hidden up by this platform, the third resting in a background wooden crate, and the fourth peeking out behind the tent at the very end.

And that’s a wrap for Hoop-Jump Hop! Let us know in the comments below if you have any further questions, but in the meantime, check out our Yoshi’s Crafted World guide hub! 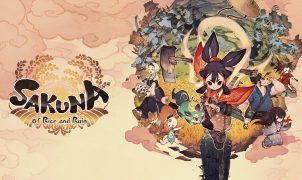 Rice, Ruin and Good Times     I’ve been interested in Sakuna since I first demoed it, which is a little strange since I’m not usually interested in farm…