Do you stand a ghost of a chance? 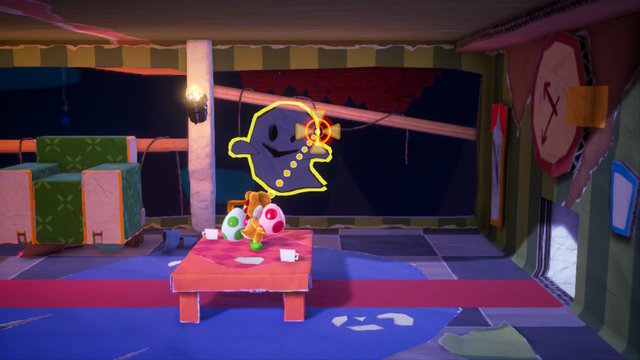 Zombie Shy Guys? Bone-chilling ambiance? Scythe-swinging stalker ghosts? Welcome to Haunted Maker Mansion, otherwise known as Yoshi’s Crafted World‘s nightmare fuel for poor, innocent Yoshis. Of more concern to you are the mansion’s supernatural hiding places for Smiley Flowers, Red Coins, Poochy Pups, and Souvenirs; naturally, we delved into The Land of the Dead and back to locate them just for you. 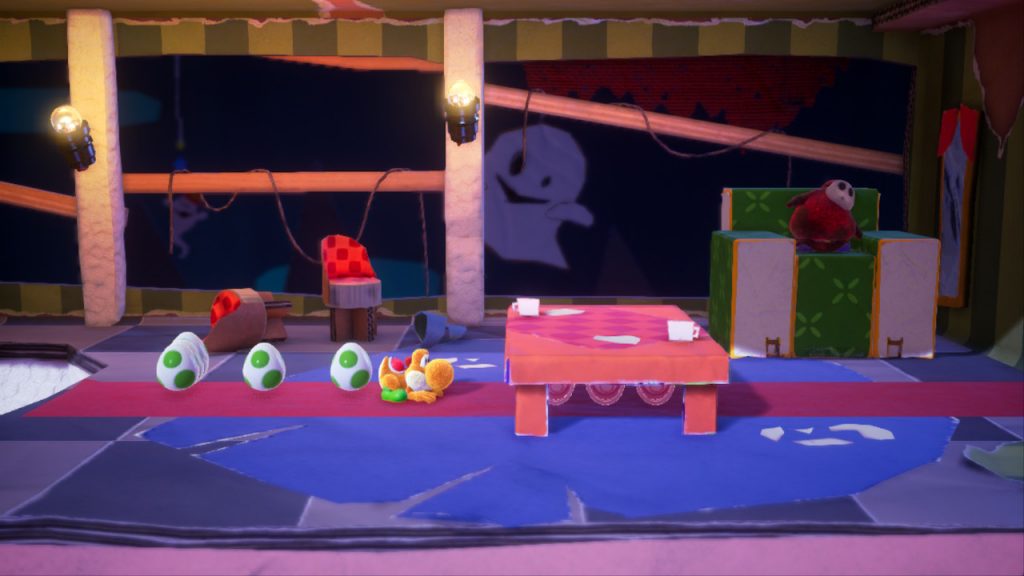 When you enter the mansion, wait for the cursed plate chandelier to fall down. Hitch a ride as it ascends to another floor, then jump to the platform to your left and pop the hidden cloud here to reveal two Red Coins. (2/20) Go back to the previous room and crawl under the table seen above to earn three coins (5/20), then smack the background ghost to earn another. (6/20) In the next room, toss the Fat Guy off his oversized chair and hop down the hidden passage to grab three coins. (9/20) Smack this pumpkin cutout for a coin, (10/20), then once you’ve left the mansion, scan the background carefully for a gold present and pop it open for another coin. (11/20)

Later, when you’re on the run from the scythe-swingin’ reaper cutout, jump through the incoming collection of coins to earn two red ones. (13/20) Inside the building, hop upon another paper chandelier and aim at the chest to lure out a cutout ghost; smack it, and it’ll yield a coin. (14/20) Once you’ve ascended to the upper floor, unseat the rightmost Fat Guy to fall through a hidden passage, then crack open another chest for three more coins. (17/20) Another chest awaits outside underneath the ramp, hosting the final three coins. (20/20) 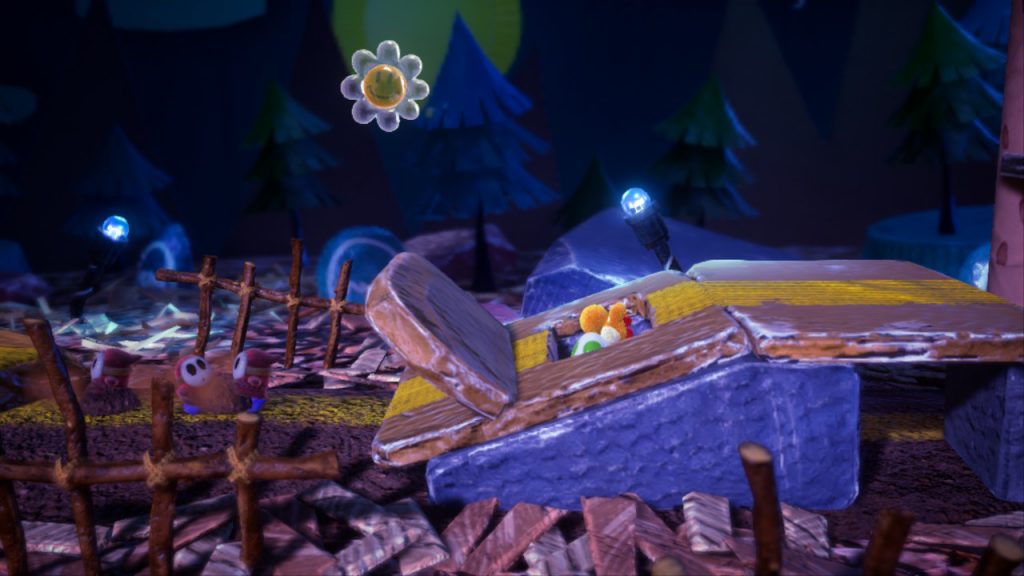 Soon after starting out, you’ll come across a slope with a hidden passageway underneath — run through it to reveal the Smiley Flower above. (1/8) When you’ve ascended the hidden floor via the plate chandelier, there’s one of two ways to grab this level’s trickiest flower: either aim here to reveal its hidden cloud host, or use the chair in the next room to hop upon the platform and barge through the clock. (2/8) Afterwards, go back to ground level and smack open this chest. (3/8) Once you’ve left the mansion, stock up on eggs via Zombie Guys and pop the Red Clock Cloud — successfully eliminate all three Monty Moles to earn the fourth flower. (4/8)

In the next building, you’ll encounter a blue ghost patrolling around the fifth flower; simply hop through the floor once its turned its back to grab the flower. (5/8) The next room’s host to a Blue Clock Cloud, but you’ll have to navigate around another blue ghost while collecting all the blue coins; really, all you have to do is pop the cloud once it’s patrolling the room’s upper level. (6/8) Upon exiting, climb the chairs and either Flutter Jump/hop from Fly Guy to Fly Guy to earn the seventh flower. (7/8) The final flower’s held captive by a pumpkin cutout, which you’ll reveal upon popping this flying cloud. (8/8) 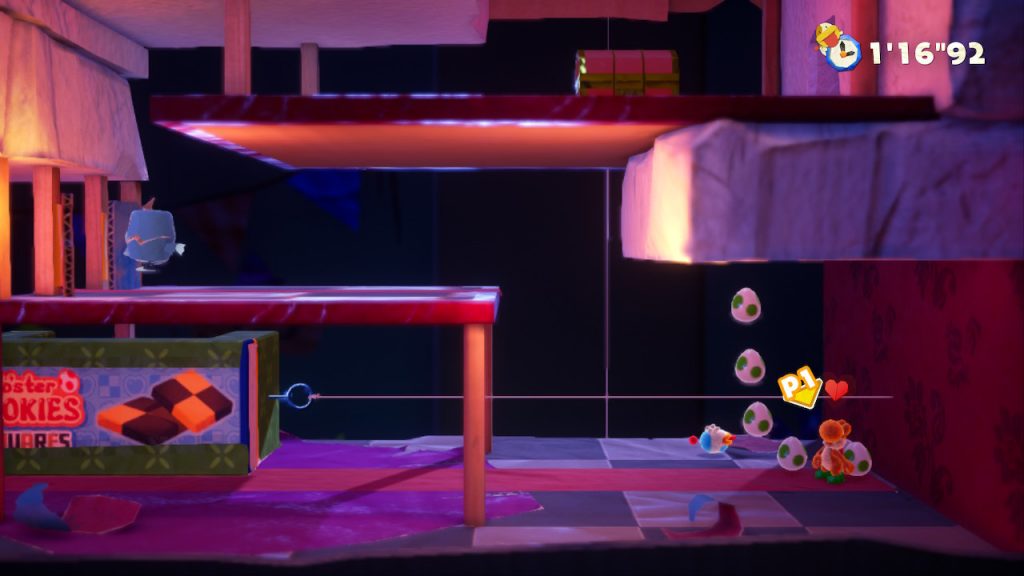 As seen by Yoshi’s exasperation above, the first Poochy Pup can give you some trouble — ascend to the first mansion’s upper level, then search behind the Yo’ster Cookie box in the ghost sentinel’s room. The last two pups are relatively easy to locate — the second’s within a chest accessed by a rope midway through (look for an Egg Block nearby), and the third’s running around behind the spooky cutouts in the final mansion. Thankfully, this Flipside time trial runs at about four minutes, so you should make it just in time. 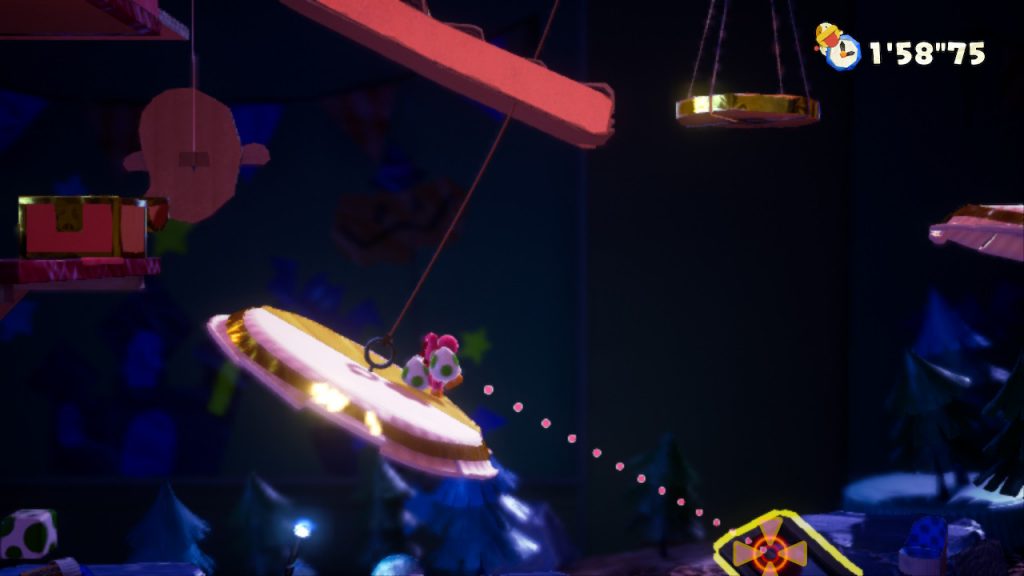 Poochy Picture: This Flipside souvenir’s been giving plenty of players trouble (including yours truly), but as it turns out, it’s just under your nose in the first mansion. Ascend the plate souvenirs for a proper vantage point.

Grandfather Clock: Near the end during Flipside’s final mansion, ascend to the upper level and enter the room where you found this level’s first two Red Coins — it’s right there in the background.

Night-Sky Ghosts: Haunted Maker Mansion’s chock-full of ghosts, but six of these are spotted haunting its skies. The first one’s behind the trees near the star, the second just outside the room accessible via plate chandelier, the third beyond the checkpoint, the fourth outside the trees past the Blue Clock Cloud room, the fifth in the building just past the second checkpoint, and the sixth sneakily hidden away in the final mansion’s Fat Guy room.

And thus ends our night of horror at Haunted Maker Mansion! Give us a holler in the comments below if you have any further questions, but in the meantime, check out our Yoshi’s Crafted World guide hub! 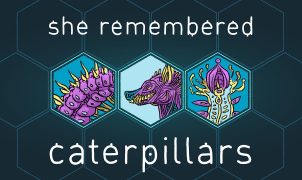 Broken Dreams, Fractured Reality     It’s been a while since I’ve last played a game like She Remembers Caterpillars. From its simplistic-yet-deep gameplay to its atmospheric presence, to its…