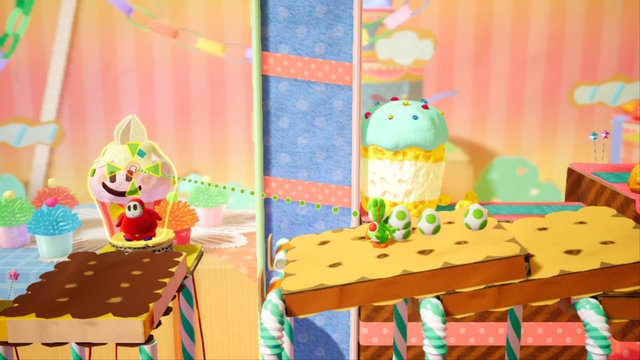 Yes, the sweets of Poochy’s Treat Run look positively delicious, but don’t get distracted — there’s Red Coins, Smiley Flowers, Poochy Pups, and Souvenirs to discover! We at Hey Poor Player ate–er, I mean, located them all for you in the handy guide below, so take a look if you’re too busy drooling. 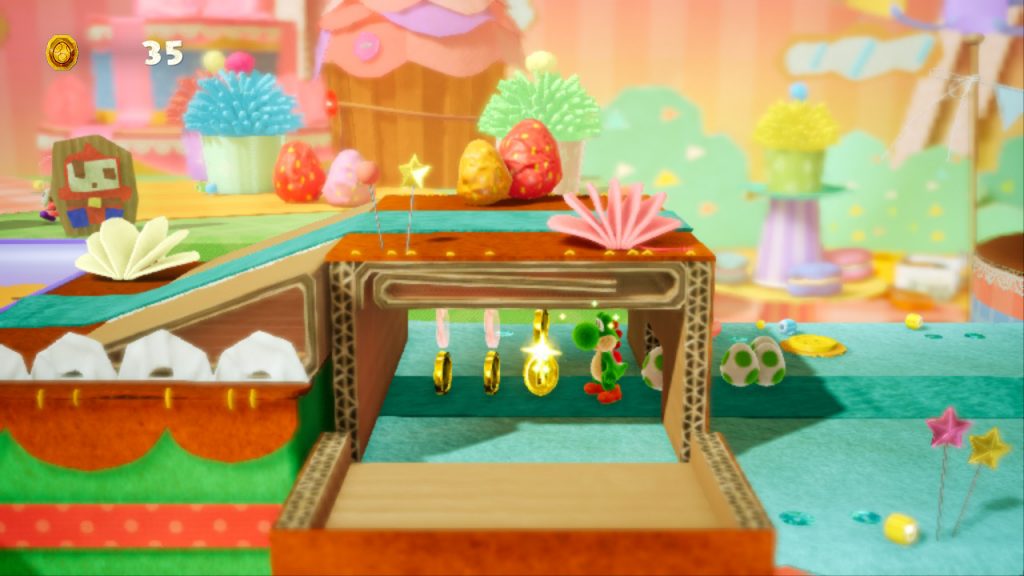 Your first coin’s held by a background Shy Guy by the domino wafers; watch out, though, as he sneaks behind cardboard Shy Guys to hide himself. (1/20) Immediately afterwards, you’ll encounter a gang of those delectable toffee towers, but don’t eat them just yet — instead, crawl through the hole to your left and nab two more Red Coins (3/20), then climb on top one of the roving toffee towers and Flutter Jump to reach the three Red Coins here. (6/20, and yes, now you can eat them.) When you’re crossing the poisonous swamp with Poochy, jump to the suspended platform and smack the distant cloud to produce an assembly of coins upon the deadly bog — ride on with Poochy to collect three more Red Coins. (9/20)

After Poochy runs off to score some fluffy treats, head to the next poisonous lake and hit the distant gold present with an egg to earn another coin (10/20), then hop onto the next sinking marshmallow and aim for the cloud under the wafer for two more coins. (12/20) When you encounter two more toffee towers, exercise lighter restraint in eating a couple on the left to reach the nearby building, wherein four more coins await. (16/20) The four last coins lie past the Blue Clock Cloud — before or after Poochy munches through two pancakes, Flutter Jump above to locate a hidden cloud. (20/20) 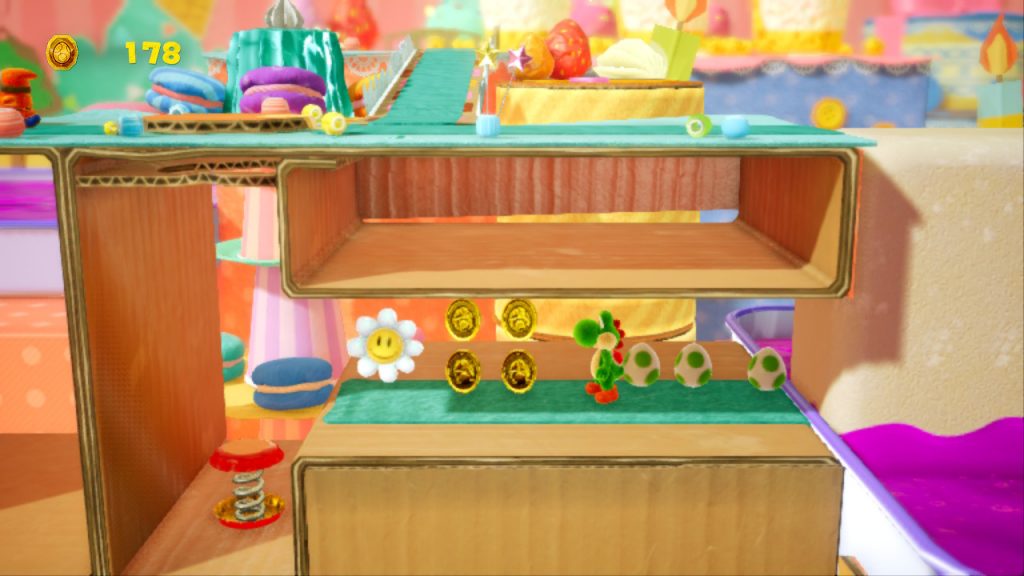 When you first encounter the tinfoil-plated toffee towers, climb aboard the brown tower sandwiched between and Flutter Jump to reach your first Smiley Flower. (1/7) After running into Poochy, ride him into the poison lake and then direct him leftwards to grab the hidden Smiley Flower underneath the cardboard. (2/7, and don’t forget to Flutter Jump out of harm’s way before Poochy sneaks under.) When you’ve parted ways with Poochy, hop aboard the first sinking marshmallow at the next swamp and wait until a hidden passage’s unveiled; enter to find the third flower as seen above. (3/7) You’ll come across a Red Clock Cloud shortly afterwards — among the two circles of Fake Smiley Flowers, the real one’s among the leftmost crowd. (4/7)

Keep an eye out for Fat Guys pushing down wafers soon afterwards, for a Smiley Flower floats behind them. (5/7) The Blue Clock Cloud may prove your toughest obstacle — ride Poochy as you tongue-nab each and every last apple, then hop off at the end to grab the last one. (6/7) Finally, simply ride Poochy during the cookie spring run towards the end and you’ll discover a floating Smiley Flower after the first set. (7/7) 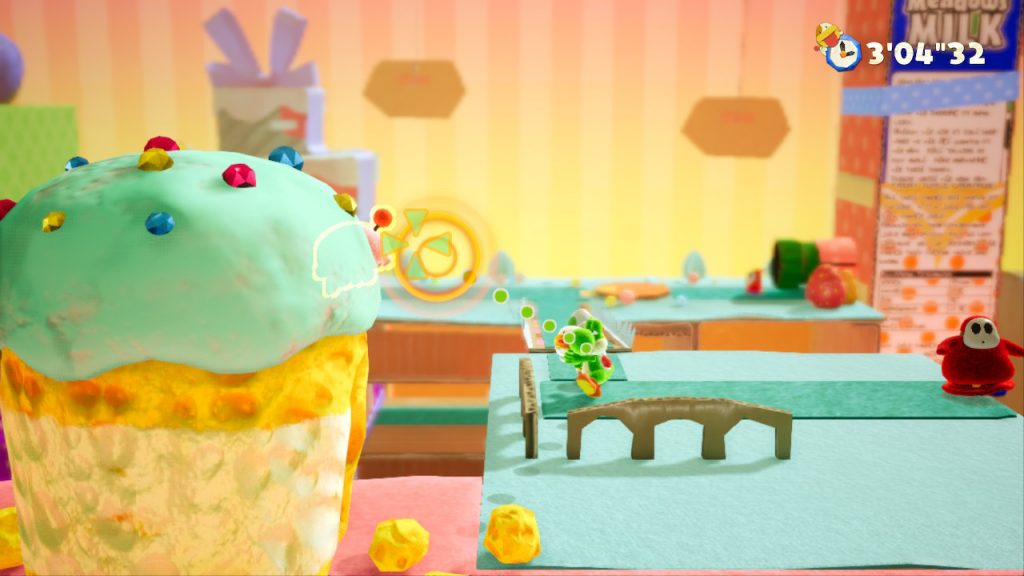 Those greedy Poochy Pups love these confectionery treats so much that they’re trying their damnedest to stick around, and you’ll certainly flounder about for it. Thankfully, we’re here to help — your first pup’s hiding behind a cardboard prop after the first two toffee towers, but he’ll give you the slip after you’ve revealed his hiding place. Whenever he crosses into your lane, simply tongue-grab to nab ’em.

You’ll find the second Poochy Pup hiding in a cardboard building past the second checkpoint, but as his hideaway’s unveiled upon entering, you’ll recognize you can’t enter! What’s a Yoshi to do? Simple: use the cookie springs up ahead to reach a vantage point and Egg Toss him outta there!

And as for the last pupper? Well, uh, the above pic speaks for itself. No shame! Still, going by Yoshi’s expression, we can’t help but feel he’s a little jealous… 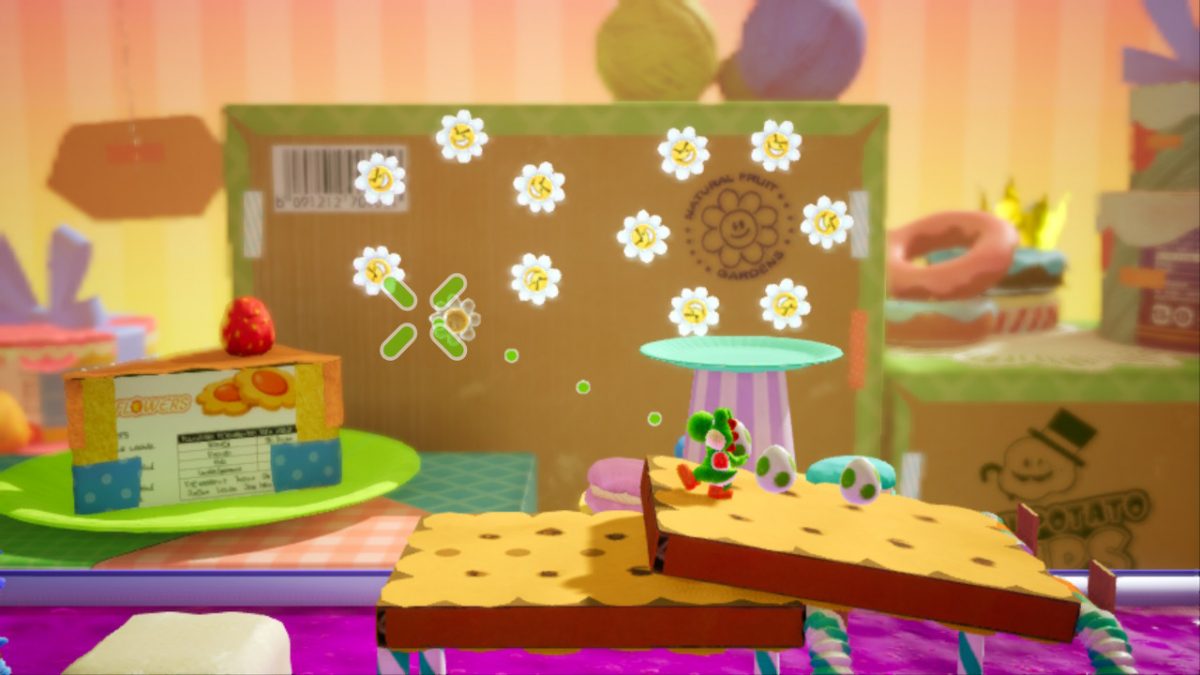 Yoshi Cookies: Five of these adorable cookies are hiding in this stage’s flipside, the first in the background following the two sets of toffee towers, the second past the checkpoint, the third atop the second Poochy Pup’s hiding place (the cardboard roof), the fourth just before the second checkpoint, and the fifth hidden in the hidden cave by the last couple toffee towers.

King of Donuts: This Flipside Souvenir’s the distance behind the two Fake Smiley Flower circles. If only we could have a bite…

And so we’ve reached the end of Poochy’s Sweet Run! Let us know in the comments below if you have any further questions, but in the meantime, check out our Yoshi’s Crafted World guide hub!

Futility has Never Been so Fun     It’s been a while since I’ve come across a game that ended up in the same way that Star Renegades has.…