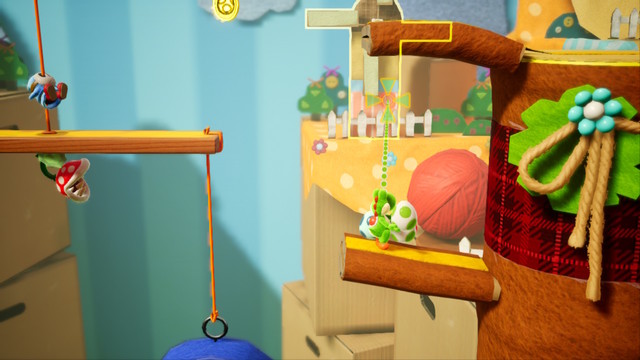 Strechy fabric and fuzzy windmills await in Stitched Together — the first level of Pastel Pathway in Yoshi’s Crafted World. While not the hardest level in Yoshi’s new Switch adventure, we’ve compiled all the locations for Red Coins, Smiley Flowers, Poochy Pups, and Souvenirs for your convenience. Let’s hop to it! 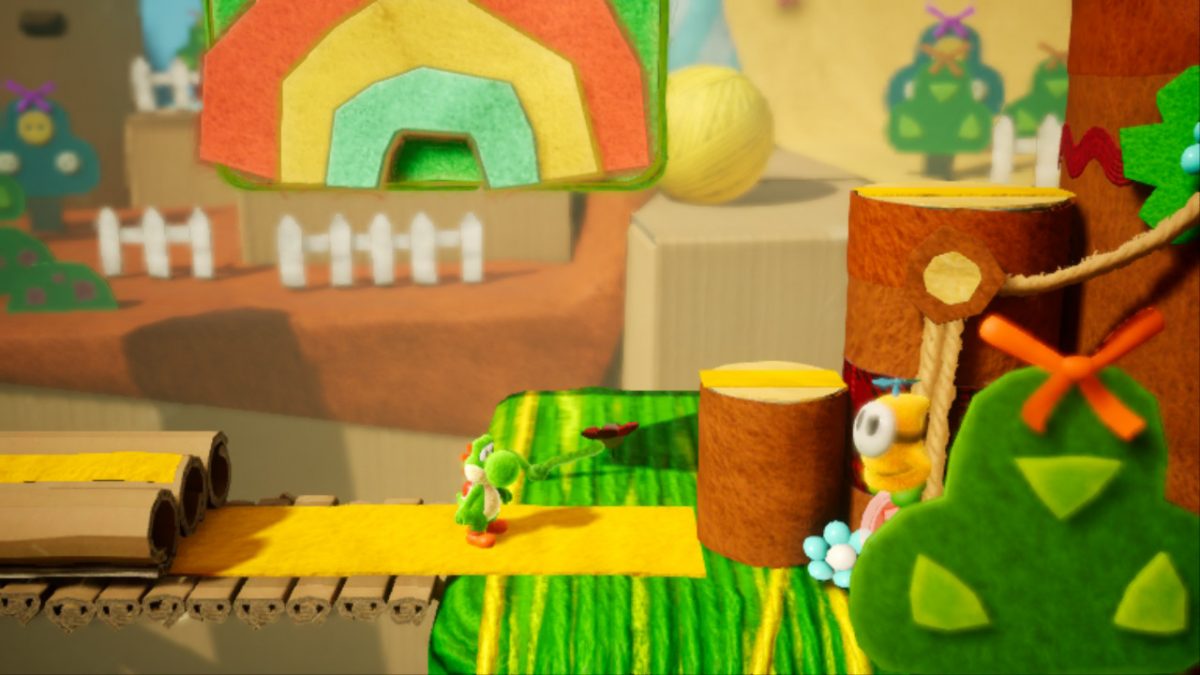 After ascending the first pair of cloud/rainbow blocks, jump upon the wooden platform and hop in the middle to reveal a floating cloud — pop it for your first coin! (1/20) Just before Yoshi ascends the second pair of cloud/rainbow blocks, travel as far right as you can and smack the foreground Fly Guy (as seen above) for another. (2/20) Next, toss an egg at the hidden cloud behind the cloud block to produce three red coins atop the wooden platform holding them together. (5/20) After hopping down from the first windmill, scan the surrounding area for a hidden Shy Guy behind the tree, and bop him for another coin. (6/20) Then hop towards the fluffy white fabric and push it all the way to unveil a hidden attic containing two Red Coins. (8/20)

Descend the Sun and Moon papercrafts and pop the golden present open for another Red Coin (9/20), then jump past the windmills and defeat the Piranha Plant for two more. (11/20) Three more are hidden in a floating cloud in front of the red windmill. (14/20) As Yoshi traverses the final trail of suspended blocks and papercrafts, aim for the floating cloud past the second sun for three more coins (17/20), then climb to the highest wooden platform for another cloud hosting the last three coins. (20/20) 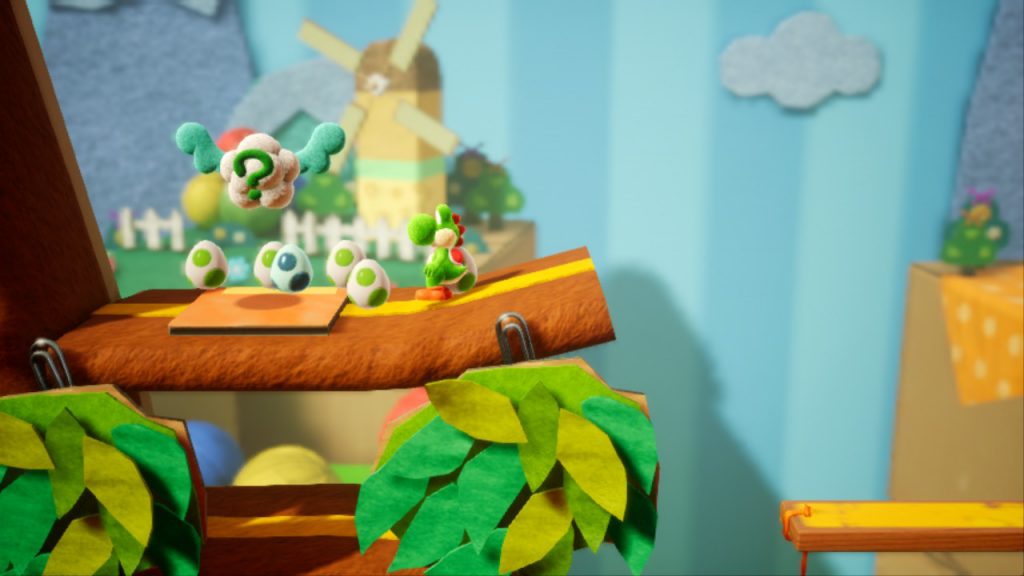 When you arrive at your first windmill, simply pop the floating for your first Smiley Flower. (1/6) As you’re ascending the celestial blocks, don’t rush ahead further into the level; instead, hop across the wooden platforms to your left to uncover a hidden cloud (as seen above) hosting a Smiley Flower within some bushy branches. (2/6) A Blue Clock Cloud awaits you between a pair of Sun and Moon blocks — you’ll have to be quick on your feet to nab all the Blue Coins in time! (3/6)

When you come across a blue-roofed house, enter and push the brown fabric within to uncover the fourth Smiley Flower. (4/6) After the checkpoint, go past the red windmill, but not the Red Clock Cloud; instead, run to your left across the wooden platform to reach a papercraft cloud with the fifth flower. (5/6) The last Smiley Flower awaits within a Red Clock Cloud — simply aim for the wooden cloud here to uncover the flower-carrying Fly Guy, but ensure you have enough eggs before tackling this challenge! (6/6) 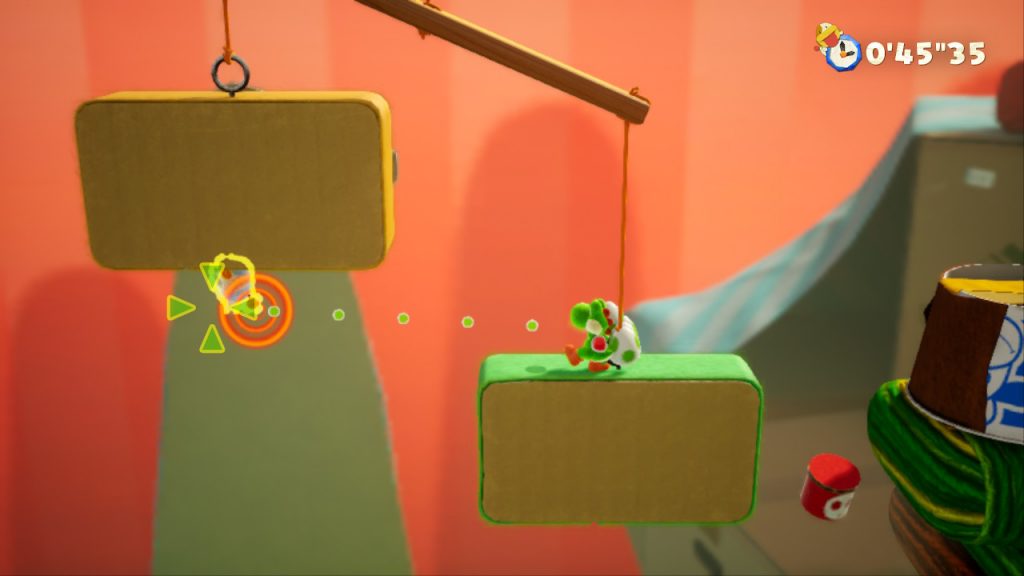 This Flipside venture may prove some trouble. The first Poochy Pup’s hidden past the first checkpoint, but you can only nab him with an Egg Toss when standing upon the second green block (as seen above). Later, simply push the white fabric under the second checkpoint for the next Poochy Pup. Finally, look underneath the final green block near the end to locate the last puppy. As long as you know what you’re doing with the first pup, you should be fine. 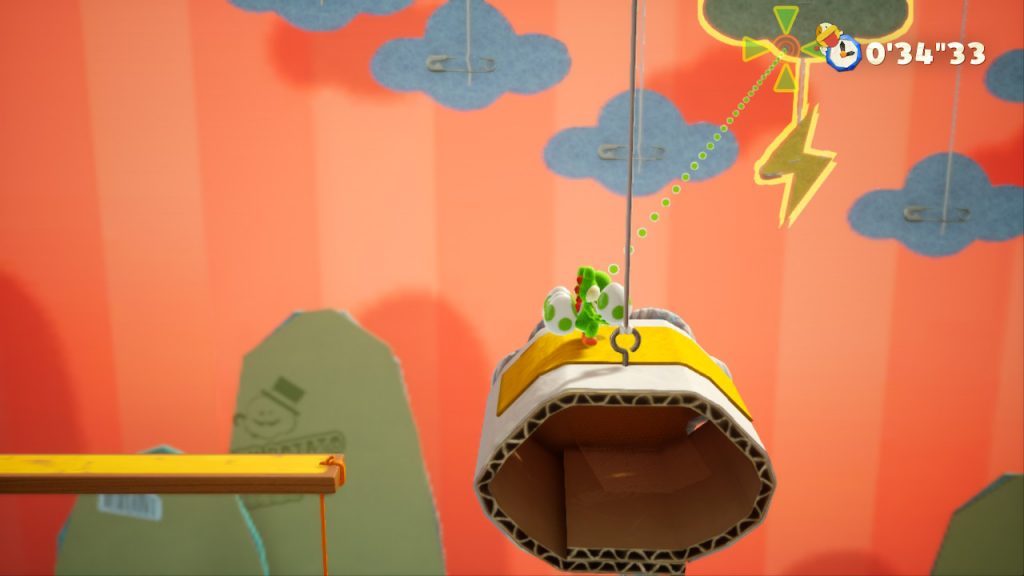 Stopped Windmill: In the background just beyond the cloud/earth block pair just before the Blue Clock Cloud. Remember: the sails are still!

Lightning Bolt: This Flipside souvenir is in plain sight soon after you start out. Can’t miss it!

Apple Tree: You’ll spot the first two trees by the first two pairs of cloud/rainbow blocks, the third down next to the first windmill, the fourth past the Blue Clock Cloud, and the last just behind this blue house.

And with that, Stitched Together has been, well, stitched together. Give us a shout in the comments below if you have any further questions, but in the meantime, check out our Yoshi’s Crafted World guide hub!