Mech-Mulching Mayhem Is In Season On Switch! 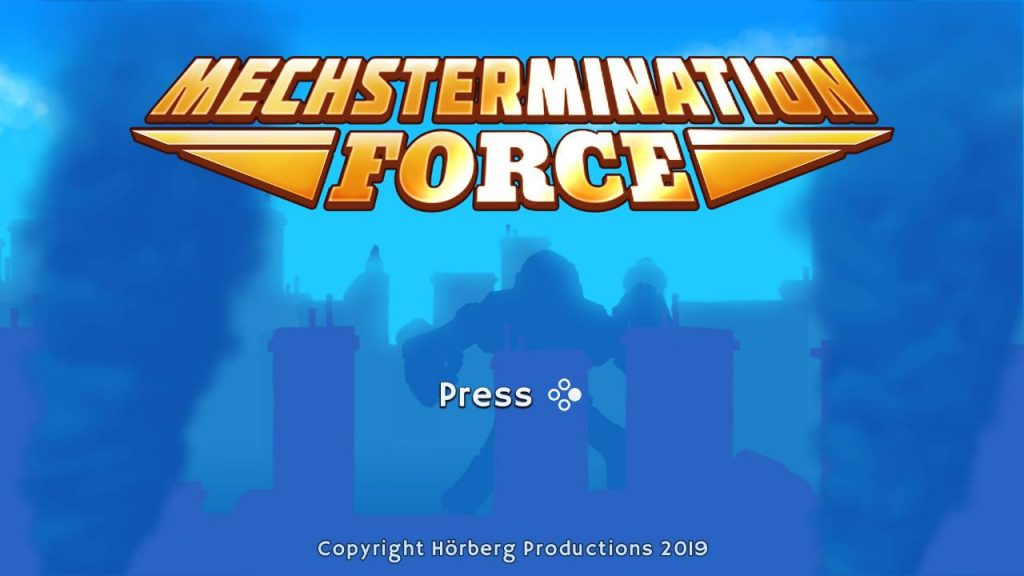 Run and gun shooters have been a favorite genre of mine since the olden days of Contra. Interestingly enough though, after the release of Contra Hard Corps, I came to realize that for as much as I enjoy sprinting through stages mowing down everything in my path, I find the most enjoyment stems from dealing with the end stage bosses. Creative adversaries that need to be toppled in a palm sweat-inducing firefight are perfect for ratcheting up the tension and honing your hand-eye coordination and reflexes. So, my interest was piqued when I heard that the makers of Gunman Clive on the Nintendo 3DS had made a new game, Mechstermination Force, that focuses solely on boss battles. Admittedly, I was expecting good things due to the pedigree of the developer. However, I was not anticipating the game to be THIS enjoyable!

Mechstermination Force’s gameplay consists of a rather pleasant loop in which you speak to the General at your base, who then allows you to choose from one of the stages available to you. When you arrive at your destination, you are immediately met by a boss mech whose immense size dwarfs your player character by comparison.  At this point, the objective becomes to locate the red cores on the marauding machine and destroy them to trounce the robot for good. At your disposal is your trusty sidearm gun which can be used to eliminate parts of the mechanical menace as well as some of the projectiles that come your way. The other tool that’s initially available to you is your trusty sledgehammer which can be used to get up close and personal with your target. 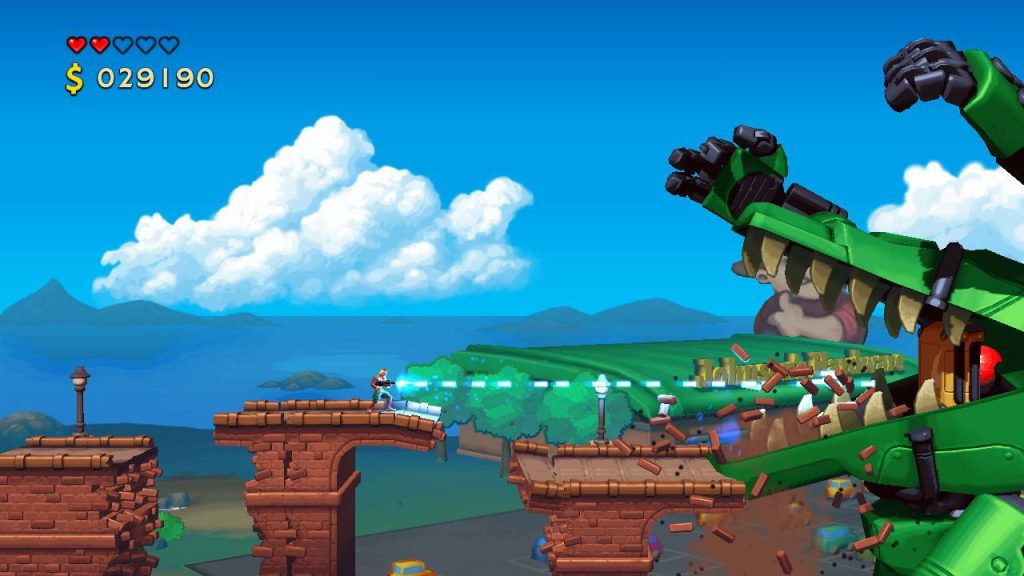 All those sessions of Crocodile Dentist finally come in handy!

While most of your opponent’s destructible parts are vulnerable to gunfire, the aforementioned red cores are immune to firearm damage.  To break these, you’ll have to attack it with your sledgehammer weapon up close and personal. For me, I felt that this gameplay decision comes as a welcome detour to how I traditionally approach games of this style. Being able to keep your distance from enemies with gunfire and surviving by dodging bullets until your foe has been vanquished allows you to play it safe. But now, you are forced to find a way to close the distance between yourself and the target to prevail which puts you further at risk. More often than not, the enemy will have multiple phases to the battle and new cores to destroy once you blow up the initially exposed ones. So staying on your toes and adapting to new situations is the name of the game in this bullet ballet — a challenging endeavor but one that you’ll find yourself enjoying on each successive attempt.

If you manage to win, you’ll be awarded some cash for your troubles then promptly dropped back at base where you’ll be able to purchase new guns and more health for your character. Sometimes, the shop owner will also provide you with new gear to improve your character’s mobility. My favorite item of these are the magnet gloves which allow you to climb along surfaces. The moment you unlock these upgrades, the upcoming enemy bosses will require you to make use of your new gear. Multi-screen towering monstrosities are not out of the norm in Mechstermination Force, and I couldn’t be happier for it. Also worth mentioning is the fact that you can retry previously defeated bosses to grind money as well as attempt to earn accolades for quicker destruction times and for taking no damage. 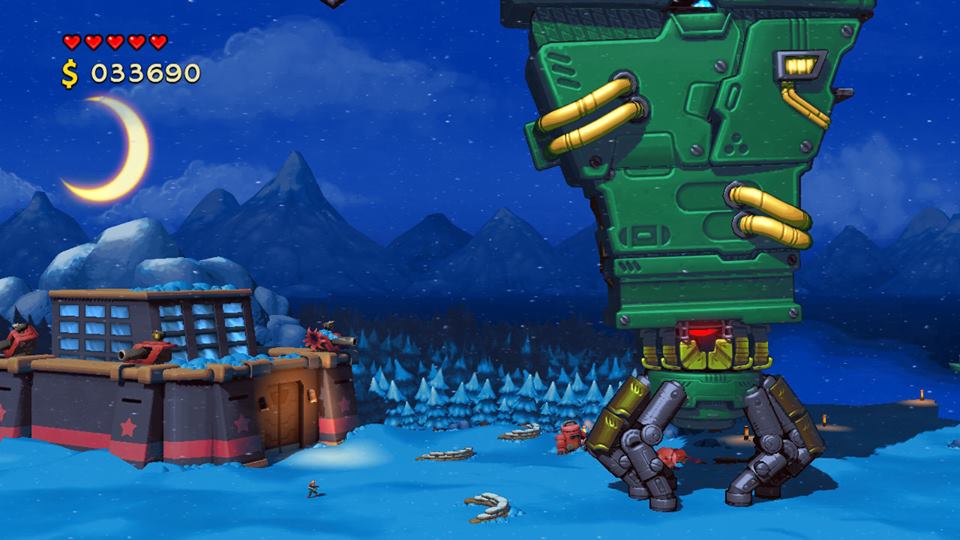 Did we mention the bosses in Mechstermination Force are big? Yeah? Okay, just making sure.

Deaths will come quite frequently in Mechstermination Force, and while you may find yourself inclined to blame the game’s controls, it will likely be out of gamer spite and not out of legitimacy because the controls in this game are reasonably tight.  I did have a few moments where I felt the magnet gloves didn’t attach when I thought they should, but that ended up being short-lived as I adjusted to their use. Fortunately, you also won’t have to wait very long to take another crack at scrapping those scumbots as retries happen very quickly through simply pausing and opting to retry the stage. The extraordinarily catchy and frantic tunes help with this as well as I never found myself tiring of listening to them though I did chuckle at the fact that they still seem to have a western tick to them – clearly displaying their Gunman Clive chops.

Ultimately, your thoughts on this game will heavily depend on what you come into it hoping to find. If your run and gun action requires item pick-ups and long stages then you, unfortunately, won’t be seeing that action here. Likewise for if you like your games to be light on the challenge side. However, if you are here looking for some very tight and well-designed white-knuckle boss shootouts that unfold over colorful scenery and sweet tunes, then Mechstermination Force is absolutely the game for you. Before getting this review code, this title was surprisingly unknown to me but I’ve come away from it feeling like it may be one of my favorite games on the Nintendo Switch. It doesn’t try to be overly ambitious but, instead, takes one a core concept and does one hell of a job with it. Seriously, get out there and mash some metal!

Full disclosure: The publisher provided a review code for this title. 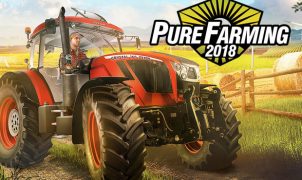 Pure Farming 2018: Farmer’s Tan Not Included   Farming isn’t exactly what most would consider to be an exciting activity. It’s generally hard work, filled with long days and…