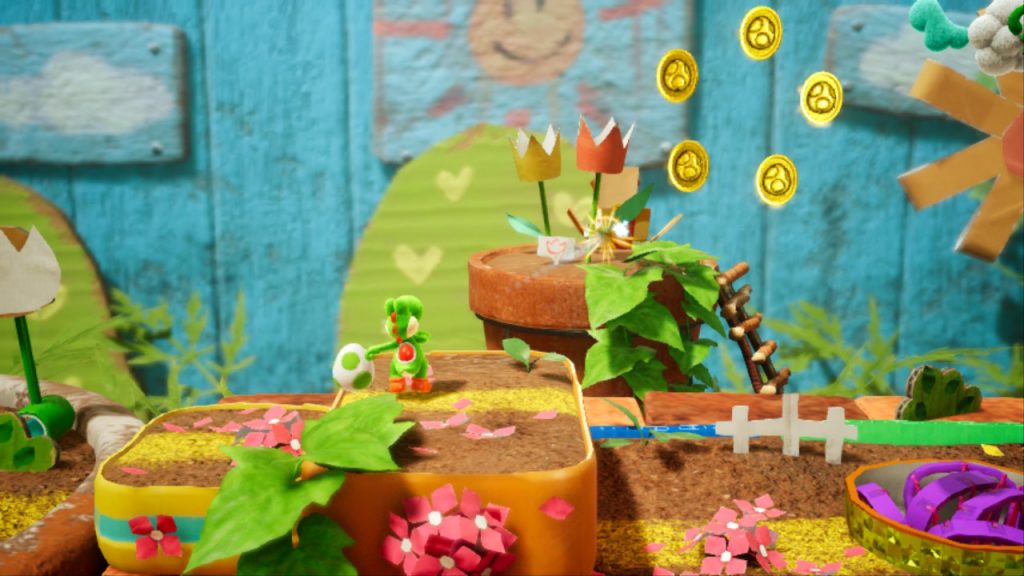 After toppling the Tin Condor, Yoshi finds himself taking a leisurely stroll through the Spring Sprung Trail. This pastel-painted nature hike isn’t too taxing, but you’ll need to pay close attention to nab all of the collectibles hidden in this colorful playground.

Launch an egg to blast the present atop the potted plant in the background to net your first red coin (1/20). Just a short ways ahead, you’ll find a spinning flower wheel. Run on it and collect the orbiting coins to net your second red coin (2/20). Waltz through the first checkpoint and you’ll come across the mouth of a bottle. Climb in and you’ll find a whopping 2 red coins (4/20). After you’ve stuffed your dino pockets with those shiny treasures, move on and take the road towards the background and proceed to a flowerbed loaded with Monty Moles. Run on the third flower wheel and a question cloud will appear. Shoot it to collect three red coins (7/20). Proceed to the right and you’ll find another red coin (8/20) in the clutches of a Monty Mole cowering behind some wooden planks in the distance. Bop him with an egg and it’s yours. Keep moving and you’ll find three swaying flowers accompanied by three question clouds. Blast the one on the right to collect 3 more red coins (11/20). Lob an egg at the Monty Mole hiding in a bush just past checkpoint #3 to collect another coin (12/20). Proceed past the decorative smiling flowers in the background and you’ll find a yellow springing flower stuck in its pot. Butt stomp it to free it and score yourself 3 more red coins (15/20).  The next two red coins (17/20) appear after defeating this horde of ravenous Monty Moles in the flowerbed in front of the rainbow near the end of the stage. Nice work. We’re almost there. The final three red coins (20/20) are just ahead. Butt stomp the yellow potted plant between the flower wheels surrounded by Shy Guys to claim the final three coins. 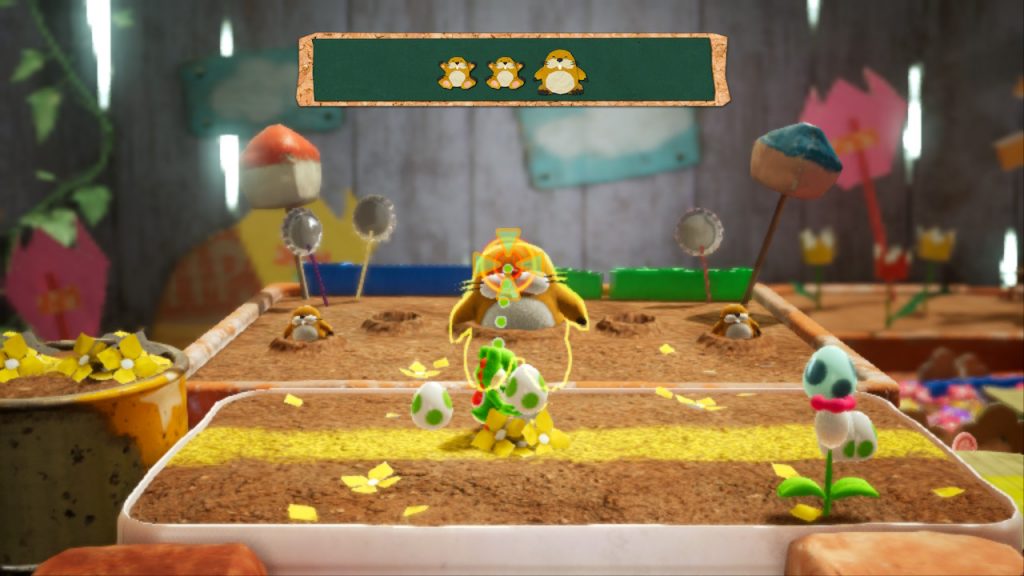 Not long after the beginning of the stage, you’ll come across three large flowers in the background. Launch an egg at the question cloud to get your first Smiley Flower (1/7). The next Smiley Flower is located just before the first checkpoint, floating just below a hovering Shy Guy. Nab it and flutter jump to avoid falling into the bottomless abyss (2/7). A short distance ahead you’ll find another three swaying flowers with three question clouds floating around them. Bop the one in the middle with an egg to get Smiley Flower (3/7). Keep moving to the right and you’ll find a timed challenge cloud. Activate it and pop the three balloons in the distance and you’ll be awarded with another Smiley Flower (4/7). The fifth Smiley Flower can be found tucked within a potted plant located between to springing purple flower platforms. Butt stomp the plant to get yourself another Smiley Flower (5/7). After collecting flower #5, take the path towards the background near the plants decorated to look like smiling faces and blast the flip screen cloud which begins a shooting gallery mini-game. Take out the two Monty Moles and their Chungus of a leader to collect the penultimate Smiley Flower (6/7).  Heading towards the stage’s exit, you’ll find a bottle jutting out from the bottom of a wall. Climb in and you’ll find Spring Sprung Trail’s final Smiley Flower (7/7). 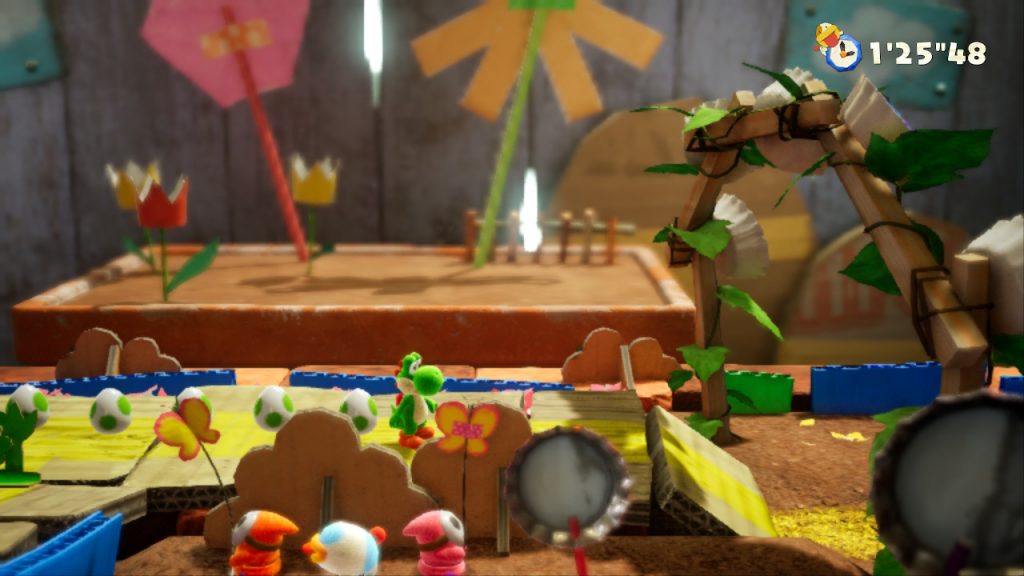 You’ll find your first Poochy Pup shortly after the stage begins. After spotting Yoshi, he’ll run off into the distance. When you approach the two large flowers just past the egg dispenser, take the path upward and you’ll find your Goodest Boy hidden behind a shrub surrounded by two Shy Guys. The second of our furry friends is gracefully galloping between a bunch of decorative flowers in the background. Lob an egg at him to show him we don’t have time for that silliness. Lastly, the third and final Poochy Pup can be found playing in the Monty Mole holes on either side of this springy flower just before the stage’s exit. 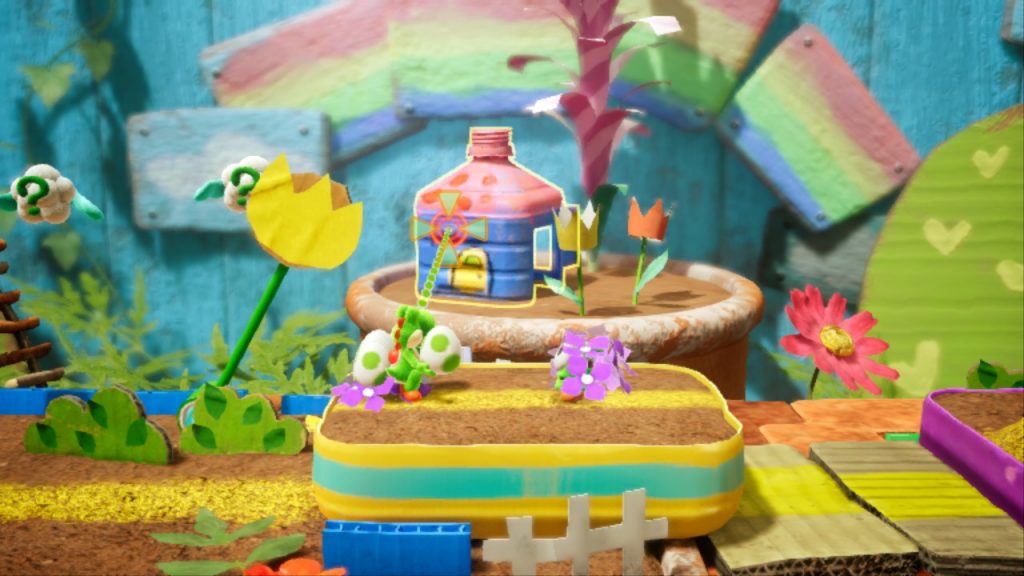 Proceed through a flowery arch and you’ll find the Bottle House souvenir on a flower pot in the distance.

Spring Sprung Trail also has five butterflies to collect throughout its colorful expanse. The first of which can be found near the egg dispenser at the beginning of the level (1/5). Moving on, you’ll find the next butterfly clinging to a wooden archway covered in flowers (2/5). You’ll find the third butterfly in the background near a yellow flower after completing the stage’s timed challenge (3/5). Keep on trucking until you find yourself in a flowerbed with a doodle of the sun in the background. The fourth butterfly is tucked away just behind the pinwheel on the right (4/5). Lastly, move ahead to where the path begins to lead to the background (the flowery area with the towering smiling flowers in the background) to find the last butterfly resting on a flowerbed (5/5).

Congratulations, you’ve now collected all of the shiny treasures tucked away in Spring Sprung Trail!