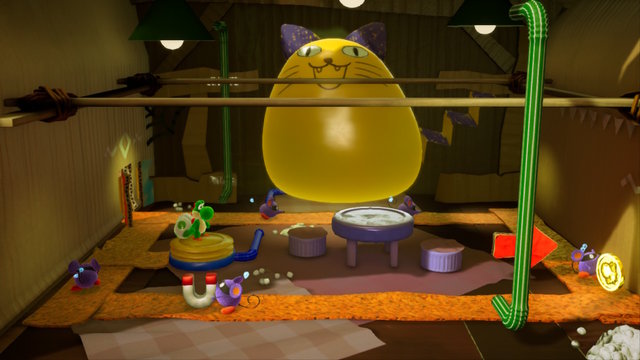 Update (4/21): We’ve fixed a pic goof-up regarding the Crystal Block souvenirs! Thanks to those who wrote in!

Those infernal mousers are at it again in Mousers and Magnets, but fret not: we at Hey Poor Player have unveiled their stashes of Red Coin, Smiley Flower, Poochy Pup, and Souvenirs. Let’s stick it to those thieving mice!

When you’ve passed the first magnet-activated gate, attach the magnet to the following green can, then hop leftwards from arch to arch ’till you get two Red Coins. (2/20) Head back down, and you’ll eventually spot a coin-carrying Mouser peeking behind a boulder. Smack him! (3/20) After you’ve raided the first Mouser hideout, take the magnet and fix it to the blue can to earn four more coins. (7/20) Then go back and smack the gold present nearby with an egg for another coin. (8/20) Shortly afterwards, you’ll encounter two Mousers tossing a Red Coin back and forth; either attack with Egg Toss, or perform a perfectly-timed jump to snatch it away. (9/20) Following the Blue Clock Cloud, jump up the magnet and arch to reach two more coins by the green can with the bird engraving. (11/20, but seriously, what are those?)

After you’ve put the smackdown on another boulder-obscured Mouser (12/20), check the nearby platform for a hidden cloud, then run through the coins to earn one Red Coin. (13/20) Next, unleash cat balloon mayhem in the next Mouser hideout and annihilate the hapless mice within to nab two more coins. (15/20) When you’ve obtained the two magnets to open the gate, hop aboard the magnet-fixed can to uncover a hidden cloud; pop it for two Red Coins! (17/20) After the gate, aim for the cloud hidden nearby for the three last coins. (20/20) 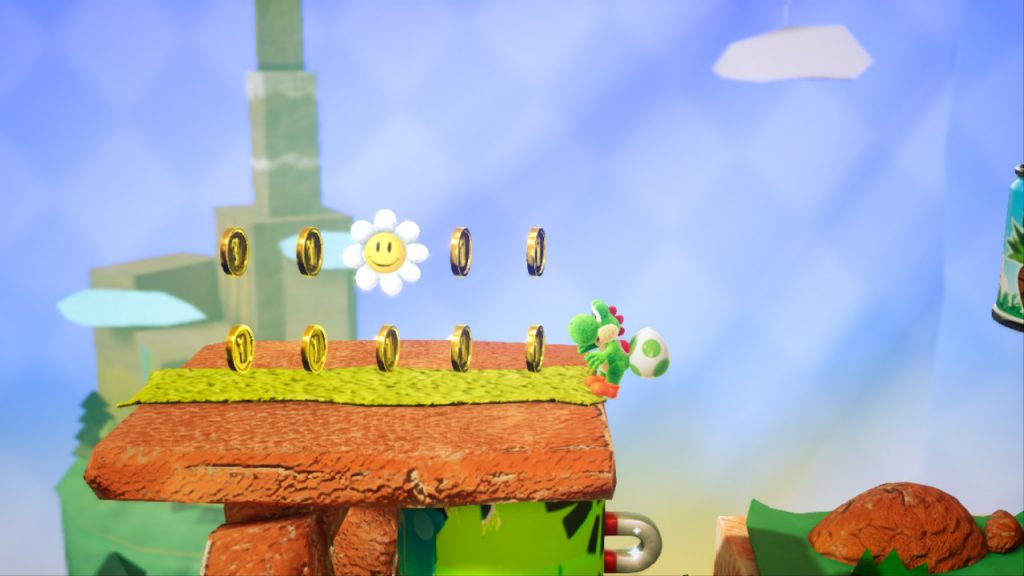 After removing the magnet to unlock the first gate, stick it onto the green can to hop up and nab your first flower. (1/7) Afterwards, make your way through the gate, Ground Pound through the brown boxes and defeat the Spear Guys to reach the second one. (2/7) You’ll eventually stumble across a Blue Clock Cloud after the first Mouser hideout, wherein you eat three apples to earn a third flower. (3/7, but bear in mind the last one’s tricky — jump at the right moment to tongue-snatch the apple away from the Mousers).

A Red Clock Cloud awaits you nearby — replenish your Egg stock via the nearby Egg-Plant, then carefully aim at the Mousers and/or Coins to earn your fifth flower. (5 but technically 4 /7) Wait, fifth? What about the fourth? Why, we just passed it — grab a nearby magnet, head up to the green can past the stone arch, and fix it there to reach the fourth flower. (4 but really 5/7) Oh, those tricky Mousers! Or is it the developers at Good-Feel? Whatever — raid the second Mouser hideout, but don’t take the magnets to the gate just yet; instead, attach them to the green can inside so you can reach the sixth flower. (6/7) For the final Smiley Flower, ascend the green can towers, then Flutter Jump to the top of the the first one. (7/7) 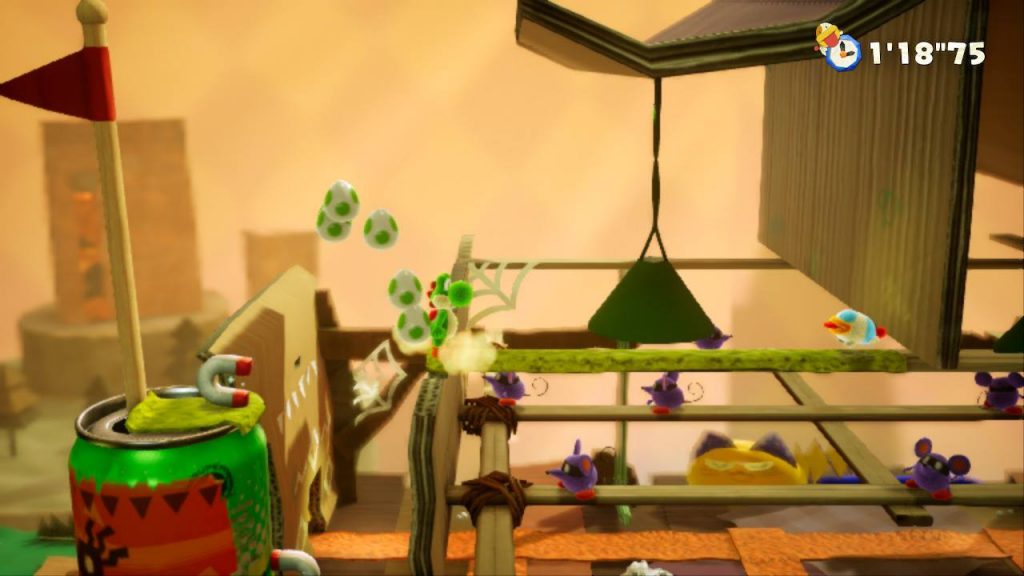 This one’s actually pretty tricky! You’ll hear the first pup barking in the first Mouser hideout, but it’s reached via the same method as the sixth Smiley Flower: attach magnets to the green can, then climb up to the roof as seen above. The next Poochy Pup’s chilling in the second hideout’s rafters, so scare it down with the cat balloon and then aim with Egg Shot to grab it. Finally, attach the magnet to the blue can here to lure the final Poochy Pup out of the magnet gate.

As you can only hear the first and third Poochy Pups, going into this blind will likely bring about one or two retries, but so long as you know what you’re doing, you should reach the goal on time. 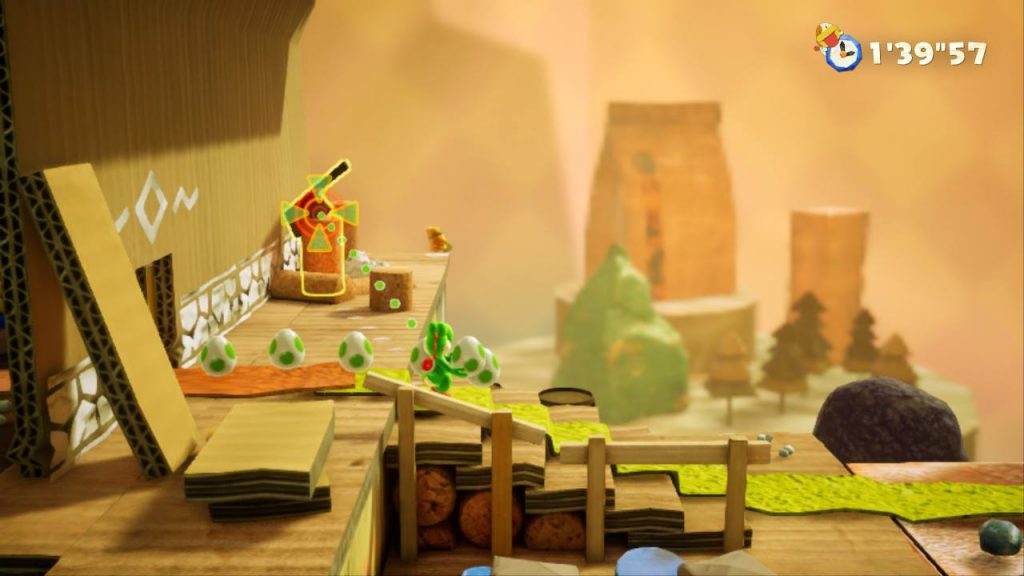 Tent: You’ll find this Flipside souvenir in the distance after the first Mouser hideout.

Crystal Blocks: There’s six of these blue cubes in all. Your first one’s by the second magnet can, the second by a cookie billboard, the third nestled by a stone arch, the fourth hidden by a stone stairway, the fifth obscured by a rock and occupied by a Mouser (search after the second Mouser hut), and the sixth by the final hillside after your boulder-riding stunt.

Caramel Billboard: In plain sight by the Red Clock Cloud.

And that’s Mouser and Magnets done! Give us a shout in the comments if you have any additional questions, but in the meantime, check out our Yoshi’s Crafted World guide hub!