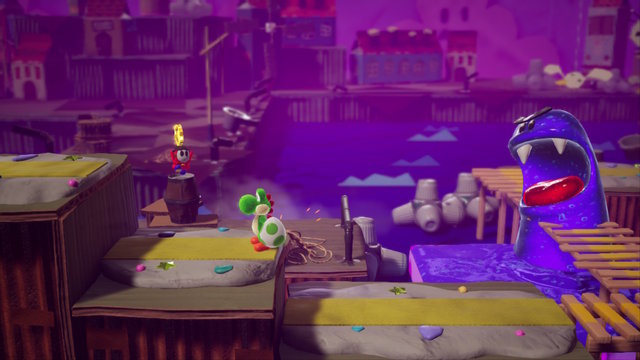 Yar, ye dare step into the chilly docks of Pirate Pier? Then ye need all the help ye can get hunting down its booty! Thankfully, we at Hey Poor Player have cataloged all its treasures in Smiley Flowers, Red Coins, Poochy Pups, and Souvenirs! 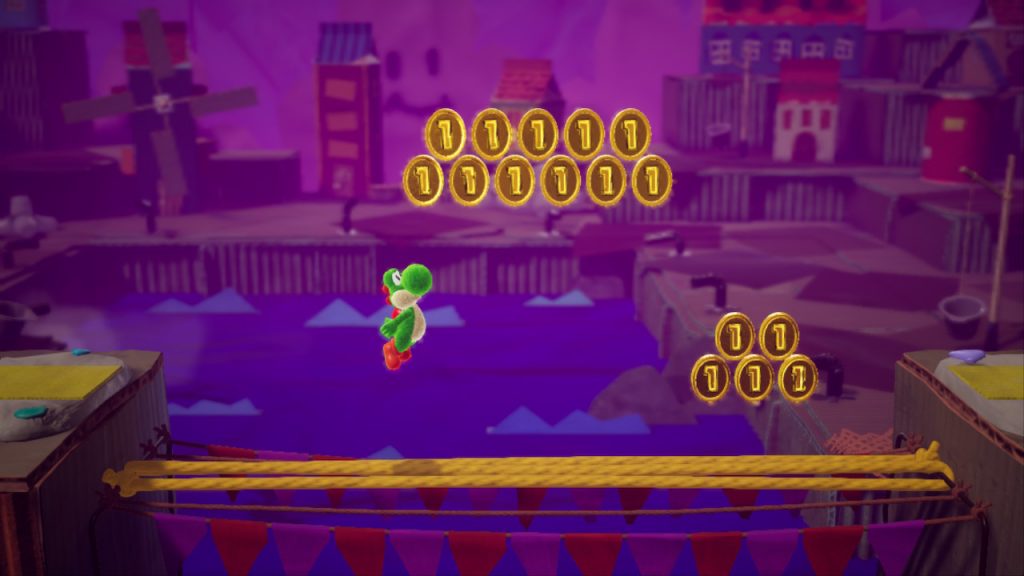 Right after the beginning, three Red Coins are hidden in the coin cluster above the bouncy rope. (3/20) You’ll encounter a series of Smiley Flowers afterwards, but eventually you’ll make your way to a docked ship — time for a raid! Pop the floating cloud for four Red Coins, and smash the present for another one! (8/20) Continue until you find some Pirate Guys bouncing on more ropes. Will you squeeze by its guard to reach the nearby cloud, or murder him in cold blood to reach your prize? (11/20)

Regardless, journey on to the waterwheels and hover above the blue Fly Guy to nab more Red Coins. (15/20) Shortly afterwards, you’ll spot a Pirate Guy holding his Red Coin for all to see; teach him a lesson on Pirate Pier do’s and don’ts, why don’t you? (16/20) Round off your doubloon hunt at the level’s very end by attacking the Blarrg (the water monster) guarding the three last Red Coins and a Smiley Flower. (20/20) 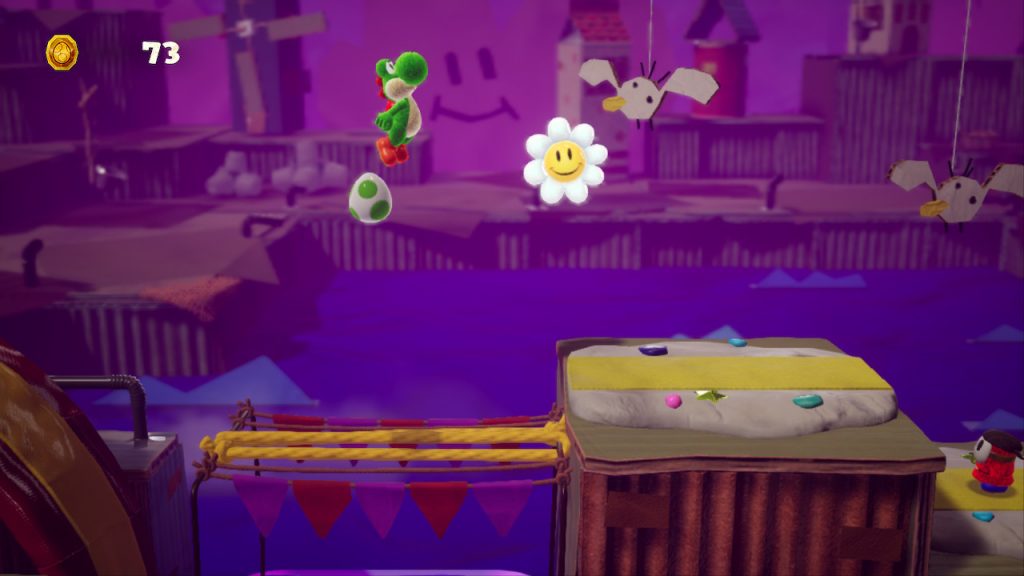 Pirate Pier ramps up the number of Smiley Flowers to six! Thank goodness you find three right away: from the top, we got one sitting by a dozing Shy Guy (1/6),  a Blue Clock Cloud mini-game where you collect blue coins (2/6), and another hiding under a pink awning just past the first Blarrg. (3/6) Move on ’till you reach the first checkpoint, then take down the Blarrg and pop the cloud for another Smiley Flower. (4/6) Later, you’ll come across your first Red Clock Cloud, which flip Yoshi’s perspective for an aiming mini-game. As you’ll fire eggs at three Pirate Guys, ensure you have enough eggs so you’re not scrambling for more! A Smiley Flower will be granted upon your success. (5/6)

Your last Smiley Flower is earned alongside Pirate Pier’s last three Red Coins, which are guarded by a Blarrg at the level’s end. (6/6) 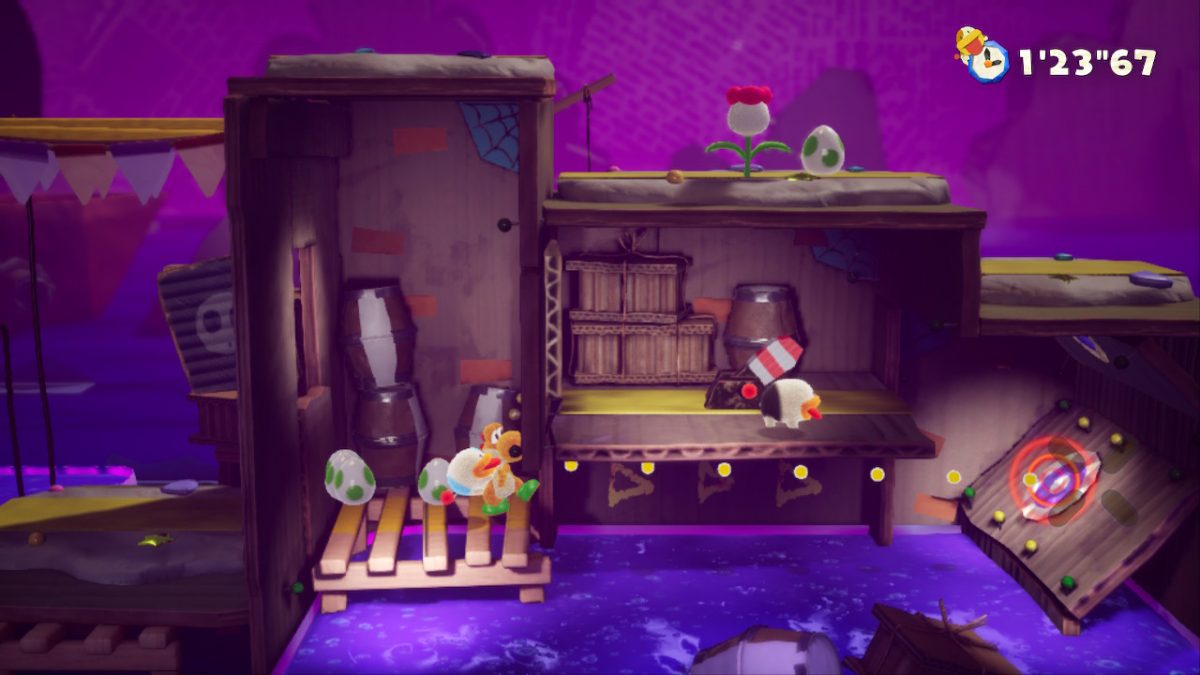 While two Poochy Pups are found easily enough — one practically runs straight into your arms near a ship and the other’s found near the end in a secret storage you crawl into — the second one above can give some trouble. As depicted above, you’ll need to throw an egg at the target so it can ricochet into the switch, thereby opening the cardboard door so you can reach the pupper. Don’t repeat Yoshi’s mistake above and toss a Poochy Pup at the target, as they lack the necessary properties to bounce off. (That, and well, why would you do that, anyway? Bad, Yoshi, bad!) Again, keep a calm head and you should reach the goal in time. 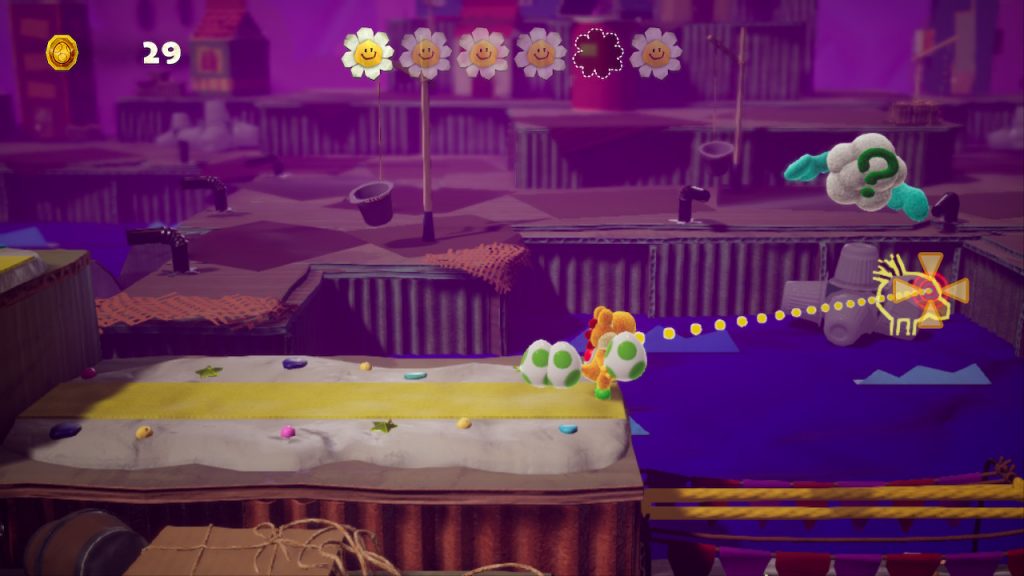 Flightless Goonies: As the name implies, these fuzzy Goonies lack wings; to make matters worse, there’s six of them! Thankfully, we’ve found them all: one’s near the beginning by a discarded pile of coffee creamers, the next one’s down by the docked ship,  the one after that by some waterwheels, then near a Shy Guy spawn pipe, the next hiding behind some rocks while you’re jumping rope, then the final one just before the mini-boss gate.

Pirate Ship: Not as easy as it sounds! While pirate ships are found all over Pirate Pier, this Flipside Souvenir’s one-of-a-kind. Keep an eye out for a red sail-adorned Pirate Ship just past the second checkpoint.

Steamboat: This Flipside souvenir’s a sneaky one! It’s hiding behind some rocks jutting out of the bay, so simple circle around to spot it. If you’ve already hunted down the Flightless Goonies, keep an eye out for the polka dot-adorned Goonie!

And that’s a wrap for Pirate Pier! Let us know if you have any additional questions via the comments, but in the meantime, check out our Yoshi’s Crafted World guide hub!