Many Fish in the Sea Collectibles (Yoshi’s Crafted World Guide) 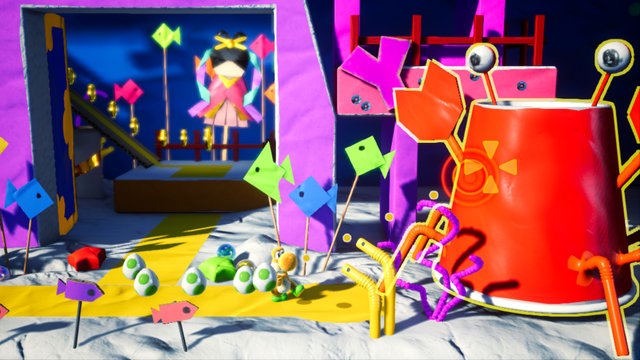 Man, just listen to that chill underwater tune! The soundtrack to Yoshi’s Crafted World is quite pleasant, no? But now’s no time to lay back and soak up the aquatic atmosphere — we’ve got Red Coins, Smiley Flowers, Poochy Pups, and Souvenirs to find within Many Fish in the Sea! 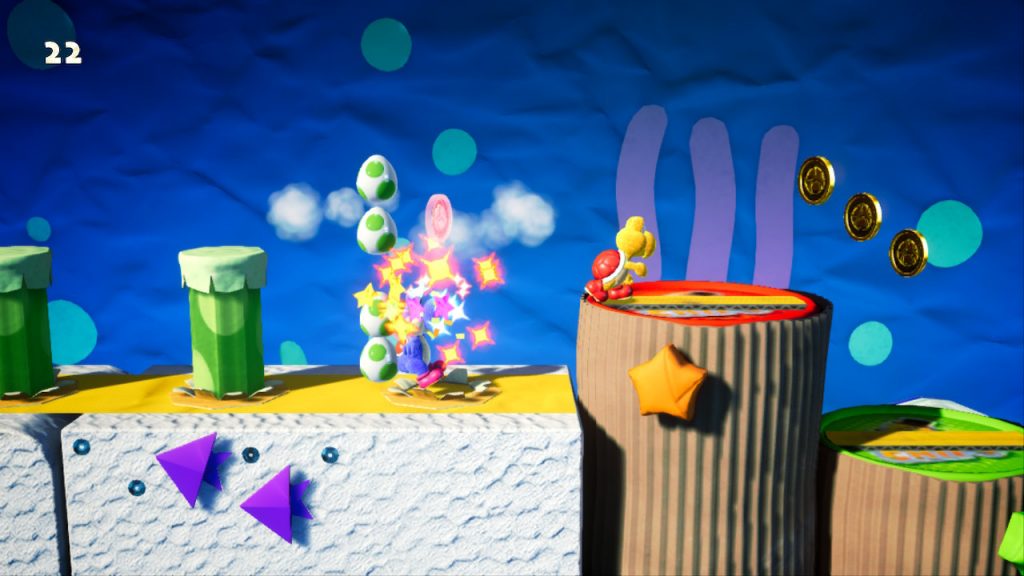 Okay, we know the effects are rather busy up there, but those first three green poles you stumble across? The third one houses your first Red Coin. (1/20) Continue until you encounter a giant clownfish (you know, those orange fish from Finding Nemo) — hop off it or walk under it until you spot two green poles. Climb up the second tall one and Ground Pound it for another Red Coin! (2/20)

Journey on until you reach an elevator in the form of blue fish; right as you exit, wait for the elevator to rise up and then roam the floor under it for a hidden cloud. Smash it open for Red Coins! (6/20) Exit that room, and you’ll eventually meet another clownfish; run under it to find another pole. Ground Pound time! (7/20) As you navigate the pufferfish-operated elevators, a teeny-tiny cave hosting a cloud awaits. Crawl under and pop it for three coins! (10/20)

Afterwards, keep an eye out for a pink-lipped Egg Flower, for a sneaky gold present lies nearby in the background. Ground Pound the next green pole you come across for a proper vantage point, and bop it for a Red Coin! (11/20) Immediately afterwards, you’ll find a hidden cloud underneath the Koopa-occupied platforms; smash the green pole blockade to reach it, and you’ll uncover two Red Coins hidden at the highest platform. (13/20) Next up’s a coin you may earn without realizing it: in the next room awaits a Red Koopa; kick it, and the shell will plow through Shy Guys and a row of the coins, the very last one being a Red Coin. (14/20) 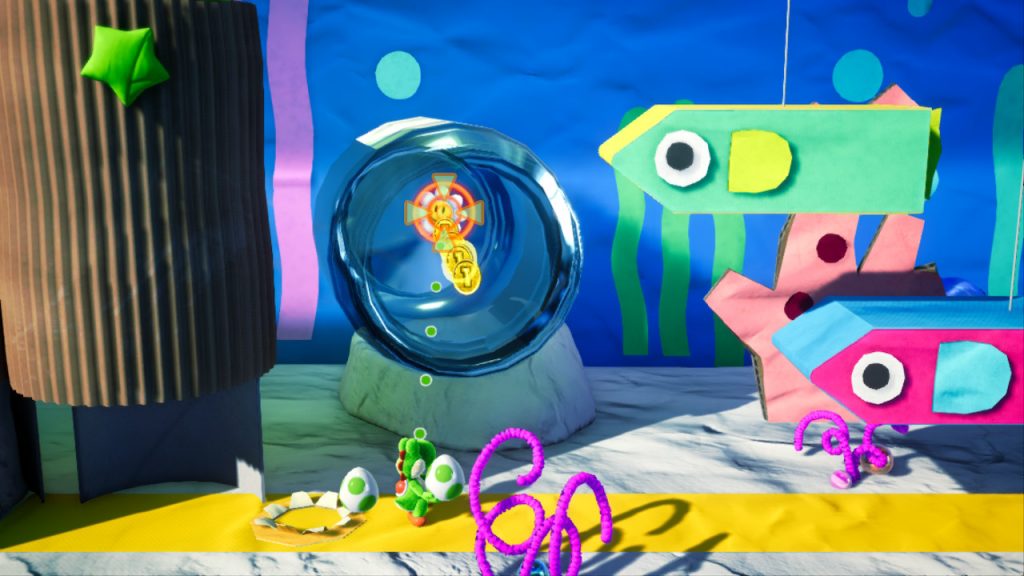 Just five flowers here, and they shouldn’t give you much trouble. First, there’s one hiding in a background bottle by the level’s start — fire away! (1/5) Later, you’ll eventually discover a blue clock-embedded floating cloud hovering above a clownfish. Hit it, and collect all the blue coins in time to score another Smiley Flower. (2/5)

Our third Smiley Flower lies buried in a sequential blockade of blue blocks, found in the room following that of the Red Koopa smash-a-thon. Either ground pound/egg toss your way through, or make clever use of the nearby Koopa to earn it. (3/5) When you later reach the princess’s castle, simply activate the blue clock cloud in front and smash the pink poles in time for your fourth Smiley Flower. (4/5) As for the last one? It’s stowed away in a Shy Guy hidey-hole at the top floor — kick another Koopa shell, and you’re done! (5/5) 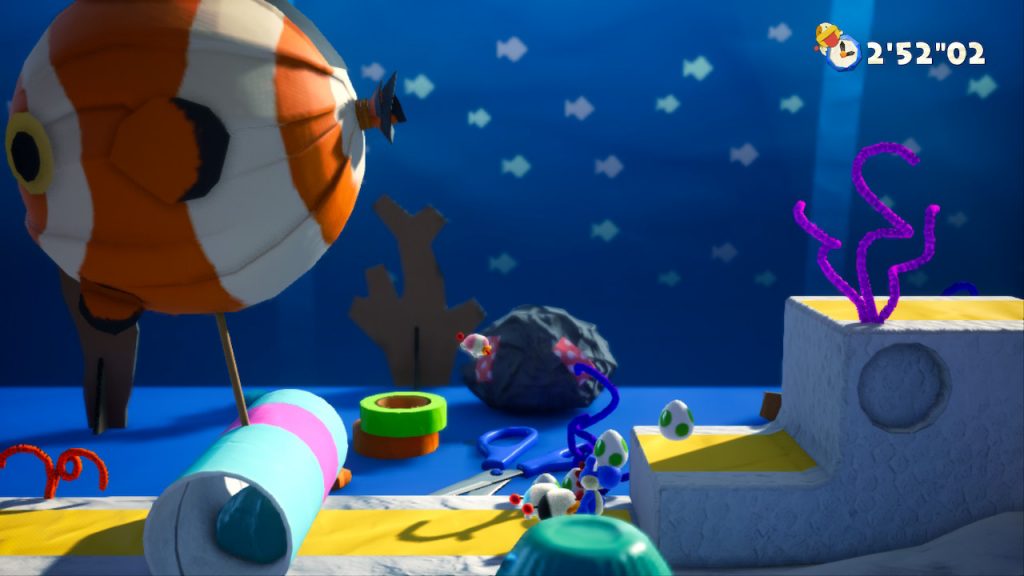 Already those adorable Poochy Pups are up to confounding mischief! While you’ll find the first two easily enough — the first’s on the palace rooftop near the beginning, and the second’s hiding within the blue block blockade —  the third one’s a tricky bugger to catch! Near the end, you’ll hear it barking and may spot it running around in the background, but don’t waste your time throwing eggs. Calmly analyzing your surroundings will reveal its hiding spot/starting point– a pile of tape rolls. Simply follow it along until it hops into your arms. As long as you don’t panic, you should reach the end on time. 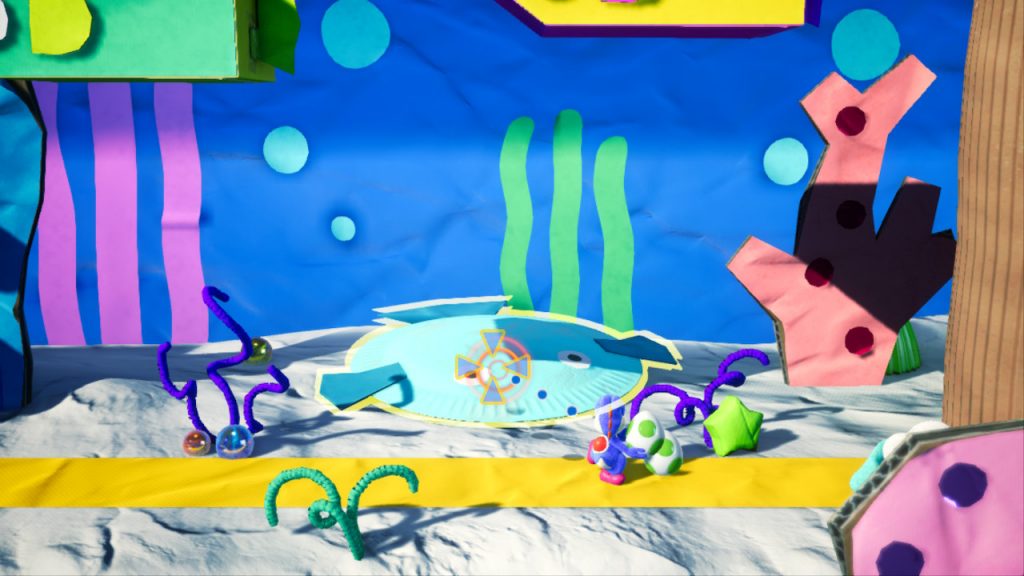 Those Blockafellers don’t know when to stop: yet again, you’re on the hunt for more souvenirs, with four to nab in the underwater depths. While the Flat Flish’s in plain sight, we’ve documented the locations for other papercraft pets in crabs, squids, and purple-striped fish.

Crabs: The first crab’s just chilling by the first Winged Cloud, while the second’s sitting by the pufferfish-operated elevators. As for the last one, it’s just outside the princess’s palace, as seen in the header.

Fish: Owing to their small size, these fish are a tad trickier. The first one’s waiting outside the palace, but careful not to rush or you’ll easily overlook it. The next one’s hiding in the blue block prison with the Poochy Pup, so you’ll need to smash ’em to find it. Following that, keep an eye out for a pink coral tree adorned with fish ornaments, as one’s facing your direction. Afterwards, keep an eye out for Koopa/Shy Guy-occupied platforms blocked by a giant green pole — you’ll need to Ground Pound the latter to reach this fish. Finally, reach the fish elevator room and aim for the fish resting by the green bottle.

Squid: After exiting the room with the pufferfish-powered elevators, hop under the swinging clownfish. This sneaky squid’s hiding out in the foreground! Well, actually, he’s right there, but points for trying!

That’s all for Many Fish in the Sea! Let us know in the comments if you have any additional questions, but in the meantime, check out our Yoshi’s Crafted World guide hub!