A Smashing (and Slashing) Good Time 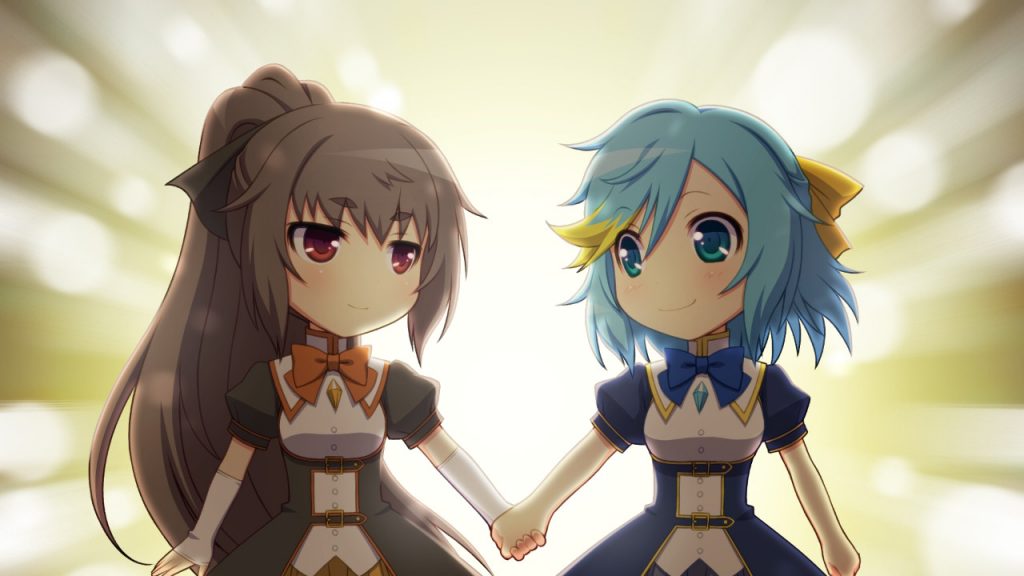 I’ll cut straight to the chase, here; Croixleur Sigma is one of the most cliché games that I’ve played in a long while. Between its magical schoolgirl protagonists, high-speed monster-slaying gameplay, and highly unforgiving difficulty, this is a game that absolutely screams “Japanese arcade stereotype”. But do you know what? That’s not necessarily a bad thing. After all, all of those things are popular for a reason. And, cliché as they may be, they’re all elements which can still add up to a good time if done correctly.

Fortunately, Croixleur Sigma is an example of the kind of “correctness” that I’m talking about. Sure, it’s all been done before. But it shouldn’t matter if iteration after iteration of the same framework gets released at a steady rate, so long as each game is good. And Croixleur Sigma? Well, it’s pretty good. 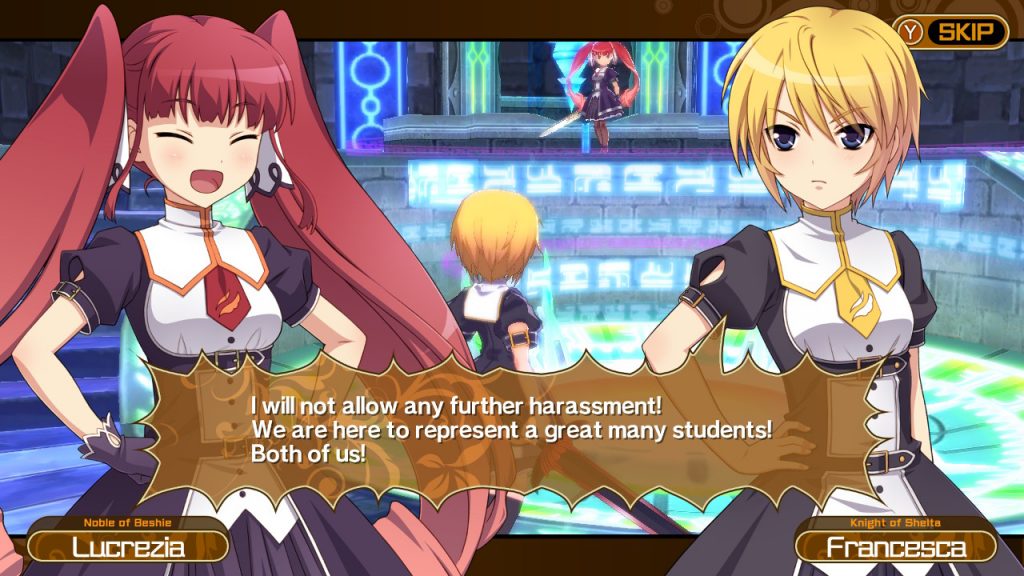 I don’t totally get what’s going on, but count me in anyway!

Okay, so, I’m not exactly sure how to say this tactfully, so I’ll once again just cut to the chase; I’m not totally sure what’s going on in Croixleur Sigma‘s story. From what the game tells you, Croixleur Sigma takes place within the nation of Irance, a land ruled by a kind and powerful queen. Alongside the Queen are two similarly powerful parties — the knights and the nobles. While the two got along at first, they eventually began to fight with one another, resulting in a great amount of strain being put on the nation. However, unbeknownst to either the parties or the queen, a great evil was taking root within the Tower of Nito. …And then four magical girls from the highly prestigious Vernal Academy are sent to check it out, I guess.

I know that the end of that explanation was pretty bad. I feel kind of embarrassed just re-reading it. It’s honestly the best that I can do, though. Despite the rather grandiose ending, I really don’t get why any of the protagonists are there. Two of them seem to be competing against one another to see who is the best, and the other two are locked into some endless struggle that has them supposedly repeating the same events over and over again. Not knowing anything about the game before having reviewed it, I actually thought that this was some sort of spin-off due to how much the player is left to infer on their own, but that doesn’t seem to be the case. The game’s story is just exceedingly vague. In any game even remotely story-driven, this would be an instant deal-breaker. Fortunately, Croixleur Sigma isn’t story-driven. And, because of that, the game’s oddly set up story ended up not bothering me. It confused me, but it didn’t bother me. 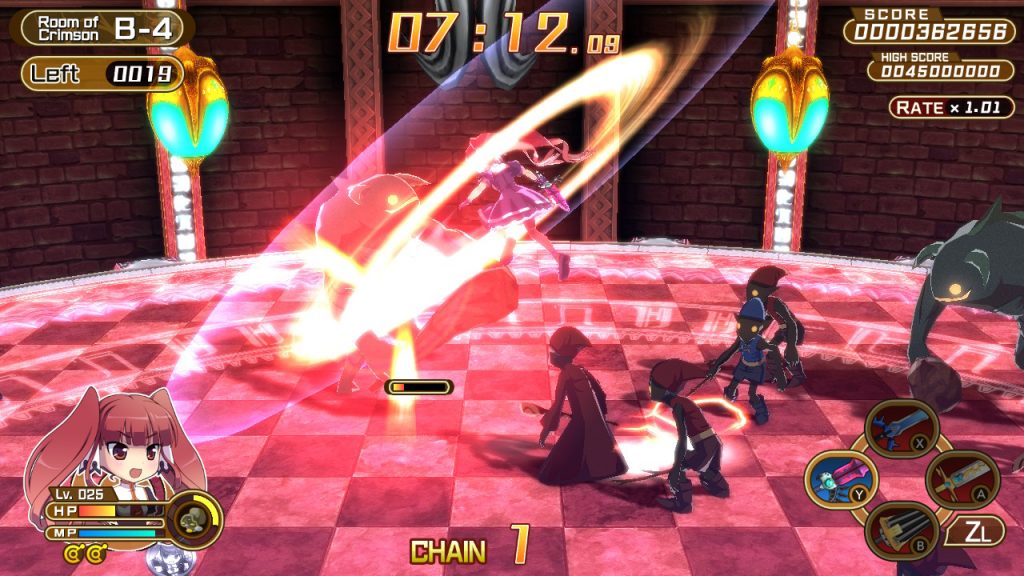 Hit ’em where it hurts! …Which is anywhere, if you’re using a sword.

Croixleur Sigma, as I alluded to at the beginning of this review, could best be described as arcade-like thanks to two of its most prominent qualities; its repetitive simplicity, and its speed. The entirety of this game is spent in one of several circular arenas, in which the players are tasked with slaying any and all monsters that appear as quickly and as skillfully as possible. The mechanics are very straightforward, consisting of ground and aerial combos, a much-needed dash, a “mana burst” which pushes enemies back, and an all-powerful Secret Technique. Additionally, players are able to pick from one of four different characters (depending on the mode), each of whom has versing strengths and weaknesses, and can take with them up to four different weapons, each of which comes with their own special skill. Not only are Croixleur‘s mechanics simple, but the actual gameplay is surprisingly fluid, and even manages to look great as well. I’ll admit that I wasn’t expecting much in the production value department from a game so small, but I’m more than happy to admit that I was wrong on that front.

Now, let’s move onto the actual hacking and slashing. Really, there isn’t much strategy when it comes to offense. Most monsters are fairly weak and conscious chaining of normal and special attacks can make quick work of most of them. Additionally, while your characters don’t stay permanently leveled (you can gain EXP and level up, but drop back down to 1 with each new run), your weapons do. This means, that, if you ever feel like your favorite slicers and dicers are doing too little damage then all they need is some more TLC. Trust me, a few levels go a long way. 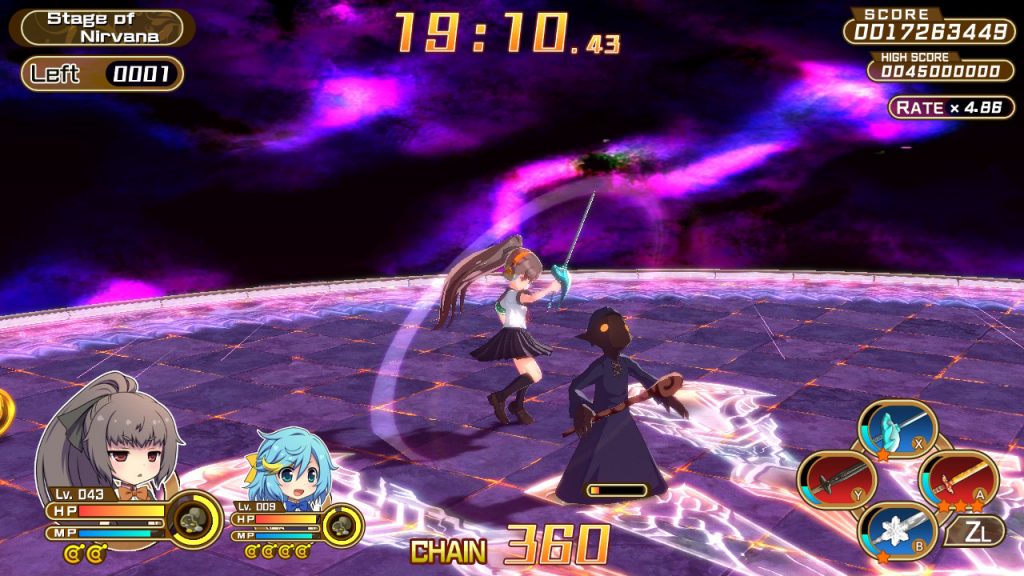 Things are a little more nerve-wracking when it comes to defense. It’s surprisingly hard to stay alive as the game continues on, meaning that you’ll have to learn how to not get hit. And, since there’s no dedicated block button (or any kind of block at all, actually), it all comes down to parries and perfect dodges. By timing your attacks and dodges just right, you can completely negate an enemy attack. Doing that on command is very difficult, and the fact that enemies tend to rush you from off-screen makes it even more so. However, while dodging hits is important for staying alive, it’s even more important for high-score chasers. Each defeated enemy drops coins for the player to collect. These coins can be used to purchase accessories with beneficial effects in the character menu, but they also add to the player’s chain meter within the level. The higher the chain, the more points you rack up. And, as you’ve probably guessed, one single hit will knock you down to 0. Croixleur Sigma really doesn’t pull any punches when it comes to difficulty, and beating that pre-set 45,000,000 high score that’s in each of the Story Mode levels won’t come easy. Much like with anything, however, it does get easier with time  — and more fun, too!

Speaking of Story Mode, there’s one thing that I should mention — the fact that there’s something going on with the Story Mode levels. Story Mode is made up of 4 different levels, spanning about 20 minutes each. They’re hard, with some even placing endurance meters on your weapons, and it takes some effort to beat them — which is exactly why I was upset to find my game crashing whenever I beat Level 3. Now, I’m going to let you in on a little secret, dear reader — finding a bug in a preview copy isn’t strange. Because of that, I’m fairly lenient whenever I find a small hiccup here and there. I assume that they’ll get fixed, and they usually do. This isn’t a “small hiccup”, however. It’s more of a big… well, let’s just say that it’s bad And it’s not something that I can overlook. Do I think it will get patched? Almost definitely. But I can’t not talk about it. Preview copy or not, this is a big deal — the game is currently, and quite literally, unbeatable for me I’m not going to completely damn the game, but I also won’t pretend that it doesn’t exist.So, if you’re wondering where this game’s score came from despite it receiving praise in nearly every other aspect then you can consider your curiosity slated. 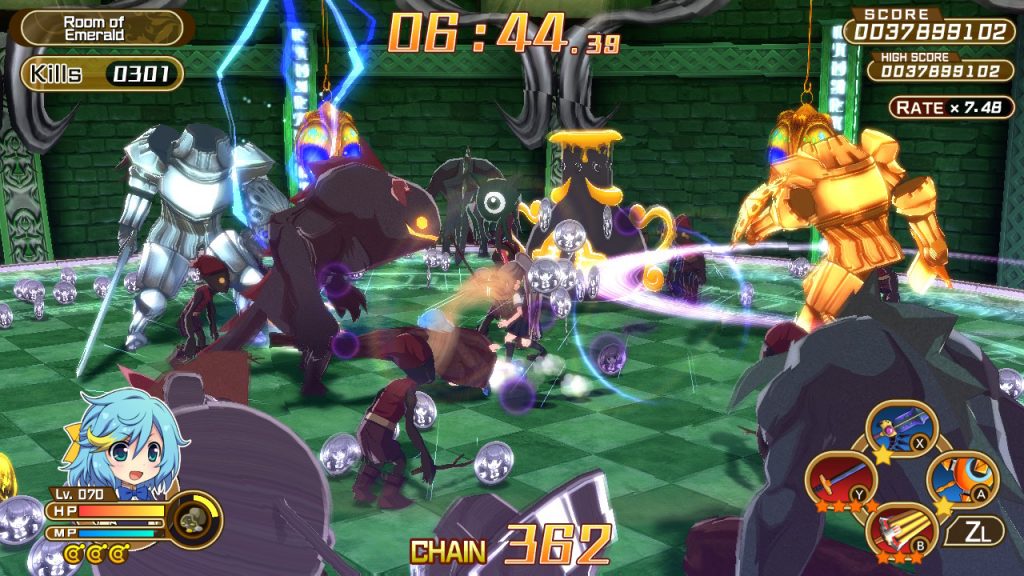 O-okay guys, I got a high score. You can stop swarming me now. …Guys?

Story Mode (or what’s accessible of it) may be the driving force behind this game but it’s not the only thing that it’s got going for it. Croixleur also features a number of additional modes, all of which are perfect for a game like this one. Unsteady on your feet? Training Mode’s got your back. Want to see just how good you really are? Aim for a top score in Survival and Time Attack Mode, or try to tackle some of the Challenge Mode Challenges. Heck, there’s even an Extra Mode, which lets you see a nice little post-game prologue. While none of these features offer enough to help get Croixleur Sigma out of the “shallow” territory in terms of overall length, an extra bit of content is still nice.

I’d like to end this review on a high note, by ending on a high note. Taking into consideration what I’ve played of the game, and assuming that its lingering issue is going to get patched, Croixleur Sigma really is a great little game. While it doesn’t have much going on in terms of actual depth of content, what it does have is a lot of fun. If you’re looking for a cute and challenging way to have some arcade-like fun, and don’t mind having your reflexes and ability to remain calm put to the test, then this game might be worth your time. $19.99 might be a little steep, but you could still do a lot worse than a game like Croixleur Sigma.

Full disclosure: This review is based on a copy of Croixleur Sigma given to Hey Poor Player by the publisher.

Paul Pixel can save the world, but not his own game. What can be truly be said about Paul Pixel? Unfortunately not a lot, and what can actually be…