An Eternity of Frustration 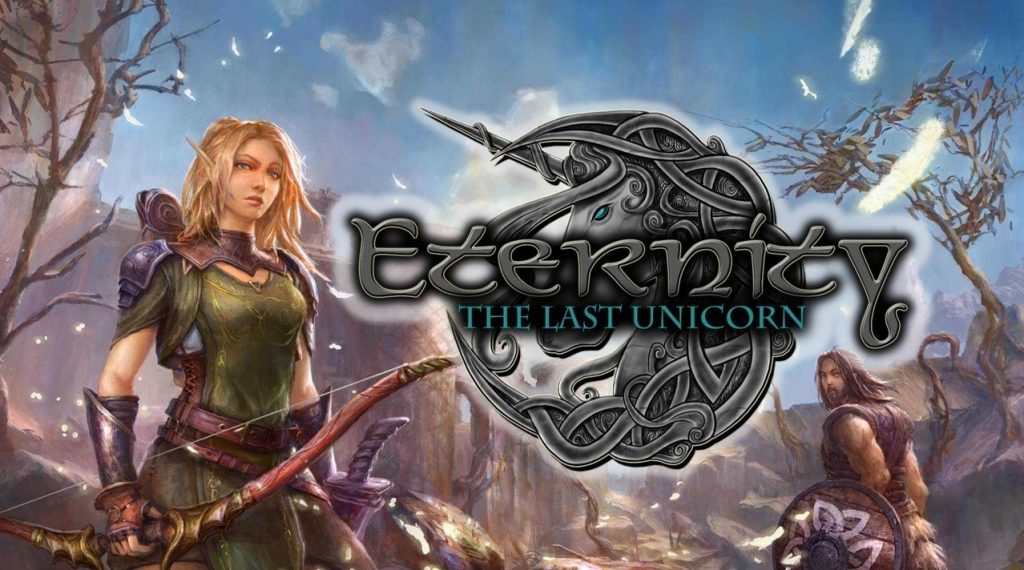 It’s been a while since I’ve played a game this unintentionally frustrating. I know that probably isn’t the most encouraging way to start out a review, but there’s really no better way that I can think of. I went into Eternity: The Last Unicorn with middlingly positive expectations. It seemed like a nice classically inspired 3D adventure game with a unique enough premise. At first, I thought that my expectations were spot-on. However, the more I played, the more I realized that I was wrong — and not the good kind of wrong, either.

I don’t really like calling games “bad”, because even an opinion trying to be as objective as possible, such as the one in this review, still holds onto an element of subjectivity. So, while I won’t say that this game is bad, I will say that it’s doing several important things incorrectly. There are so many parts of this game that feel halfhearted, and I’m getting frustrated just remembering some of them. Me sitting here thinking about the game won’t help you, though, so let’s get onto the review.

Reclaiming What is Lost 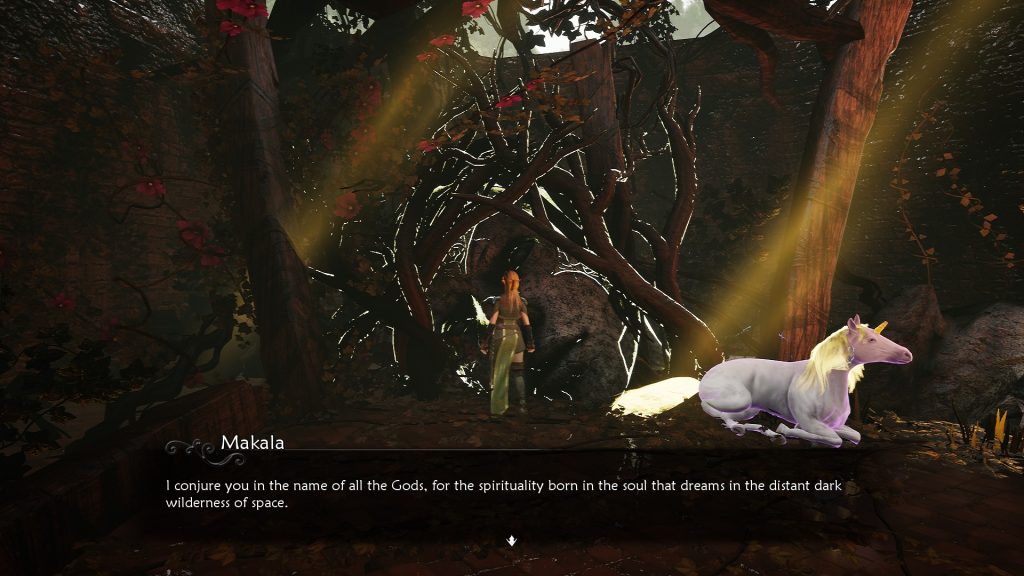 No one ever said that being immortal is easy.

Eternity: The Last Unicorn‘s story follows Aurehen, a young elf who of whom prophecies spoke of being a hero, on her quest to save a mystical unicorn who, as the name of the game implies, is the last of its kind. Although once accompanied by several others, collectively bestowing immortality upon elfkind, all of the unicorns save one have completely vanished, with the one remaining suffering from a broken, and thereby magically devoid, horn. Thus the Elves, fearing for their lives for the first time ever, have sent out Aurehen, their one-and-only hero, in a final, desperate attempt to save the immortality which they have coveted for so long.

All-in-all, there really isn’t that much to say about Eternity‘s story. Aside from the immortality-bestowing unicorns — something which I honestly don’t think that I’ve seen in a game before — most of Eternity‘s story could be defined as “high fantasy mishmash” You’ve got Elves, Vikings (which are actually kind of unique), dwarves, and a plot revolving around stopping dark magic. I know that it sounds like I’m being dismissive about everything, here, but I promise that I’m not doing it to be mean. Minor quirks aside, most everything has been done before. While I was initially intrigued by the story, I quickly found myself caring about it less and less. There’s no narrative oomph in this game, and, due to how lore-heavy the high fantasy genre is, it’s almost a requirement that you make it as interesting as possible. If not, well, your players will get bored with your story quickly. And me? I got bored quickly. 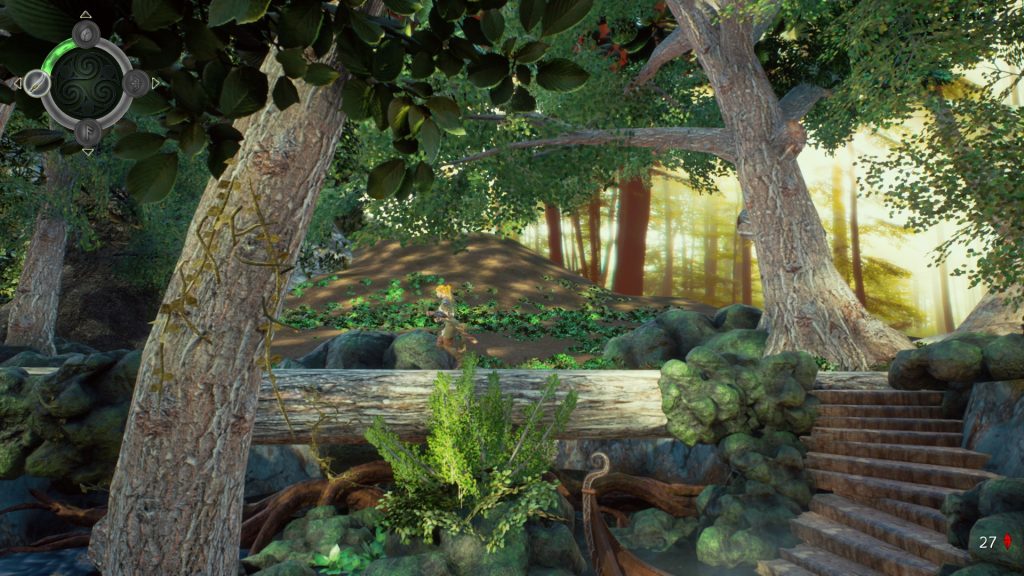 Enjoy the calm while it lasts!

It’s easy to see from the get-go what direction Eternity is trying to head in when it comes to its gameplay. Borrowing heavily from old-school PS1 and PC adventure games, Eternity attempts to present itself as a love letter to the many adventure games which came before it. To its credit, it gets this process somewhat right. By relying heavily on a highly linear progression formula and mixing in a large dose of fixed camera angles, this game really does feel like something out of the 90s. Unfortunately, it might have copied that old-school formula a little too well — especially when it comes to the cameras (and perhaps the graphics, too). Games featuring fixed cameras were never my favorite, but I don’t mind them at all if they’re done correctly. Unfortunately, Eternity‘s aren’t. All of the problems inherent within the use of fixed cameras were there. Suddenly having your character turn around and walk in a different direction after switching angles? Check. Making certain items and pathways easy to overlook? Double-check. Sure, that’s a pretty short list, but that shouldn’t really matter. These problems have always been present with games like this, and, while Eternity is doing its best to stick to an old-school formula, it shouldn’t have done it to this degree.

Eternity also follows another retro trope; dual protagonists. There isn’t anything wrong with that on its own, of course, but this game once presents it as an element which doesn’t necessarily live up to its potential. Although the game begins with Aurehen, players eventually rescue and then play as the Viking Bior. Given that these two characters are noticeably different from one another — one being a lithe elf, and the other a burly Viking — I expected them to play differently. They don’t. Switching between characters (which the game does for you, I might add) does mix up the gameplay to keep it from being less linear, but it doesn’t really feel as though you’re playing as two different characters. Sure, you eventually ability-bestowing items which help to differentiate the two, but it still isn’t enough. 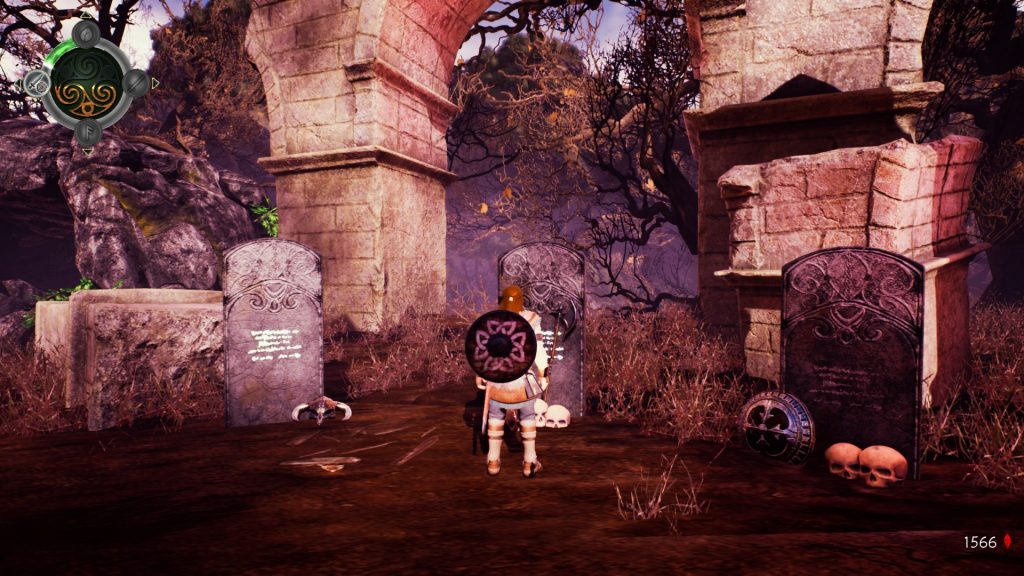 Praying to gravestones to unlock a door? It’s more fun than you’d think!

I hate being all doom and gloom when it comes to writing reviews (or anything, really), so we’re going to hop on over to something that this game did well — puzzles! Scattered throughout the game are a number of puzzles which must be solved in order to continue progression. Seeing as I’ve already heavily harped on other parts of the game, you might think that the puzzles ended up being less-than-stellar, too, but they weren’t! Puzzles are always a tricky addition to an adventure game. Make them too easy, and they might as well not be there. Make them too hard, and you’re detracting from the actual focus of the game. But Eternity: The Last Unicorn? It hit that sweet spot. None of the game’s puzzles ever take that long, but they aren’t entirely mindless. They’re light and fun and still have substance. And, while good puzzles still aren’t enough to counterbalance everything else that I’ve talked about, they still deserve proper recognition. 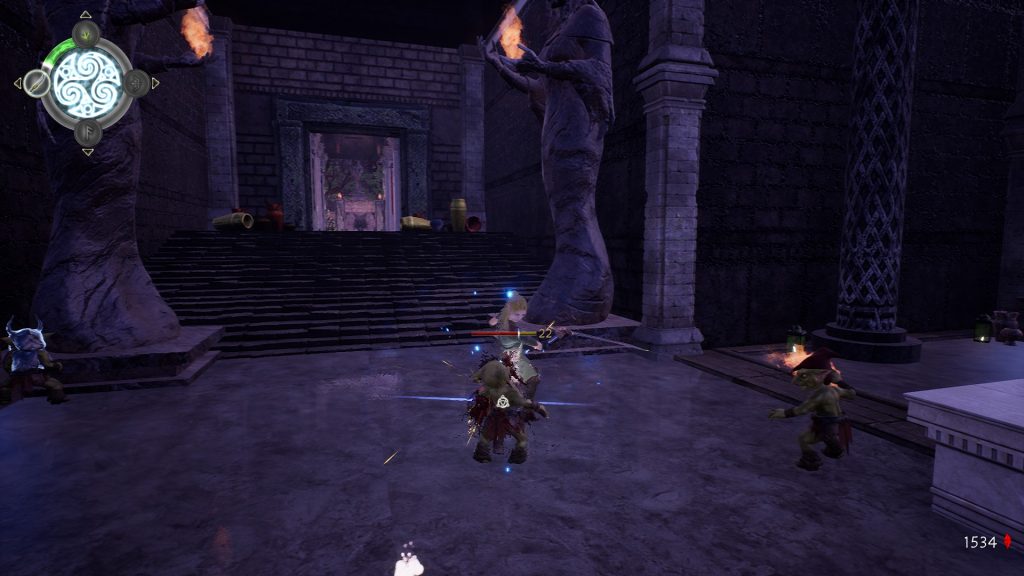 It’s best to fight like you’re in a constant state of near-death, because you basically always are.

As unpleasant as Eternity‘s limiting camera angles and lukewarm dual protagonist use are, they’ve got nothing on the game’s combat. I really wish that I could say that I was being hyperbolic with that statement, but if I did then I would be lying. Combat is difficult. Very difficult. But not for the right reasons. I’m all for dying against an enemy because I wasn’t skilled enough to take them down, but what I’m not okay with is dying to an enemy because of bad controls. And, while I hesitated to call the game in its entirety bad, I have no issue with calling out the controls in that manner. Ironically, combat itself is very easy. Both characters have light and heavy attacks, as well as a dodge, a special AoE attack, and unique abilities which they either start with — such as Bior’s shield — or pick up later on — such as Aurehen’s bow. Often times, games with control schemes as simple as this one rely heavily on things like the player’s reaction time and overall competency. Eternity does that too. Unfortunately, its controls set the player up for failure. I’m not even sure how to describe the controls, in all honesty, other than by calling them “clunky”. Everything feels way too deliberate, and unless you’re up against a big, slow enemy, there’s almost no time to play defensively. A game like this should ensure that players are able to move fluidly, it’s seriously one of the most important things, and not having that is a huge overall detractor.

Then, there are the enemies themselves. Remember how I said that the game was kind of linear? Well, I meant that more literally than you might have thought. Most areas in this game don’t have a whole lot of room for players to move around in. Coincidentally, most areas also have a lot of enemies in them. It’s probably obvious what I’m getting at by now, but I’ll spell it out anyway; you can get trapped in this game so, so easily. Both characters are also incredibly fragile, meaning that getting backed into a corner is essentially a death sentence. I can’t tell you how many times I’ve died simply because I don’t have enough room to move around in, resulting in a gaggle of impassible enemies swarming me. To make matters worse, some of the enemies seem to literally be broken. I’ve died at least half a dozen times due to the fact that, after getting hit, my character becomes incapable of doing anything save walking slowly. And no, it isn’t due to a status ailment. I’ve checked, trust me. While I can’t tell you what triggers this “bug”, I can tell you that it’s very frustrating. And, when combined with the already high combat difficulty, Eternity reaches a level of artificial difficulty that’s all but guaranteed to drive you mad.

Eternity: The Last Unicorn tries. And I really commend it for that. But that’s really the best compliment that I can give it because there’s honestly not a whole lot else going on. Between its clunky gameplay, maddening combat, and overall unreliability, there’s much to be desired from a game like this. The game may be called Eternity, but I certainly don’t see it sticking around for that long.

Full disclosure: This review is based on a copy of Eternity: The Last Unicorn given to Hey Poor Player by the publisher.