Little kids and guns? You ain’t seen nothing yet. 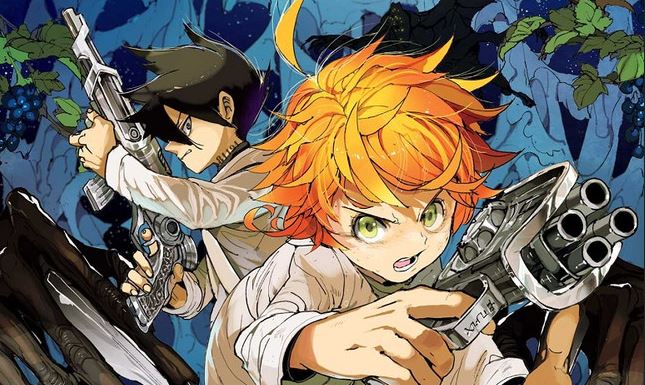 As anyone who’s engaged with any and all media knows, it is the destiny of the crotchety old man to open up and bare the bleeding heart he possessed all along. While The Promised Neverland‘s mysterious “Geezer” — the eccentric lone-wolf antagonizing Emma and Ray — is certainly far younger than those stereotypes, he fits the rest of the requirements: bitterly aloof, constantly vocalizes desires to be left alone, hints at a tragic past, and yes, perhaps seeing too much of himself in these bright-eyed youngsters. In adherence to this formula, he attempts to push the Grace Field escapees out of his life, but he takes it a step farther by, uh, making them fall prey to wild man-eating demons.

For anyone captivated with The Promised Neverland‘s genre-defying suspense and its consistent success at circumventing our expectations, that the series falls upon such a predictable storytelling device may be a disappointment, but as writer Kaiu Shirai certainly knows, it’s how you performed tired cliches that draws us again and again. We covered last time how The Man’s own brand of pessimism must outwit the respective qualities of Emma and Ray — optimism and pragmatism, for those of you just joining us — plays into speculator tension, not to mention how he expertly plays into the series’ compelling mysteries via PTSD flashbacks, further unraveling his psyche for us to prod at. (That, and okay, we certainly know Emma and Ray won’t get chomped, but given that The Man would resort to something so messed up even by series standards — a series which, as a reminder, undertakes drastic lengths to keep our attention rapt — leaves us little choice but to further witness how far he’ll go.)

Still, some may proclaim you can only take cliches so far; thankfully, The Promised Neverland agrees, and when Emma calls out The Man on his bluff, said prodding has us realize his purpose. Thinking back to The Man as a “failed” Emma, we’re treated to a chilling contrast between the two characters. What ensues is not dispelled tension or Emma miraculously reaching his conscience, but a grim reminder of what Emma could become should her failures sacrifice others; in the other words, The Man represents the worst of Ray’s pragmatism succeeding a dead Emma — a self-preserving husk burdened by miscarried idealism. (And on that note, we also ponder if he accurately represents a future Ray left to his own devices.)

Does The Man begin to crack? Yes, but the ensuing split between Emma and Ray/The Man voids any radical character development by veering the spotlight from him into Emma’s new predicament: the child-hunting hellscape of Goldy Pond. With Emma on the run and Ray/The Man chasing after the Poachers, we bounce back and forth between two conflicts: Emma uncovering a shocking new conspiracy and The Man’s wavering moral compass clashing with Ray’s abandoned sobriety. It’s possibly the most effective storytelling shift The Promised Neverland has yet initiated: how, exactly, The Man will begin his journey of redemption remains unknown, yet we exit this volume energized in the knowledge he’ll exact revenge on the demonic proprietors responsible for ruining his life. 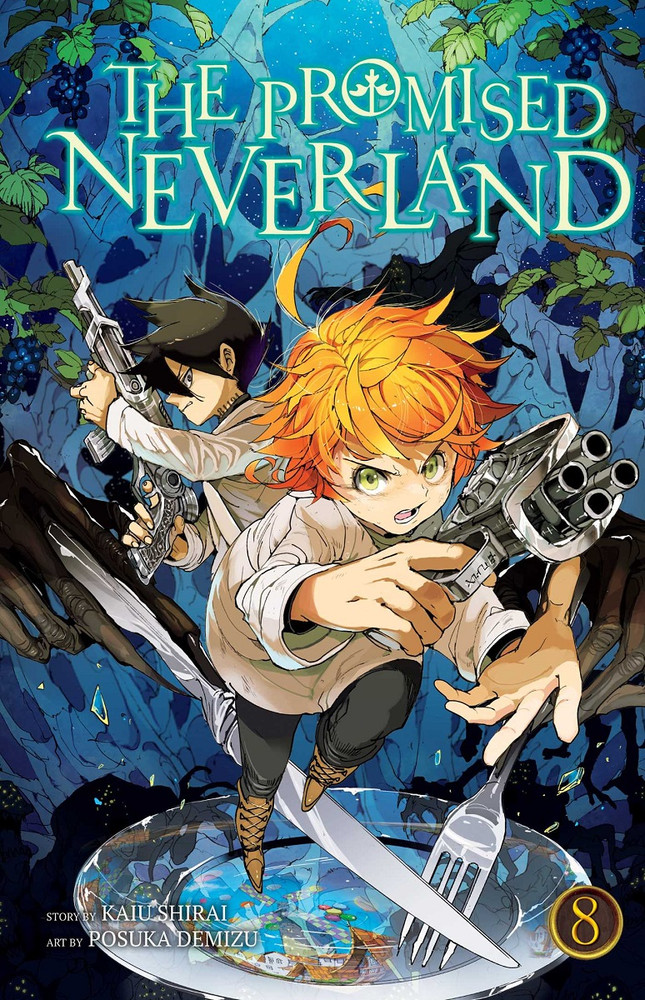 Sadly, this must occur after the ensuing macabre: Goldy Pond, a secret amusement ground for demons to hunt down freshly-shipped children,  is but the latest heart-breaking tragedy of The Promised Neverland‘s cruel world. Artist Posuka Demizu has already performed an immaculate job at juxtaposing the sweet, fragile innocence of childhood demonic horrors, but this faux-amusement park is her first take on a happy-smiley masquerade — always the most terrifying of horror setpieces — and the results are nothing less than terrifying. With Jump restrictions being what they are, we obviously aren’t privy to tykes being cleaved in half, but by the time the demons have had their fill, we’ve witnessed more bloodsplatters than we care to witness.

Barring Emma and Norman’s discovery of Conny back in the first chapter, the ever-looming threat of demon consumption has only largely defined their peril as opposed to maintaining an overtly active presence; terrible as Grace Field’s secret was, it’s not as if demons prowled its halls or Mother Isabella murdered the orphans in their sleep. Grim as it is, Goldy Pond is The Promised Neverland‘s necessary reminder of what Emma and co. are up against: failure means death. Her failure is a hard one to swallow, but it’s certainly not one that’ll beat her down; if anything, the presence of a rebellion of other beaten-down kids is all the more proof she can make it. That we, yet again, conclude on another cliffhanger — this time regarding the elusive Mr. Minerva — ensures we remain gripped within The Promised Neverland‘s ghastly clutches. Bleak, but never hopeless: that’s the key behind its success.