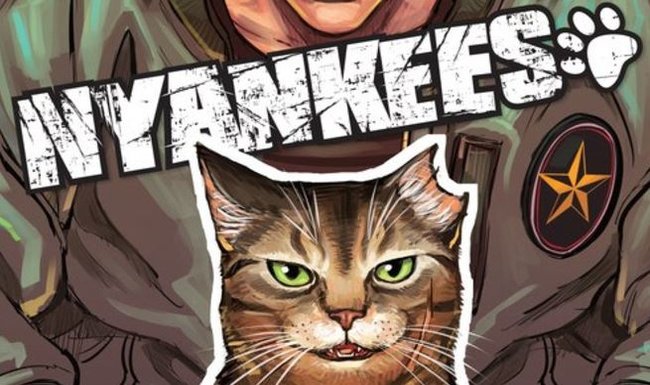 Call it my crazy cat bias, but Nyankees possesses the most arresting visual premise I’ve recently encountered in manga. The title’s joke referencing its core premise of “Japanese cats acting like yankees” (“Nyaa” being Japanese for “meow”), the fluctuation of stray cats visualizing themselves as rough-and-tumble gangsters invokes a compelling contradiction of adorable grittiness. Upon further introspection, however, perhaps it’s more that we bleeding-heart cat lovers would rather not dwell upon the reality of homeless kitties – fascinated as we are with any stray/feral cats we happen across, we recoil at the thought of any outdoor hardships. Are they solitary? Do they have shelter? Can they find food?

Granted, I doubt Nyankees provides a particularly accurate answer, but the misadventures of dark tabby Ryuusei and his gang brawls plays upon a fun gimmick, regardless. The two perspectives expertly flip on a dime — while much of the focus and drama is focused on their gangster personas, they shift back into cats for comedy and wholesome moments of companionship. As anyone familiar with cats knows, they are mischievous, curious creatures, and staple peculiarities like their box obsessions and food distractions make for entertaining vignettes. However, the love that newcomer writer/artist Atsushi Okada clearly possesses for cats compels him to stretch past the basics, with our first volume littered with more subtle, careful means in imbuing human – or should we say delinquent — traits into furry felines. For instance, with cat gangsters hanging out in dank alleyways, how can we depict cats imprinting wall graffiti? The answer’s hardly spotlighted, but careful attention to the background will score some laughs.

Not that Nyankees isn’t entirely comedy – Ryuusei is hardly distinguishable from any bone-headed, skirt-chasing (tail-chasing?) shonen hero, but after chapter one eases into the cat/human juxtaposition, we’re entertained merely through his vagabond antics mirroring that of an actual cat. Putting it this way: Ryuusei’s tomfoolery, Taiga’s stern ethics, and Mii’s motherliness don’t have to enchant us right away, with the core visual concept already putting in work. Of course, Okada can’t afford in letting that run out of steam, and so character development eventually takes the mantle — it takes time for Ryuusei to open up, but his gradual respect for Taiga forges a heartwarming kinship sealed by a common, beloved cat greeting.

Admittedly, we still don’t quite know what makes Ryuusei tick — amidst all the turf wars and flirting, he’s driven only by his search for a calico from his past. The “why” remains unknown, but Okada’s art allows for easy sympathy — he perfectly captures the wide-eyed curiosity and content coziness that so attracts us to cats, with one chapter’s ending shot of cat Ryusei expressing a dilated stare of longing being so sweet-faced that we’re instantly on his side. By the volume’s ending cliffhanger, we’re intrigued to learn his history and, by association, anticipate the next volume.

Going by those scars, he’s clearly used up some of his nine lives. 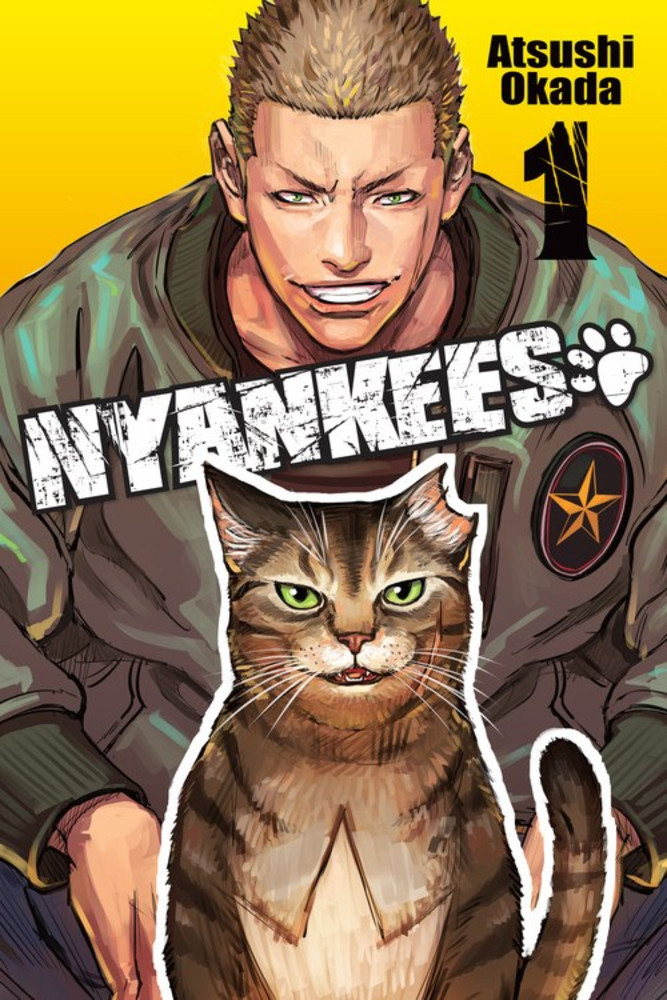 Regardless, with Nyankees’s Shonen Ace origins aimed for older audiences, not every cat lover may find themselves engaged. This isn’t to say Nyankees is especially dark despite the gang setting – the catfights are primarily presented in human-form, with the actual scratching and hissing typically played for laughs – but that our one and only female character in Mii is instantly sexualized may grant some readers pause. Granted, that it plays into feral cat nature – right down to Ryuusei’s, um, “stimulated” genitals (“I’m gonna bust a nut!”) — might provide an easy overlook, but this delicate balance between man and cat is…well, I suppose that’s a rabbit hole I’m not about to explore, but it’s right there.

By the way, have I mentioned how much I adore this localization? Surely “I’ve never felt jellybean toes that stung as much as his” wasn’t in the original script, but it proves Yen Press engages the same passion Okada presents with the material. Cat puns exist, yes, but they’re never overbearing and let the drama scenes breathe with coherent prose. And in typical Yen Press-fashion, helpful annotations and a Translation Notes glossary are peppered throughout for those unfamiliar with cat lingo/Japanese terminology. (For cat fans seeking to expand their breadth of knowledge, I highly suggest you pay attention to the latter.)

Nyankees debuts in a solid first volume: its six chapters are primarily concerned with light exposition, yet it maintains a calculated build-up in retaining our interest. An on-going series with four volumes released thus far in Japan, it remains to be seen whether the series will embark upon an introspective journey or simply settle for a silly, raunchy yarn with a touch of heart, but I’m charmed enough by its cast to continue reading. Not purrfect, and I suspect it’s still finding its meow, but Okada’s talent paws through.

Full Disclosure: This review was based on a retail copy.