The road to Hell is paved with good intentions. 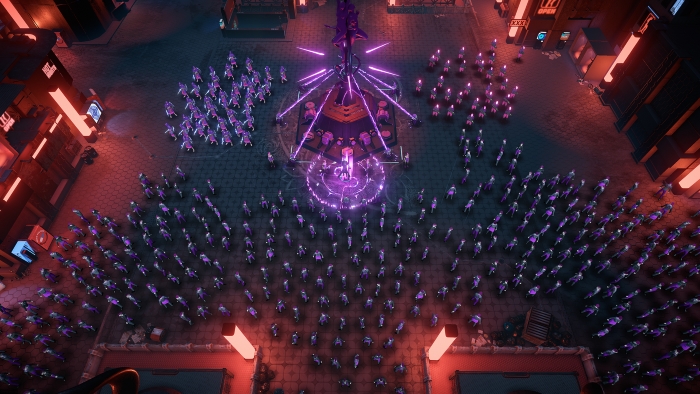 In the original Age Of Empires, one of the most memorable missions involved using a lone Babylonian priest to build an entire nation and army through the process of conversion. Even in that game’s skirmishes, using priests to build an army of converts is a risky yet satisfying tactic. It left a few of us wondering: what would it be like if an RTS was built around that premise? We have that answer in the indie RTS that is Re-Legion.

Though Age Of Empires was set in ancient times, Re-Legion takes place in the 22nd century. In this future world, humanity has reached a spiritual breaking point. Technological advances and mechanization of the work sector has left society bored, angry, and almost completely without any sense of purpose. Along comes a fellow named Elion, who just happens to be an extremely charismatic guy with a messianic complex. As in previous centuries, desperate people find solace in Elion’s teachings, and it’s not long before he gathers a sizable following. Together with his cohorts and devotees, Elion vows to challenge the prevailing social order, take down the corporatocracy ruling the world, and even wage war with rival cults to become the biggest religion ever. Will your religion go down in the ages as a turning point in humanity, or will you simply be another cult that, like most, dies out within its first year? 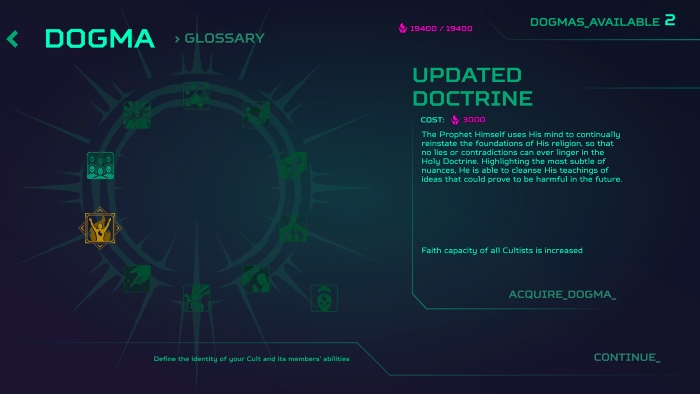 Players wander the world as Elion and gain followers and sympathizers. There are no barracks to construct and no soldiers to train; instead, your army consists of everyday people who are converted to your cause after listening to a bit of preaching. These converts will then respond to your orders, no matter how reckless, and will gleefully martyr themselves by running into oncoming fire. The idea of reducing a strategy game’s economy to soldiers is not unheard of; players familiar with other minimal RTSes, such as Auralux and Eufloria, will find the concept very similar indeed. Take heed however that not everybody in this cyberpunk dystopia will be receptive to your message. Those resistant to conversion will unfortunately have to be disposed of, as Elion’s plans make no accommodation for non-believers. It’s an ugly necessity and tragically a reflection of the real world.

So what’s a wayward prophet to do in order to maximize the uptake of converts? Refine your methods, of course, and here’s where the game takes a distinctly RPG approach. Earn points, spend them, and you’ll be better able to inflict all manner of theological mayhem in the form of new upgrades. These benefits have a wide range of effects, from Elion’s power of persuasion to the strength of your disciples. And your disciples need all the help they can get, as they’re none too bright and require a degree of micromanagement not seen in an RTS for decades. 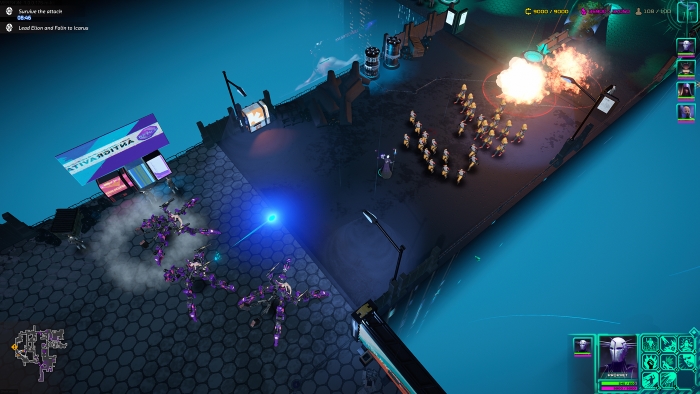 Sadly, for the amount of micromanagement needed, the UI is lacking. It seems to try to emulate the ones found in the Command & Conquer series, but falls rather short. In addition, player control of the units is lacking and the hotkeys leave a bit to be desired. This doesn’t help by being compounded with the game’s rather dodgy pathfinding. Veteran RTS fans will also miss the lack of advanced formation options: all of this would go very far in making Re-Legion a movement to be reckoned with.

My personal pet peeve is the lack of multiplayer options. Re-Legion, despite the various warts and shortcomings, would be an absolute stoker with friends. Think of it: two cult leaders fighting one another and waging holy war as countless minions die and lay waste to the dystopian metropolis. Let’s hope future patches, and perhaps even DLC, will remedy these glaring issues and help to flesh out the game’s fascinating premise. As it stands, Re-Legion is a fine experience with a few teething problems here and there that nonetheless helps to sate one’s craving for new real-time strategy experiences, if only temporarily.

Re-Legion is a damn good idea and an interesting take on the stagnant RTS genre. It has a few bugs, and it’s a bit rough around the edges, but it has (excuse the pun) a lot of soul. For strategy fans seeking something familiar-yet-distinct to sink their teeth into, this game may very be worth a playthrough or two. Fans of Syndicate may also appreciate the assorted homages. Either way, if you see this game in your future, then you need to click on here to download it right now for your Steam library. It’s the only way to happiness, my child.

Full disclosure: this review is based on a Steam key for Re-Legion provided for Hey Poor Player by the publisher.