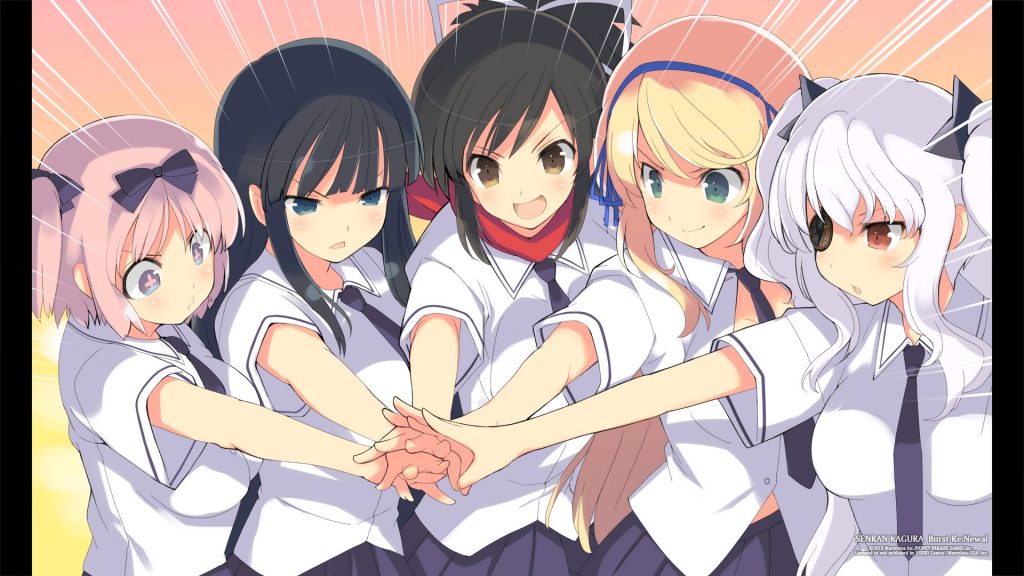 I’m going to let you in on a little secret — I think that the main series Senran Kagura games are better than the spin-offs. Sure, games like Shinovi Versus and Estival Versus have more characters for players to play as, but they just don’t have the depth that Burst and Deep Crimson had. Those two games were a long time ago, however, and I’ve since gotten used to Senran Kagura being about wacky antics, water gun fights, and jiggling, giggling ninja girls (although when was it not ever about that?). Then, I got to play Senran Kagura Burst Re:Newal — and that’s all it took to remind me of just how good the mainline games are.

I won’t deny for a minute that Senran Kagura Burst Re:Newal has all of the shamelessly over-the-top pandering and fan service that it’s always had (even more than the original Burst, actually), but there’s more to this game than short skirts, low tops, and physically impossible proportions. I know, I know, that might sound like a lie, but it’s true.  There really is more going on with this game — whether it be the story or gameplay — than you’d think, making for not only a surprisingly competent beat-em-up title, but also for the best example of what this series has to offer thus far.

Beyond Good and Evil 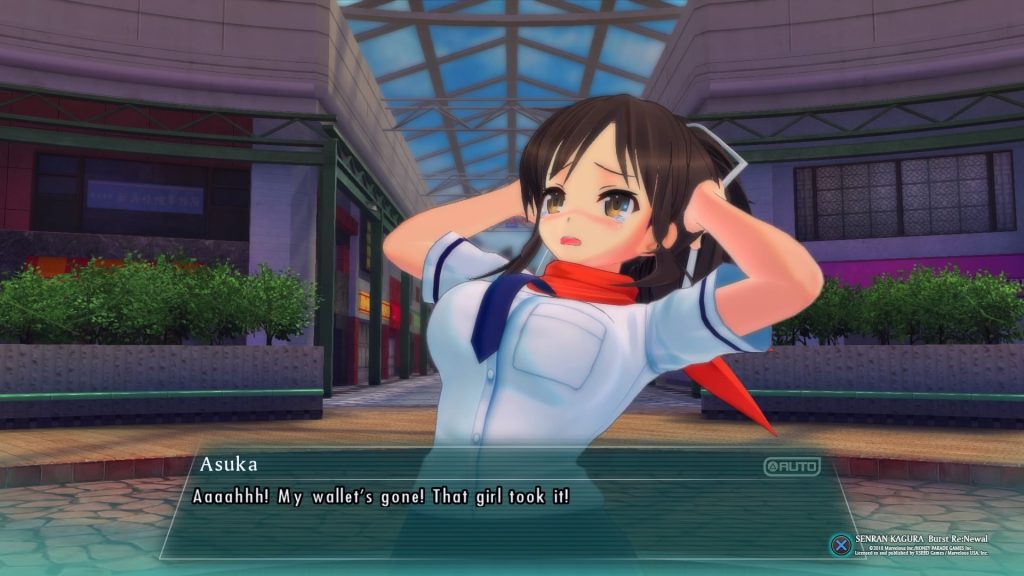 Things are going to get way worse for you than this, friend!

A remake of Senran Kagura Burst, which itself was a remake of Senran Kagura: Portrait of Girls (both of which were 3DS titles), Burst Re:Newal serves as an introduction to the series. Taking place within the prestigious Hanzō National Academy, the game follows the story of a girl named Asuka and her four fellow classmates as they train to become what are known as “good Shinobi” — Shinobi hired by the government which undertake top-secret missions in order to uphold peace and justice — and get into a handful of charmingly comical situations along the way. Of course, as we all know, there is no good without evil, and, sure enough, Hanzō soon finds itself entangled in a battle with Homura & co. of the Hebijo Clandestine Girls’ Academy — a school dedicated to raising evil Shinobi — setting in place a series of events which will challenge them not only physically and mentally, but philosophically as well.

Also present within the game is the “Burst” storyline, originally added in Senran Kagura Burst, which catalogs the events of the game form the perspective of the evil Shinobi. Mostly. Despite simply being labeled as a switch in perspectives, the Burst storyline could almost be considered to be an alternate version of the original game’s events. While they still follow the same general narrative flow, and key story points align, there seem to be a number of events which occur, and even relationships which form, that don’t entirely match up with how things went down during the main story. Or, if they’re supposed to, then they weren’t clear enough for me to catch on to.  I do find this odd —  I’m not sure why they couldn’t have made the stories feel cohesive with one another — but I won’t deny that this alternate version stands up just as well as its original counterpart in every way possible (other than the continuity thing). 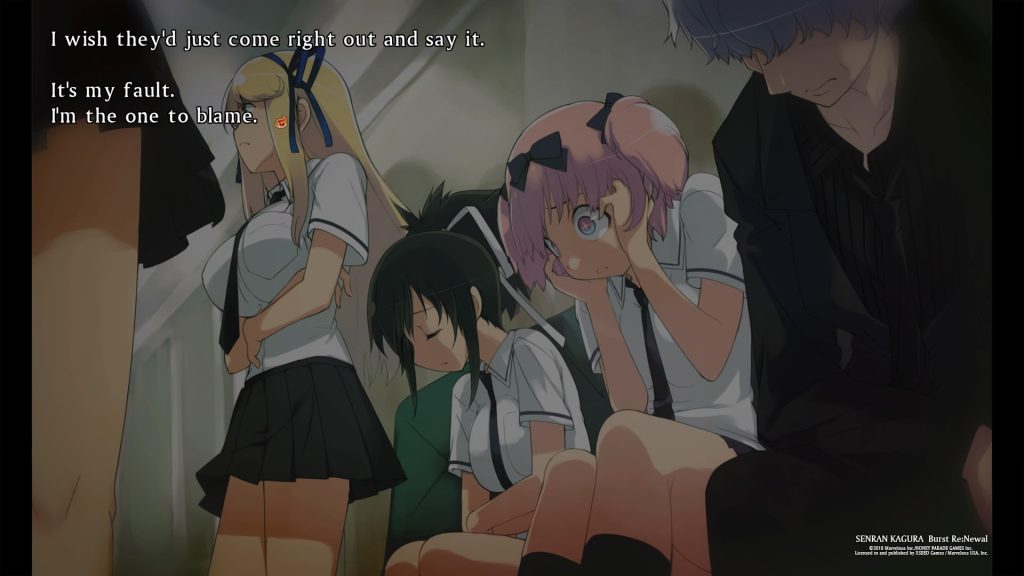 If there’s one thing that I should tell you about Senran Kagura Burst Re:Newal‘s story, it’s that it’s much darker than you would expect from a game like this. While starting out as little more than a story about girls wanting to be Shinobi, with the occasional cheeky joke thrown in for good measure, the story gets much more intense as it goes on. A surprising amount of philosophical pondering occurs within the story —  primarily focusing on what it truly means to be “good” or “evil” —  with the game making a lot of credible points about the many moral grey areas which permeate the way in which we, as human beings, categorize the world around us —  and that’s only in the main story. The alternate story deals not only with the Hanzō arc’s same philosophical dilemmas, with but issues of abandonment, poverty, and abuse. Those worrying about things getting too dark need not do so, as it doesn’t approach these topics in the same brazen way that it does with jiggle physics, but it’s still quite a shock to see how deftly each of these topics are handled — and how seamlessly they blend into the overall narrative of the game.

Of Shadows and Shuriken 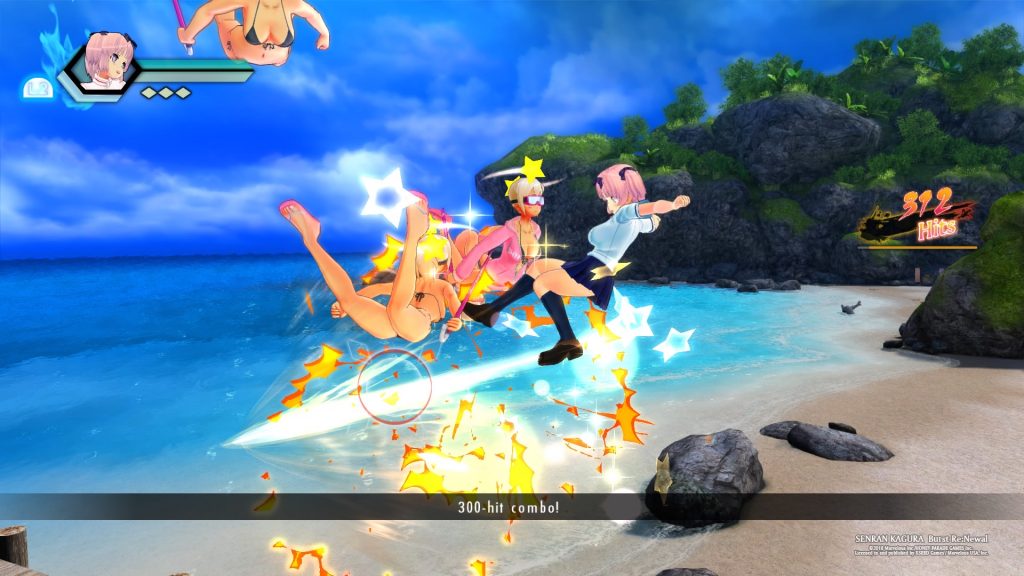 Who needs swords when you’ve got… um… shoes?

Despite the original Burst playing quite a bit differently from the rest of the series, Re:Newal‘s gameplay seems to have gotten with the times. Donning the same playstyle as its predecessors (well, most of them), Burst Re:Newal features the same kind of beat-’em-up gameplay that fans have come to expect by now, feeling especially similar to that within Estival Versus. Though still mainly being a button masher during mob fights, Burst Re:Newal does feature some additional polish — most notably tighter and more responsive controls, and the ability to guard cancel with ease — making combat feel a little cleaner without loosing that frantic feeling that the series has always been known for.

Where Burst Re:Newal really shines, however, is with its one-on-one battles. CPU-controlled Shinobi work slightly differently in this game than they have in the past. Behaving more like bosses than as evenly-matched adversaries, fighting a CPU-controlled opponents now requires a greater deal of skill than ever before. Rather than favoring huge combos, enemy Shinobi have, for the most part, become relegated to unleashing single strong hits, and short chains. During these attacks, the CPU is given super armor, so that the player can’t immediately combo their way out of things, but also now very clearly telegraph the attack before launching it. This means that, for the first time ever (at least for me, anyway), you’re going to have to get good with your defensive maneuvers. 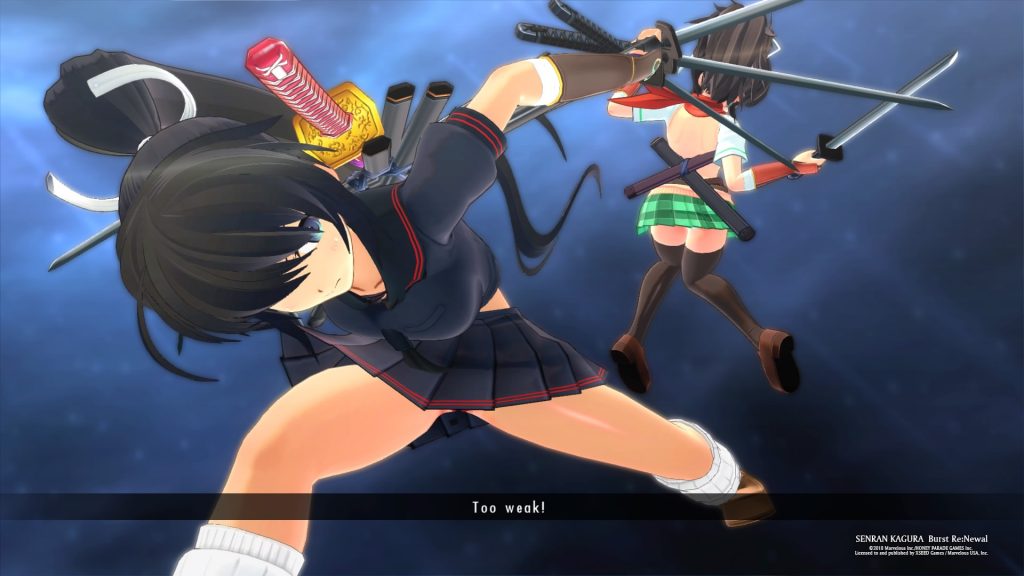 Because of the enemy’s ability to shrug off attacks, the only way to keep a high hit count going is by timing your parries mid-combo. I won’t pretend that it doesn’t take some getting used to, because it absolutely does, but these changes ultimately make Senran Kagura‘s combat feel like… well, actual combat. This, of course, is all topped off by the fact that Burst Re:Newal’s controls, specifically where defensive maneuvers are involved, have been improved significantly. And while there are still a few hiccups here and there (I don’t like that the game cancels my lock-on after I get hit with a strong attack, for example), the positives far outweigh the negatives in this situation. 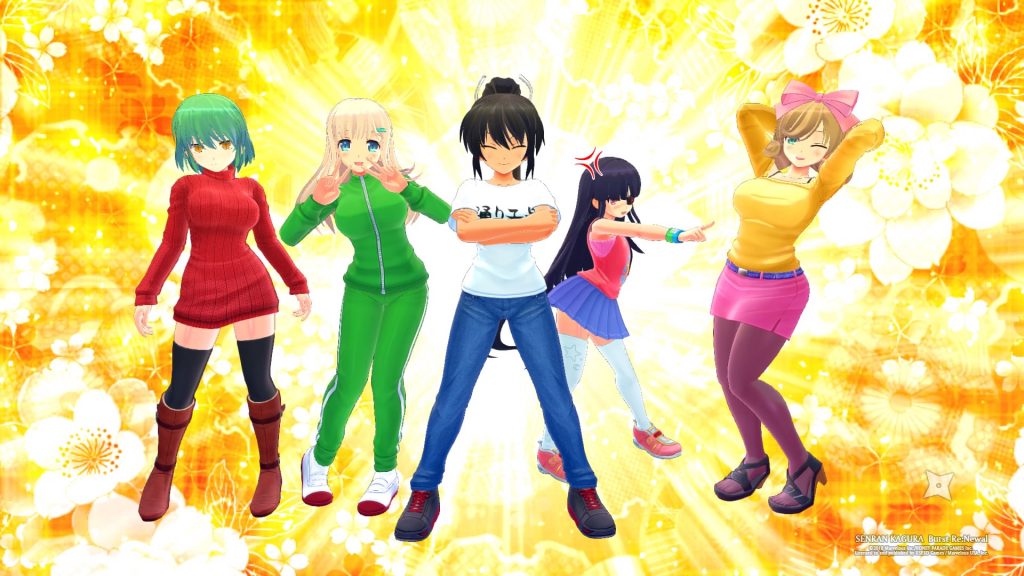 Look how happy everyone is!

Let me start this final segment by making something clear; yes, I know about the PlayStation 4 censorship debacle. And no, I don’t agree with the censorship of this game, or of any other game. I also am aware that this is not the fault of the developer nor of the publisher, however, and won’t be penalizing them for what happened. Phew, glad that’s out of the way! Anyway, with the exception of one small feature, Burst Re:Newal once again brings its fan service-ier side back in full force. Interested in making each Shinobi-in-training look extra unique? This game’s got you covered. Players can choose from a variety of outfits, hairstyles, accessories (complete with the ability to change size and location!), and even a handful of skin tones (basically applying a tan to the character) in order to change up their looks. Once you’re done picking out outfits, Burst Re:Newal also brings back the Diorama Mode, allowing for players to place any combination of characters they’d like (or up to five of them, anyway) into a number of different… erm… creative positions and situations. Previously mentioned feature aside, it’s got pretty much everything that you could ask for… you know, if you’re into that sort of thing.

Bursting at the Seams (with Fun)

The Senran Kagura series has come a long way since its initial release, and Senran Kagura Burst Re:Newal is undoubtedly the best in the series yet. Never once backing away from its focus on Life and Hometown while also ensuring an enthralling story and polished gameplay, Re:Newal is an excellent choice for both long-time Senran Kagura fans, as well as those looking to get into the series.

Full disclosure: This review is based on a copy of Senran Kagura Burst Re:Newal given to Hey Poor Player by the publisher.