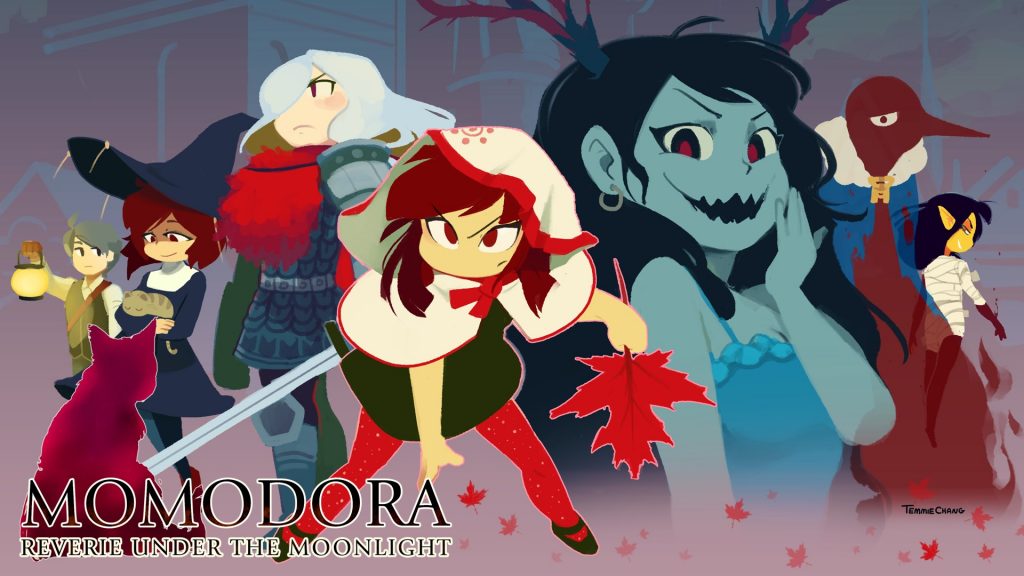 I remember the first time I played Momodora: Reverie Under the Moonlight. It was back in 2016 and I, just having finished a game (although I couldn’t tell you which one), was looking for something to play and happened to stumble upon both Momodora III and RUtM (Momodora 4). Intrigued, I went searching for the first two, found them for free on itch.io (they’re still there, by the way), and proceeded to happily play through the entire series throughout the next few days.

While the entire Momodora series is good, Reverie Under the Moonlight is leaps and bounds above its comparatively primitive predecessors. Featuring a much more ambitious adventure, gorgeous audio and visuals, and a fair bit of challenge, RUtM is a game that absolutely feels at home on the Switch, and I’m very glad that it managed to make its way onto the Switch. 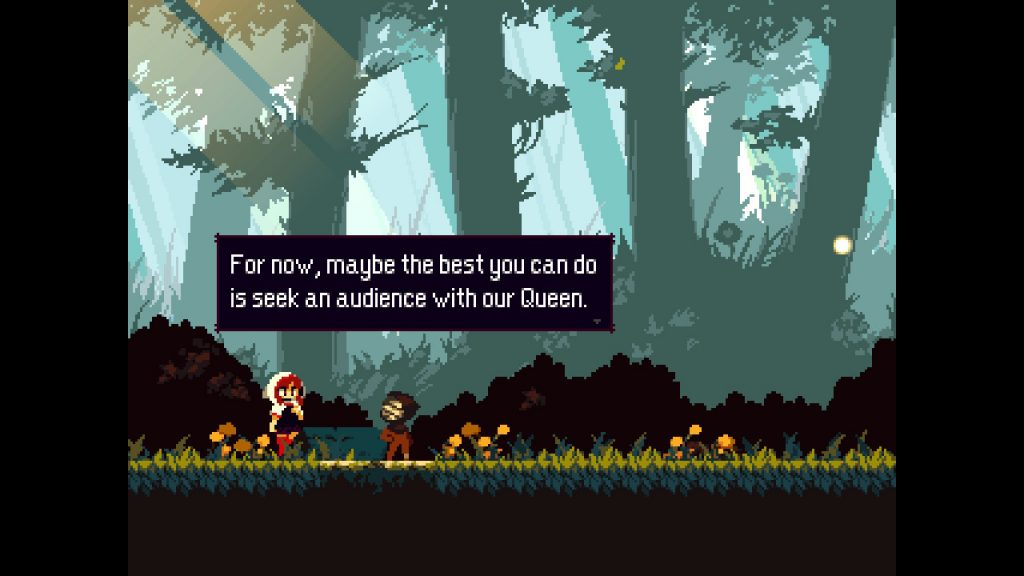 Taking place hundreds of years before the events of the first Momodora, Reverie Under the Moonlight follows the story of Kaho, a young priestess who travels to the Kingdom of Karst in order to stop a curse whose influence is so great that it has begun to affect her village far to the west. Kaho realizes, however, that her journey will not be an easy one. The curse’s influence over Karst has become immensely powerful, having already shaped the lands into a monster-infested hellscape, meaning that Kaho will need to be prepared to fight with every fiber of her being should she wish to find herself successful.

As much as I enjoyed the story that Reverie Under the Moonlight has to offer, I’ll be the first to admit that its presence is perhaps a little too weak for its own good. Despite knowing that you’re on what essentially amounts to a journey to the world from an evil curse, the story doesn’t overtly place much importance on where you’re going and what you’re doing. The game would, in my opinion, feel almost exactly the same if it were entirely stripped of dialogue. And, while Metroidvania games are never dialogue-heavy simply by nature, I do think that RUtM would have benefited from increased exposition. 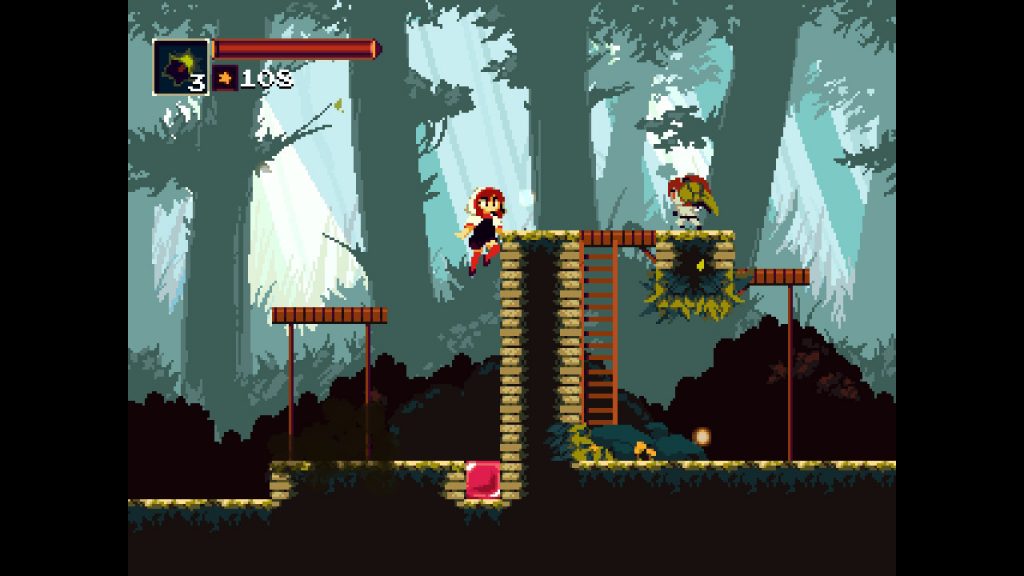 A fun and refreshing Metroidvania awaits! …If you can stay alive, that is.

The Momodora series has been flirting with Metroidvania mechanics ever since Momodora II, but Reverie Under the Moonlight is the first time the series has ever fully submerged itself into the genre; and they’ve done a bang-up job overall. Building upon the Momodora platforming mechanics that were already there, and adding a healthy dose of traditional genre mechanics, RUtM could best be described as a Metroidvania that is both bite-sized, while still being fully fleshed out in its own right. The overall goal is simple enough. With Karst Castle being locked behind a powerful magic barrier and the Karst Crest — the item which allows entrance to said castle — being split into four pieces and scattered across the surrounding areas, it’s up to players to guide Kaho through four different locations, collect the crest pieces, and make them whole again. First and foremost, anyway.

As far as Metroidvanias go, RUtM is fairly small — a feature which works both against and for it. On the negative side of things, the game’s small size does give it an unwarranted air of urgency when exploring areas. The entirety of RUtM‘s aesthetic is something which is both beautiful and subtly tragic, and the developer has done a wonderful job ensuring that this feeling permeates from every pixel of this game. However, because your time spent within each area is so fleeting, it just never feels like enough. I feel as though I don’t even have time to appreciate what’s being shown to me before I need to rush away to somewhere else. And, on the less artistic side of things, a smaller game means fewer explorable areas. RUtM‘s platforming mechanics are very solid, and it would have been great to show them off some more. 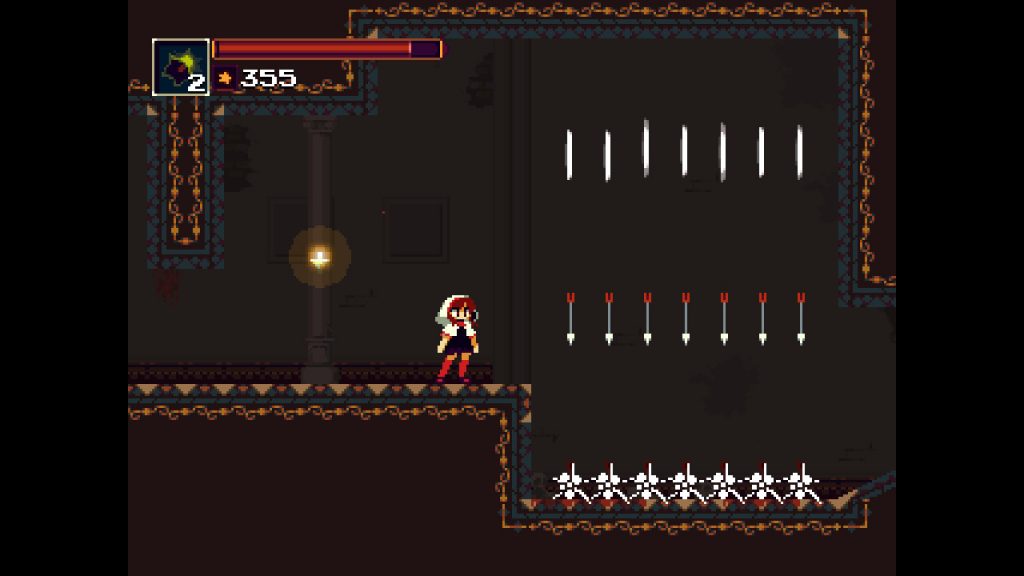 Always keep an eye out for things like trap switches and crumbling floors!

On the upside, Reverie Under the Moonlight‘s small size allows it to grant a greater degree of freedom. Much of RUtM is available to the player as soon as they get out of the beginning area. While collecting crest pieces does grant players additional abilities, they’re not given to the player that they may get past “skill check areas” which frequent most Metroidvanias (although there are a few keys laying around that you have to find!). And, while there is one ability that players obtain partway through the game that does act as a means through which to bypass a skill check, it’s primary use is for finding shortcuts and hidden items. While I don’t have an issue with how Metroidvanias normally handle progression, the notable degree of autonomy which RUtM gives to players as they explore is rather refreshing, and also helps to enhance its overall quality of life when it comes to replay value. 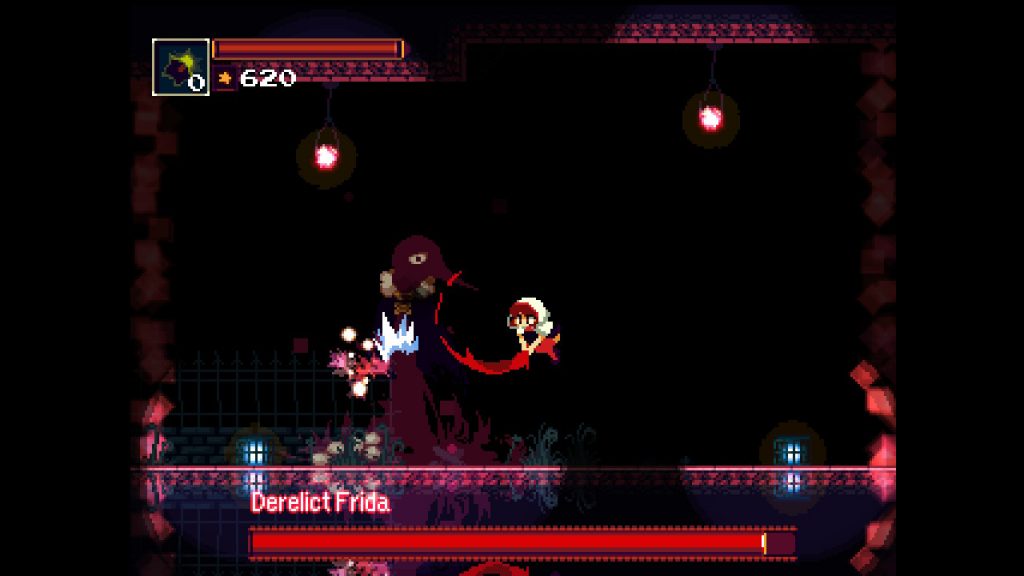 You’d better hope your combat skills are up to snuff if you want to make it past RUtM’s bosses!

While Reverie Under the Moonlight‘s somber-yet-relaxing aesthetic and whimsical platforming may put you at ease, the many foes you’ll be facing ensure that you’ll be dead in no time flat if you don’t take things seriously. Filled with things like giggling imps, floating kitsune, and an enormous (and possibly undead) witch whose weak point is her near constantly jiggling chest, you might think that RUtM is pandering to a certain audience… and, well, it probably is. But that doesn’t mean that you should take it any less seriously! Rather than relying on a flashy repertoire of moves, or the ability to level up and customize stats, RUtM‘s combat is simple and straightforward. The leaf (Kaho’s melee weapon of choice), bow, and ability to dodge roll and double jump are all presented to players from the get-go and, while the game does provide players a small amount of customization via crest piece abilities and equippable passives, they aren’t anything that will end up drastically altering how gameplay works.

Instead, it’s up to the player to learn how each boss works and fight accordingly. RUtM is nice enough to provide replenishable recovery items, and scatters a fair few health upgrades throughout its map, but you’ve got to keep in mind that Kaho isn’t exactly decked out in armor; if you get hit, it’s going to hurt. It’s never not hard to die, even with a fully upgraded HP bar, meaning that players need to be careful about how they fight. I won’t lie to you; the game is fairly unforgiving, and you’ll most likely have a difficult time in the beginning. However, after getting over that initial bout of difficulty, combat becomes very enjoyable. There’s a great deal of fun to be had while becoming a mean, lean, leaf-wielding machine, and the finesse you develop along the way really makes you feel like you’ve accomplished something by the time you reach the end of the game.

Well Worth the Journey

Momodora: Reverie Under the Moonlight has been out for a little over two years, now, but it still hasn’t lost any of its charm. Taking everything that made the first three Momodora games fun, and skillully launching itself up into a new realm of quality, the likes of which the series had never before seen, RUtM continues to stand out as an excellent example of what an indie Metroidvania should be. And I, for one, certainly wouldn’t say no to another Momodora game like this!

Full disclosure: This review is based on a copy of Momodora: Reverie Under the Moonlight given to Hey Poor Player by the publisher. 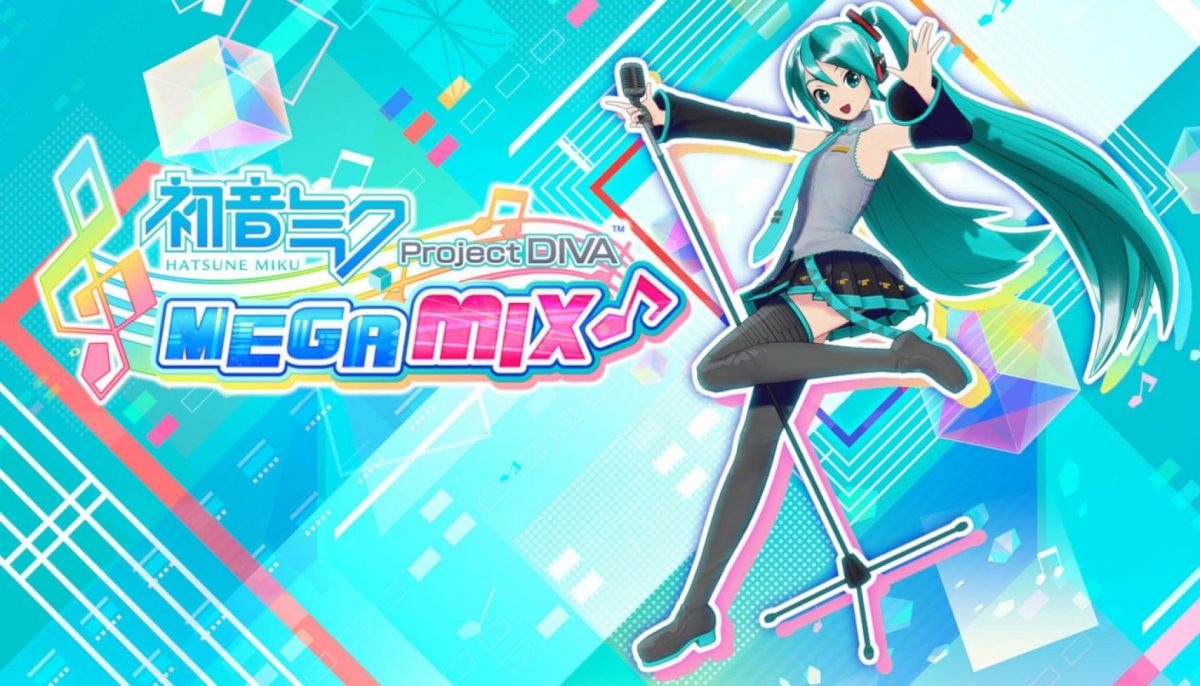