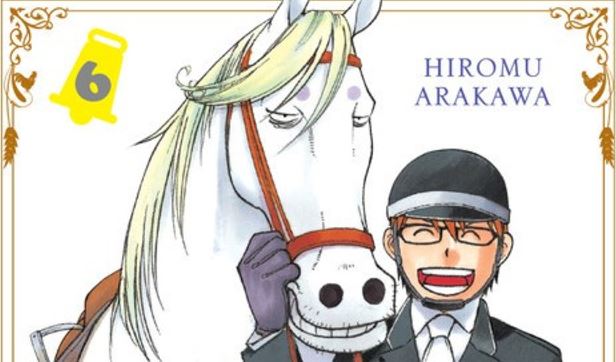 Before I review Silver Spoon Volume 6 proper, I must first apologize for not reviewing Volume 5. That absence was a last-minute cut, as arriving smack-dab within last fall’s VIZ review copy tsunami rendered Hiromu Arakawa’s slice-of-life series a lesser priority (recall it’s instead localized by Yen Press; in other words, being paid out of my own pocket, I’m under no obligation to cover it). Given it also wasn’t a particularly vital volume – really, it’s just EZO AG obtaining a dog mascot and Hachiken riding horses/prepping school festivals —  it was all more prime for the axe.

However, that latter excuse hardly applies to Volume 6, considering meet we new characters, the ever-productive Hachiken progresses his relationship with Mikage, and, oh yeah, he’s hospitalized right before EZO AG Fest. Obligated to review this series I may not be, my heart as a manga enthusiast says otherwise, for Silver Spoon‘s masterpiece quality simply must be shared with the world. So without further ado, let’s address the following quote from the Volume 7 preview:

“He worked harder than anyone. But even so, sometimes hard work doesn’t pay off. There are times you have to accept that life isn’t fair.”

This, more than anything, is not only Silver Spoon Volume 6’s leitmotif, but the entire series hitherto – Hachiken has struggled with gaining his parents’ approval, adjusting to EZO AG’s physical labor and agricultural world, and, yes, even accepting that his vagabond brother can’t just be wished away. Only recently has he found a niche in working hard and perhaps even creating a safe haven away from his parents’ nebulous expectations; in other words, he’s “finding himself,” but what exactly that entails remains a mystery. Him suddenly abandoning the suburbs and living up the farming life would be far too obvious, and for all his work ethic and growth, there’s still the lingering suspicion he’s merely coasting along than considering the bigger picture — his future.

Of course, Hachiken’s hardly different from any other high schooler in that regard — let’s not forget the diminutive principal even encouraged his aimless disposition in the very first volume — but this volume’s horse-riding competition may hold a clue. Really, outside his crush on horse-loving Mikage, there’s nothing in it for Hachiken: his accompanying steed (Chestnut) hates him, he wakes up at ungodly hours, and the physical toils in everything from walking long distances to sanitary care drive him crazy. But he tries so hard because it’s a distraction — even when his stirrup mishap has him clinging to dear life, the finish line’s his only concern. When he just barely succeeds, we cheer with him too; when he expresses frustration at only gaining fourth place, we know something’s awakening. 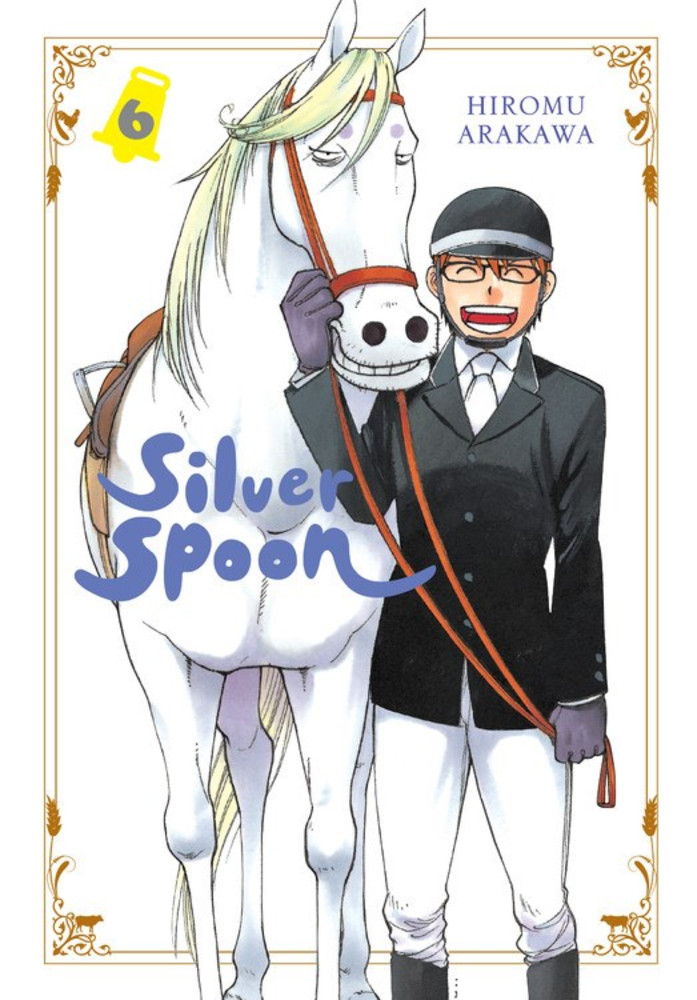 To claim Hachiken’s a selfish individual — at least, at this point, anyway — would also be wrong; if anything, that a) others admire and even express concern over his inability to say “no” and b) his insane work ethic coincides with helping others proves he ultimately has noble intentions. But noble intentions don’t always gel with common sense, and his obsessing over every last detail for managing the school festival on top of Equestrian Club duties and maintaining his grades grow beyond haphazard distractions and fester into a self-destructive lifestyle benefiting everyone but himself.

Said self-destruction manifests the aforementioned quote into reality: on the morning of the school festival, right after he mustered his nerves in asking Mikage out, he collapses.

Unfolding in the last chapter, while the full magnitude of his hospitalization remains unknown, our impending dread all but confirms he’ll certainly miss the fair he worked so hard for. A cruel lesson, perhaps, in overexertion and heeding one’s on limits, but the very final page — Hachiken opening the door to the absolute last person he wants to see — is a chilling shock. What already began as a lamentable high school memory will certainly ensue into kicking him while he’s down, especially if his previous insecurities and familial tension are anything to go by. It won’t be fair, it won’t be pretty, and no one will leave that hospital a better person for it.

But even then, when considering that same preview, there’s still light at the end of the tunnel in another quote — “Still, someone is almost certainly watching the effort you’ve put in.” We all certainly know who that is, and if said preview is anything to go by, Hachiken may be making headway towards his only definite dream. Like they always say: life’s full of up and downs — it’s not always fair, particularly when certain folks set unreasonable expectations that ceaselessly knock you down, but there’s always someone rooting for you.

For a coming-of-age story as Silver Spoon, such a message makes it all the more real. Any gaffes such as Ayame Minamikujo leaning a little too much into the “Bratty HO! HO! HO! English Girl” aside, my faith in Arakawa’s superb storytelling ensure my new hero can weather this storm.

Full Disclosure: This review was based on a retail copy.