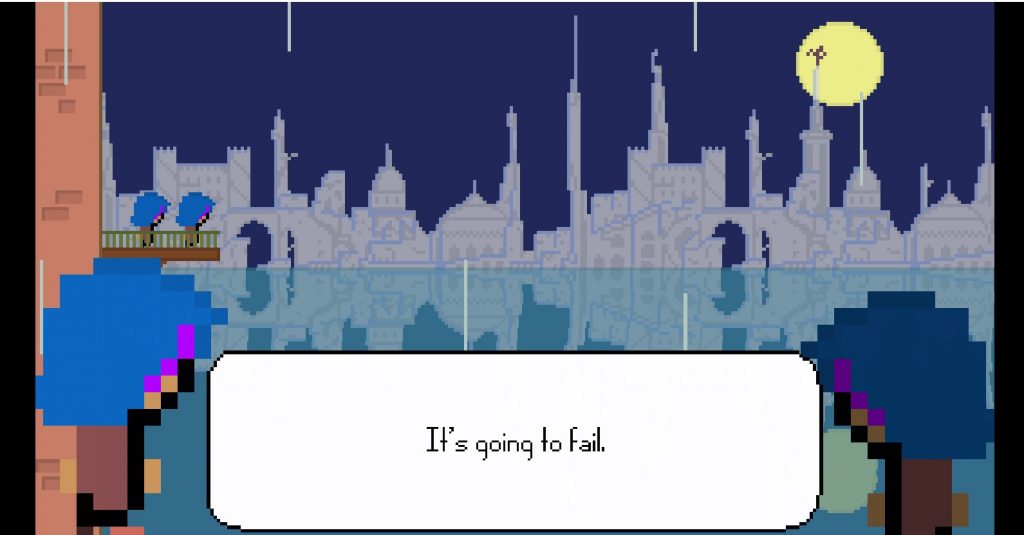 The Rainsdowne Players is a sweet 8-Bit style game, following two actors, trying to make their theatre troupe the best it can be.

It certainly doesn’t help that they are willing to take a lot of flack from the audience, including letting them throw various objects on stage, including bottles, paper planes, tomatoes and even rocks. But you just dodge them happily and carry on with the show as if nothing happened.

In order to improve your performances, you must talk to the audience members and folks around town to gather new “inspiration” for your plays. These are story points or objects you inject in when writing the plays, such as romance, a monarch and a bear. You can then use the subjects given to you to create a special play, specifically for that audience member, in the hopes that it’ll make them super happy. They can then tell all their friends and help expand your audience. If they like the play, you’ll get more money. If they don’t… They throw more stuff at you.

The World’s Most Violent Audience 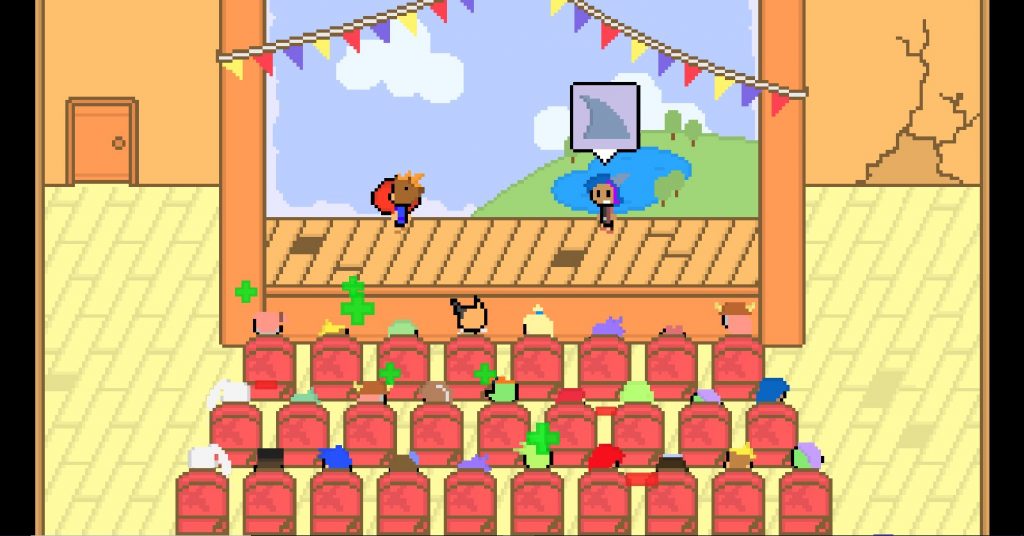 As touched upon, this is probably the pickiest audience in the history of theatre! Even if your play is going really well, they’ll still throw stuff at you! Sure, if they’re having a good time, they’ll throw less stuff, but they’ll still throw things. If the play goes really badly, they’ll pelt you mercilessly with rocks and other heavy items – which seems too harsh a punishment!

One would think their creative process would be better if they invested in some security guards. But then again, every theatre needs their hook!

When on stage at the theatre, you have to dodge the items being thrown at you by using the arrow keys to move right or left. I did find the tutorial for this a little patronising – I’m well aware that my timing is the problem thank you very much, there was no need to rub it in! It’s not hard really, but I didn’t notice any real benefits to dodging the violence on stage. If your ability to miss the projectiles is connected to how well your play did, I didn’t notice. Still, it’s great that the creators want to give the player something to do whilst the plays are in progress and that they are trying to engage the player in all the theatre troupe does. 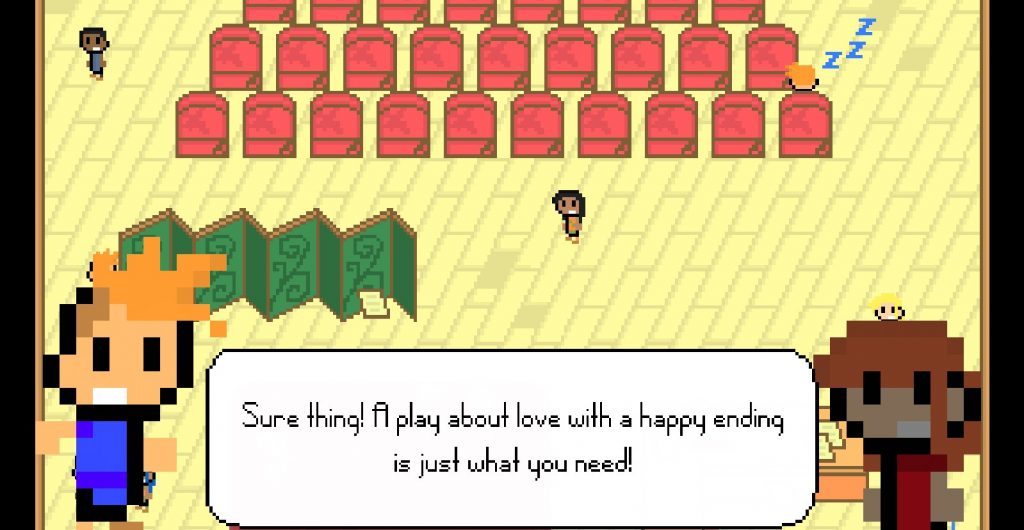 After the play, you chat to the audience to get new ideas, which you then add to your next play. Your cat then notes down which ideas each audience member likes and, for a fee, will reveal how to please them. While this is a fun way to customize the plays, it did make me question the artistic integrity of the acting duo. Surely it isn’t art if you’re just pandering to whoever is nagging you?

What’s also annoying is that the cat’s book doesn’t specify how they want their ideas incorporated into the play. Each play is divided into four parts: Subject, Location, Purpose, Encounter and Outcome. So, when an audience member specifies what “inspiration” they want the play to have, making their play just becomes trial and error. After I discovered an audience member wanted a play about a bear and a race, I tried so many different combinations, trying all sort of other “inspirations” as fillers, yet still couldn’t make the little twerp happy!

I really liked talking to the crowds and going through their stories in order to gain new “inspirations,” but trying, again and again, to give them their “Bear Race” story but being repeatedly shot down was just frustrating.

A Whole World of Rainsdowne 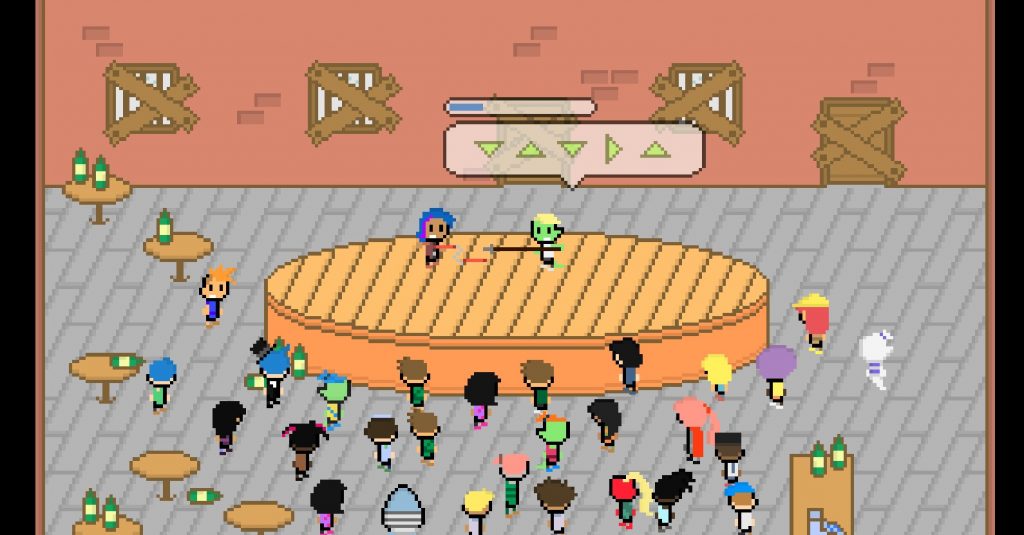 Once you explore the town, you can discover other places for The Rainsdowne Players to perform at, such as an open mic night and some kind of stage fighting arena. As someone who has worked in theatres and in theatre troupes, I really like that the game explores different types of performance.

What’s also great is that each performance space offers a different mini-game. In the fighting arena, you have to play some sort of cute Guitar Hero parody, where you hit the arrow keys to fight your opponent. In the open mic night, you have to tap along with the beat, in a way reminiscent of many early noughties music games. This gave the game a little more variety. I’ll admit that if I had to spend the whole game dodging water bottles in the theatre, then I would have been quite bored.

Different theatre venues respond differently to which performance is in front of them. You design plays the same way- by selecting “inspiration” in the book. But different venues prefer different plays. For example, I created a super awesome play about a lake-shark losing a fight to a bear. The theatre crowds booed it off stage, but the fighting arena crowd appreciated it for the work of genius it was!

All of Rainsdowne’s a Stage 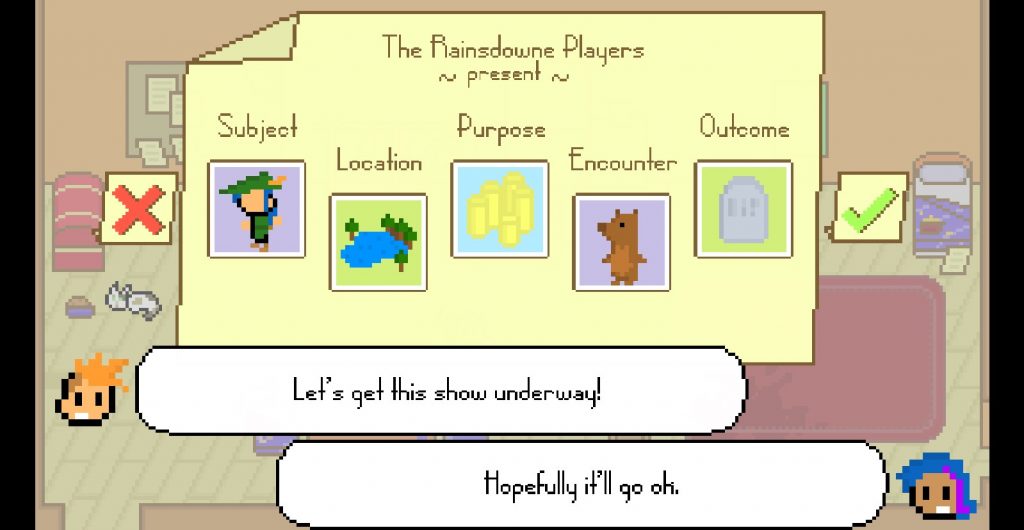 The Rainsdowne Players is a little rough around the edges, but overall, it’s a fun experience. It would be better if having to dodge projectiles became more interesting, such as having to jump or deflect, rather than just move left or right. Creating the plays could also be a little more organised. Perhaps each piece of “inspiration” could be filtered into different categories for Subject, Location, Purpose, Encounter and Outcome. Then if an audience member gave two preferences, you could put them in their places, but there would still be the challenge of finding the best combination of other “inspiration” to make it work.

Having said that, a real effort has been made to make this entire world interesting. There is a wide range of diverse characters and some small mini-games in the town, such as a fishing game. The music is really fitting and sweet, giving kind of a Hobbit-like vibe. Plus, it’s really great that both main characters (that you get to name) are portrayed as gender-neutral. Overall, it’s a really sweet experience and a fun, cute game.

Full Disclosure: This review is based on a PC review copy of The Rainsdowne Players given to HeyPoorPlayer by the publisher.