Grabbed By The Ghoulies…And Ghosts!

One of my favorite childhood memories is of spending what seemed like an entire summer vacation with my best friend as we tried to power our way through Ghosts ‘n Goblins on the NES. Sure, it was a soul-crushing experience. And it may have resulted in more than a few blistered thumbs and broken controllers. But trust me, it was worth it. No, Capcom’s grueling, ghoul-filled action-platformer didn’t pull any punches. But that didn’t stop us. Guiding the noble knight Arthur to Satan’s throne room to win back his main squeeze was a serious rite of passage for countless gamers born and bred in the 80s. That said, we were happy to soldier on in our quest for playground bragging rights.

Battle Princess Madelyn, the latest release from Casual Bit Games and indie games publisher Hound Picked Games, keeps the spirit of Ghosts ‘n Goblins alive. Set against the backdrop of a dark and dreary fantasy land, the game puts players in control of the titular heroine Madelyn as she explores eerie graveyards, ghost ships, trap-filled swamps, and countless other areas seemingly transplanted from the very game that inspired it, battling all manner of ghouls & ghosts along the way. And while it’s got a few chinks in its shiny 16-bit armor, the end result is an adventure that any retro gamer worth their heart-spangled skivvies should enjoy so long as they don’t mind a challenge.

A Girl And Her Dog 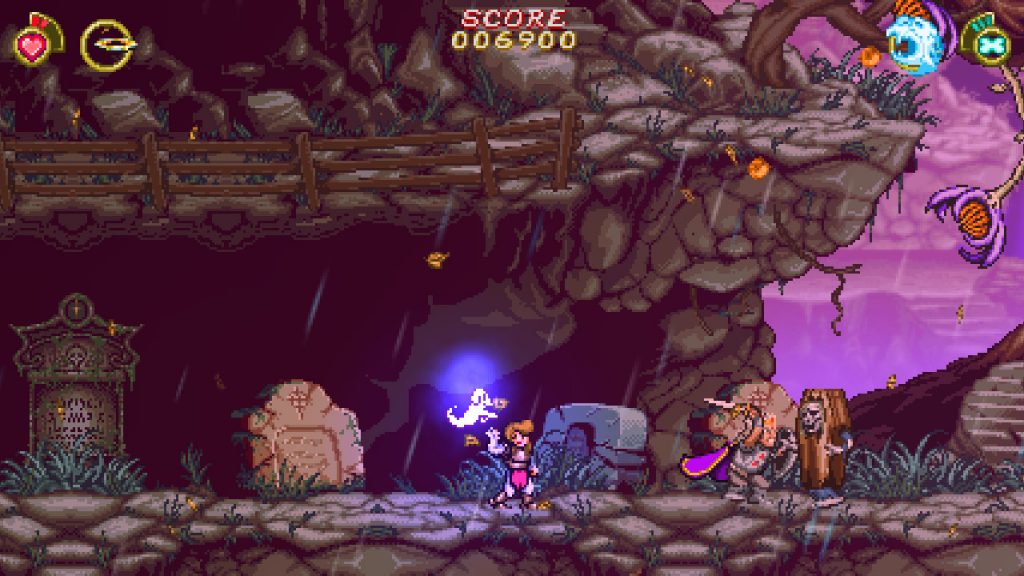 Talk about a grave situation!

Keeping with the 1980s theme, Battle Princess Madelyn‘s story begins with Maddi’s grandfather telling her a story while she lays in bed in a scene clearly inspired by The Princess Bride. After that, we’re treated to a Saturday morning cartoon-quality animation showcasing an evil wizard who captures Madelyn’s family and kills her dog before disappearing to his lair. Now, it’s up to the Battle Princess —now joined by her phantom canine Fritzy— to fight her way across a dangerous land to rescue her family from the wizard’s clutches.

No, it isn’t the most dramatic story out there, but it doesn’t need to be. What Battle Princess Madelyn lacks in terms of narrative scope it makes up for with pure, unadulterated charm. And if you have a soft spot for the platformers of old, you’ll enjoy exploring every inch of this pixelated nightmare land.

The story mode is the star of the show in Battle Princess Madelyn. It mixes the run-and-gun action of Ghosts ‘n Goblins and Metroidvania style exploration to create a pretty ambitious adventure. There’s a wide variety of landscapes to explore. And each one is just teeming with side quests to complete, secrets and hidden paths to uncover, and towering bosses to vanquish. This means you’ll have plenty to keep you busy if you want to see everything the game has to offer.

Then again, if you’re looking for a more streamlined experience, Battle Princess Madelyn‘s Arcade Mode might be a better fit for you. This game mode ditches the Metroidvania formula in favor of a straightforward sidescroller experience. This is essentially an arranged mode featuring finely-tuned versions of each of the areas you’ll explore in the story mode, albeit with tons more enemies on screen. That said, if you happened to enjoy Cursed Castilla, you really owe it to yourself to check this mode out. 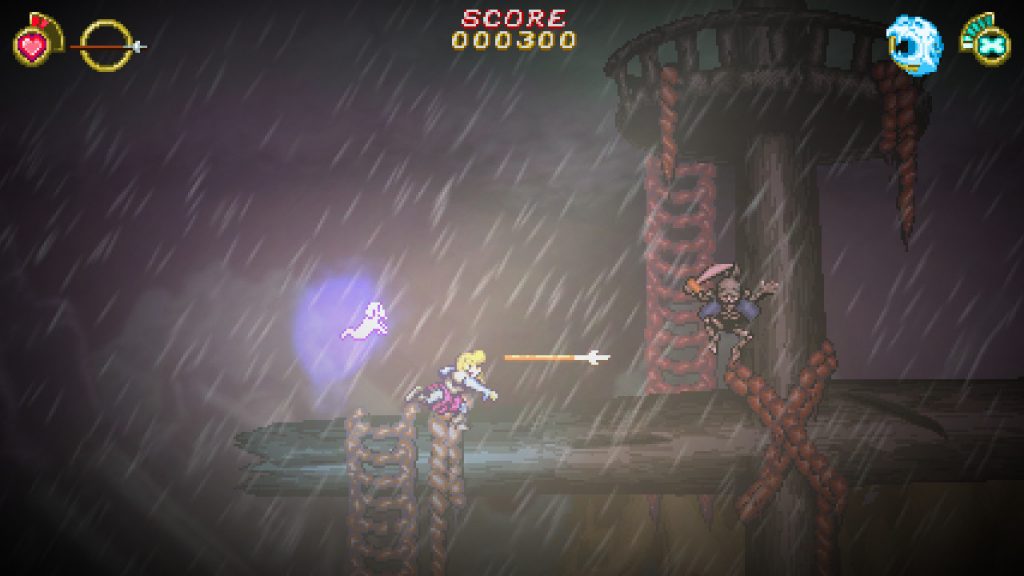 If you’ve played Ghosts ‘n Goblins before, you’ll feel right at home when it comes to controlling Madelyn. Her default weapon is a lance. This handy murder-stick can be thrown in four directions and reduce most baddies into ghastly pincushions. However, over the course of your journey, you’ll uncover other weapons. These include things like daggers, throwing discs, and even abilities for Fritzy himself, which all have their own unique properties.

Whether you’re leaping over spike-filled pits or plunging the business end of your spear into a massive skeleton king, Battle Princess Madelyn‘s controls are snappy and satisfying. And with tons of enemies and pitfalls filling the screen at any given moment, this is definitely a good thing.

As you’d expect from a game inspired by Ghosts ‘n Goblins, Battle Princess Madelyn is tough. Really tough. Getting hit once will shatter your armor, leaving you with little but your precious pajamas to protect you from the things that go bump in the night. Get hit one more time and you’re toast. Thankfully, as you rack up kills and collect loot you’ll steadily charge Fritzy’s energy meter, which he can use to resurrect you. Though this energy is also what gives Fritzy his powers. That means you’ll have to choose wisely when it comes to making use of his awesome powers or keeping your supply of lives up. 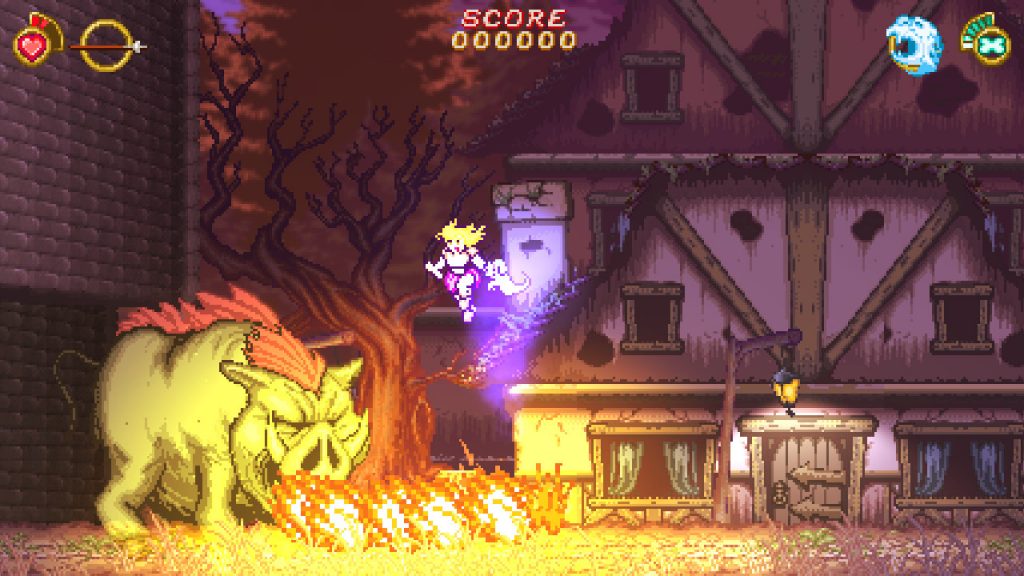 The bosses sure look nice, but their patterns are easy to exploit.

Make no mistake, Battle Princess Madelyn is a fun retro-inspired romp. With its charming sprite-based visuals and challenging gameplay, it does a great job of recreating the thrills of a bygone era. That’s not to say it’s perfect, however.  A number of nagging issues rear their head like a freshly-spawned zombie to keep the game from becoming a true classic.  For starters, most stages feature a ton of verticality and perilous platforming. However, you have no way of panning the camera up or down, which leads to tons of leaps of faiths, where hordes of monsters, spikes, or a bottomless pit could be waiting. This is incredibly frustrating and led to countless trial-and-error deaths during my time with the game.

Battle Princess Madelyn also suffers from some questionable level design at times. One dungeon had me puttering around stumped for several hours trying to find a way to open a hidden passage. The most glaring issue I experienced, however, was that certain items I picked up wouldn’t display properly in my inventory. I once picked up what was supposed to be a boss key. However, it never registered as such, leaving me unable to tackle one of the game’s big baddies.

Speaking of big baddies, the bosses in Battle Princess Madelyn certainly look great. Sadly, they’re more bark than bite. Each enemy only features a handful of attacks, and their easily telegraphed patterns make them surprisingly easy to topple. Given just how challenging the rest of the game can be, it’s a shame these major showdowns don’t pack more of a punch.

These issues aren’t surprising. After all, we’re talking about a game made by a team of four passionate indie devs. Still, a little more polish could have made Battle Princess Madelyn an absolute gem. Here’s hoping Casual Bit Games delivers some patches to iron out the kinks and make the game the best it can be post-launch.

Despite a few missteps, Battle Princess Madelyn is a real treat. Developer Casual Bit Games has done a wonderful job of crafting a 16-bit style adventure that not only looks but feels the part of the games that inspired it – even if it doesn’t quite match them in terms of quality. And with two compelling game modes to conquer, it’s a challenging quest that will keep masochistic platformer fans busy for quite some time.