The Bug Hunt is Back and Bigger Than Ever!

Around 3 years ago, I reviewed Earth Defense Force 4.1 on PS4. The niche third-person shooter series from Sandlot and D3 Publisher has always had a great cult following for its B-movie setting, dialogue, and fun class-based shooting mechanics. Sandlot and D3 have a number of titles under their EDF belt ever since 2003, and Earth Defense Force 5 carries on the tradition of campy shooting goodness the series is known for while bringing in a number of small tweaks and improvements to make this new entry more polished than its predecessors.

When the Orkin Man just won’t cut it 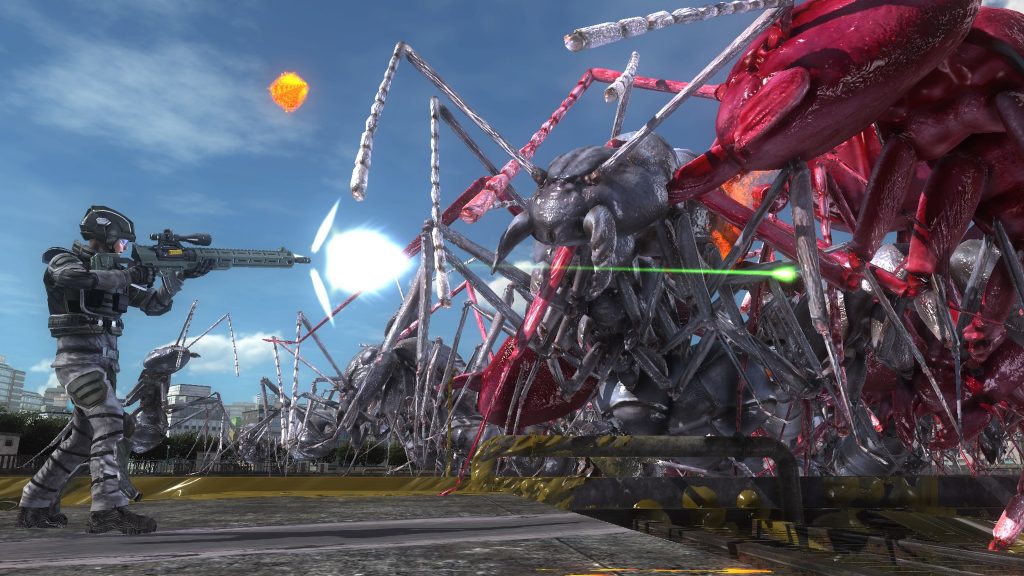 Earth Defense Force 5 starts with you assuming the role of a new security guard at the top-secret underground facility Base 228. While still technically a civilian and on your first training day at the job, an invasion of giant insects breaks in and starts wreaking havoc throughout the underground base. With your trainer killed in action, you have to join up with a squad and through trial-by-fire fight your way out of the base and see what’s happening above ground. Finally making your way up above, hordes of giant ants swarm the base, giant pillars rain down from above and massive UFO’s fill the sky. This isn’t an outbreak of freakish mutants, this is a full-scale alien invasion. 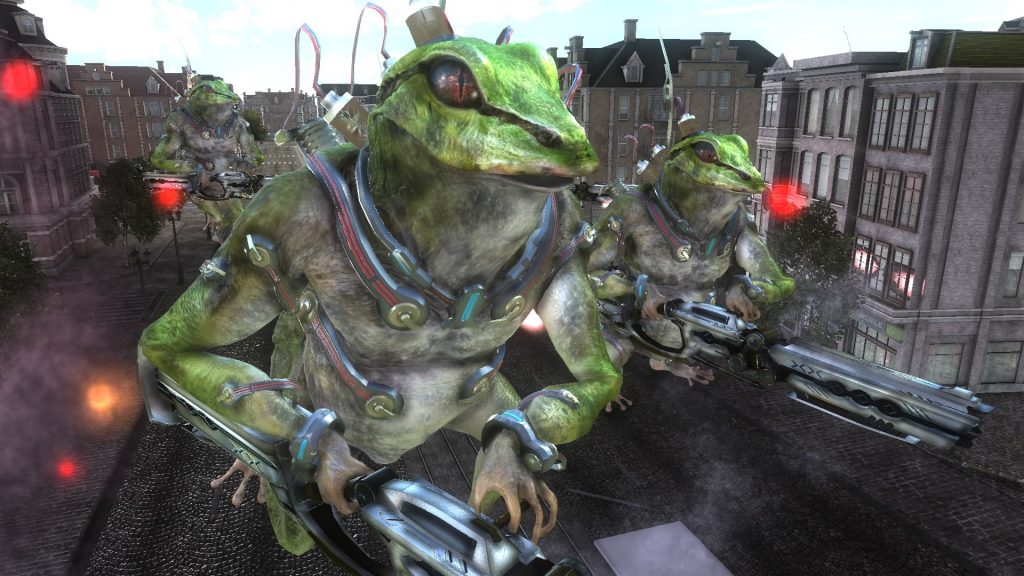 “Go on, ask if Gamestop has Battletoads again.”

Being a fresh inductee into the Earth Defense Force somewhat against your will (despite your accompanying sergeant’s constant reassurance that he’ll get you to safety at some point or another), you’ll need to join in the fight against the massive alien invasion. To help in your warfighting efforts, there are 4 classes to choose from. Rangers are all around balanced units and are an easy entry point for newcomers to the EDF franchise. Wing Divers are flying units that have extremely high mobility and rely on energy weapons but are limited in armor and attack range. Air Raiders are support units that can call in air strikes or request vehicle drops, and Fencers are slow but heavily armored units that can dual wield large weapons and shields. These are all reoccurring classes in the Earth Defense Force games, and returning players will find themselves right at home. I will note that Fencers are incredibly difficult to play as and require a lot of practice to get the most use out of them. 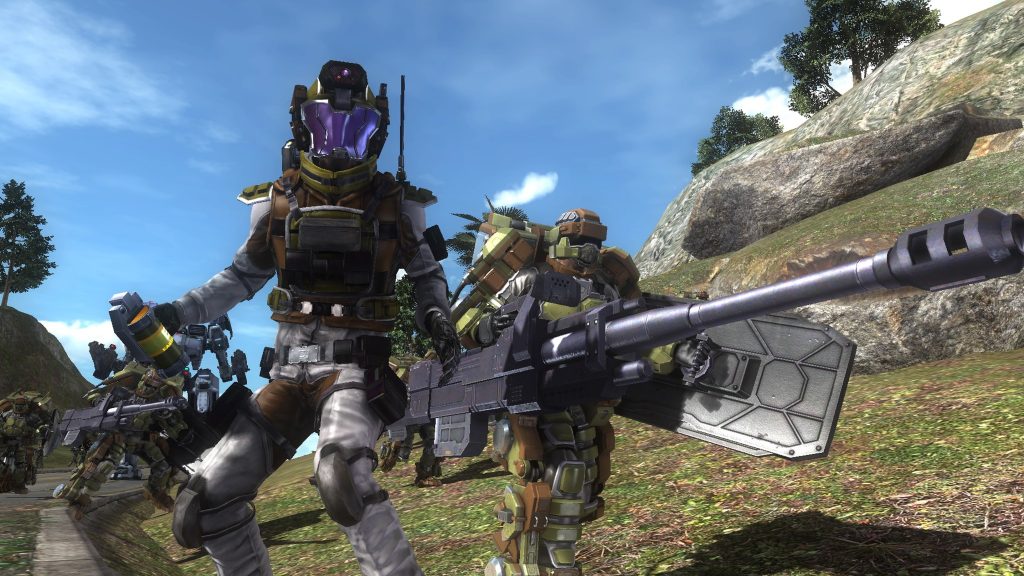 Earth Defense Force 5 has four distinct classes to choose from, expect to spend a lot of time mastering the Fencer class.

The first thing I noticed when starting out my time with Earth Defense Force 5 was a noticeable visual upgrade. While not exactly maxing out the capabilities of the PS4, there’s a number of improvements readily visible when compared to Earth Defense Force 4.1. The geometry on the 3D models has been improved, a number of shaders and visual effects such as spotlights in dark areas and mild CG shadows spruce up the visual appeal along with a mostly consistent 60 FPS on my PS4 Pro. Also impressive in Earth Defense Force 5 is its sense of scale. Running around the invaded towns, countrysides, and factories feels big enough playing the ground-based classes, and feels even larger when playing as a Wing Diver. Pepper in the enormous UFO’s floating in the sky (I’m talking Independence Day-sized examples) and the sheer number of giant critters wreaking havoc and you can feel pretty insignificant in comparison. There’s even a Pacific Rim style Kaiju battle where you get inside a giant mech suit to fight a Godzilla-sized monster off. If there’s one thing Earth Defense Force 5 has going for it, it’s a lot of variety.

Atlantic Outer Edge of a Surface 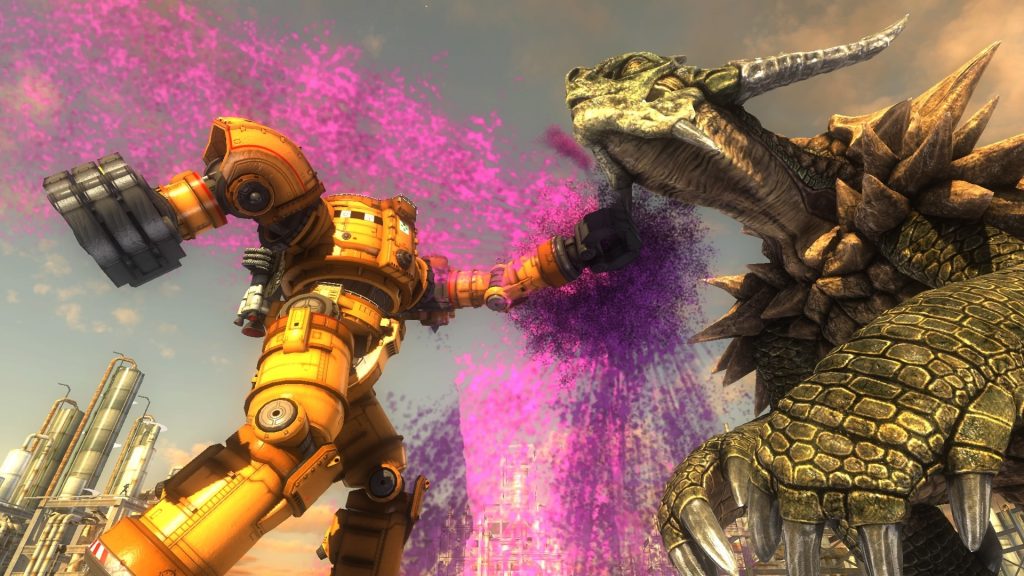 Are there things better than fighting a giant monster in a giant robot?  Not many, that’s for sure.

Speaking of scale, the amount of content Earth Defense Force 5 has plenty to go around. There are over 100 missions to play through in story mode and over 1000 weapons across the different classes to master. Killing monsters yields item drops, and with the ludicrous number of creatures you’re going to be killing, you’re always going to be either finding or improving your arsenal of weapons and armor. Earth Defense Force 5 also offers both online AND offline co-op play. Players can make a team of four for online play, while couch co-op is limited to two player split screen play. I played a round of missions with Casey Scheld over at Gamers Heroes (who also reviewed this game), and it made the experience even better. We had no issues with the network or any sort of lag, and taking on the hordes of monsters became a little more manageable working together. It is worth noting that the difficulty didn’t seem to adjust for more players, so if you want a challenge with more people you’ll want to pick a higher difficulty level to match. Also, it was a little confusing getting a match going as it doesn’t seem there is an internal feature to invite players, you have to do so outside the game via the PS4 menu. 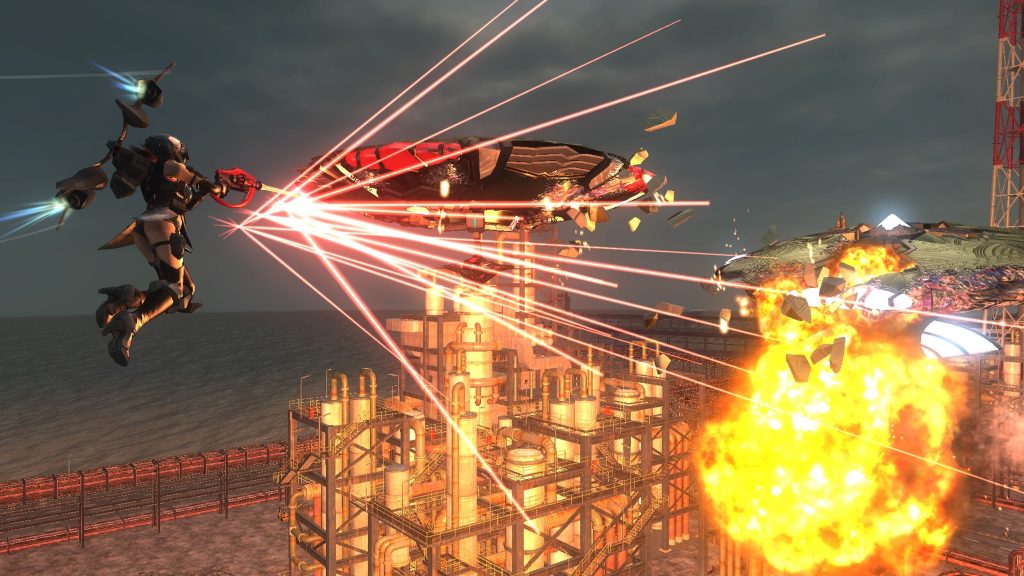 Wing Divers can cover a lot of ground quickly and show off the game’s sense of scale well. Watch out for the lack of armor though!

Perhaps the Earth Defense Force series’ most endearing feature is its campy B-Movie setting and dialogue. Like a Japanese monster movie that’s been TOO literally translated, Earth Defense Force 5 has ridiculous dialogue and voice acting that will keep you laughing every time you hear it. From cheesy line delivery, being asked how you like your eggs in the middle of a firefight, and talking about how the death gratuity for the EDF sucks, your squad mates and radio transmissions alike provide plenty of laughs for both you and your friends. I constantly felt like I was listening to audio samples from a loosely translated PS1 game. It may sound awful to some people, but embracing the cheesiness just made my time with EDF5 all the more enjoyable.

Energy Beam to the Junk.  Ouch. 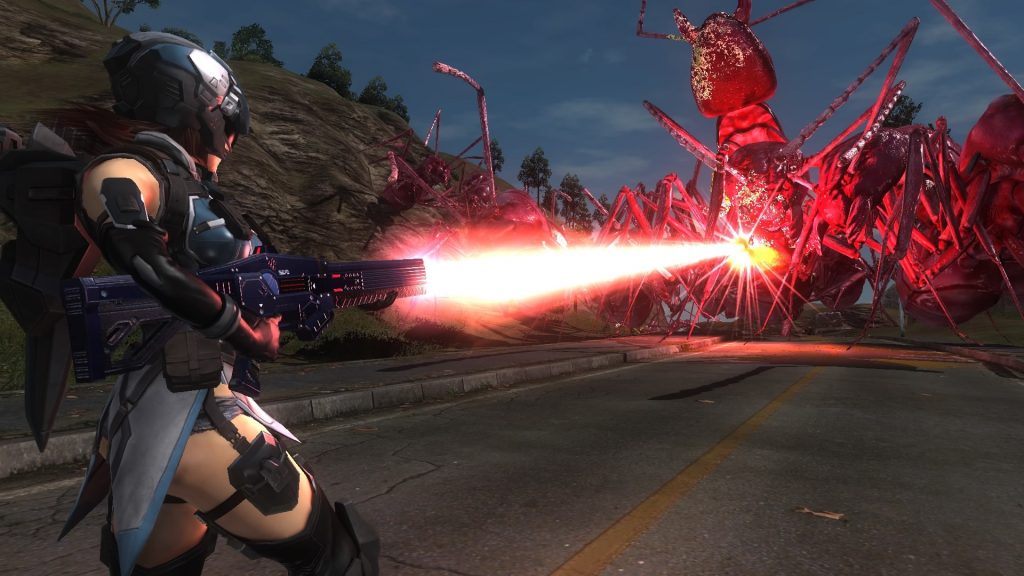 Wait, do ants even have junk?

I don’t think Earth Defense Force 5 will win any awards or break any barriers, but it’s perfectly fine for games to just be stupid fun at times, and EDF5 fills the slot nicely. I never felt bored fighting the endless hordes of monsters, and had even more fun with a friend. If you want to get into the Earth Defense Force series, this is the entry I would recommend as this is one of the most polished titles from Sandlot and D3 Publisher yet. If you’re looking for some honest, clean (also messy) fun, Earth Defense Force 5 has you covered. Don’t forget to be generous and invite a friend along to go bug hunting!

Full disclosure: This review is based on a review copy of Earth Defense Force 5 given to Hey Poor Player by the Publisher.

I’m with the skater boy, I said see you later boy! Absolute Entertainment were one of several companies made up of ex-Activision staff (others being Acclaim and Accolade) that…