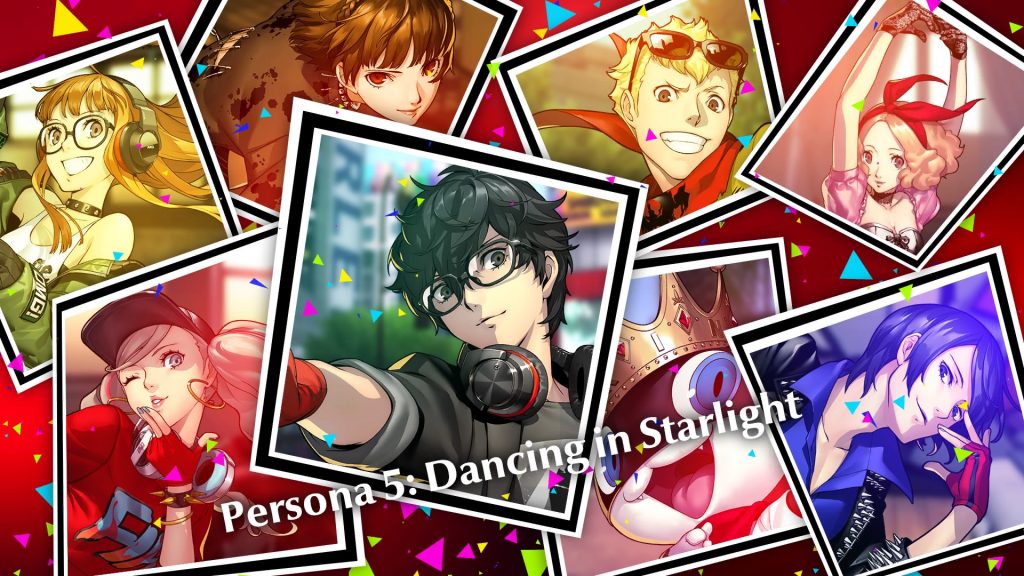 Persona 5: Dancing in Starlight is something that I’ll admit that I never saw coming (hah, get it?). At least, not this quickly. I mean, the game hadn’t even been out in the West for an entire year before ATLUS started talking about it getting a spin-off; talk about fast! Fortunately, unlike with certain other titles, “fast” doesn’t equate to “rushed” in this case; because I’ll tell you right now that, much like the ensemble that is the Phantom Thieves themselves, Dancing in Starlight, while not perfect, is something which has been put together rather impressively.

The Ties that Bind 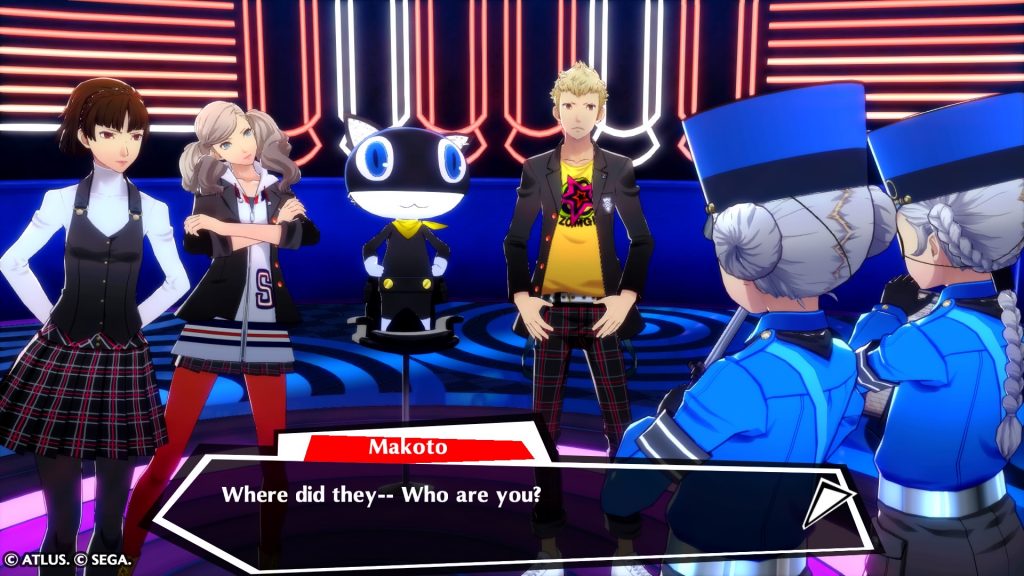 Remember how Persona 4: Dancing All Night had an extravagant and surprisingly long story, which both added new elements to the Persona 4 canon and strengthened elements that were already there? Well, unfortunately, you’re not going to have anything that impressive this time around (which actually shouldn’t come as a surprise to anyone who’s been paying attention to P5D’s development). But, hey, the game does still have a story! Sort of. Occurring sometime after the events of Persona 5 itself, P5D’s story begins with the newly christened Ren (the protagonist) and rest of his Phantom Thieves compatriots (minus one pancake-loving detective, of course) waking up in what appears to be a disco-themed version of the Velvet Room. Before they can even begin to figure out why they’re there, however, they find themselves interrupted by none other than Justine and Caroline (apparently Lavenza can split herself up, now) who inform them that they’re there – why else – to dance! And why exactly are they dancing? Well, would you believe me if I told you it’s because they’re trying to prove that their guest is better than the guest of their eccentric older sister? Because that’s seriously why they’re all there.

This could just be me here, but, in all honesty, I feel like this whole dance competition fits in pretty well with the cast of Dancing in Starlight. Having spent the entirety of Persona 5 as a group of friends who march to the beat of their own drum, something as quirky as being teleported to an interdimensional disco palace in order to dance for the amusement of a pair of 10-year-old tsundere and tsundere-er wardens doesn’t seem all too far-fetched for them. In fact, as the game quickly makes clear to the player, it ends up being something right up their alley. 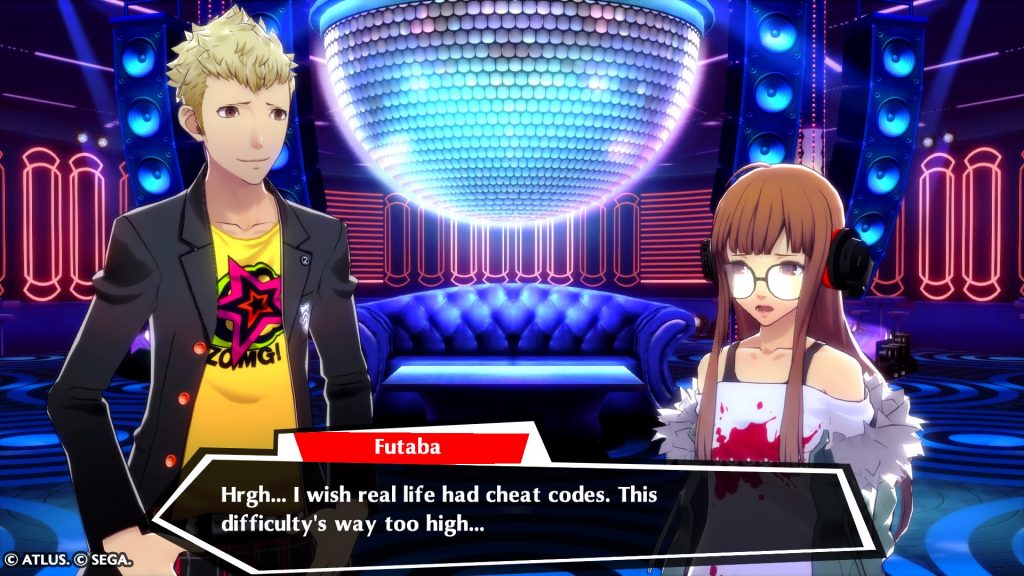 Despite not having much of what could conventionally be called a “story”, Dancing in Starlight still manages to, at the very least, have story-like elements in the form of its Social Events. Acting similarly to Persona 5’s on Confidant system, Social Events allow the player, as Ren, to talk with each of their teammates. Because this is a dancing game, however, you can expect Social Events to work a little differently than what you’re used to. Contrary to how they behave in the main series games, unlocking new Social Events simply requires that the player fulfill certain tasks as they play – such as Makoto’s events requiring that players complete levels by wearing different accessories, or Yusuke’s requiring that players rack up Perfect note hits. Because you’ll most likely end up doing most of this naturally unlocking Social Events is a bit of a cakewalk, but the concept itself is still neat.

So, what exactly are Social Events? Well, as I said, they’re basically this game’s version of Confidants. Each Social Event stars you and a fellow member of the Phantom Thieves (or possibly several!) chatting it up and getting to know each other better. While it probably won’t do much for you if you’re looking for actual story content, those of you who were into what Confidant conversations had to offer (guilty as charged) will probably end up liking them plenty. The quality of writing featured within P5D is absolutely on par with that of P5, and each of the Phantom Thieves’ personalities made the transition into this game perfectly intact. 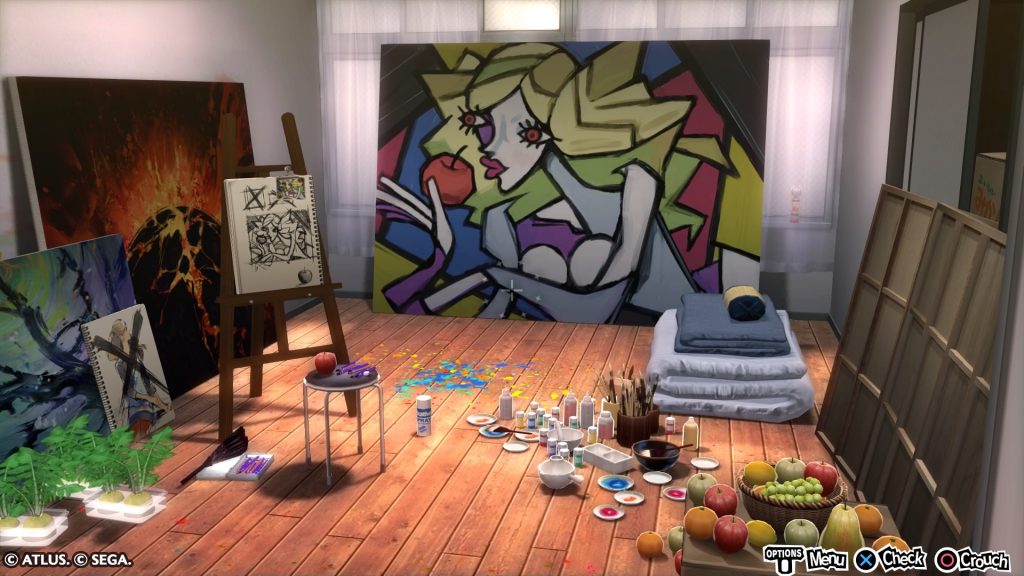 Social Events also allow you to get an up-close-and-personal view of your fellow thieves’ rooms. After climbing high enough on that Social Event ranking ladder, subsequent events will begin to take place in each of your allies’ rooms (Morgana’s are in your rooms, but whatever), and even goes so far to allow players to explore the rooms in the first person afterward. Aside from just being plain cool, these bedchamber excursions also allow players to engage in a scavenger hunt by collecting hidden cards and exchanging them for new outfits and accessories – a win-win all around!

P5D’s writing is great overall, however, there was one thing that I took issue with. And, while this borders on being entirely subjective (like reviews aren’t subjective anyway, am I right?), it’s still worth mentioning. Dancing in Starlight, for some reason, chooses to narrate Ren’s thoughts in the first person. What I find curious about this is the fact that neither Persona 5 nor P5D’s counterpart, Persona 3: Dancing in Moonlight, do this. It’s a small change, but it has a noticeable effect; it takes the player out of control. Ren has now become his own person, at least partially taking the player out of the role of the protagonist. P5D even goes so far as to subtly begin shipping Ren with one of the girls (much to my disdain), further removing the player’s sense of self while controlling Ren. I know that this isn’t the first Persona game to do this – the Persona 4 spin-offs turn Yu Narukami into his own person as well – but P5D seems to be especially sneaky about it, and that doesn’t quite sit right with me. 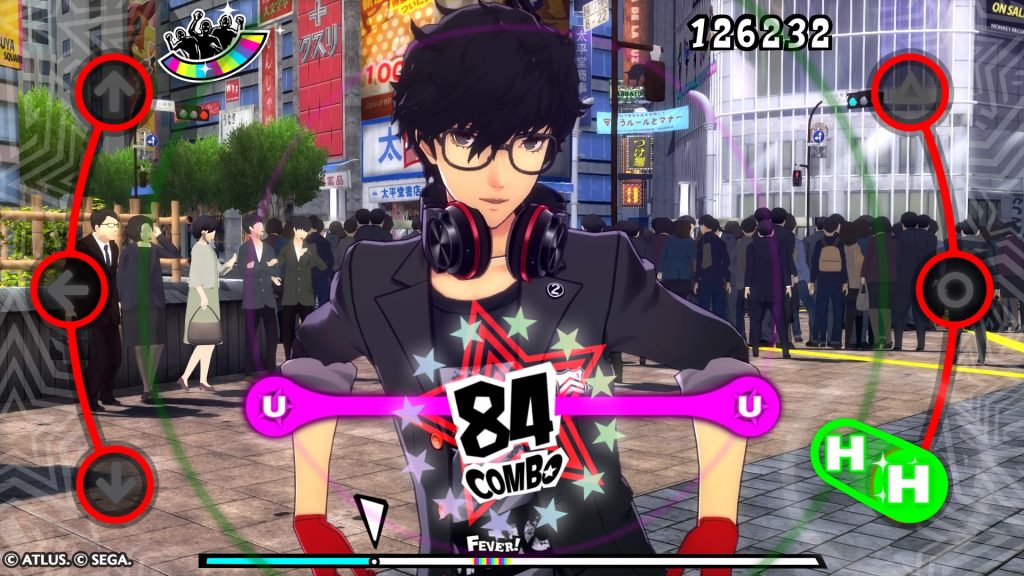 A good sense of rhythm and quick fingers are all you need. Easy, right?

As far as actual gameplay is concerned, Dancing in Starlight operates fairly similarly to its predecessor, Persona 4 Dancing All Night. And by “fairly similarly”, I mean it’s literally exactly the same (which is great for all of you P4D veterans out there!). This game probably won’t appear to be too difficult at first glance, denoting that players do little more than hitting the proper buttons as they appear while also making sure to stay in time with the beat of the song. However, as any rhythm game fanatic can tell you, looks are incredibly deceiving when it comes to games like this. Despite how it may appear, properly coordinating button presses with a consistent rhythmic accuracy is much easier said than done, and, with a game like P5D, you’re going to need a lot of practice before you’ll be able to dance with the best of ‘em.

Fortunately, P5D is sure to cater to all types of players. Not only does the game range from the newbie-friendly Easy Mode to the soul-crushingly difficult All Night Mode, but it also allows for a bevy of customization options. Players who still find themselves having a tough time on the easier modes, or maybe want some help easing into the harder ones, can turn on such functions as auto-scratching or having “Goods” not break combos, at the cost of lowering their score at the end of the level. On the other hand, players who want things even more difficult than they are, or people looking to boost their score, can activate a number of challenges ranging anywhere from losing immunity during Fever Time, to making the notes invisible (hard pass on that last one). All-in-all, P5D does an excellent job of catering to all skill levels. 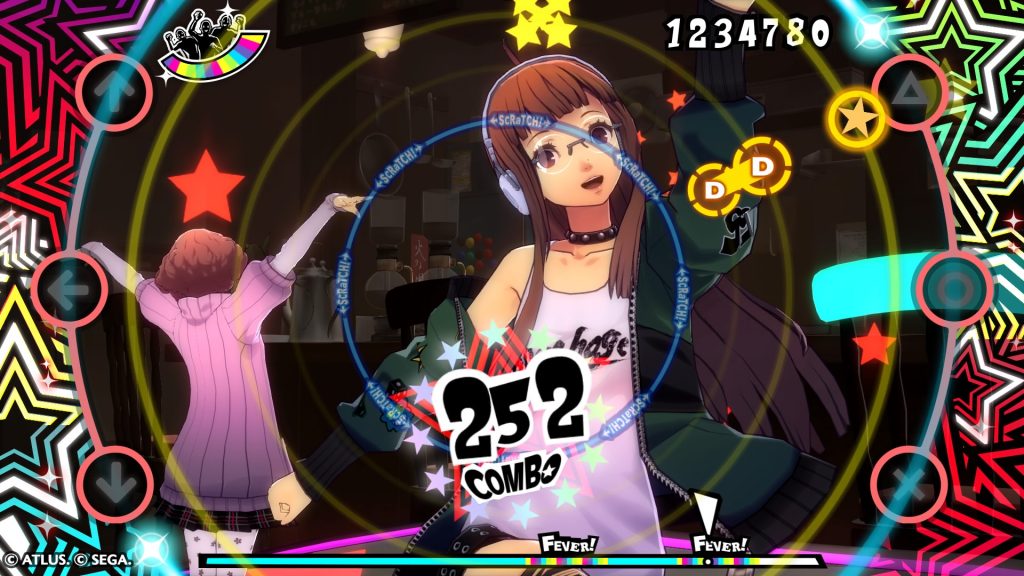 They only call it a Fever because your moves are so SICK.

Keeping what I just said in mind, I have noticed, however, that P5D seemed to ramp up the difficulty a little more than its Persona 3-based counterpart – at least in the beginning. Unlike P3D, P5D seems to have no issue throwing tricky rhythms at its players right away – even on Normal mode – and, while I’ll admit that it definitely helped prepare me for the harder difficulties (on both games) in the long run, its harsher start did end up throwing me for a loop at first.

Tuning in, Tuning Out 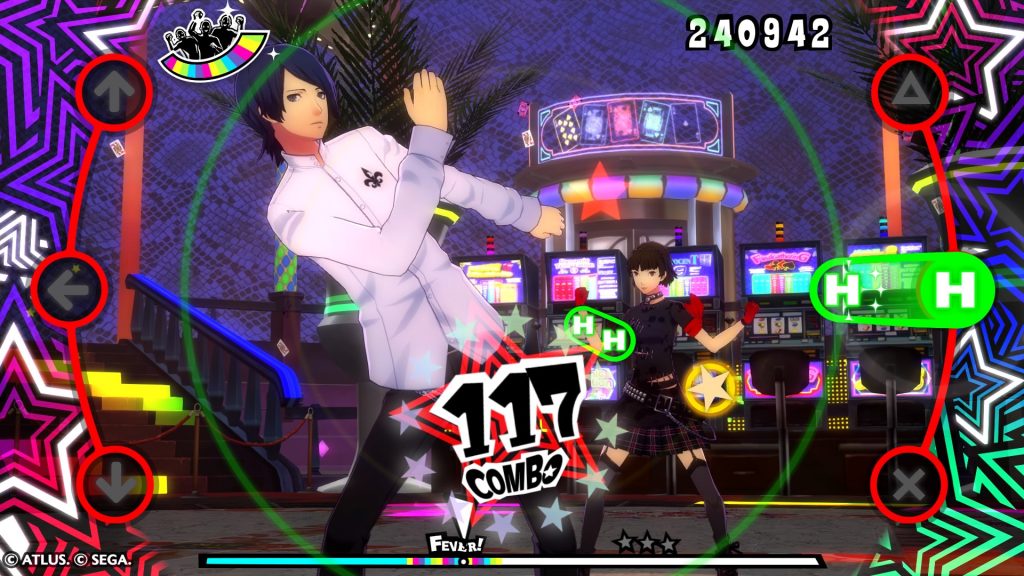 The Whims of Fate (Yukihiro Fukutomi Remix) is a personal favorite of mine.

Finally, before wrapping things up, let me take a moment to talk about the game’s music. Rather than attempting to hop genres or shake things up too much, P5D seems to stick to what it knows best for the most part. Offering a medley of smooth remixes that showcase the blues and jazz-themed overtones that the soundtrack has become known for, as seen in such songs as Whims of Fate and Beneath the Mask,  and adding in a dash of excitement with both standard and remixed version of battle themes like Last Surprise and Rivers in the Desert, P5D’s track listing is pretty solid overall and doesn’t make sure to miss any major Persona 5 tunes (aside from Sunset Bridge, maybe)

I can’t help but wonder why it didn’t decide to be a little more daring, though. When it comes to remixes, P3D goes noticeably more out of its comfort zone to deliver a more diverse arrangement. Admittedly, not all of these ended up being good, but most of them did. I’m not sure why P5D didn’t attempt to fall in line with that as well. Still, what they do have is good. So, in that regard, maybe it’s for the best that they decided not to mess with things.

Phantoms of the Dance Floor

Persona 5 Dancing in Starlight has almost everything that you could want in a musically based spin-off of a JRPG. Enjoyable conversations, fun gameplay, and a rockin’ (well, it’s more jazz than rock) soundtrack all add up to one heck of a time that, after reading this, you probably will see coming. And, now that you have, you’d be doing yourself a favor to get in on the action.

Full disclosure: This review is based on a copy of Persona 5 Dancing in Starlight given to Hey Poor Player by the publisher.