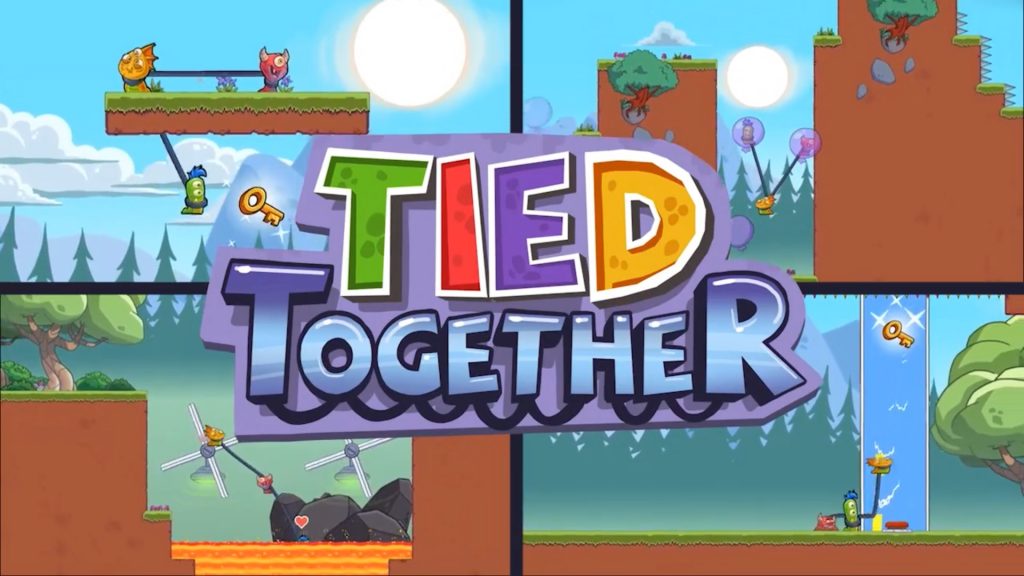 Making a game exclusively multiplayer is a risky move. If you want it to do well, you really have to know what you’re doing. You need to make sure that each of your game’s elements line up, and that having multiple players mess about won’t ruin anything. It’s a tricky business to be sure, and, when it comes to actually creating a multiplayer title, I couldn’t tell you much – after all, it’s not my field of expertise. But what I can do, however, is tell you whether or not a game is good after playing it. And, unfortunately, Tied Together isn’t very good.

Tied Together is a perfect example of something not making the transition from paper to practice. Truth be told, I actually like what this game is trying to do. It’s rather unique for a multiplayer game, and I know that there’s potential for it to be fun. But, as it stands, it isn’t. A game isn’t just a single idea; it’s a collection of moving parts, working together to create something great. But it’s clear from the very get-go that Tied Together didn’t give nearly enough time to each of those individual parts. And, without any kind of polish, a game like this is never going to shine.

All for One, and One for All 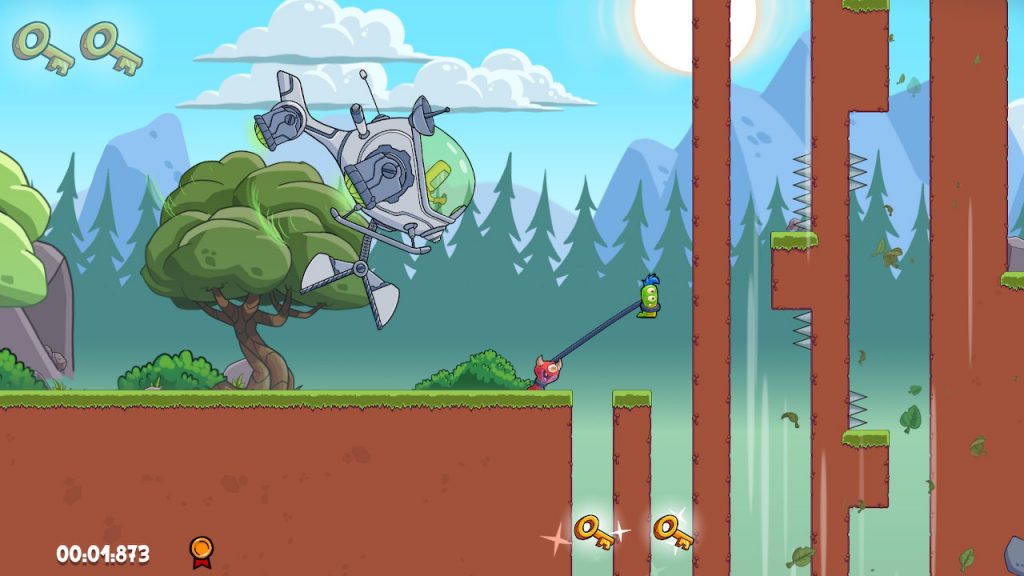 Platforming becomes a lot harder when your ability to move gets as restricted as it does in this game.

Tied Together is a simple game, with a simple premise; to rush though each level, collect the keys scattered about, and make it to the end as quickly as possible. There is, of course, a catch, and, given the name of the game, you can probably figure out what it is. That’s right, folks, you’re literally tied together with other players – and here’s to hoping you like that mechanic, because it’s basically the only thing that this game’s got going for it.

Tied Together is incredibly short, spanning 65 levels total – generally ranging anywhere from around 20 – 40 seconds each – so, you’d think that the developers would do their best to get creative in order to give the players the most bang for their buck during their short stay with the game. But there’s no such luck, here. Most of the game revolves around the most basic of platforming mechanics, requiring little more of the players than that they time a few jumps together, or take separate, but nearby routes in order to collect the keys needed to unlock the end-level gate. Other than that, there really isn’t much to these platforming segments – a real shame considering what they could have potentially been. 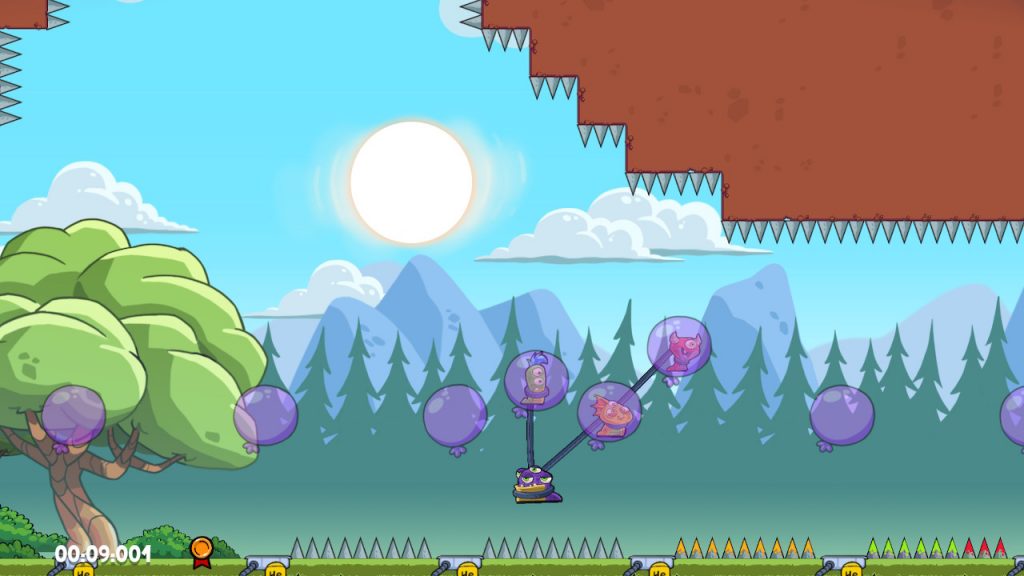 Careful; those spikes are sharp!

There are, to be fair, a few times where the games attempt to be creative with some physics-based shenanigans. Several levels involve the players’ ability to “burrow” halfway into whatever surface they’re touching, affixing themselves to the floor or walls, and having other players use that point to gain momentum for tricky jumps and maneuvers. Similarly, there are also a handful of levels that involve players carefully making their way up a chasm or over spikes or lava to a safe place by floating around in balloons. Unfortunately, once again, it’s just not enough. What’s implemented isn’t bad itself, but it simply feels too introductory. With the exception of one or two levels, it’s far too easy to blaze through everything without giving much thought to what you’re actually doing. And, given how lacking this game is in the content department, that’s not good. 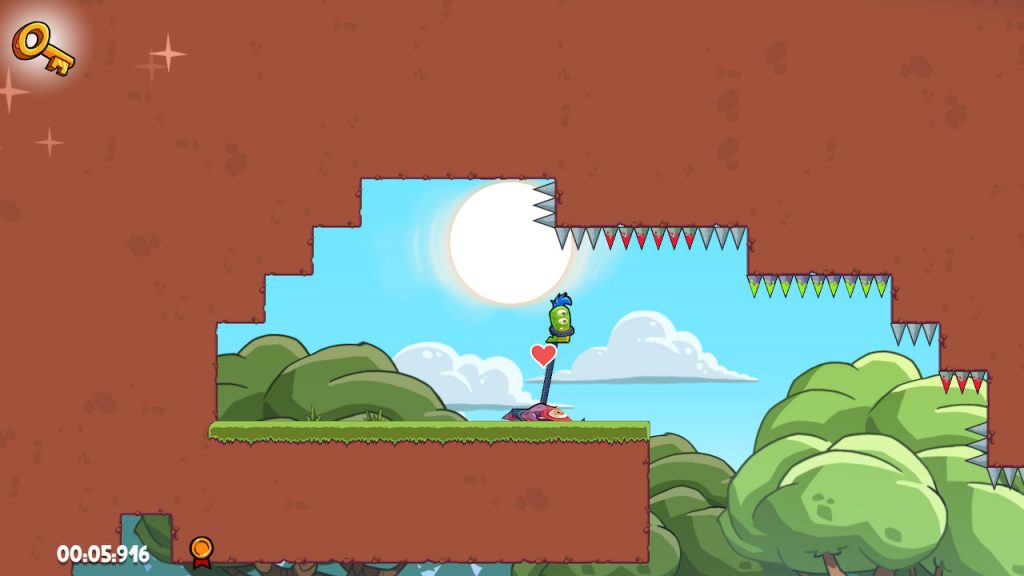 Hey, who are you calling dead weight?

Tied Together (as I’ve already mentioned) is comprised of 65 levels in total – 40 of which are 2-player, and 25 of which are for 3 – 4 players – and, while splitting levels up to focus on specific player number is great, there are problems with both modes. When it comes to the 2-player levels, there really isn’t much to say that I haven’t already said. Simply put, things are too simple. If this level set is specifically designed for two players, then, at least in my opinion, this was the time to pull out all of the stops; to make things as tricky as possible (within reason, of course). If players only have to worry about themselves and one other person, then Tied Together really should have been focusing on finesse, here. Instead, what it presents players with feels like an elongated tutorial.

To give credit where it’s due, the game’s 3-4 player mode is probably where it shines the most. Despite once again simply throwing the same handful of tricks at the player over and over again, adding in a few extra players did make things a little more enjoyable – and even a little humorous, at times. However, there’s (once again) just no sticking power. The 25 levels went by all too quickly and, with no desire to go back due to the ho-hum level design, my friends and I found ourselves entirely done with the game in roughly 30 minutes. 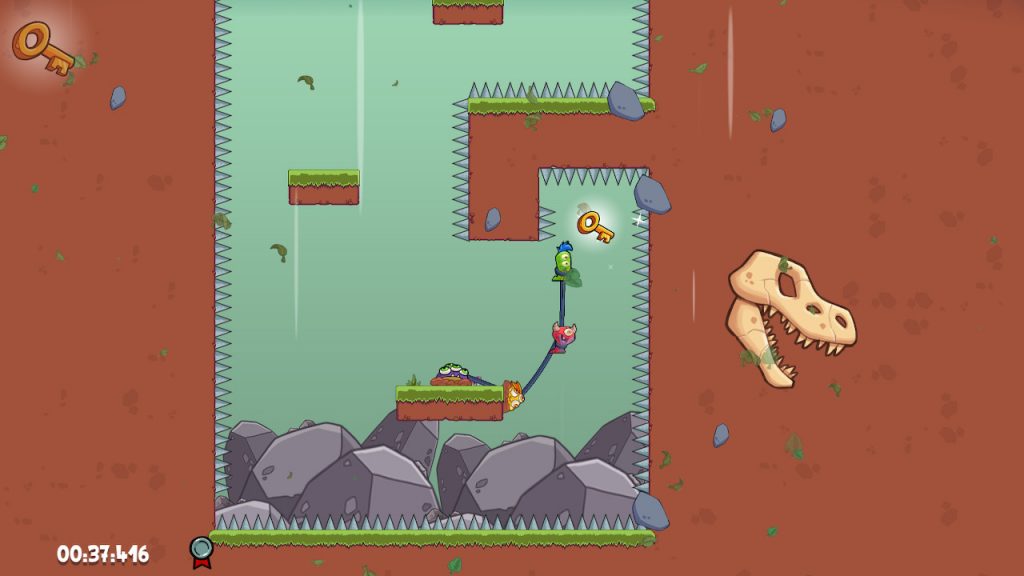 Only through teamwork could we hope to reach such unimaginable heights!

Finally, I’m not sure why this game has literally zero single-player content. Had this game been beefier, I don’t think that I would have had this problem. However, given how quickly you can finish it, I don’t think that what I’m asking for is anything ridiculous. I’m aware of the premise of the game is that the player is tethered to other players, and that traditional single-player levels might not be the right choice here, but something akin to a “challenge mode” might not have been a bad idea.Not only would it allow players an opportunity to fly solo, but it would also give the developers an additional opportunity to throw in some additional creativity into the mix.

Not Quite Fit to be Tied

Do you remember those flash games from the early-mid 2000s on sites like Newgrounds, Kongregate, and Armored Games? Well. That’s basically what Tied Together is; a flash game given life on the Switch. It does have a very cool concept, but it doesn’t play around with it nearly as much as it should. It’s fast, boring, and forgetful. And, unlike the flash games of yesteryear, Tied Together actually costs money. Now, if you’re really hard up for a new multiplayer game, then you might get an okay 30 – 60 minutes or so out of this game. Outside of that, however, you’re better off picking something else up.

Full disclosure: This review is based on a copy of Tied Together given to Hey Poor Player by the publisher.

Coromon Will Capture Your Heart This March

Who said there is no such thing as a free launch?   Although content delivery platforms have a mixed reputation, no one can argue that there’s a huge appeal…