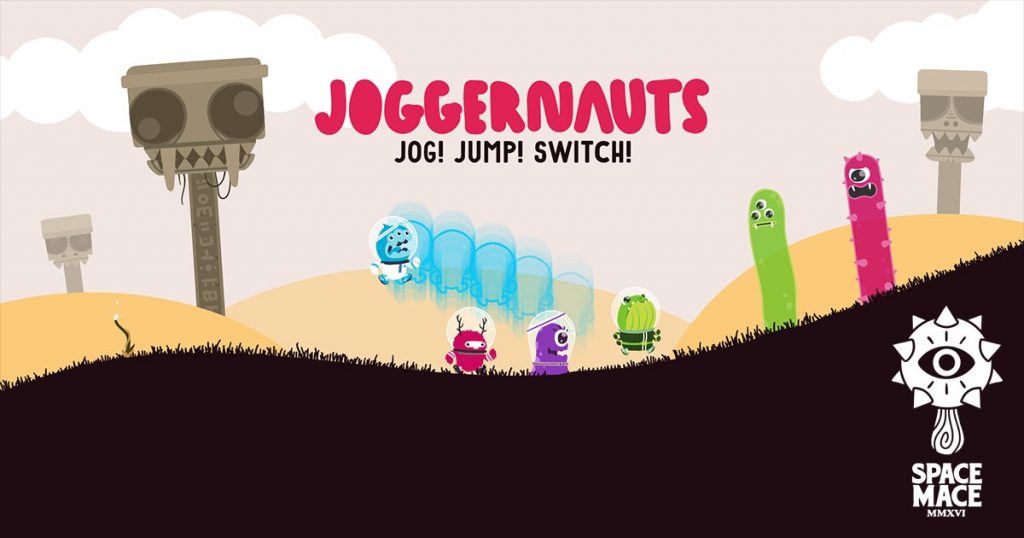 Couch co-op has seen quite a rush in quality over the last few years. Titles such as Lovers in a Dangerous Space Time, Dungeon of the Endless, and Overcooked managed to set my soul on fire. Even Mario Party managed to finally find its groove again with the recently released Super Mario Party. Finding something that is, both, fun for me to play yet also appealing to a wide range of players is a very challenging endeavor to embark upon. But, thanks to the fine folks at Space Mace, I think that I may have found my next great surprise wonder in the form of the game, Joggernauts. 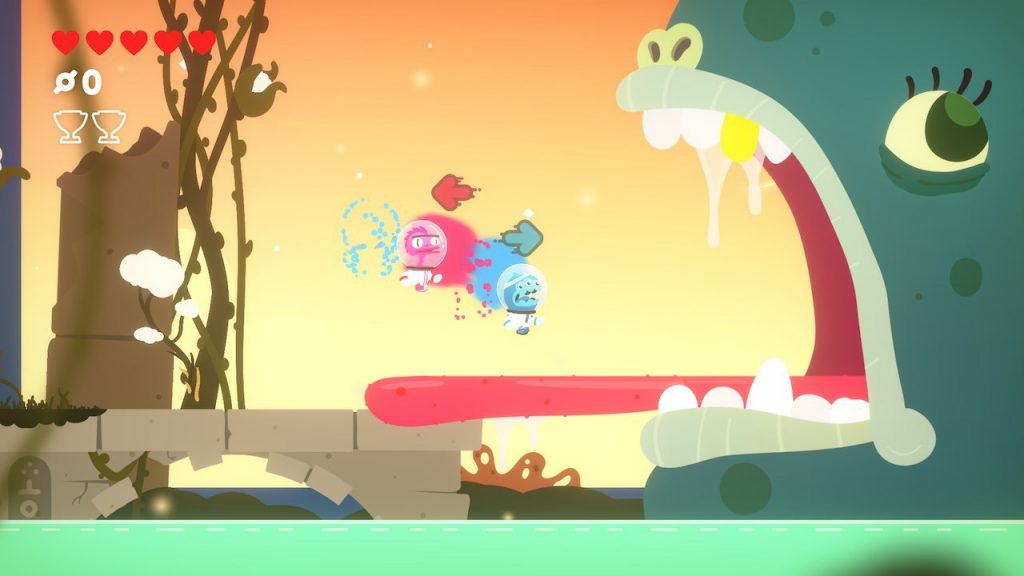 At its core, Joggernauts is an endless runner platformer. And if that were all that it was then it wouldn’t be much to write home about. However, the thing that makes this particular gem shine brighter than many of the other rocks in the pile lies in the fact that it is actually a co-op endless runner. Two to four friends take on the roles of different colored aliens that have crashed landed in a strange land. Their ship – destroyed! Their friends – scattered! And, most importantly, their robotic coach’s athletic trophies – MISSING! Together, these 5k frenzied friends need to chart out into the unknown reaches of this locale to remedy all of these unfortunate problems.

The gameplay of Joggernauts consists of the alien companions running forward, from left to right, in a straight queue. Each player controls just one of the aliens. As they progress, obstacles will appear in an attempt to deter their progress. These obstacles range from floating platforms to barricades to strange alien creatures.  Floating platforms can typically be surmounted through the use of well-timed button presses to jump across them with each player being responsible for their spacey avatar. Alien creatures, on the other hand, can be defeated by allowing a player that matches the color of the monster to collide with it. With the press of a button, a player can force their way to the front of the running queue in order to position themselves for impact.

This may sound like a simple task to accomplish but the level designers made sure to really make the most out of the queue position swapping mechanic. Enemies come clustered together in various color sequences requiring swift positional adjustments in order to clear the path for survival. Other times, platforms may be transparent and unusable until the proper colored alien lands on it, thus allowing the others to safely walk across the newly opaque ledge. These and other obstacles await as well that make use of lead jogger color swapping. To further break the brains of players, there will even be moments where it will be necessary to not respond with the displayed color.

Players share a communal pool of lives and, each time that a mistake is made and death is the result, one life is lost. Resurrection comes fairly quickly after a life is lost. However, lose all available lives or have all joggers dead at the same time and players are sent back to the beginning of the stage to try again. For stages that are particularly brutal, there are checkpoints that can be unlocked on each level that can be unlocked using currency collected by like-colored aliens scattered throughout each stage. Power-ups appear on stages as well that can be used up until death. The most common ones being a double jump jetpack and a one-hit absorption shield.

This Aint No Space Walk 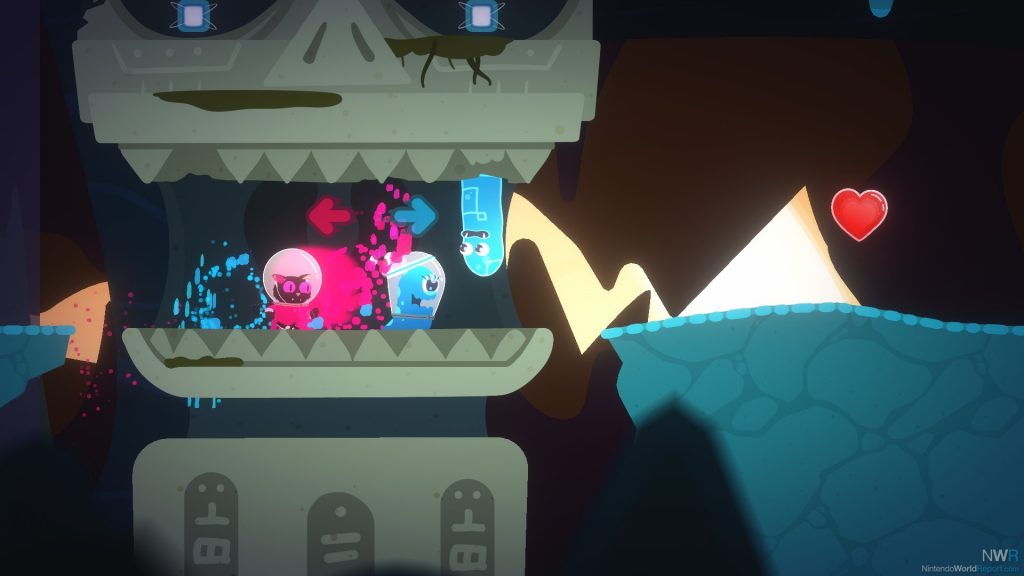 If this sounds challenging to you now then “MISSION ACCOMPLISHED!” because this is a fact that absolutely needs to be conveyed. But it also can’t be stated enough just how addicted this gameplay loop happens to be. Controls are pretty tight so deaths can’t be attributed to “that cheating game!” Though I still made sure to try to pass the buck to it anyway! Retries come quickly so that a subsequent attempt is seconds away and the “one more time!” effect is easily triggered.  This became further compounded as I was playing and laughing with my friends during hot swap two-player sessions. We’d yell at each other about when someone jumps to the front of the queue in a hasty panic before they were due. We would scream triumphantly after finally managing to crawl through a level, battered and bruised, with few of the stage’s trophy collectibles. Then, we’d look at each other, grin, and say “let’s go back and get those trophies!!” Challenging multiplayer games that can strike that cord with multiple people at once are a very special thing.

In the event that some co-op buddies can’t be located, there’s a single player option available in Joggernauts as well. In this case, one player can control two aliens at once. Each alien is given a jump button and one other button is used to switch between the two of them. It gave me memories of playing The Adventures of Cookie and Cream on the PlayStation 2 so many years ago. This also comes across as being very easy but this is a deception of the cruelest as, like in the aforementioned game, I found myself screaming about how I was making such “simple mistakes” before stepping into the fold for one more shot at the gold! Admittedly though, the true shine of this title lies in the multiplayer aspect but that doesn’t mean that the single player should be ignored for some occasional stage progression or some trophy collecting.

Between the chipper music, the colorful environments, and the tight challenging platforming, I feel hard-pressed to find something about this game to dislike. It has definitely moved up the line to become one of my Nintendo Switch titles to break out when I can get people to sit down and play as a group. If there is a need for that next big laugh-inducing game to break out at game nights, then Joggernauts would likely be one of the safest bets to drop your cash on this year to serve that purpose!  Comes highly recommended from me!

Full disclosure: This review is based on a copy of Joggernauts given to Hey Poor Player by the publisher.