Not Quite Beyond Redemption 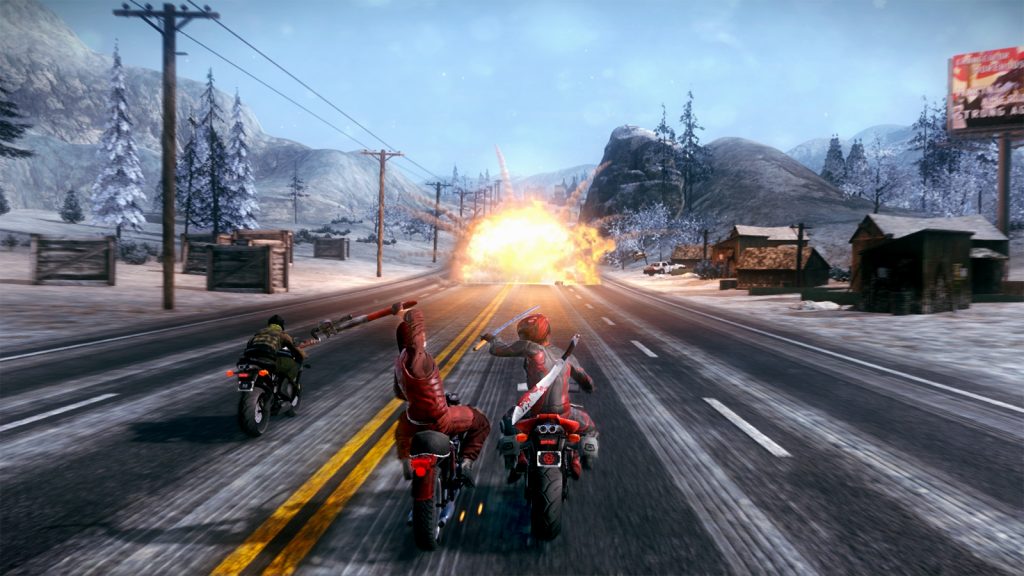 If you’re a 30-something gamer like me, then you’re probably already familiar with Road Rash. Originally released on the Sega Genesis, the series turned the motorcycle racing genre on its head by introducing a healthy dose of fisticuffs into the mix as racers pummeled one another with baseball bats, chains, clubs, and more. A smash hit for developer Electronic Arts, the franchise was all the rage in the early 1990s and eventually went on to spawn a number of sequels across numerous platforms and console generations.

Now, nearly 20 years since we last saw the series in Road Rash: Jailbreak, developers Pixel Dash Studios and EQ-Games have released Road Redemption. The spiritual successor to Road Rash, this brutal bike racer wears its inspiration on its motorcycle jacket sleeve with its bone-crushing combat, high-speed races, and plenty of over-the-top action. But does it manage to capture the magic of the series that inspired it? Read on and find out! 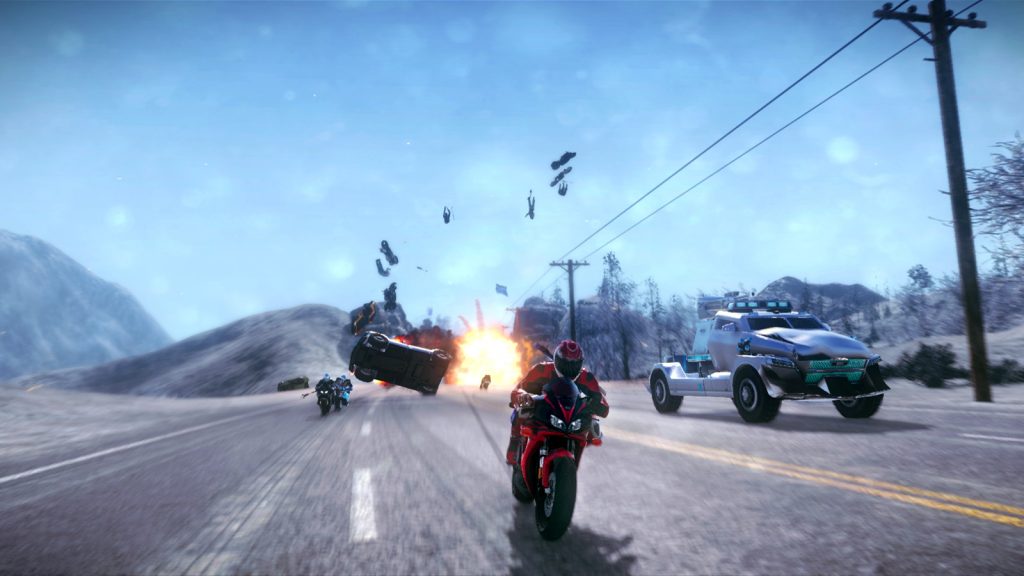 Without a doubt, Pixel Dash Studios and EQ-Games obviously did their homework here. When it comes to emulating the look and feel of a Road Rash game, Road Redemption largely delivers the goods. From the chunky guitar riffs that play during each race to the way your racer clobbers cops and rival bikers with all manner of blunt objects, Road Redemption does a solid job of emulating the games that inspired it.

That’s not to say Road Redemption doesn’t have a few good ideas of its own. The game actually features some roguelike elements to spice things up. For starters, the health and nitro you lose during a race carry over to the next stage. You’ll need to spend the money you earn by killing enemies and winning races to buy health-restoring items, new weapons, expand your ammo capacity (yes, you get guns!) and more. And if you die – and trust me, you’ll die plenty – you’re booted back to the title screen with nothing but the experience points you earned to show for it.

Thankfully, after you die, you can spend those points to unlock permanent upgrades. These upgrades include a variety of buffs that help you deal more damage, become proficient with more weapons, and more. In addition to these passive abilities, you can also use experience points to unlock shortcuts which allow you to skip ahead a few levels in the campaign. And with how often you’ll be restarting the game, you better believe these shortcuts are a godsend. 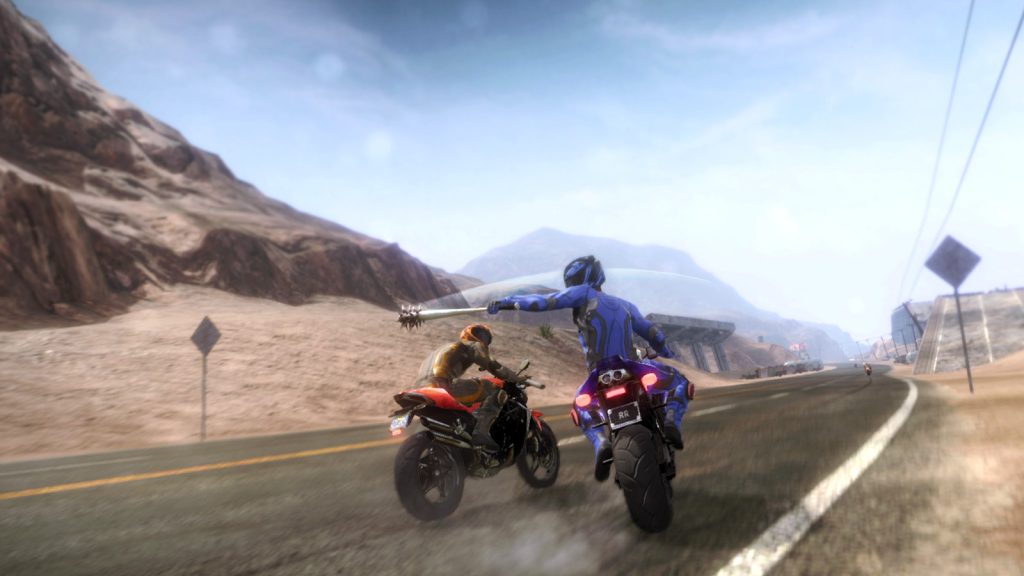 Blunt weapons can crack a helmet, leaving enemies open to the business end of your sword.

If there’s one area where Road Redemption succeeds, it’s the combat. Much like Road Rash, players can pummel enemies with weapons to dispatch them. Or, if you’re feeling especially sadistic, you can kick a rival racer to send them careening off a bridge and into the valley below. Weapons have different properties, which affects how well they perform in battle. For example, bladed weapons can quickly lob an enemy’s head off. However, they’re virtually worthless against enemies wearing helmets. That said, you’ll need to knock their helmet off with a hearty swing of a blunt weapon before you can butcher the opposition.

As you bludgeon your enemies, a critical meter will build up. And, once full, you can hold down the attack button to initiate a crushing blow that will kill most enemies with a single attack. This is especially helpful when battling racers marked with a shield symbol above their heads, as they’re invulnerable to standard attacks. Add to this a solid parrying system, firearms, and remote bombs and you have a recipe for some satisfying vehicular mayhem.

Strapping a remote bomb to a bike or truck and watching detonate in a group of enemy racers is hugely entertaining. Likewise, it’s hard not to cackle like a madman (or madwoman) as you bring down a trio of baddies with a single swing of a shovel. Sadly, Road Redemption‘s high-octane melees aren’t enough to beat back some of the nagging problems that plague the experience. 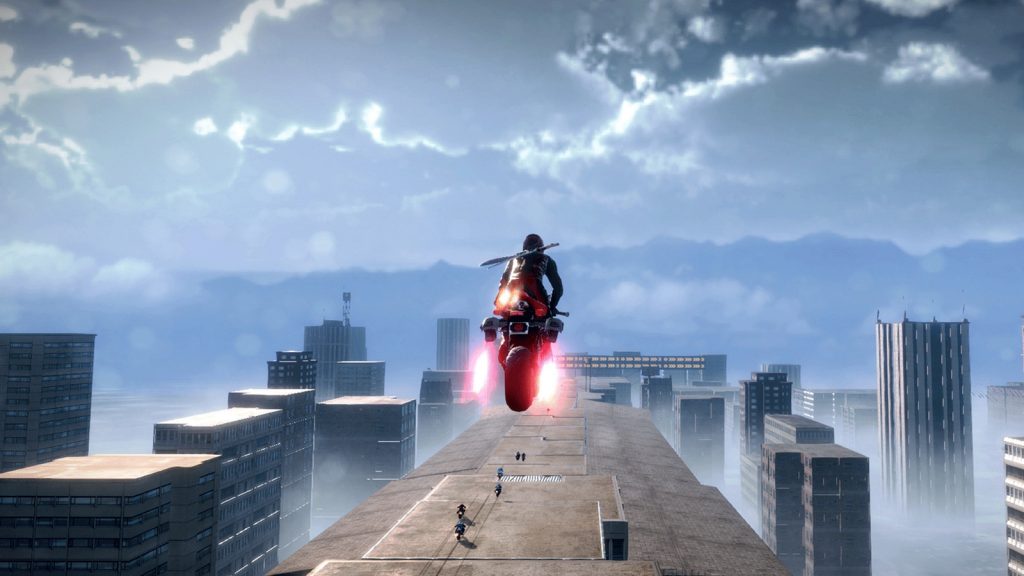 Jump jets are fun, but the randomly generated courses rarely feel optimized for them.

“Rough” is a word I’d use to describe much of the time I spent with Road Redemption. This isn’t just referring to the game’s rather dated visuals and barebones menus, either – though those do hurt the experience. During the hours I spent with the game for my review playthrough, I encountered an ungodly amount of bugs and weird physics glitches that made the game a real chore to play. While watching your racer clip through a solid guardrail and hurtle towards the horizon like some deranged superhero is fun the first few times, it quickly wears out its welcome when you’re met with yet another trip to the “Game Over” screen.

Other times I’ve seen a rival CPU racer move at speeds that are simply impossible to match (I’m talking several times faster than the best bike you can unlock) on the race progress meter, which is not only cheap – it also robs you of your prize money which could mean the difference between life and death in the next race. Add to this some seriously floaty controls and rubberbanding enemy racer AI and things start to fall apart. The game’s roguelike nature doesn’t leave a lot of room for failure. And honestly, that’s something I can usually get behind. But when you’re killed time and time again by cars that appear out of thin air or find yourself losing a race because your bike became lodged in a solid wall, things get frustrating pretty quickly, level warps be damned. 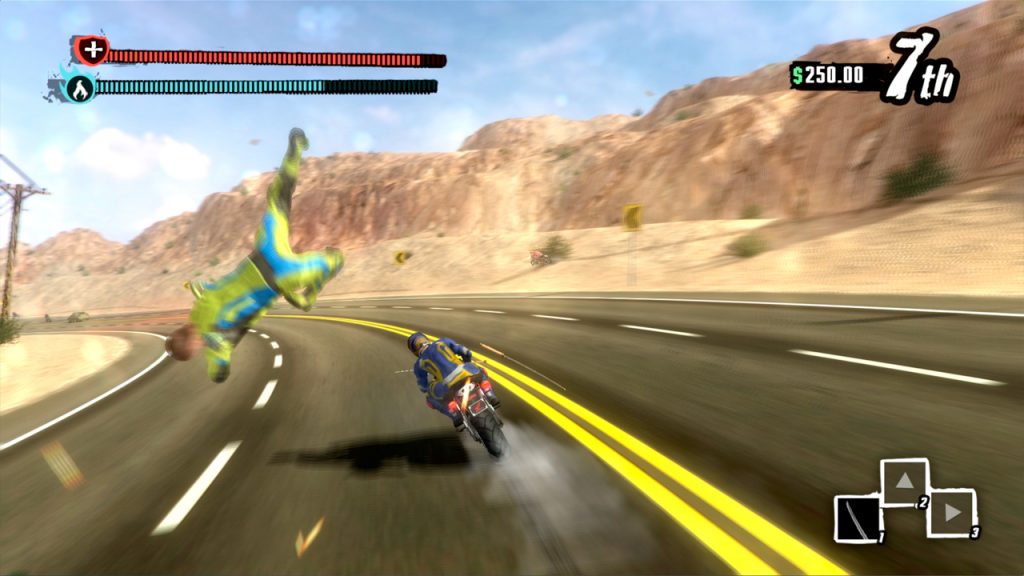 As much as it pains me to say it, even without these glitches, it doesn’t take long for Road Redemption to wear out its welcome. That’s because there simply isn’t a whole lot to do here. The mission types repeat far too often and quickly become stale. With more exciting tracks to race on this might not have been so bad. The thing is the game’s 16 courses are set over just three environments, desert, city, and mountain, and none of them are particularly exciting. Though I have to admit I did get some enjoyment out of the jump jets you unlock in the city stages, which let you bound from rooftop to rooftop. It’s just a shame the sloppy course designs aren’t better suited for them.

One area of the game I did enjoy, however, is the four-player cooperative mode. Playing on the couch with four like-minded speed demons can be a real blast, and can make tearing through the game’s punishing campaign a little easier. Watching the screen light up as you and your pals strap explosives to any and everything with wheels is a riot. And there’s nothing more satisfying than using a spiked bat to play tennis with the head of a hostile biker. The game also supports online races for up to ten players. However, I was barely able to find more than a few other players online at any given time. Here’s hoping the online community grows over time, as there’s some potential for fun to be had here.

Road Redemption isn’t bad, but it doesn’t quite live up to its inspiration thanks to its unpolished design and repetitive gameplay. With little variety spread throughout the game’s often buggy campaign, it’s hard to imagine most players coming back for more than a few quick and dirty races after spending a few hours with the game. Cooperative play does help some, but after you’ve burned through the game’s 16 missions there’s little reason to come back for more. If you’re desperate to scratch that Road Rash itch, Road Redemption might give you some slight satisfaction. Just know that there are better combat racers out there.

Full disclosure: This review is based on a copy of Road Redemption given to Hey Poor Player by the publisher. 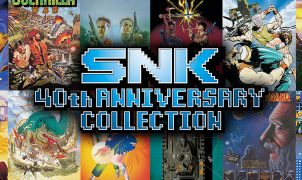