Having your game situated as an “FTL-like” is certainly purchasing some comically big Sideshow Bob-esque shoes to fill. Faster Than Light casts a gargantuan shadow over the roguelike genre, yet Interactive Fate’s new spacebound title has the unenviable task of taking on FTL.

Shortest Trip To Earth puts the player in charge of a spaceship whose warp drive has malfunctioned, hurling the hapless vessel deep into space. Now the intrepid crew must make their way home, fighting their way through space pirates, monstrous aliens and a litany of space-bourne environmental hazards. From a top-down persepctive, you have to click your crew to walk to their stations on the ship and target weapons at the systems of enemy vessels you want sent into the vaccum of space. Along the way there are plenty of planets, space stations and interstellar anomalies to explore. There was even a giant cosmic entity that supposed what was loosely translated as “SEX” with my ship, with surprisingly positive results!

Sometimes You Can Choose Your Fate 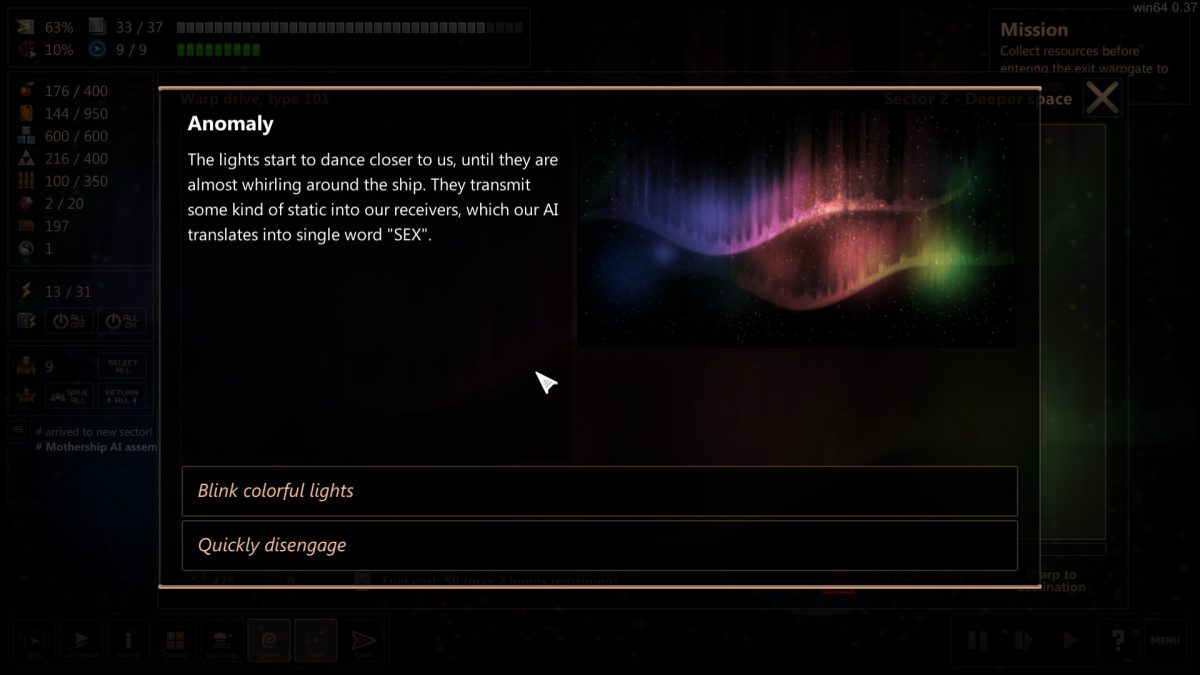 This didn’t go as badly as you might expect!

Whereas FTL was much more about constantly wearing your ship down with disaster management, STTE puts more emphasis on inter-disaster resource hoarding and ship optimization. What’s very convenient about Shortest Trip to Earth is just how adaptable each ship can be. If a module on a ship is not performing the way you’d like, you can simply pop it into storage and replace it with another one. For example, if your ship is running critically low on the life-sustaining organics, it might be idea to temporarily switch out the sensor array for a mushroom-growing shroomery to stave off starvation of your crew.

An interesting aspect of STTE is the “fate” system where each run-through lets you accrue “fate points” to spend on upgrading the ship on your next go-around after you’re inevitably blown to smithereens. And this often encouraged me to “pay it forward” by choosing the more altrusitic or “interesting” options, as even if it didn’t help me in my current run-through, it’d help me in the next. Since you can start your journey at any of the ten “stages” you’ve reached with any ship, the journey on STTE is a more metaphysical one where progress can be build on the debris of countless of your destroyed vessels. 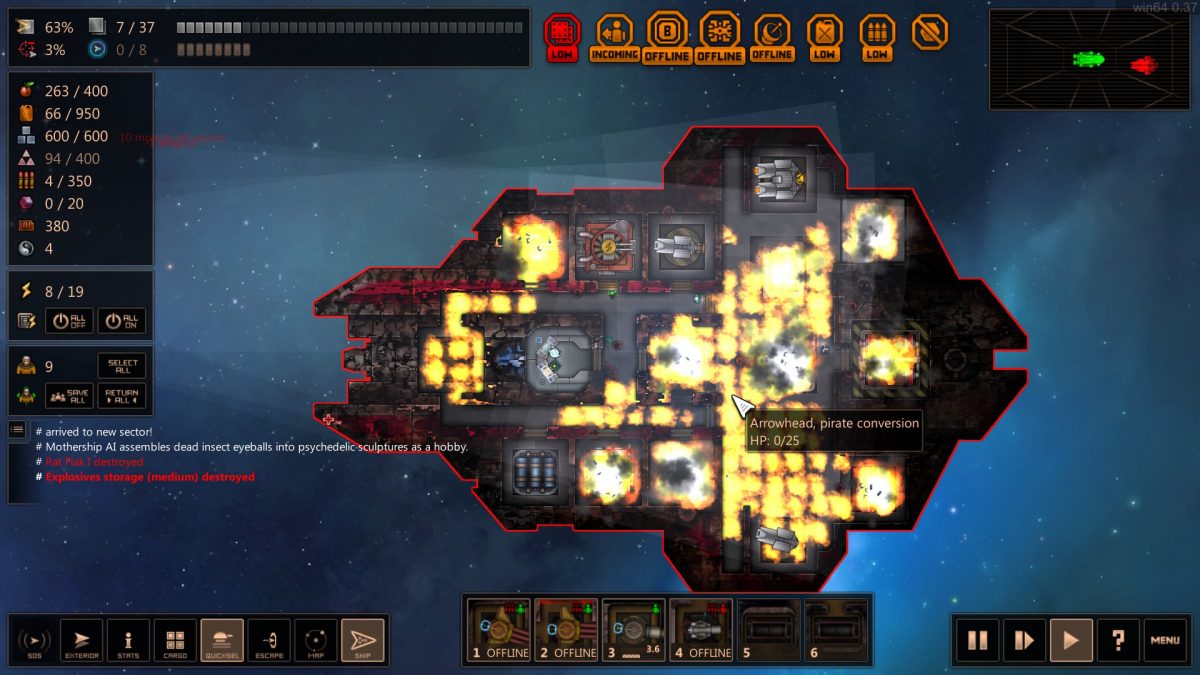 On this point, I do worry how much “capital missiles” are something of an “I win” button for combats. Provided you’ve got one installed, you can send a whopping great mega-missile careening towards an enemy ship with too much HP for most point defense modules to shoot it down. It will cause massive damage over a wide area, often sending crew-melting, ship-frying flames in every direction, crippling multiple modules and putting the receiver completely on the back foot for the rest of the combat. This can be particularly devastating because if a module is hit badly enough, it cannot be repaired and is just destroyed entirely. Likewise, repairing the ship requires a healthy amount of metal resources for hull and synthetics for modules, so you’re doomed if you find yourself low on them. Battles feel a little bit skewed towards becoming less dynamic if one combatant gets an early advantage because ship damage is more devastating, more permanent and harder to repair than in FTL.

Having said this, combat is multi-dimensional with the inclusion of boarding. You’ll frequently find intruders firing themselves over to your ship in rocket-propelled capsules to give you grief. This did turn the tide of one battle that I was winning decisively on a ship-to-ship level, but my crew was being whittled down. In the end, after both enemy ships were destroyed, my lone bridge-operator faced down with a multiple-armed insectoid alien. The RNG sealed my fate as I watched my crewman’s bullet careen wide of the interloper, but his opponent’s acid gun hit – turning my last crewman into a pile of goo. There’s not a lot of strategy or tactics you can employ when fighting in close-quarters sadly. You click on who you want crewmen to engage and let the RNG do the rest.

Packing For Your Star Trek 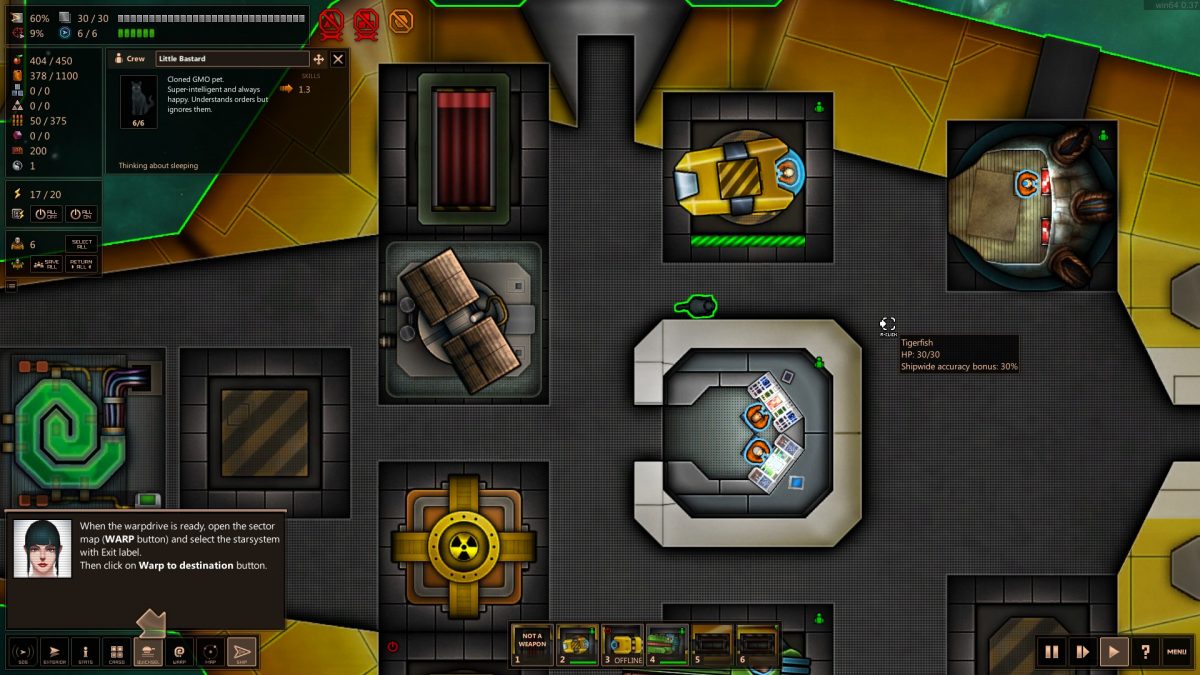 Whereas cost-benefit analysis traveling around in FTL was as simple as one unit of fuel for one jump, STTE is much more granular, with every trip within each solar system requiring fuel and organics (food and medicine) supplies, dependent upon a variety of factors. It you’ve got lots of gas-guzzling heavy reactors installed, duel will drain much more quickly, and if you’ve got a lot of crew milling around then your organics depletion will be increased. Adding to this complexity is how there are special ship modules that run counter to standard mechanics, such as an experimental reactor that runs on organics instead of fuel (so biofuel spaceships are a thing!) Though having crew at the ready is helpful for them to man the guns or shield modules (giving them a handy bonus to accuracy and regeneration respectively) keeping them on duty will make them consume more food whereas you could simply store them in a cryosleep chamber. It’s a sign or just how much minute micromanagement is required to keep your supplies sufficient.

For all that’s good about Shortest Trip To Earth, there are still plenty of niggles and quality-of-life problems in this early build. For example, sometimes it’s annoying that though you can slow down time, there’s no ability to speed things up. This is particularly tiresome when the ship’s crew need a trip to the medbay and they have to slowly walk over, sit in the chair – one at a time – before gently ambling back to their stations. There’s much more scope for automating this process or speeding up time to make it less tedious – hopefully the final game will be streamlined.

Also, I found some other odd missing features such as how I seemed unable to equip my unarmed crewmen with better weapons to repel boarders, leaving my bridge crew left to repel machine gun wielding boarders with fists. Then there is, sadly, the ship’s pet (a cat in my experience) who tends to be the first casualty of any boarding attempt. I enjoyed how you could give the cat orders but – as its biography states – it always ignores them. It was another cute part of Shortest Trip To Earth’s cute, light-hearted feel, and this made me particularly sad how every incarnation of my stellar feline tended to get killed by invaders. It would have been handy if I could have genetically engineered the creature to defend itself with some cybernetic kitty claws or something rather than sadly watching it be cannon fodder over and over.

Shortest Trip to Earth shows the signs of being a labour of love from a 5 year long development cycle. While not having the artfully simple pick-up-and-play simplicity of FTL, Shortest Trip To Earth has a slower pace and more in-depth, thoughtful gameplay. I’m looking forward to finishing the trip back to Earth when the full game releases. 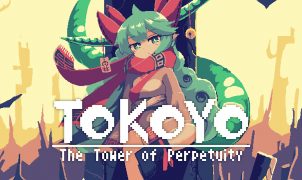 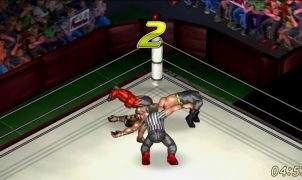 #NoTap   In the span of a few short years, between 1998ish and 2001 or so, I learned about emulation, Fire Pro Wrestling, and read Mick Foley’s book –…