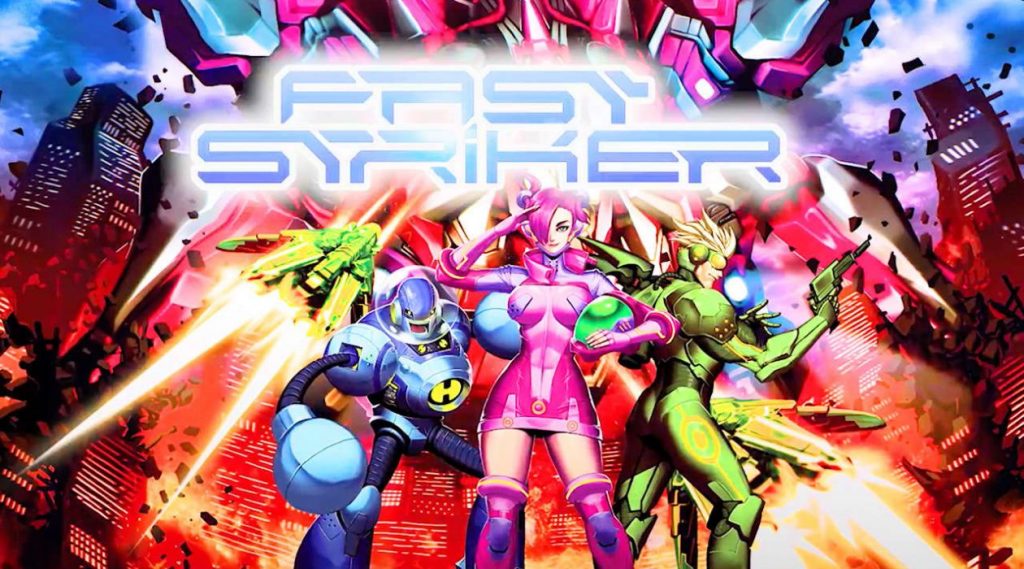 Over the past decade, German indie outfit NG:DEV. Team has been keeping the Neo Geo alive with a handful of standout titles such as the Turrican-inspired Gunlord, soul-crushing horizontal shooter Last Hope, and, most recently, the Metal Slug spiritual successor Kraut Buster. Now, thanks to the fine folks at EastAsiaSoft, the retro-minded developer’s punishing 2010 bullet hell shmup Fast Striker has found its way to the PlayStation 4 and Vita, allowing those who’ve long since ditched their retro consoles a chance to see what all the fuss is about. But was it worth the wait? 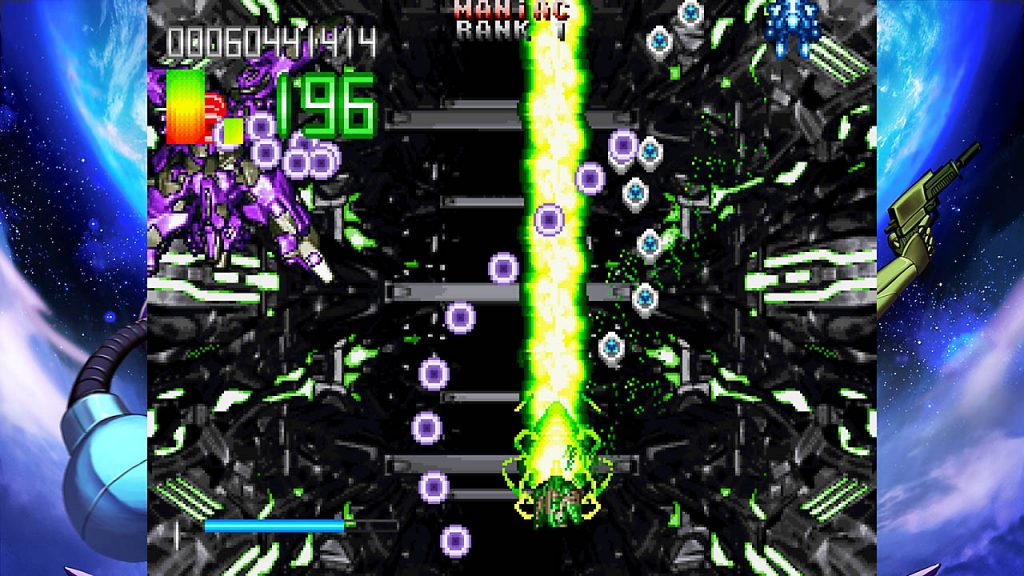 True to its name, Fast Striker is a bleeding-fast vertical shooter in the vein of such classics as Ikaruga and DoDonPachi. The goal of the game is simple: fly through a variety of sci-fi settings and blast the hell out of waves of mechanized terrors and enemy spaceships, all while dodging thick curtains of enemy bullets and racking up those precious points. It’s a simple, time-tested formula that anyone who frequented the arcades of the 80s and 90s should be very familiar with.

That’s not to say Fast Striker doesn’t do a few things to spice up the formula. For starters, unlike most shoot ’em ups, there’s no character select screen to speak of. Instead, the ship you pilot is determined by which of the game’s difficulty modes you select. There are four of them to choose from; Novice, Original, Maniac, and Omake (extra), with each mode offering updated enemy and bullet patterns, ships with unique attack patterns to master, and their own twist on the game’s scoring system.

For example, Novice Mode puts you in control of a nimble ship that packs a rapid-fire blaster which, when tapped rapidly, evolves into a spread shot. Meanwhile, Original Mode has you taking to the skies in a ship that exchanges rapid shots for slower, more powerful missiles that can turn the biggest robots to space dust. Both of these modes put an emphasis on collecting medals (along with gold chunks in Original Mode) to beef up your score.

Meanwhile, the game’s latter two difficulties, Maniac and Omake, are geared towards veteran players who know their way around the cockpit. Both modes put an emphasis on riskier, more aggressive playstyles, ditching the rockets and bullets for a handy Grind beam that can obliterate waves of enemies with its continuous blast of energy. You’ll need it, too. Because, rather than chasing down collectibles, Maniac and Omake feature scoring systems that revolve around chaining your kills to keep your score multiplier going.

Yeah, this system is a bit different than most fans of the genre would expect. But I found it to be pretty refreshing. Tying the ship types to the various difficulty modes encourages novices to leave their comfort zone to experience all of the craft the game offers, while the various tweaks to the game’s scoring system should keep veterans coming back for more – especially if they want to battle the game’s true boss. 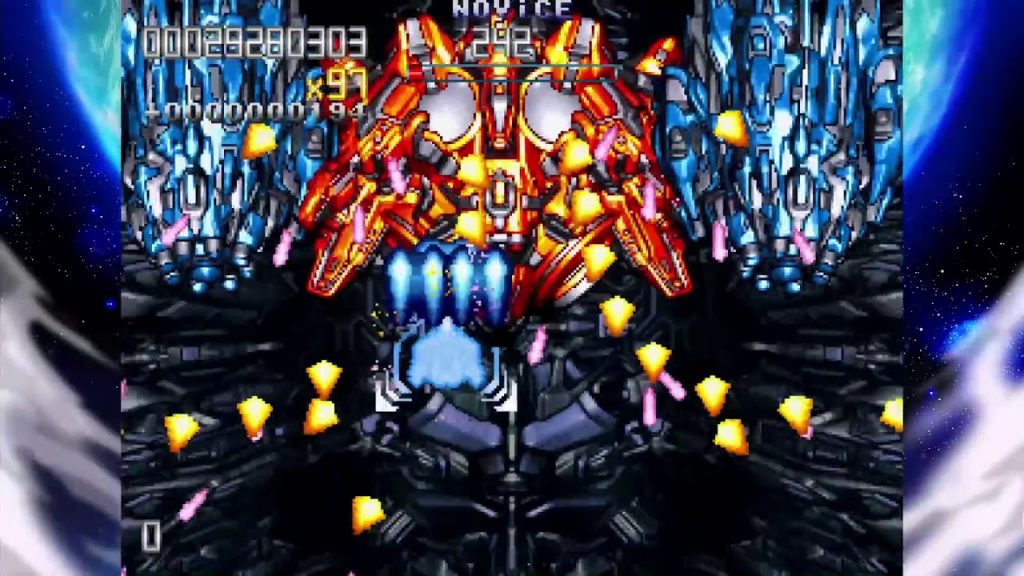 Fast Striker’s bosses are massive and will put your skills to the test.

There are five levels to master in Fast Striker. And each of these stages features its own unique threats to keep you on your toes. For example, one stage may have you timing your movements to avoid a laser grid that extends across the entire stage. Another stage takes things even further by forcing you to navigate through a claustrophobic maze of enemy ships, all while being bombarded from all sides.

As you’d expect, each stage is capped with a boss fight. Honestly, most of these metal monstrosities aren’t too difficult when played on Novice Mode. However, dialing up the difficulty results in some thrilling encounters that will turn the screen into a hypnotizing bullet ballet that should satisfy even the most jaded shooter veterans.

Between the various hazards that fill each stage and the satisfying boss battles, Fast Striker can be a real treat. And mastering the game’s four difficulty modes with their various ships certainly adds some replay value to the package. Don’t get me wrong, though. Fast Striker is hardly a bullet hell banquet. With no real updates over the Neo Geo original such as cooperative play or online leaderboards to speak of, the game feels undeniably lean when compared to most other shooters on the market today.

The game does feature a handful of visual options though. My personal favorite of these was the scanline filter that does a good job of replicating the CRT experience. Additionally, EastAsiaSoft decided to make Fast Striker Cross-Buy title. This means you can get your danmaku fix at home or on the go without doling out any extra cash. 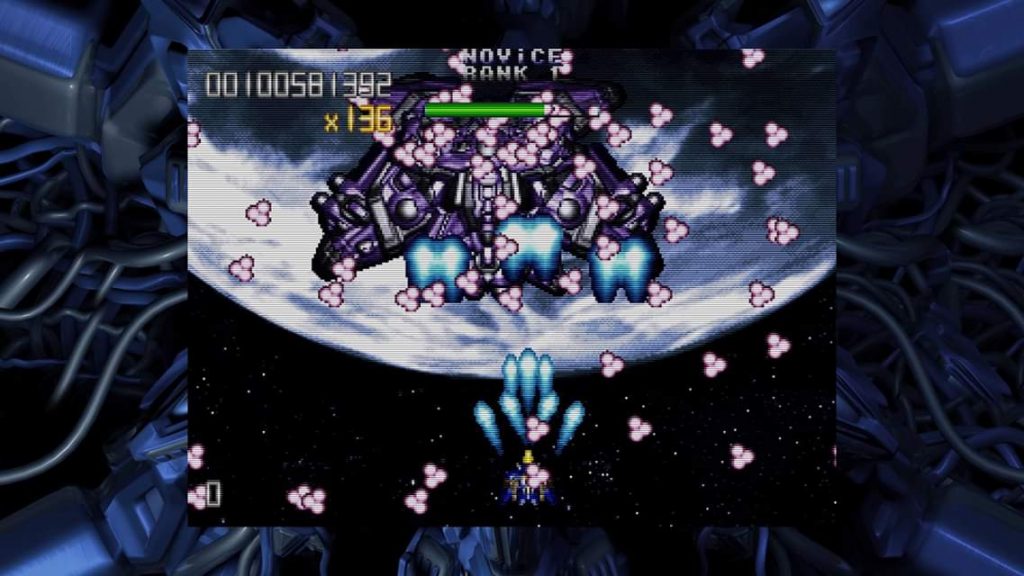 Check out those swanky scanlines!

As I said, this is essentially a direct port of the 2010 Neo Geo game. This means you’re more or less getting the same experience we saw on SNK’s 16-bit powerhouse, warts and all. When it comes to the game’s flashy, pre-rendered boss sprites this is definitely a good thing (especially if you happened to enjoy the Neo Geo classics Pulstar and Blazing Star). Unfortunately, the same can’t be said for the stages themselves. Each of the five areas you’ll soar above is crafted in a garish, monochromatic style which makes them all kind of blend together. Given the game’s rather brief runtime, it’s a shame NG:DEV didn’t do more to give Fast Striker‘s stages a bit more visual identity.

Thankfully, the game’s soundtrack is anything but forgettable. Fast Striker sports some of the most energetic techno arrangements this side of Espgaluda. Seriously, just give this track a listen and tell me it doesn’t get you in the mood reduce scores of enemy ships to heaps of space junk. It’s just that good.

Lacking many of the features we’ve come to expect from modern shmups, Fast Striker isn’t quite the out of this world shooter die-hards may have been hoping for. But its challenging boss battles, wealth of difficulty modes, and clever scoring systems should keep even the most jaded fans of the genre coming back for a few more loops. It’s just a shame staple features like online leaderboards or cooperative play are nowhere to be found, as they would have really helped round out the package. Still, if you’re looking for a quick and dirty bullet hell fix, Fast Striker will certainly scratch that itch.

Full disclosure: A review code was given to Hey Poor Player by the publisher.

A time for remembrance   I’m going to begin this review with a confession. Over the past several years, I’ve quietly made fun of KINGDOM HEARTS fans. I couldn’t…