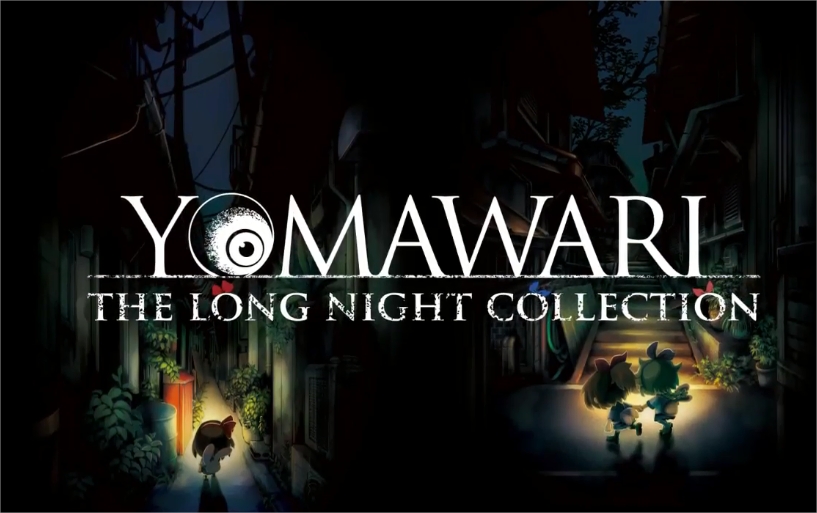 Nippon Ichi Software sure is going out of their way to celebrate Halloween this year, don’t you think? Between Disgaea 1 Complete having dropped earlier this month and us being mere moments away from the release of Disgaea 5 Complete PC, good old NIS is doing their best to amp up the Halloween vibes as much as possible. But they seem to have forgotten something with this month’s releases… the scare factor!

…Just kidding! The Disgaea double-header may be at the forefront of this month’s NIS hype train, but they didn’t forget that October’s all about getting into the spirit of scaring yourself silly – which is exactly why they picked this month to release Yomawari: The Long Night Collection (or so I’m assuming). And boy, are the scares ripe for the picking with this one! 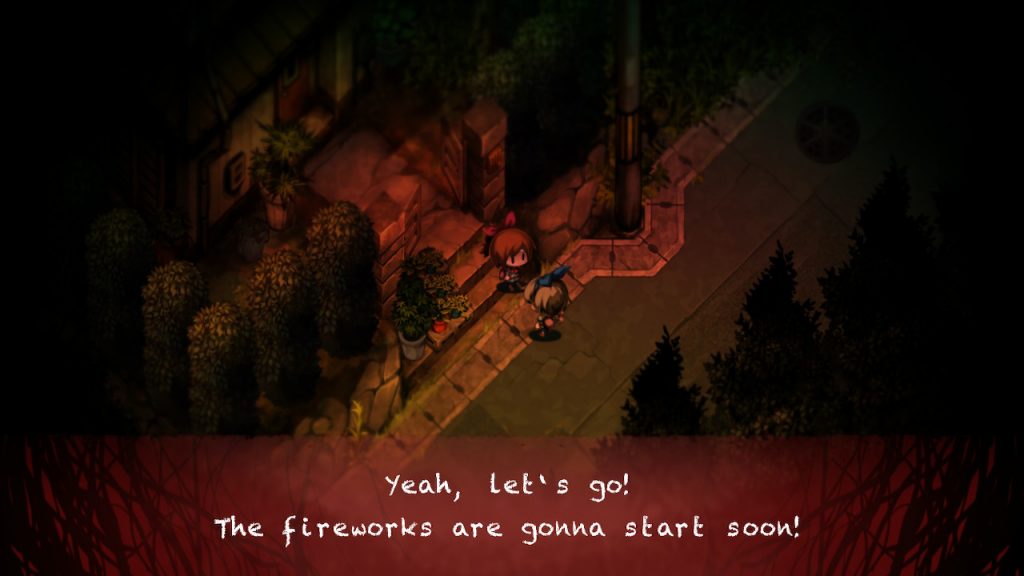 This scene becomes monumentally sadder after you beat this game.

Yomawari: The Long Night Collection, as the name implies, isn’t a single game (or technically even a new game by normal standards), but a bundle featuring both Yomawari titles. Yomawari: Night Alone, the first in the series duology, follows a young, nameless protagonist who, after accidentally getting both her dog, Poro, hit and killed by a car and her sister abducted by malevolent spirits in the same night, sets off on a harrowing adventure to rescue her big sis before it’s too late.

Wondering if Yomawari: Midnight Shadows, the sequel, is any happier? Well, considering how the game’s tutorial plays out (I won’t ruin it for you), I’d say that no, it isn’t. But hey, there’s more to the story than what’s in the tutorial. Midnight Shadows’ real narrative begins with friends Haru and Yui walking up a mountain to enjoy some fireworks. After watching the splendid display and sharing a bittersweet conversation about how they wish that they could be friends and stay with each other forever, they head back down the hill – only to realize that they’re being followed. Haru, trying to be the braver of the two, tells Yui to hide in a bush and wait for her to come back – which Yui does. …But Haru never comes back. Fearing for her friend’s life, Yui puts on her bravest face and begins her search for her friend – completely unaware of what horrors await the both of them. 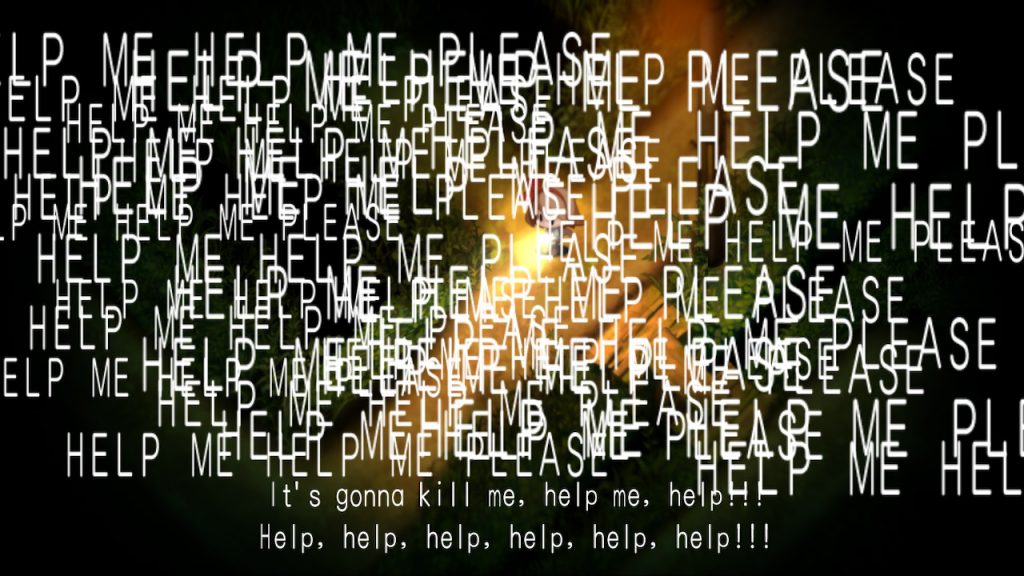 Just because you’re a spirit doesn’t mean that you aren’t in need of a helping hand.

Now, it might seem like both of these games have a similar narrative structure – but that’s only because they do. Love, loss, life, death, courage, fear, and more – both Yomawari stories have many things in common, and it’s especially easy to notice them when playing them back-to-back in TLNC. However, while I wouldn’t have minded a little less same-ness between the two games, I don’t think that the abundant narrative similarities are necessarily a bad thing. Without getting too morbid here the Yomawari illustrates that life isn’t always easy, nor fair and that there are paths which we all must walk – even if they look a little different from person to person. To quote the game itself, “life is scary.” But it also shows that, no matter who you are, or how weak you may seem, the human spirit has a way of enduring; that survival, love, and happiness are all possible. That, while nothing is guaranteed, you’ll never know what you’re capable of doing – or obtaining – if you don’t at least try. And it is within those sweet-yet-sorrowful truths, my friends, that the beauty of Yomawari’s stories lie. 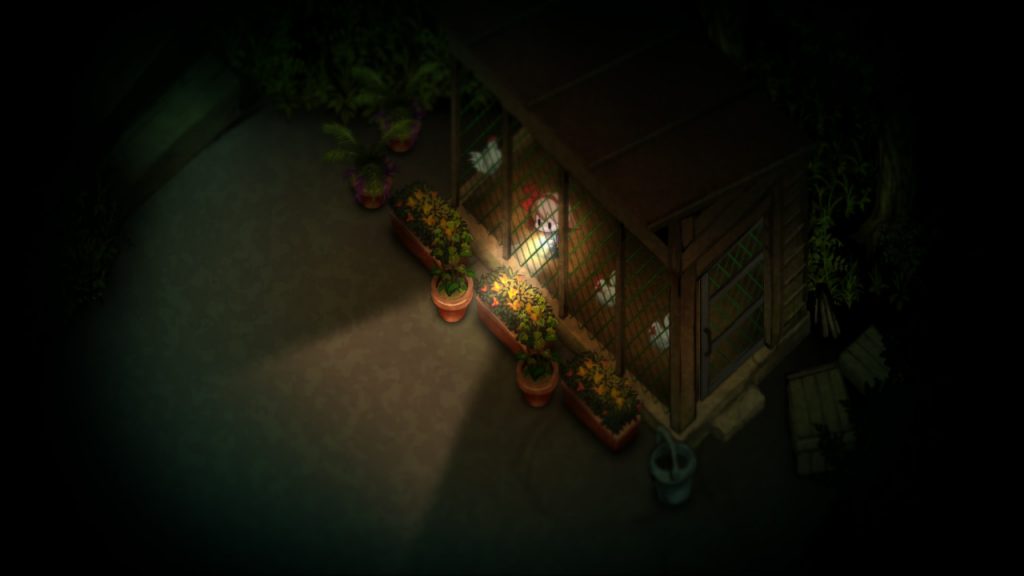 Hey! I may be scared, but I ain’t no chicken!

Comprising of one part survival horror, one part top-down, isometric adventure game, and adding in a huge dash of NIS creepy-cute artwork, the Yomawari titles are a pair that land firmly in the middle of a Frankenstein’s monster of a genre that I’ve never quite seen before. Although the games are quite linear, they’re presented in a pseudo “open-world” way, in which the player must explore their town (and collect an abundance of obligatory horror game trinkets) until – either because they were led by the game, or their aimless wandering took them there – they end up at where it is that they need to be in order to progress the story.

Now, here’s where the two games begin to diverge. In Night Alone (aka “Yomawari 1”), the entirety of the game takes place in one big area (which would be the town that you live in). While thematically different from each other in terms of both geography and “inhabitants”, the whole of Night Alone is connected and can be easily observed – and traversed – via the use of a single map. Due to the game’s somewhat repetitive nature, this could have been a problem if the game were lengthy. But it’s not – and because of that, Night Alone’s free-roaming nature works just fine. 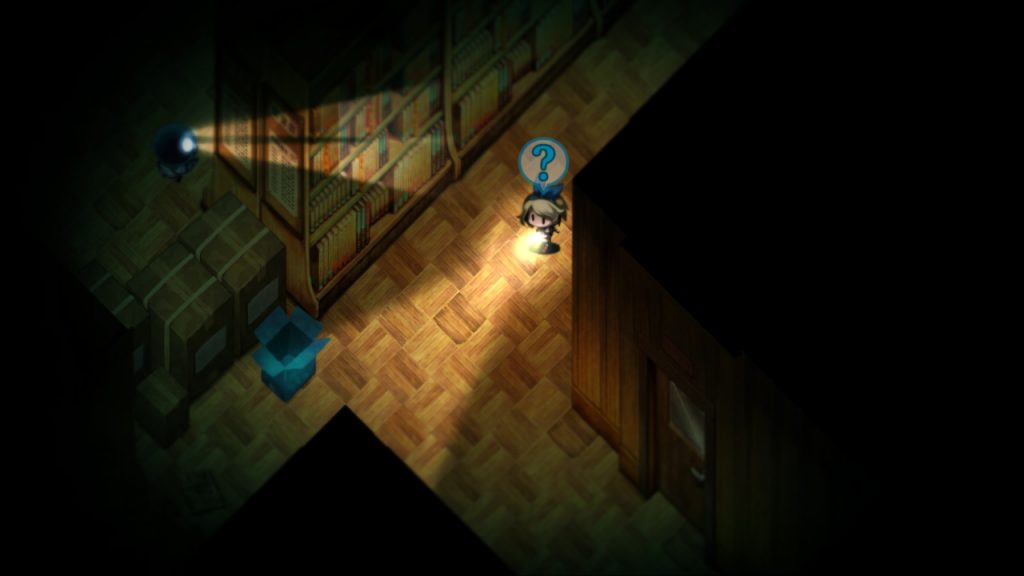 Avoiding spotlights, and hiding in boxes… why does this all sound so familiar?

Midnight Shadows (aka “Yomawari 2”) does things a little differently. While still making use of a town map (two of them, actually), Midnight Shadows adds in explorable buildings. Consisting of areas like the town library, an old mansion, and a sewer (that one’s not technically a building, but whatever), these map-less mini-areas break up the potential tedium that could occur within Midnight Shadows’ exploratory gameplay (as it otherwise plays almost exactly the same as Night Alone) by acting as dungeons. Even better, these areas also allowed Midnight Shadows to mix up the gameplay a little bit. Be it the mansion’s warping of the player from room to room, or the library’s literal stealth section, buildings end up being a great new addition to the Yomawari gameplay that’s fun (and scary!) without compromising what’s already there. 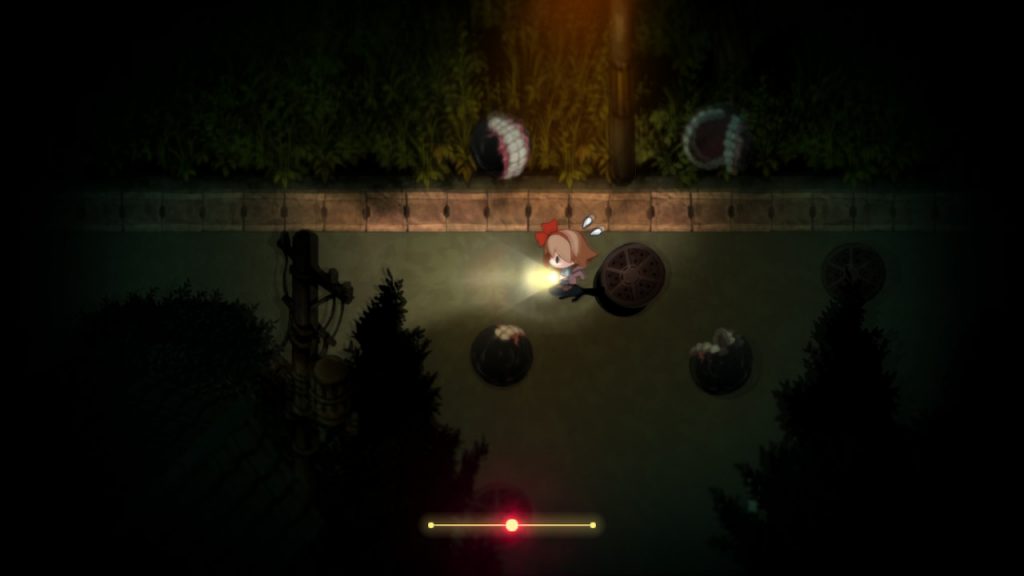 This, um… this looks bad…

I’ve already talked at length about all of the exploring that you’ll be doing in Yomawari, but that’s really only one half of what gameplay’s about in these games. The other half? Running away like a scared little girl, of course! That might be due to the fact that your characters are scared little girls, but I digress – you’ll be doing a lot of running (and a little bit of hiding, too), so you’d better get used to it.

I’m sure you’re already aware of this, but I’ll spell it out for you anyway; almost every single area in both Yomawari games is teeming with spirits. And about 99% these spirits that you encounter in this game hate you, want you dead, and will do their very best to make their wish into a reality. Fortunately, despite their ethereal nature, they’re not actually that great at finding you – but the same can’t be said of you with them! Whenever you begin to get close to a spirit, your character’s heart will start to beat loudly. The faster the heartbeat, the closer you are. It’s a simple mechanic, but one that you’ll be using constantly. Objectively, Yomawari does a great job with this overall. Not only is it well-implemented (which is good, considering its importance), but having to rely on a mechanic which literally consists of your character getting scared makes the game that much scarier itself. 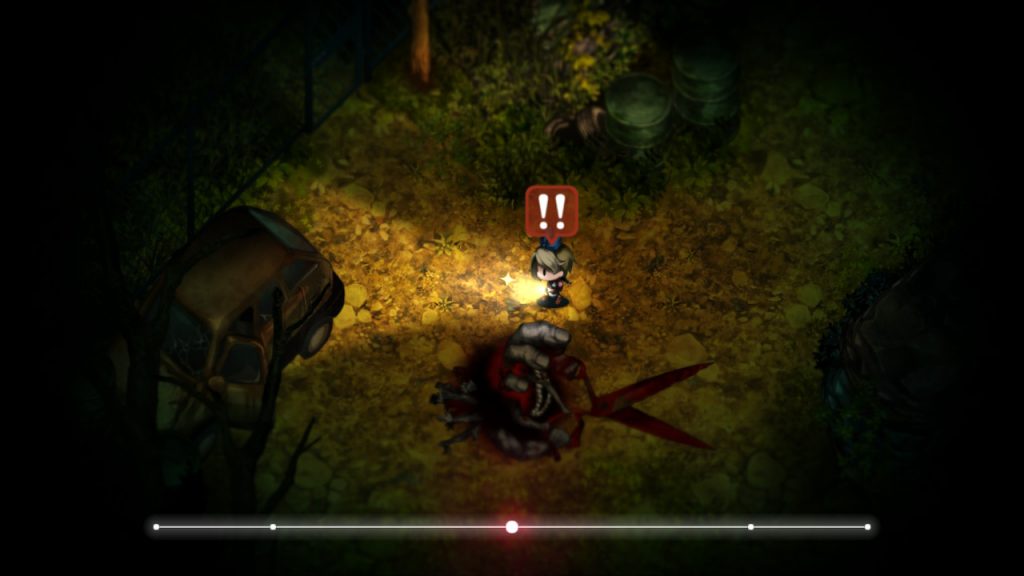 These spirits sure are cutthroat, eh?

Your heart alone isn’t enough to keep you out of danger, though. No matter how good you are, you’re going to get spotted plenty (sometimes even on purpose). Truly living up to its nature as a survival horror, most of your encounters with spirits will end up with you running for your life in the opposite direction. The good news? You’re actually faster than most of them. The bad news? Frightened children make terrible marathon runners. Stamina, which is needed in order to run, decreases very quickly in both Yomawari games (although it seems like you have a little bit more in Midnight Shadows), meaning that you have to not only be ready to run at a moment’s notice, but that you also have to run carefully. Depending on the situation you can also use items to distract spirits or hide behind a conveniently placed bush or sign, but keep in mind that the only real way to ensure your safety is to get the hell out of dodge.

Finally, let’s take a moment to talk about the spirits themselves. For as short as they are, the Yomawari games have an incredibly diverse cast of things that go bump in the night (and that goes double for Midnight Shadows‘ bosses!). This does, of course, enhance gameplay by ensuring that players never get too comfortable with the creatures that they encounter, lest they end up a bloody mess, but it also does something else. It makes the game way scarier! No, seriously, it really does. Just like the constant influx of new spirits means that you’re consistently having to learn new enemy behaviors, it also means that you’re never going to be entirely emotionally secure. What was that new noise? How do I keep this spirit from becoming hostile? What’s chasing me and why can’t I see it? The Yomawari series does an excellent job of instilling the fear of the unknown from the very beginning of both games in players – both mechanically and emotionally – and keeping it alive until the very end.

Demons may be king (or Overlord) when it comes to Nippon Ichi Software in most cases, but those looking to drum up some scares this Halloween should most definitely turn their attention to Yomawari: The Long Night Collection. The night may be scary, but there’s never been a better time to face your fears than now (and have fun while doing it)!

Full disclosure: This review is based on a copy of Yomawari: The Long Night Collection given to Hey Poor Player by the publisher.

An Encore Worth Waiting For     Music has always been a major part of my life in some form or another, and the ability for music to convey…