So, uh, this just got way better. 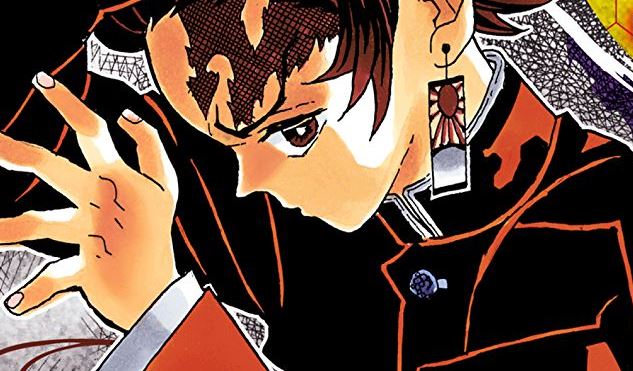 Okay, I don’t know what happened between Demon Slayer: Kimetsu no Yaiba’s first volume and this second iteration, but the first eight pages gripped my attention, drowned my heart in  melancholy, and kept both in its clutches throughout its nine chapters — a feat rendered even more incredible when you consider the serialization rendered chapters seven and eight only a week apart. We learned previously Kimetsu no Yaiba’s demons were originally human, but we weren’t privy to their prior lives until this volume’s opening; case in point, The Hand Demon that Tanjiro encountered last volume. Slayed by our protagonist’s hands, he mentally screeches and wails as he crumbles away. He refuses to shut his eyes for fear of death, but he can’t change where his vision points: the solemn face of a demon hunter pitying his demise, his existence as a foul creature.

It doesn’t end there – the briefest of flashbacks recalls a chilling humanity I dare not spoil, and Tanjiro’s benevolence afterwards is a genuine depiction of sincerity. It is the perfect blend of heart-racing despair and jaw-dropping humanization, a combination so riveting I cannot recall shifting my opinion any faster, for any other manga, than I had here (let alone get this gripped!). Whether or not the first volume was the typical case of an aspiring Jump artist rapidly providing set-up to avoid the axe or some divine revelation as a writer is up for debate, but I personally suspect creator Koyoharu Gotouge may’ve possessed this potency all along. We may’ve failed to shed tears over Tanjiro’s slain family, but that we’re this stunned at the death of a minor enemy is proof of Gotogue’s authenticity as an author.

Of course, there’s other going-ons: with this being only the second volume, there’s other characters to meet and world-building to digest. We don’t learn much about the surviving recruits for the Demon Slayer Corps, nor the mysterious maternal figure who receives word of their success, but striking personality traits provide clues; for instance, does the mohawk-sporting child’s outburst over katanas depict a go-getter who lives for the hunt, or imply a darkened past? Meanwhile, we get another Japanese lesson in Hyottoko masks, courtesy of blade forger Haganezuka – true to his mask, he has something of an eccentric demeanor, namely his random temper tantrum when Tanjiro’s color-changing blade gleams an undesired hue. Already, I look forward to seeing further appearances from him.

Needless to say, I wasn’t expecting a dapper demon. 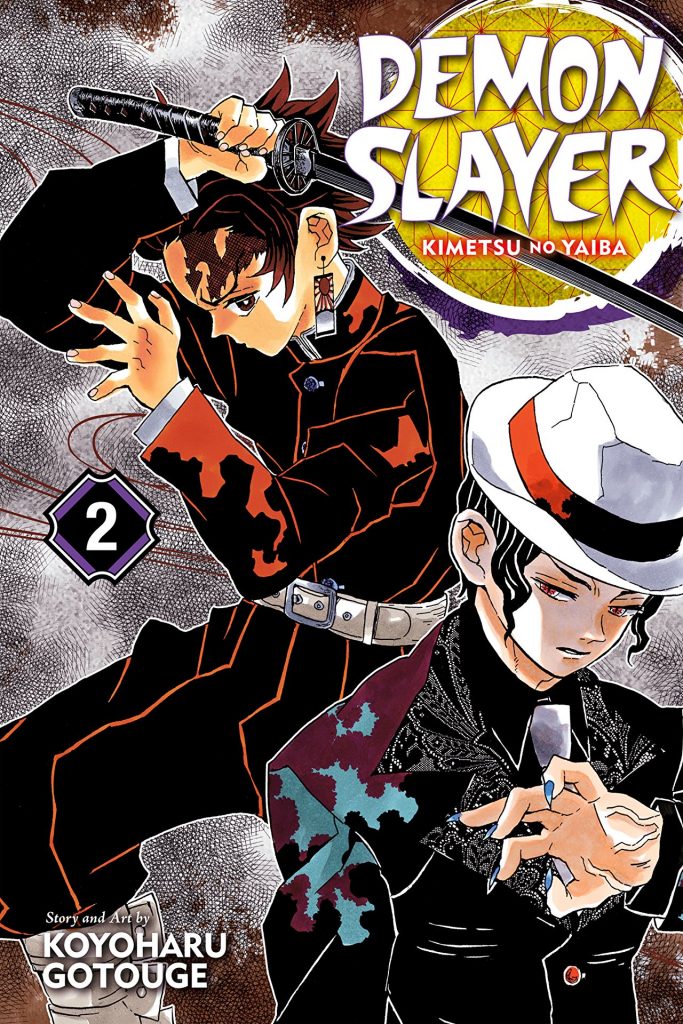 However, our biggest introduction is in Muzan Kibutsuji, the well-dressed demon depicted on the above cover. Presented as the main villain and the culprit behind Tanjiro’s slain family, his insurance in raising a human family has already caused Tanjiro no shortage of problems and will undoubtedly raise further headaches in the future; surely, his none-the-wiser wife and daughter would object to our protagonist randomly slaying their beloved? Regardless of whatever tragedy follows, Tanjiro finds some unexpected help: as it happens, not all demons agree with Kibutsuji’s murder sprees, and they, too, are searching for a cure. Could their hope lie in Tanjiro’s earnestness and drive to save those affected by the demon curse?

Like The Promised Neverland, Gotogue’s art remains unlike anything else in Shonen Jump, with this application of classic Japanese art complemented beautifully by the story’s bleak tone (and even then, somehow rare comedic moments like with Haganezuka hardly feel out of place). We’re also treated to Gotogue’s creativity for fight scenes: while there’s still some work needed in this area (it was only when reviewing the last couple pages I noticed one demon’s arms were chopped off with little fanfare), concepts like demons wielding temari balls or swimming through dimensional pockets keep us engaged. Thankfully, we learn Nezuko will hardly be a liability, as despite her incapacitated state, she’s able to tap into her demon senses to lend Tanjiro a helping hand. (Surely, despite her humanity being miraculously preserved, her abnormal strength won’t be used against her brother…right?)

We end on yet another battle cliffhanger, but just like before, it ends on relevancy — just as Tanjiro must slay the Hand Demon to both survive and pass the Demon Slayer Corps test, he must slay Kubutsuji’s goons for the sake of obtaining a cure. The difference here, somehow, is that actually we care this time: in moving beyond doe-eyed damsels-in-distress and cliché revenge stories, Kimetsu no Yaiba found the heart necessary to capture our attention. Any issues in pacing and action highlighting aside, Gotouge’s growth as an artist and a writer are already proving fruit, and I eagerly await the next volume. We may very well have a modern classic on our hands here.