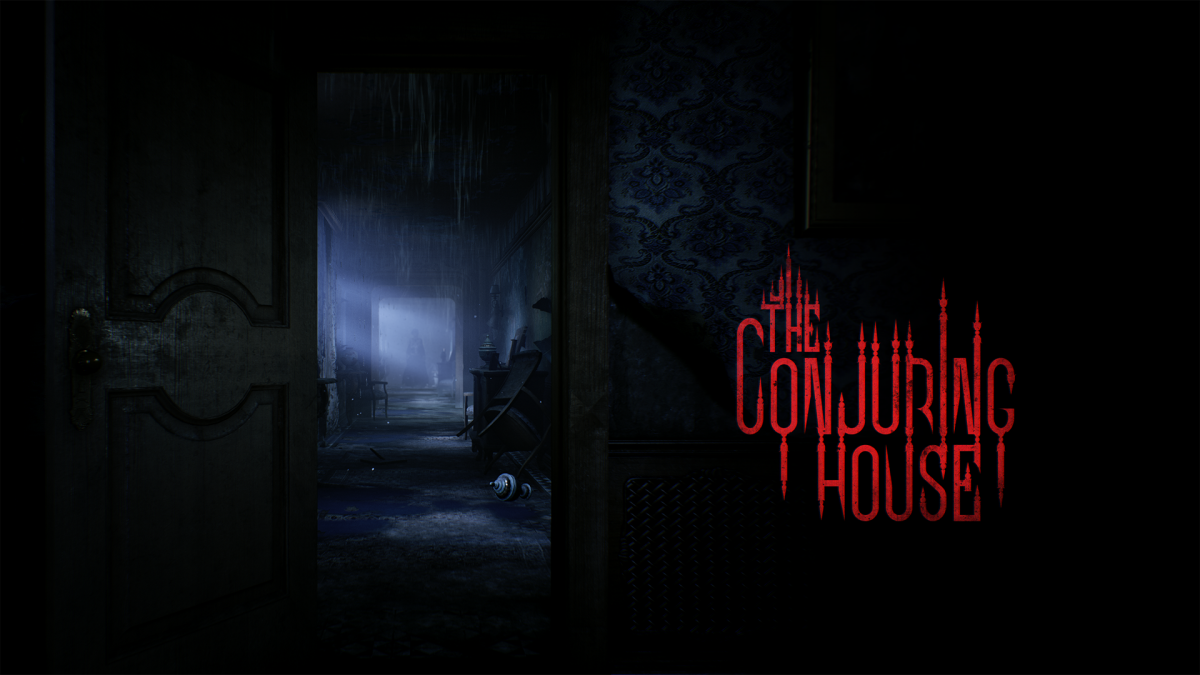 “The Conjuring House is like trying to find your car keys, glasses and remote control for hours while some asshole occasionally yells “boo!” in your ear” was what I complained to our Editor-in-Chief Francis DiPersio after he had tasked me with reviewing this game. “Typical Saturday night at the pub for me” he replied, good-humoredly. “Imagine it’s not at the pub, but you’re in a massive, damp, ruined old house, where every room looks the same” I retorted, emphasizing the pain I was experiencing. This was how I felt after playing it for the first time. Did The Conjuring House eventually reverse its initially dull opening hours to become an experience of captivating, mind-bending horror?

You know what? Since The Conjuring House doesn’t believe in building up suspense or leaving things to the imagination then I won’t either: This game sucks. With that out of the way, read on if you’d like to know why and how it sucks.

Did you hear about the ATKINSON house? That’s right, you have to shout it whenever you say it. 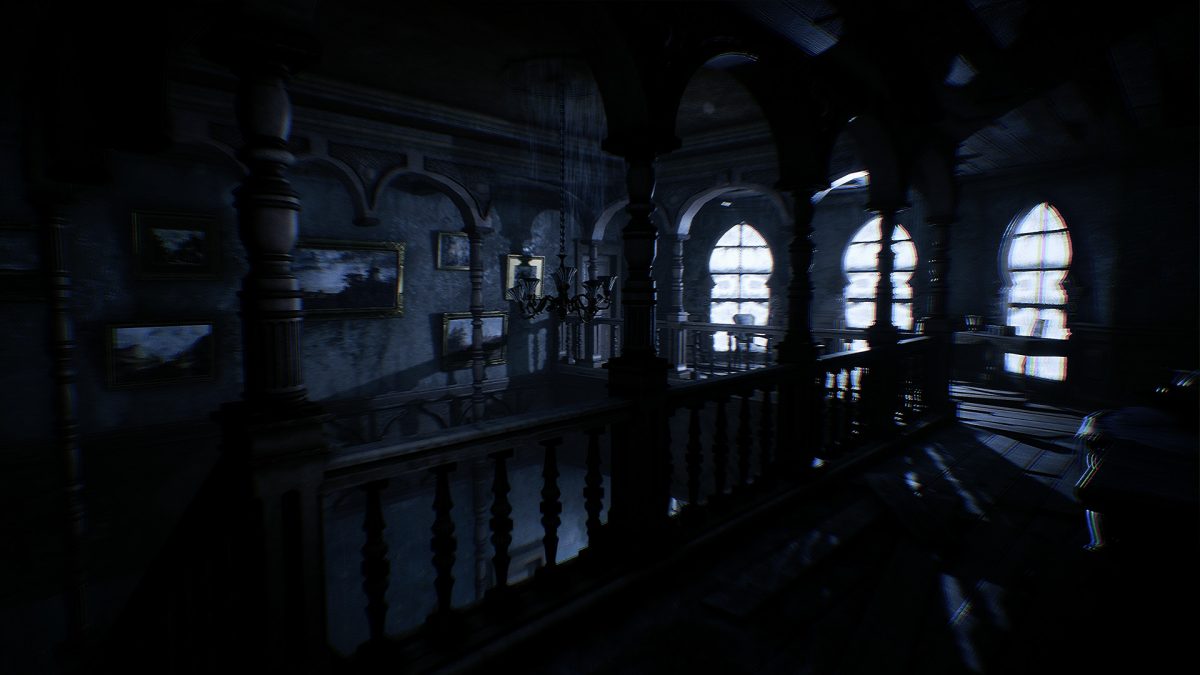 Second floor is just as dull as the first.

The story in Conjuring House is horrendously written with terrible pacing. Right from the opening cutscene, there’s horrendous voice acting. Even worse, these poor community theatre rejects have been forced to read dialogue which – as the subtitles reveal – isn’t even grammatically coherent, let alone possessing the subtlety and nuance a good horror game requires. It’s a standard trope: the ATKINSON house (which weirdly has to be entirely capitalized both in the subtitles and newspaper clippings) was the site of some cultish murders a hundred odd years ago and now has once again been the cause of the dissapearance of a group of interlopers.

And now, Conjuring House puts you into the shoes of a boring protagonist with a goofy voice who must wander through a mansion listlessly to attempt to find his friends! At least, we assume they’re his friends, because there’s very little in the way of backstory to be had. You’re soon informed via a diary that there’s a demon roaming the house, requiring a number of artifacts that must be collected to banish it. This was a major warning sign right here for me, as rather than letting the game’s world remain arcane and mysterious, you’re just immediately told the nature of the big bad and given a shopping list of things to get like it was some sort of 80’s RPG. 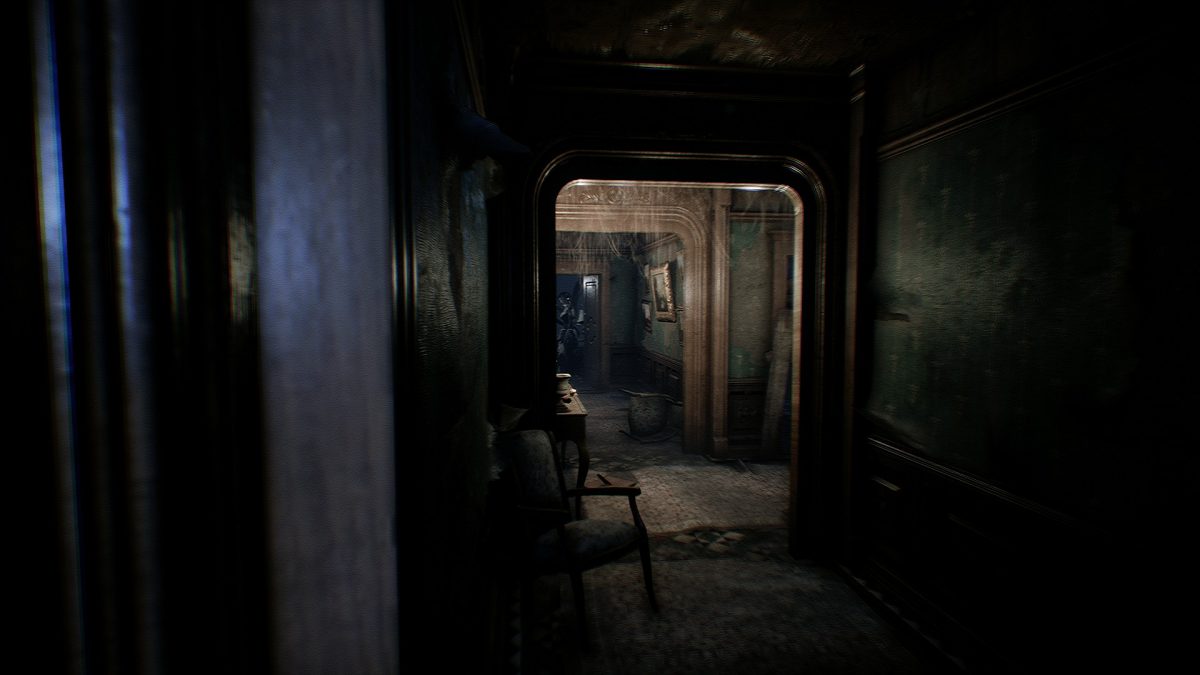 Snake-hair lady is scary the first couple times. Then her random spawning gets very frustrating and tiresome.

The most genuinely scary moments come early in the game where you’re teased by the creepy ambience: rattling chains, distant thunder; doors inexplicably opening and closing. There are also a few pre-scripted cutscenes, which usually means a scary face will pop out in front of your field of vision surprisingly. It’s like a highlight reel of noughties “Screamer” videos on Youtube (remember those?)

After that though, you soon get stuck into a gameplay loop of having your endless drawer-opening interrupted by a randomly spawning beastie, at which point you’re forced to run off to the nearest safe room (which hopefully you’ve memorized). Then you just listen to the protagonist’s panicked breathing for a bit till it’s safe to come out. The first few times, it’s scary but after a while it just gets incredibly frustrating as it just prolongs your already tedious searching even further.

Did I look behind the couch? I think I did. Oh well, better check again just in case. 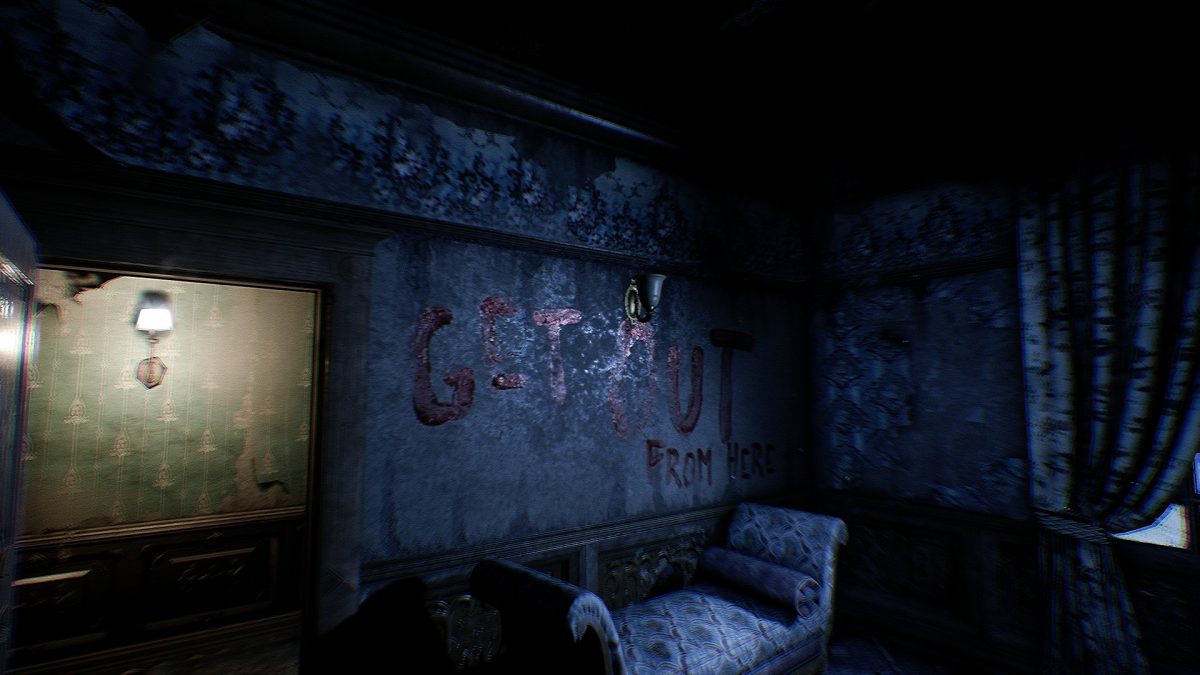 Interestingly, whoever scrawled this on the wall in blood realized they were running out of space writing in large lettering and had to add another smaller line. Very Relatable! Also |Get out from here” is good – albeit oddly worded advice – for anyone playing this game.

The worst part of Conjuring House is just how utterly aimless and unintuitive it is. In the Silent Hill series, the protagonist would helpfully bring a map of certain areas, using red pen to cross off locked doors or highlight important points to backtrack to. In the Amnesia games, you’d be pushed onward with little hints and notes to the right areas so your immersion in the horror wouldn’t be broken wondering too long about where to go next. Both series had this constant feeling of descending ever closer to the heart of darkness, to the depths of their protagonists’ dark pasts, existential angst or worst nightmares. You were helped without the invisible hand of the game designer ever showing itself too clearly.

Conjuring House has a blank for a protagonist, and you’re never given any sort of clue of where to go or what to do next. There’s no in-game map, and every grimy, grotty corridor looks much the same. Everywhere you go, you’ll find locked, jammed or stuck doors and boxes; padlocks and safes which need combinations to open. Right from the start you are overwhelmed by all the keys, codes and items you need to find before you’ve even got the faintest flavour of what your motivation is in all this, or why you should soldier on. There’s little to nothing in the way of puzzles, just looking behind couches and under desks in desperation to find something. And then when you finally do find something, it’s another another battery for your flashlight, which allows you to do even more fruitless searching through the dark and dismal surroundings (woohoo!) If I wanted to look around a damp old English house in the middle of the night for no real reason, I’d get out of my computer chair and think “Where did I put my fidget spinner again?”.

It’s still even a chore when you resort to reading the community guides. I’d genuinely rather do my taxes while listening to podcast on 18th century woodworking. At least then I’d just be bored rather than being bored in a oppressive atmosphere of filled with grimy greens and sludgey beige.

“GET OUT FROM HERE!”

Conjuring House is a boring, joyless scavenger hunt. The story is badly acted, atrociously written and instantly forgettable (especially as it’s told in tiny interludes between the endless scavenging). There’s not a single unique idea, concept or mechanic in it. Instead there’s a cobbled together pastiche of horror game cliches, which have been used with all the finesse of an infant scribbling crayon over an original Picasso. Though there are a few half decent jump scares to be had, the most scary part of this game was just the idea I would have to endure its dreary repetitious tedium a moment longer.