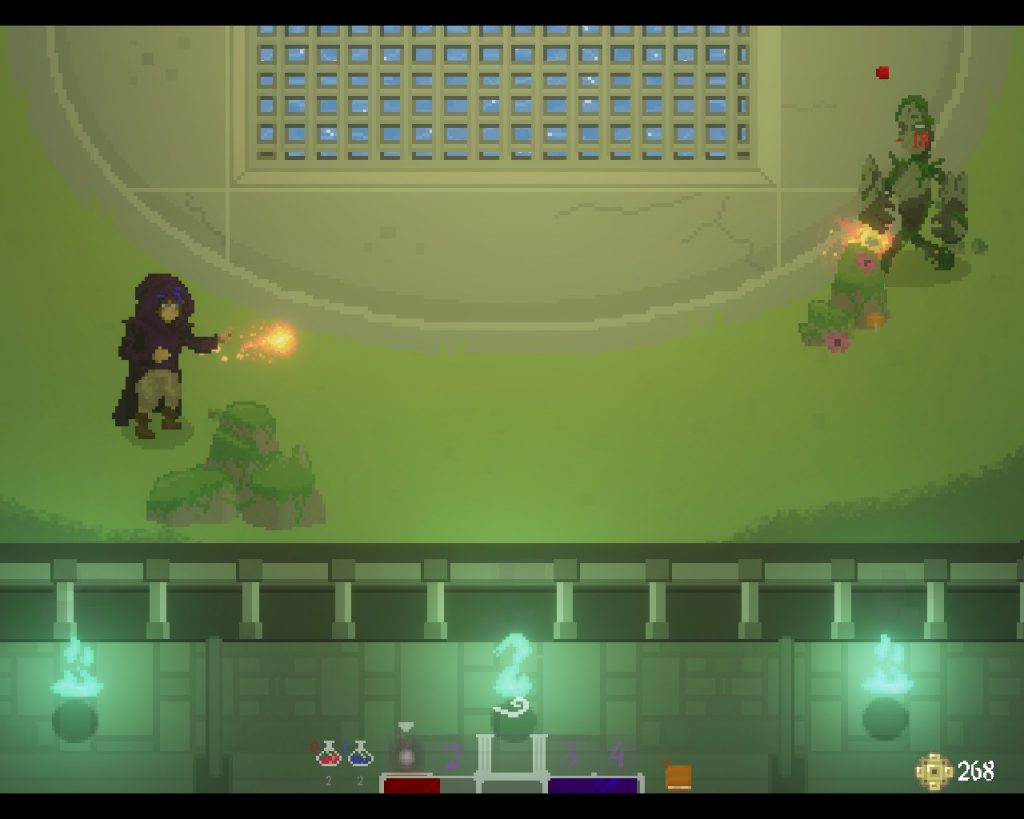 I’ll admit that gaming and I have been in a bit of a weird place lately. Without naming any specifics, I’ve started to feel like “fun” has been pushed aside to make room for flashy lights and shock value. Luckily, Gift of Parthax may have restored my relationship with my favourite hobby.

Gift of Parthax is a magic-themed, top-down arena title that tells the story of Araf, a purple hoody-loving wizard who was exiled then captured. He’s now forced to fight in a big arena, owned by his enemy Parthax, that spits enemies at you like it got too many for Christmas. You’re also fighting to save your friend Velenus who was also sentenced to fight for his life in the area. 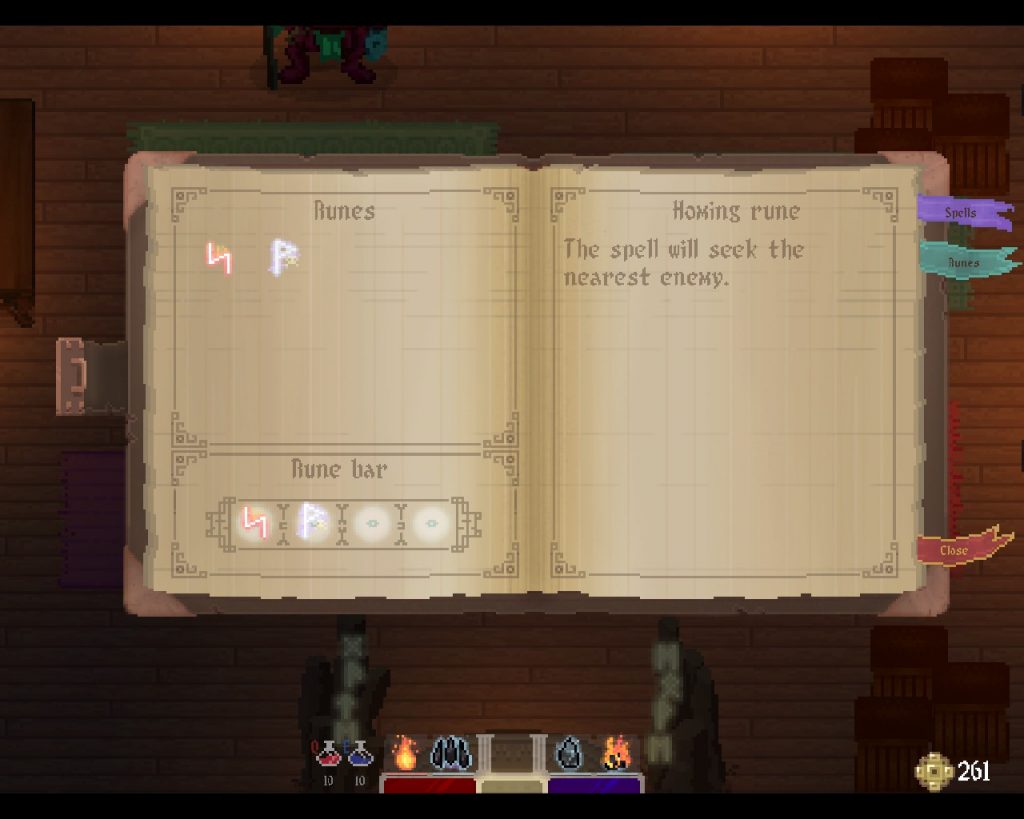 Before fighting in the arena, you can equip four different spells. Be sure to put your favourite in the first spot, as this is always the first spell selected when the fight begins – and you barely get a second to prepare before it does.

Along with your four spells, you can also equip runes (four runes per spell). Rather than the Harry Potter route where wizards learn all their magic in some sort of magic school, Arif needs to improve his powers by gaining “knowledge” from fighting in the arena, which contributes to improving your health, magic and fighting abilities. Runes, however, which are used to improve your spells, can be purchased from the arena shop. How do you get the money, you ask? You get money for every enemy you kill. Once an enemy runs out of HP they spit out gold coins as their corpse dissolves into nothing.

After each successful battle, you’ll find yourself magically transported into the shop to purchased new runes. Each of them has various degrees of usefulness that don’t necessarily correlate with how expensive the rune was. After you have picked out all your spells and runes, you can speak to the guard outside of the arena and choose your next battle.

Say what you like about the big evil, but they never actually force you to fight in the arena. If you prefer, Arif could just sit outside forever. They also reward you for doing well as I’ve already mentioned, so you are literally just fighting to help your friend. I really like this as it makes the story more interesting than just “good vs evil.” When we start, we don’t know Arif from Adam. For all we know Parthax is trying to stop the wizards who want to torture the civilians! 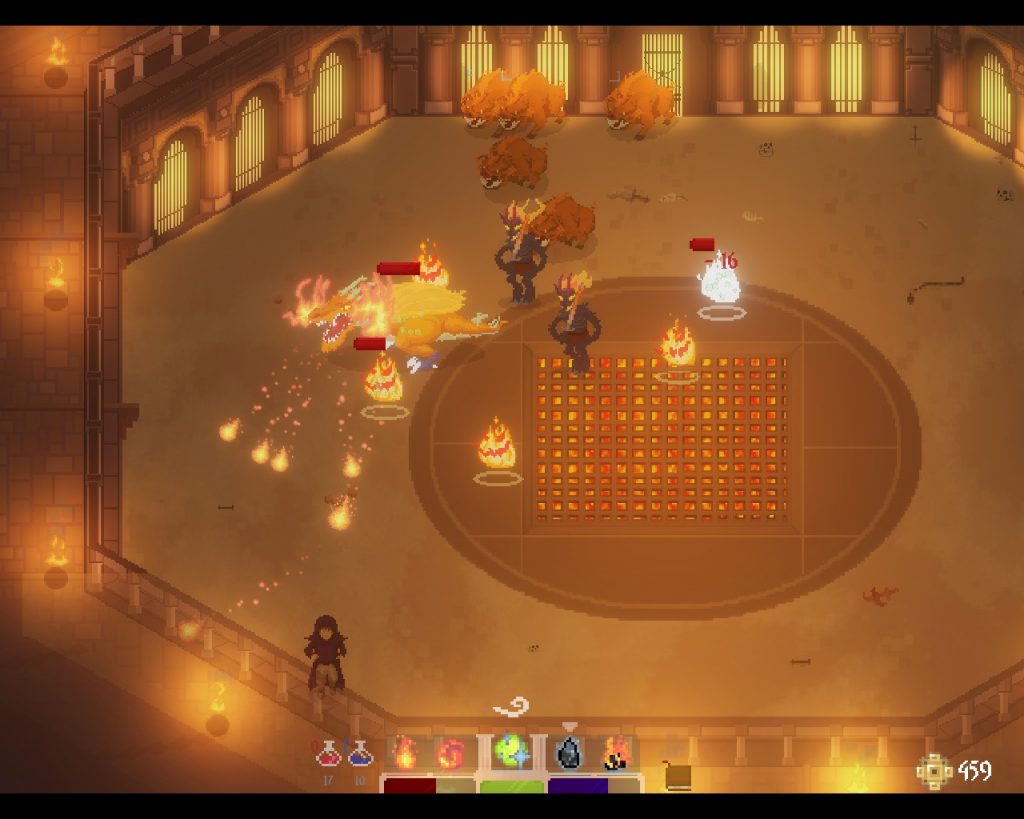 Every time you beat a challenge a new one opens up, much like it would in any other game. However, what I noticed in Gift of Parthax is that, rather than the enemies becoming stronger or more powerful with every level, there are just more of them! Which I suppose is a more accurate portrayal of arena battles. Parthax’s strategy seems to be: throw enemies at them as quickly as possible and hopefully one will succeed. Which seems to be working pretty well for him, honestly.

Barely a second into battle you’re spamming the arena with mouse clicks and trying desperately to avoid the dozens of enemies and projectiles coming at you. I recommend purchasing the “homing” rune before anything else, as before this aiming at enemies is pretty much impossible. Even after you get it, your spells won’t always go in the direction you want them to, nor will they focus on an enemy. Enemies move so quickly that sending a huge fiery, poisoned meteor into one side of the arena might prove useless in a matter of seconds.  And if you think “enhancing” your homing by equipping more than one homing rune will help… Well, you’re very optimistic. Like I was.

Frankly, every battle I was in just turned into me dodging enemies and running around the edge of the arena firing my favourite spells into the centre, whilst drip-feeding myself health potions. Which actually works quite well! Sure, the first few seconds of any battles were mayhem, but they were over very shortly. I found the whole experience rather therapeutic.

If there is some rune in the shop that you think would help you pass a level than fear not – you can just go back and do the earlier levels until you can afford it. 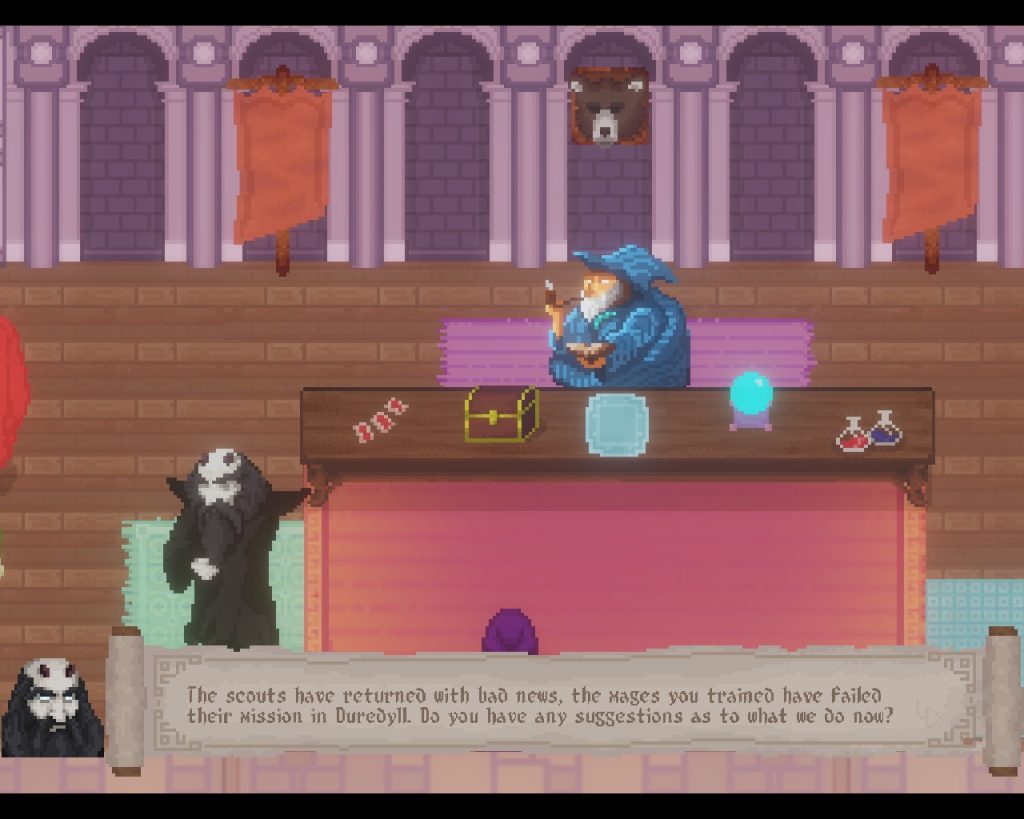 Probably the most interesting thing about Gift of Parthax is how it looks. It’s designed in this old-school pixel 8-bit style. I often roll my eyes at something like this as it can come across as some silly attempt at seeming “random.” But in this game, it really seems to work. Mostly because the fighting style in the game reminds me of fighting arena style arcade games. Even the biggest, scariest monsters look colourful and fun, much like anybody would if they became pixel people.

It also has this cute, adventure-themed background music that really keeps you in the moment!

There are small things in the game that make it ridiculously charming. Okay, so naming all the levels after the seasons and theming them as such isn’t the most creative idea ever – but fighting Ents and Dragons is cool!

That’s what I like most about this game. It’s not trying too hard or trying to be too much. It’s just a sweet, fun charming adventure where you get to throw flaming rocks at dragons. And at the end of the day, that’s all I want out of life.

A Battle for Everyone 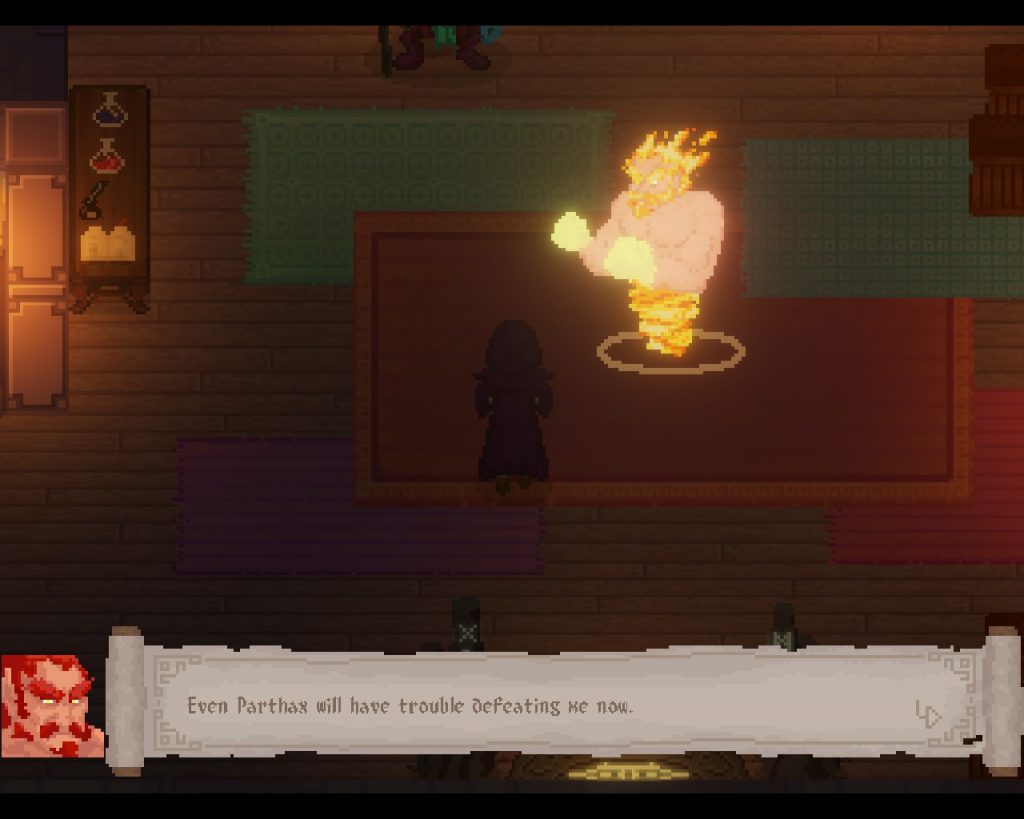 The combat in Gift of Parthax is repetitive, which brings it down since it’s such a big part of the game. But since you can tailor pretty much all of your spells, the player has the power to make things different. Mind you, changing spells during a battle can be a very frustrating experience since you’ve not given much time to think! One wrong button can lead to Arif’s doom!

There are also plenty of achievements, some for very trivial things, like using a certain amount of health potions or dying a certain amount of times. I know it’s a small point- one would think I’ve grown out of the need to get a gold star for every small triumph – but again, it shows that the creators wanted to have fun with their audience.

Gift of Parthax feels like a game that anyone can enjoy. It’s charming, it’s cute and, above all else, it’s just a lot of fun.

BattleSouls Fights for Relevance   BattleSouls is one of the simplest introductions to arena combat I’ve ever come across. Three short slides of explanation and you’re able to jump…