A Triumphant Return to the Frontline 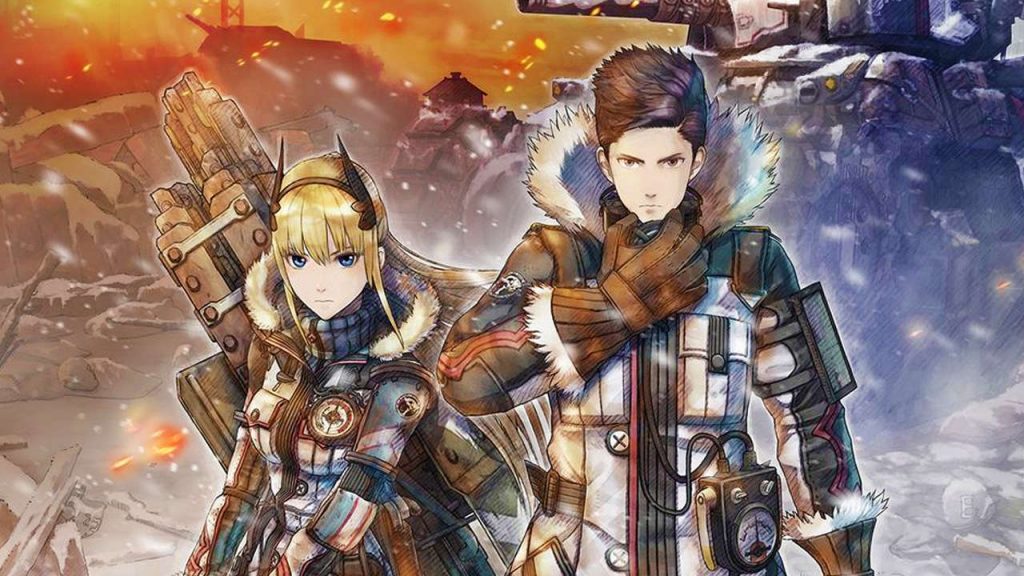 It’s been over a decade since Valkyria Chronicles first stormed the PlayStation 3, pulling SRPG gamers into the conflict between the scrappy Atlantic Federation and the Imperial Alliance. Since then, we in the West have been largely left wanting more. The series saw a pair of PSP sequels in Japan, along with an HD port of the original game and a spin-off (read our review here) title that traded the franchise’s signature strategic combat for something more action-oriented that sadly left fans wanting more.

Thankfully, those who’ve been waiting patiently for a true Valkyria Chronicles sequel on the big screen are about to be rewarded. Valkyria Chronicles 4 delivers everything the most discerning rebel fighter could ask for; the battles are bigger and more involved; there are more unit types to master, and the combat has received a few welcome tweaks to offer players even more exciting tactical options.

Simply put: the Valkyria Chronicles you know and love is back. And this time around it’s better than ever. 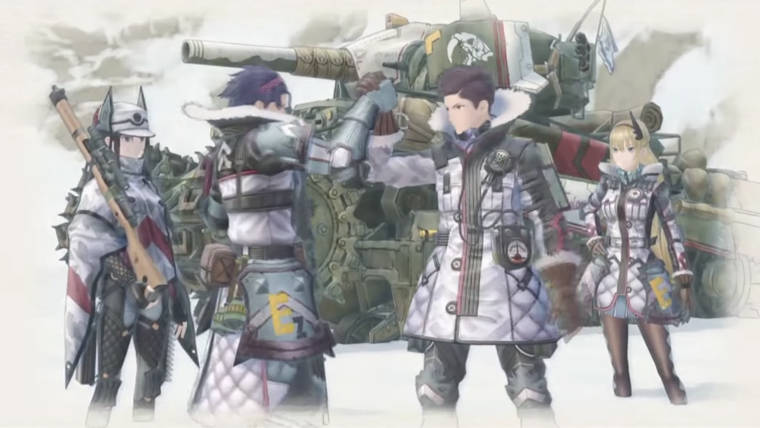 The gang’s all here.

Valkyria Chronicles 4‘s story unfolds during the second Europan War and coincides with the events of the first game. As such, you can expect to hear plenty of references to operations that took place in the original game over the course of its campaign. Which is nice, as it helps make you feel like your fight is part of a much bigger effort to topple the empire. This time around, the narrative revolves around Claude Wallace, a young commander of the Atlantic Federation’s Ranger Corps Squad E. The game begins with Claude and his scrappy group of childhood friends-turned-soldiers being tasked with storming the heart of the invading Eastern empire in Operation Northern Cross.

Of course, much like the 2008 original, there’s a lot more happening beneath the surface. It’s a coming of age story that touches on the horrors of war in a way many games fail to. And frankly, it’s all the better for it. However, veteran resistance fighters may be surprised to discover a bit more fanservice peppered throughout the experience this time around. From ass-grabbing to upskirts and a rather uncomfortable conversation about the way a commanding officer returned your ally’s fleshy centerfold in “used condition,” moments like this feel a bit unnecessary and feel shoehorned into an otherwise gripping narrative about war and sacrifice.

Still, it’s easy to overlook these awkward moments in the grand scheme of things. Despite a few cheap gags, Valkyria Chronicles 4’s storytelling shines where it counts and is filled with powerful moments that will leave you rushing for the Kleenex. 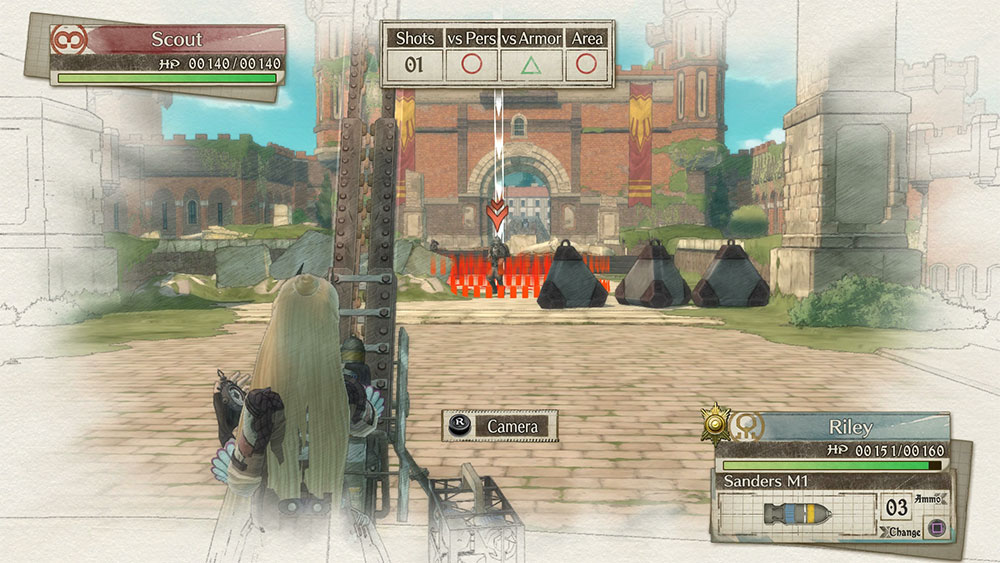 Grenadiers can turn entire squads of imps into twitching gristle.

In the game’s opening hours, Valkyria Chronicles 4 plays virtually identically to the previous games in the series. However, it doesn’t take long before it introduces a number of new mechanics, along with some returning ones from the PSP-only sequels. For starters, the new grenadier class is an absolute blast to command. These troops carry portable mortar emplacements and can rain down devastating fire from great distances. They can make short work of hard-to-reach imperial gun emplacements and snipers. And before long they get the ability to damage enemy tanks and even stop them in their tracks by depleting their available action points.

Another interesting new feature is the Last Stand system. When an ally is gunned down, they’re given the option to either inspire your team or go down in a blaze of glory with a final volley of shots. This is a really cool feature. Watching your wounded comrade stand back up and mow down an enemy base’s sole defender with the last round in their clip before collapsing in defeat is nothing short of exhilarating and never gets old.

One of my favorite mechanics in Valkyria Chronicles 4 has to be the addition of armored personnel carriers. First introduced in Valkyria Chronicles 2 on the PSP, these armored vehicles may not pack the firepower that a tank does, but they can be used to transport troops across the battlefield. This is a huge help when pillboxes or new environmental hazards like flames get in the way. Being able to swoop in and rescue pinned-down comrades and ferry them to safety through an obstacle the enemy is unable to overcome feels awesome.

I loved the way new features are added in a steady drip. It really keeps the combat exciting by offering new mechanics to master.

A Conflict Destined for the History Books 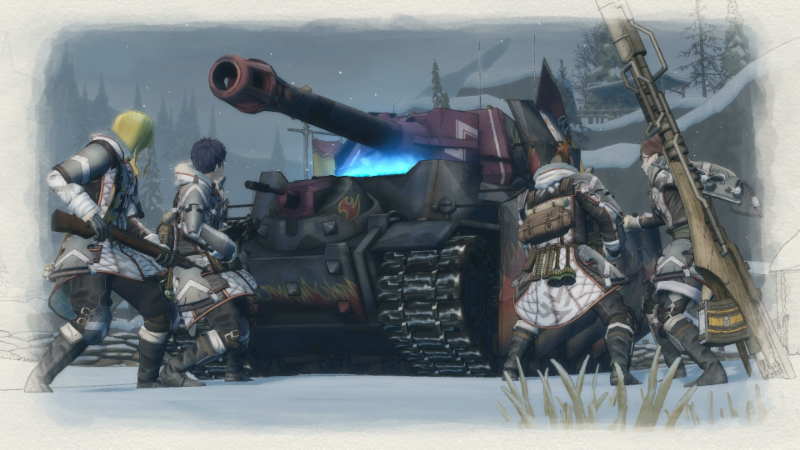 Like the previous games in the series, the story is told through an interactive war journal. Here, you’ll be able to access story missions, cutscenes, mission briefings, a glossary, optional battles, and more. Sure, you can just charge through the main campaign. But you’d be missing out if you did. Valkyria Chronicles 4 is filled with optional skirmishes and side stories. Skirmishes are ideal for racking up the experience to level up your squad, buy new gear, and learn new battlefield commands. Side stories, on the other hand, offer a closer look at the personal stories of your main squadmates. And, as you’d expect, these are written with as much care as the rest of the narrative.

Grinding isn’t absolutely necessary though. I found that with proper planning, no fights felt particularly unfair so long as you use your head and equip the right unit types. Still, with how satisfying the combat is, being able to dive into a new fight to beef up your grunts is never a chore if you need to do so.

All told, there’s a mountain of these missions to work through, and they do a great job of fleshing out the experience. That being said, you might want to clear your calendar if you hope to see everything Valkyria Chronicles 4 has to offer. 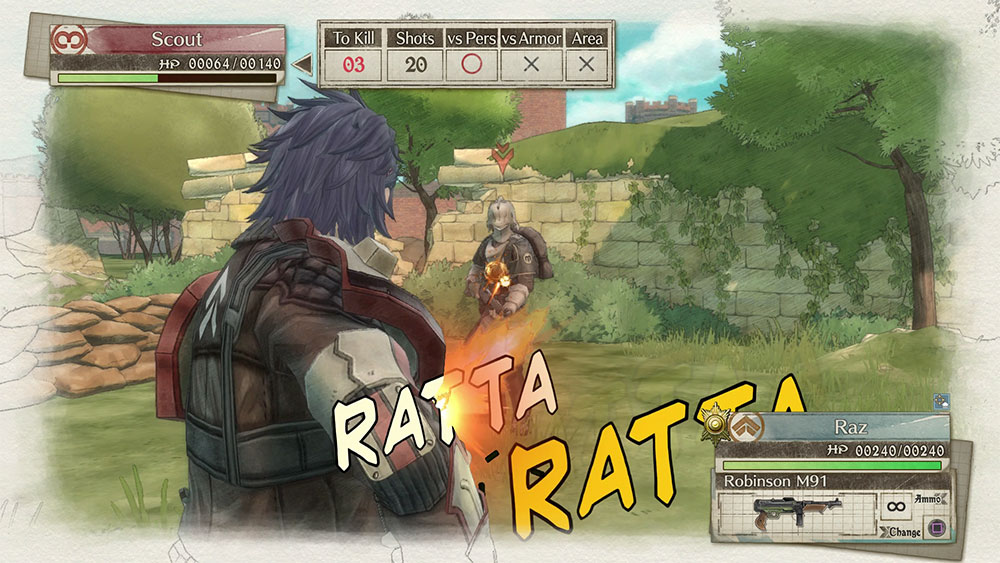 Valkyria Chronicles 4‘s watercolor art style is just as distinctive as ever thanks to Sega’s proprietary “CANVAS” engine. However, it looks even better this time around. This is largely thanks to a much greater variety of locales to explore. The seasons change over the course of the game’s campaign, with each providing a welcome facelift to the environments. One battle may have you in a grassy grove lined with foliage. The next may have your squad marching through a snowy tundra or smoke-filled village engulfed in a raging inferno.

All of this variety goes a long way towards bringing the game’s world to life, making each leg of the campaign stand out from the last one.

That’s not to say the game is a graphical powerhouse. The engine’s PS3 roots are plain to see, especially in the game’s visual novel-style cutscenes, which sport some awkward animations and some pretty weak explosion effects that lack impact. But these are minor gripes. Valkyria Chronicles 4‘s visuals pack plenty of charm, and the superb character designs are really appealing.

The game also sports some fantastic musical arrangements. There’s a great selection of battle marches and epic symphonies of destruction that really pull you into each cinematic or gripping firefight. Though I do feel some themes may repeat a bit too often over the course of the campaign.

Valkyria Chronicles 4 is a welcome return to form for Sega’s beloved SRPG series. Not only does it revisit its roots, it nurtures them with new and exciting mechanics to make the formula flourish like never before. By expanding upon and refining the elements that made the franchise so great to begin with, the studio has managed to make me fall in love all over again. If you’ve been waiting for the series to make a triumphant return, then at ease, soldier. This is one fight worth enlisting in. 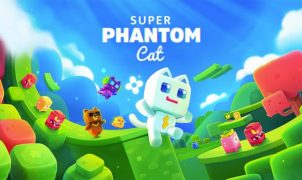 This platform game may just cat-ch your fancy. Knocking Mario and Sonic off their lofty perches as kings of platform games is no easy feat. This is especially true…