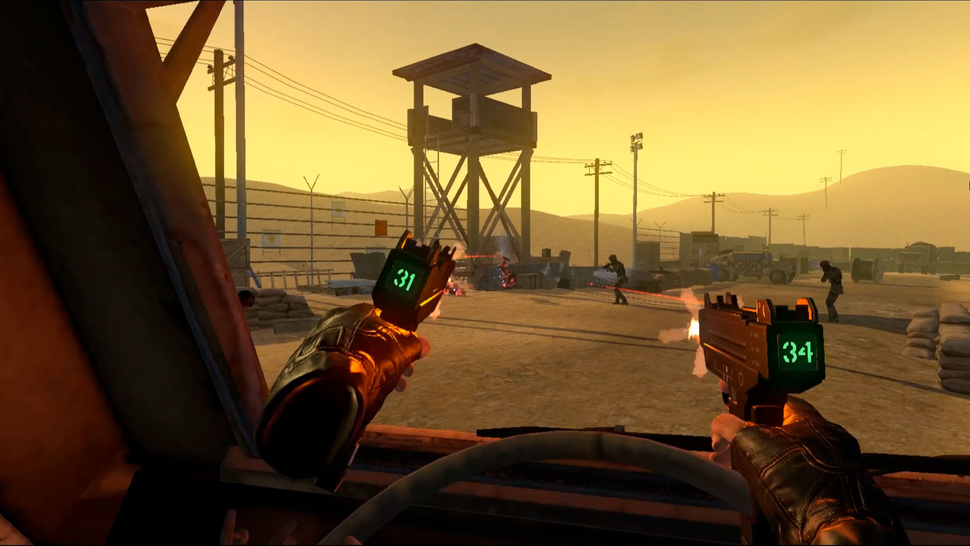 One of my earliest gaming memories is of sitting, Zapper light gun in hand, in front of a tiny black and white TV as I gleefully mowed down waves of grunts in Operation Wolf on the NES. Taito’s horizontally-scrolling shooter was all the rage when it released in 1987. And why wouldn’t it be? We’re talking about the decade that spawned John-Freaking-Rambo. There wasn’t a kid alive back then that could resist the urge to slip on a bandoleer, grab the biggest gun they could find and take the fight to some commie scum. That said, when I first came across Operation Warcade, Ivanovich Games’ spiritual successor to that long forgotten series of arcade-style shooters, I was more than a little bit excited to pop off a few rounds in defense of the good ol’ U.S. of A.

With the right team behind it, Operation Warcade could have had the potential to be a surefire hit. After all, the idea of blasting APCs, gunboats, and heavily-armed commandos to bits sounds like the perfect summer blockbuster for the PSVR.  Unfortunately, while it manages to capture much of the look and feel of the games that inspired it, shoddy production values, rampant glitches, and repetitive stage designs will have you scrambling to get a deferment from this torturous tour of duty. 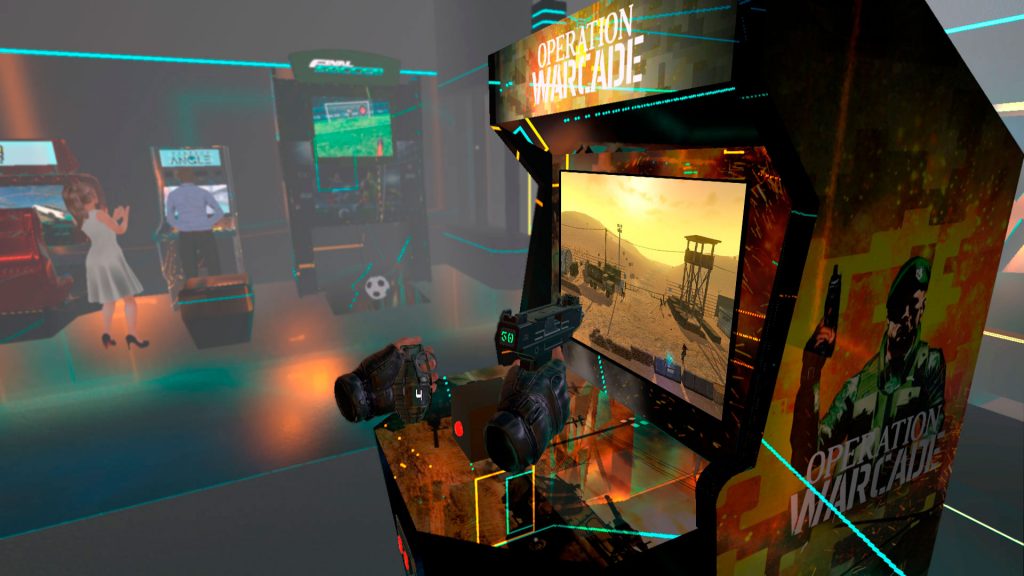 Fittingly enough, the game begins by plopping you in the middle of an arcade, allowing you to admire a pretty snazzy looking arcade Operation Warcade cabinet. I have to admit, grabbing the virtual Uzi mounted to the cabinet’s control panel and tilting it around to aim at the screen was a cool feeling. If you’re anything like me and happened to cut your teeth on the arcade shooters of the 80’s, I imagine you’d probably be pretty hard-pressed not to feel a similar ping of nostalgia here, too.

After starting the game up, you’re able to choose between three different controller options. The DualShock controller option allows you to tilt your controller to aim at the screen. It sounds cumbersome, but it actually works pretty well. You can flick the right stick to rotate your field of view, while the left trigger and right trigger lob grenades and fire your Uzi respectively. The Move controller option allows you to use both arms independently, with your left hand chucking grenades while your right hand once again wields your submachine gun. It’s probably the most comfortable setup of the three, and I have to admit chucking grenades with your left arms feels pretty badass at times. Lastly, the third control option makes use of the PlayStation Aim controller, which swaps your Uzi and grenade combo for an assault rifle with under-barrel grenade launcher. 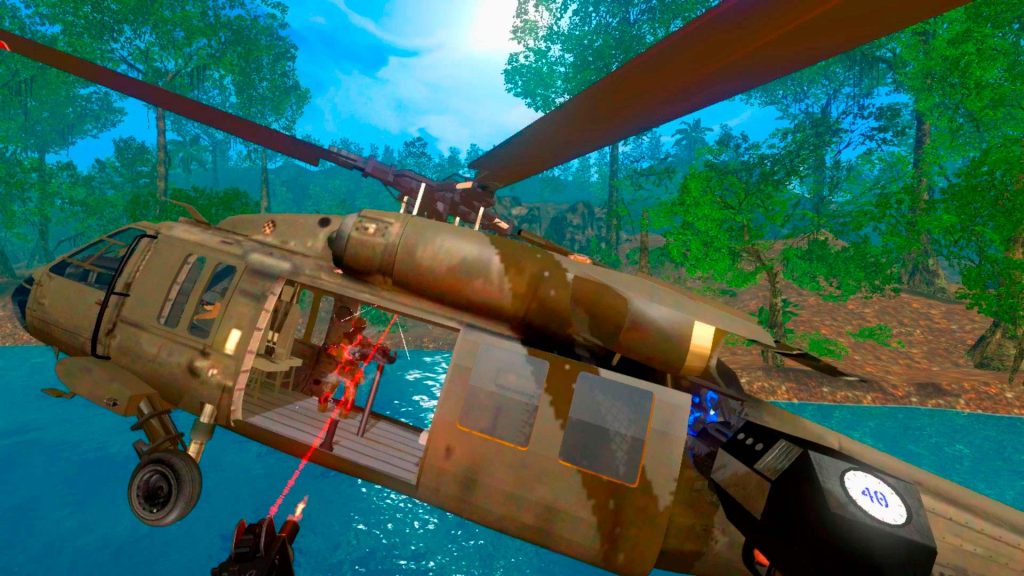 Welcome to the jungle, we’ve got war games.

After you choose your desired control scheme, you’ll be able to dive into the action. Operation Warcade boasts 108 missions featuring 36 levels. However, in essence, this description comes across as a bit misleading. There are only six different locations to choose from, each featuring six missions. The path for each of these missions remains the same, with the only real changes coming in the form of the three objectives you’ll need to complete in order to collect medals, which can then be used to upgrade your weapons or unlock new levels. These objectives range from rescuing POWs by shooting the locks off their cages, destroying a certain number of a particular enemy type, or performing trick kills like using your Half-Life 2-inspired gravity gun to lob an explosive barrel at an enemy chopper.

Like I said before, Operation Wolf is quite obviously the inspiration for Operation Warcade. In fact, the game’s first two stages, a desert POW camp riverside jungle firefight, closely mirror those of Taito’s arcade classic. Other stages include a cityscape, tropical village, and even a battle on the high seas. The action typically scrolls horizontally from the left to right. However, you’ll often come across “immersion points” which, when shot, teleport you onto the battlefield for a more visceral experience.

These immersion points often spice things up by giving you access to new weapons. These include shotguns (single or akimbo), throwing knives, sniper rifles, rocket launchers, and more. Additionally, they also occasionally put you behind the wheel of vehicles like trucks, which can be used to run down enemies, and fighter planes, which can rain down hell from above. 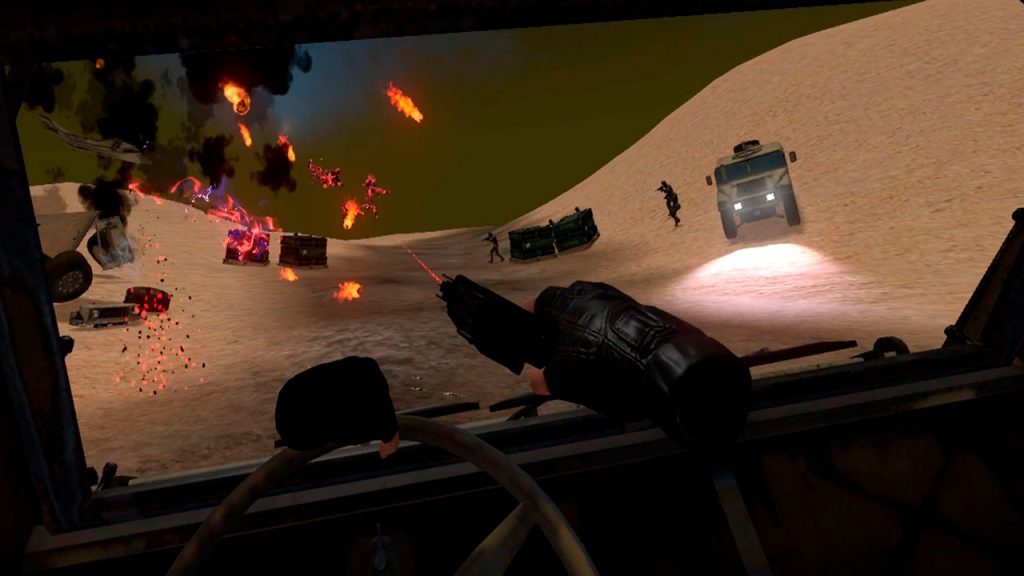 Immersion Mode puts players behind the sights and steering wheels of a number of different weapons and vehicles.

In theory, these moments should be the highlight of Operation Warcade‘s experience. The problem is they’re often riddled with bugs that can really drain the fun from the experience. In one stage, I had multiple instances where the enemies I was meant to kill simply never spawned, forcing me to exit the mission and ruin a perfectly good run. Another time, I had a building randomly fall on me the moment I spawned, completely obscuring my view of the oncoming enemies.

Moments like this are bad enough. But what’s even worse is the game’s inconsistent score-keeping that can completely prevent you from accomplishing objectives. One mission tasked me with running over a half dozen enemy troops with a truck. I nearly doubled this quota on numerous occasions, but not once did the game register their grisly deaths beneath my truck’s massive wheels. Strangely enough, another stage required me to leave every POW alive. Thankfully, Operation Warcade seldom plays by its own rules, because I mistakenly killed several of them and was still awarded my shiny medal.

This is quite possibly the first time a video game has left me with stolen valor issues. It’s a real mess.

As nagging as these problems are, they pale in comparison to one particular recurring glitch that plagued my time with Operation Warcade. There were countless instances when using the PlayStation Aim controller that my gun would simply disappear when centering my view. Button inputs, such as the home button, would still work. However, I couldn’t use the controller to access any of the game’s functions or menus. This left me having to manually close the application and start again from wherever I left off.

Considering the game is built around the idea of running amok with a machine gun, it’s pretty disheartening. How is it that the PSVR’s best light gun alternative is so prone to breaking the game entirely?

War Sure is Ugly 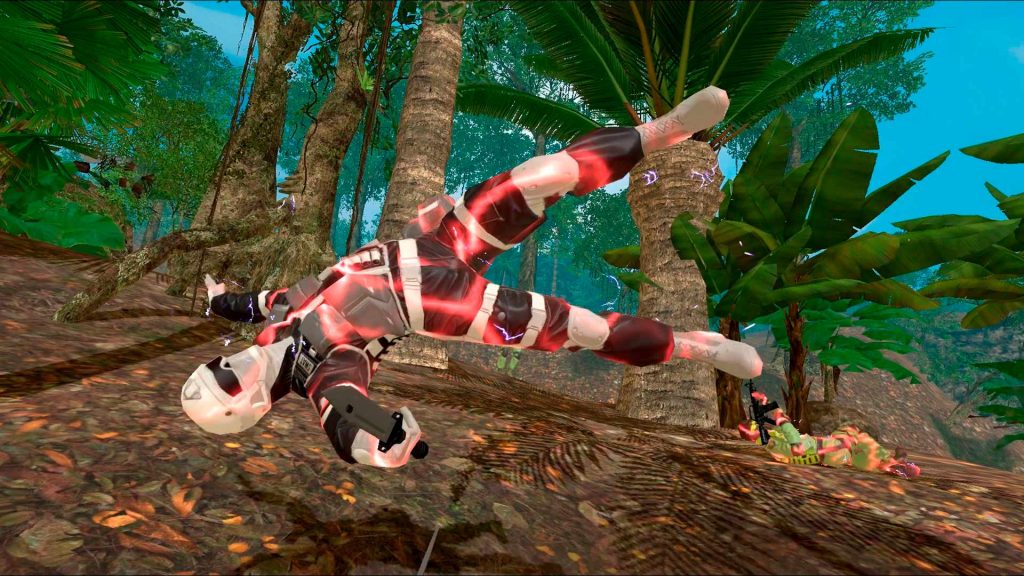 Operation Warcade’s visuals look like a relic from the late 1990s.

In terms of presentation, Operation Warcade leaves much to be desired. The game’s character models are horrendous and look like relics from several generations past (see the picture above). To make matters worse, the stages feature some of the muddiest textures I’ve seen on the PSVR. Seriously, just wait until you get a look at the facades of the buildings in the city level. It’s enough to make you spit up your zesty stroganoff MRE. Explosions pack all of the force of a wet firecracker, too. This makes moments that would otherwise be satisfying feel largely unfulfilling.

Here’s an example: Imagine the most explosive scene from your favorite Schwarzenegger flick. Okay, you with me? Now, imagine all of that glorious firepower being replaced with knockoff Super Soakers. You know, the ones with the leaky valves that packed all the water pressure of your first apartment’s shower? That’s pretty much what it feels like to get behind the trigger of Operation Warcade.

Graphics aren’t everything, of course. But in the case of Operation Warcade, the muddy visuals and tiny character models make for a frustrating combination. It’s often nearly impossible to see enemies from afar, which can result in plenty of cheap hits.

Then again, the game does provide you with unlimited credits. That said, this is only an issue when you need to beat a stage without dying to earn a medal. But it’s still annoying nonetheless. This lack of polish makes some areas (the city rooftops especially) look borderline unfinished. Suffice it to say, that’s not a great look for a $30 product.

War! What is it Good For?

I really wanted to like Operation Warcade. Sure, VR is absolutely flooded with light gun shooters. But the game’s promise of old-school arcade action in the spirit of Operation Wolf and Operation Thunderbolt was something I couldn’t resist. And I have to admit, on a very basic level, Operation Warcade managed to scratch my itchy trigger finger. With more polish, I really think it could have been an enjoyable way to spend a few afternoons. Instead, it feels a lot like traipsing through minefield littered with game-breaking glitches just waiting to spoil the fun.

Operation Warcade‘s glaring technical issues, coupled with some seriously shoddy production values, make for a shooter that’s hard to recommend to all but the least discerning couch commandos.

Full disclosure: This review is based on a PSVR retail copy of Operation Warcade given to Hey Poor Player by the publisher.