The Trinkets and Kinship of Shenmue

“Maybe I Should Get Another” 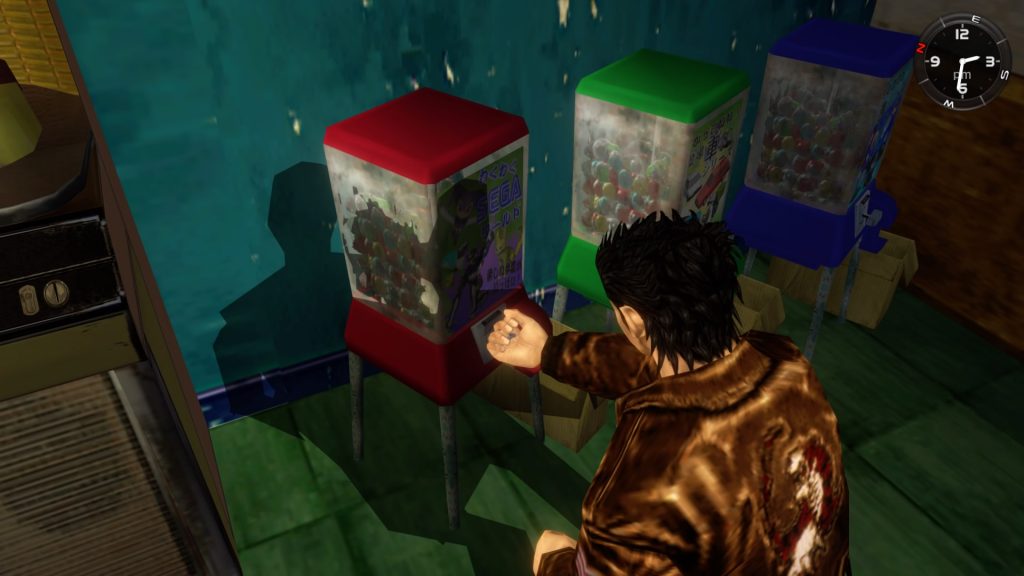 I have always had a thing for little trinkets. Back when I had to work in an office, my desk accommodated a Lego character here, a Marvel miniature there, an overall undeniable youthful spirit everywhere. My desk at home is a similar fixture, except now it consists of upgrades such as a Super Mario Maker mascot or Amiibo.

My history of such trinkets is a long-standing one. Fond memories of my first trip alone to the local newsagent remain strong, for it was all about the mystery toy/candy machines outside. I never knew at the time that 10/20p would bring so much joy.

25 years later, taking my 6-year-old daughter to a toy store is living proof that that youthful spirit and inclination has clearly passed down from father to child. She will happily glance past the Barbie’s and Pokemon’s that she equally adores without so much as a tentative purchase request. Well, sometimes. But once we hit the collectibles section, often located near the exit, she starts pointing excitedly like something out of a Looney Tunes cartoon. I can empathise. These days I’m more physically reserved, but nevertheless other family members still sometimes bear the brunt of our over-enthusiasm for inanimate plastic, often bringing us both away from retailer ecstasy. But not without a trinket or two of course. 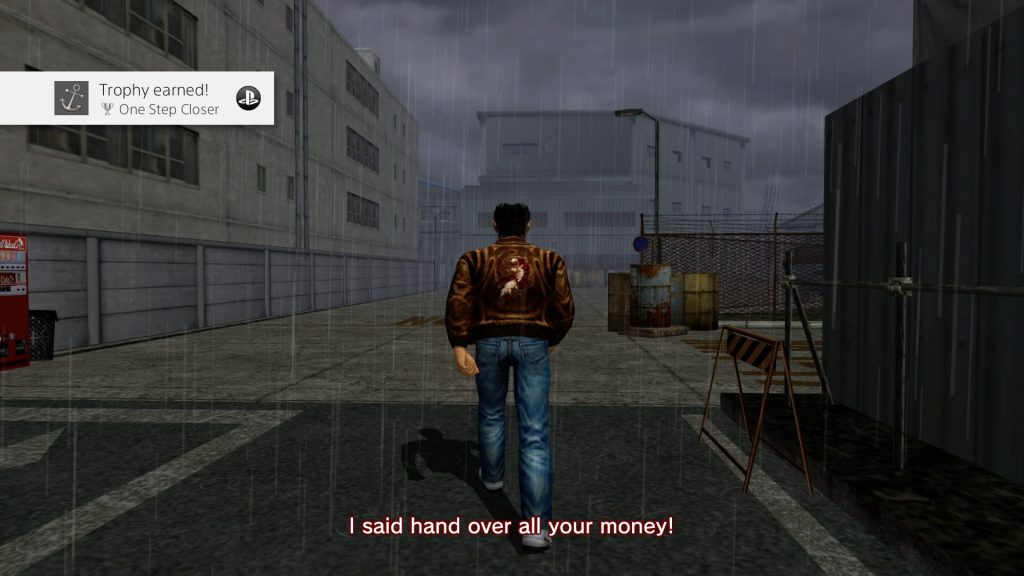 The capsule machines at the harbour deploy a different tactic

Once I ran across the pair of trinket-dispensing machines outside the Sakuragoaka village store, one of the primary locations in Sega’s recently remastered adventure Shenmue, it was a calling like no other. A sentimental moment within a sentimental moment, if you will. Once that passed, the excitement I’d passed down in my genes surfaced. “Do they work?” I was asked both enthusiastically and hopefully. Usually, in such circumstances, that question would not apply. Very few video games allow for such miniature interaction. It was to my delight, and that of my daughter, that the answer was most definitely, “Yes”.

And so a query of mere functionality quickly ascended/descended into capsule toy addiction. The 100 Yen – 70p – price tag seems insignificant, especially as Ryo begins the game with 10,000. Forlorn housekeeper Ine-San leaving 500 yen allowance each day only facilitates the habit further. But as Ryo says as he collects it: “I should be grateful”. This father/daughter collection connection certainly is.

The toy collection comes in the form of Sega characters – the casts of Sonic, Virtua Fighter and Nights into Dreams among others – that didn’t even exist 32 years ago. Given the alternative mix of dice, rubber balls and paperweights just wouldn’t cut it, this was always an unforgivable oversight.

The Urge to Spend is Super Effective 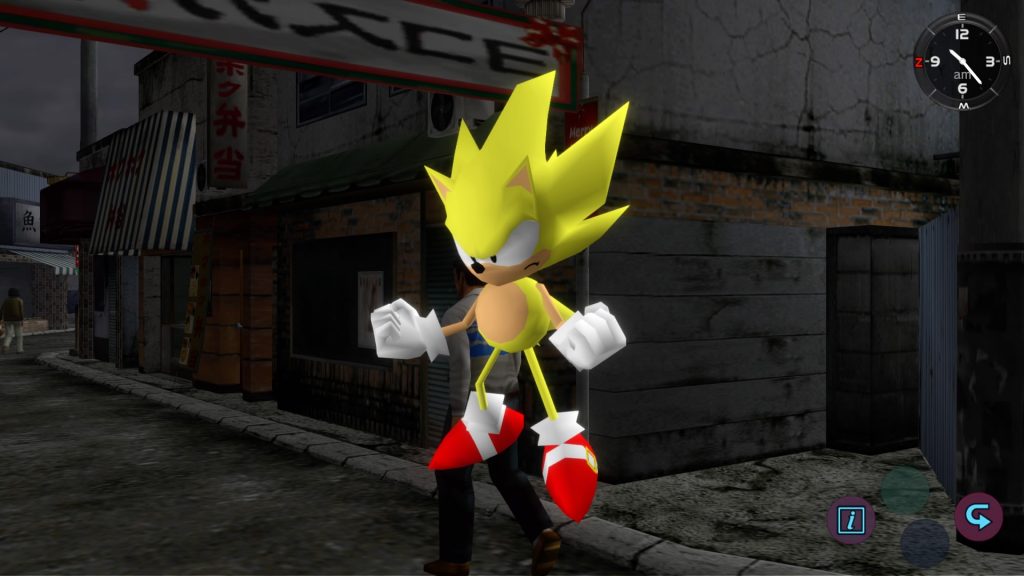 You barely get toys this good in real life

Toy capsule collecting has become a major part of this revisit to Yokosuka, but now is presented in a new light. As I direct Ryo to each machine, I let my daughter decide how many turns I take on each. It might be 5 turns on the Sonic toys, the next day just the 3, and so on for the other machines. It became a game within itself. As Ryo’s remaining cash flow is displayed with each purchase, no white lies are going to get me out of it.

After each capsule toy machine routine comes to an end, it’s time to inspect the goods. After all, “How are we going to know how many are left to get, daddy?” As if any more incentive was required to complete the capsule toy collection Shenmue has to offer, the recent PS4/Xbox One remaster also rewards collectors with trophies/achievements for their efforts. It brings a near 20 year old game’s unique experience to a new generation of players.

Ryo Grabbing Life By The Balls Once Again 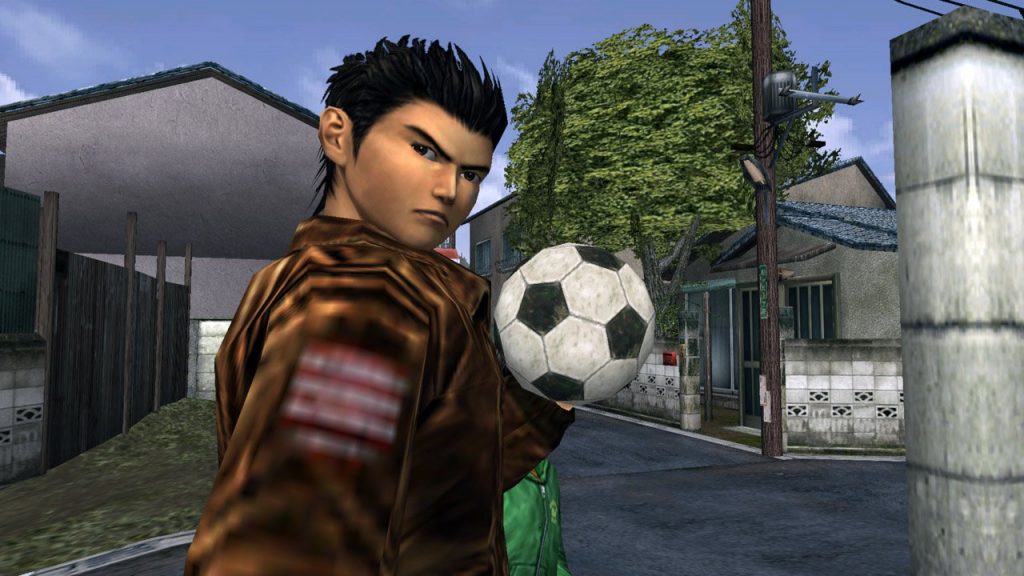 Shenmue is the ultimate example of a small world examined. The 4 years of development and alleged $50-80 million spent shows in its unquestionable detail. Real life locations such as the interconnecting street of Dobuita are prominent throughout – and much of it still parallels many ways in 2018 to the 1986 Yu Suzuki representation. The use of meteorological records to generate the weather cycles of December 1986 Yokosuka produces a plentiful mixture of clement, heavy rain, even snow. All are triggers of excitement from my daughter, from decorations on display at Christmas, to impromptu shouts of “you need to get in the arcade, it’s raining so time to play some games”. Who am I to disappoint?

Yu Suzuki’s classics Hang-On and Space Harrier were still relatively new back in 1986. As a child of the 80’s, fond memories remain of the Hang-On theme ringing in the air at many a seaside arcades well into the 90’s. But the life-size, distinctive motorcycle cabinet is now an arcade antique, rarely seen on today’s arcade scene. The concept of such a cabinet within a video game, let alone in real life, blew my daughter’s mind. She is of that age where she is in complete admiration for her parents’ childhood past’s, more specifically pastimes. We both love to read. I collect toys, she collects toys. I play video games and so does she, but more specifically the ones attributed to my past. 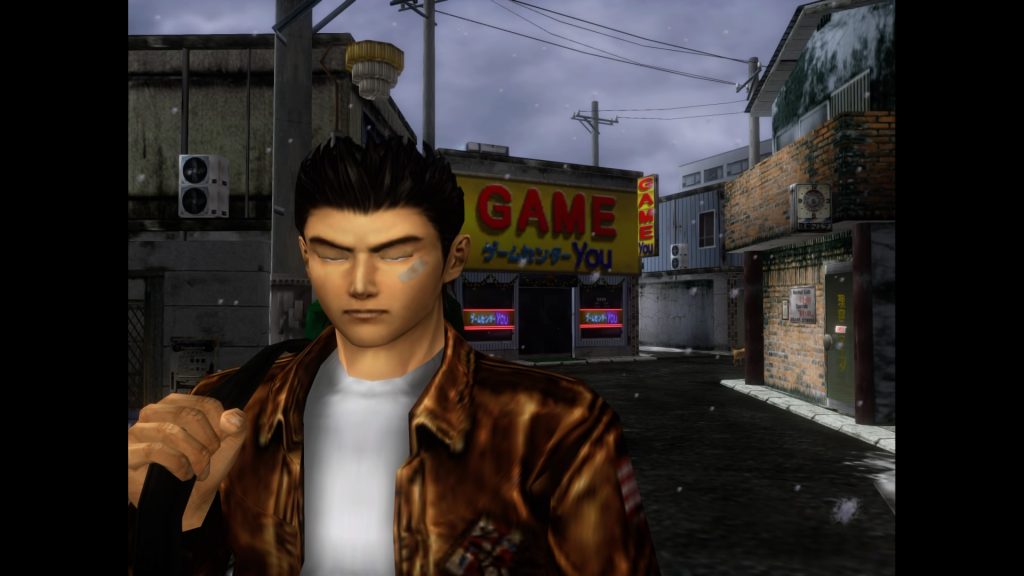 We understand Ryo, we really do

As the story has developed over time my daughter’s attention lies away from searching for sailors, gangs and Chinese translators. Thankfully I have enough cash to catch the bus to work at the harbour each day. But not a day in the game passes without prompts of “Have you fed the kitten today?” or “Have you spoken to Nozomi?”, or even “Is Tom still dancing in the street?” It’s a testament to Shenmue’s cast of characters and their day to day actions. They may be mostly insignificant but hardly inconspicuous at the same time.

The world of Shenmue is currently pressing on towards its next chapter in our household. My PSN trophy cabinet is filling up after many revisited gaming memories. But the real trophies will always be the trinkets themselves, and the youthfulness they have invoked. I am eagerly awaiting to start Shenmue II, when the parent/daughter trinket collecting team can begin again.