Destination Primus Vita: For Our Water! 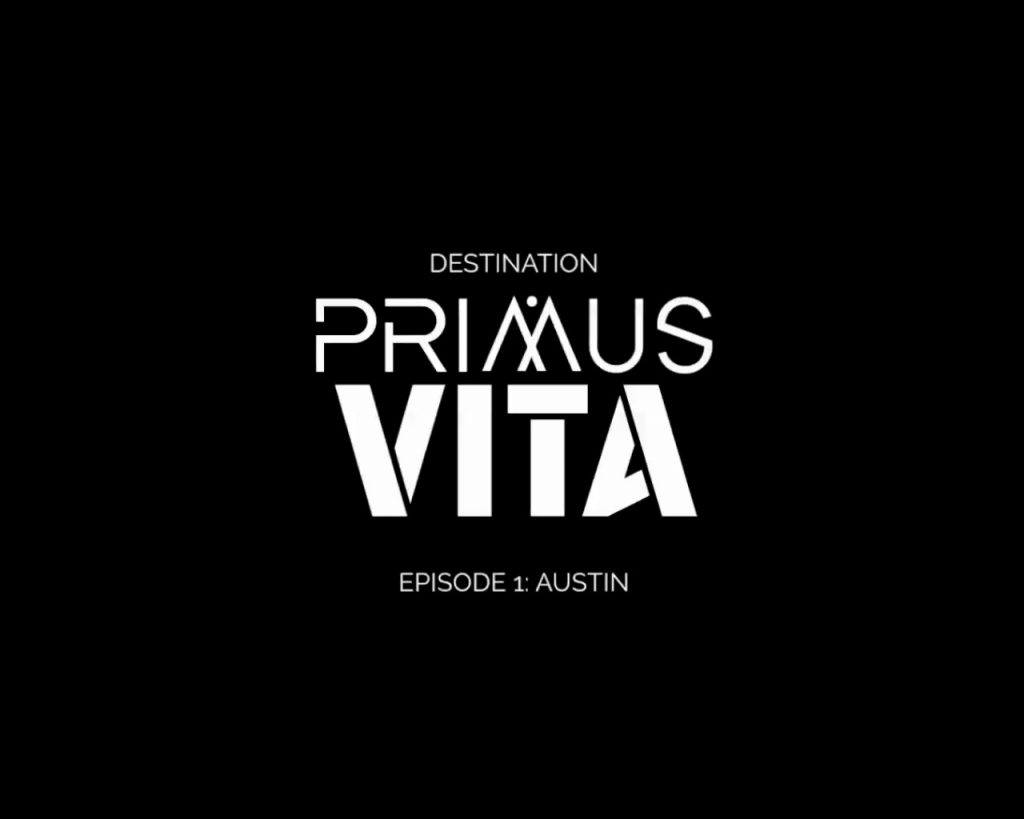 I like to think of myself as a games critic who isn’t hard to please. All I ask for from a game is an original concept, an interesting story, and fun. But I can honestly say, after playing the first chapter of Destination Primus Vita, that I have literally no idea if I’ve experienced any of these.

Destination Primus Vita is a science fiction adventure set, like most science fiction adventures, in the distant future. As per usual, our home planet Earth has been ruined, this time by alien robots who stole our water. (I’m actually really interested in this since our planet is mostly water! I want to know what state the planet was actually in before this happened i.e. how much of the oceans had we already destroyed and how melted were the polar ice caps.) So now we must go to get it back!

A crew of six people, each with their own special skills has joined together for the mission. The six characters are in hyper-sleep, waiting to arrive at their destination. Each episode is one person’s experience of this. Episode one shows us the story of “scientist” Austin Blair-Moreno. She’ll have to navigate through a simulation to test her abilities, guided by “NIM” the computer’s AI, as well as dealing with her angsty issues with her little brother. 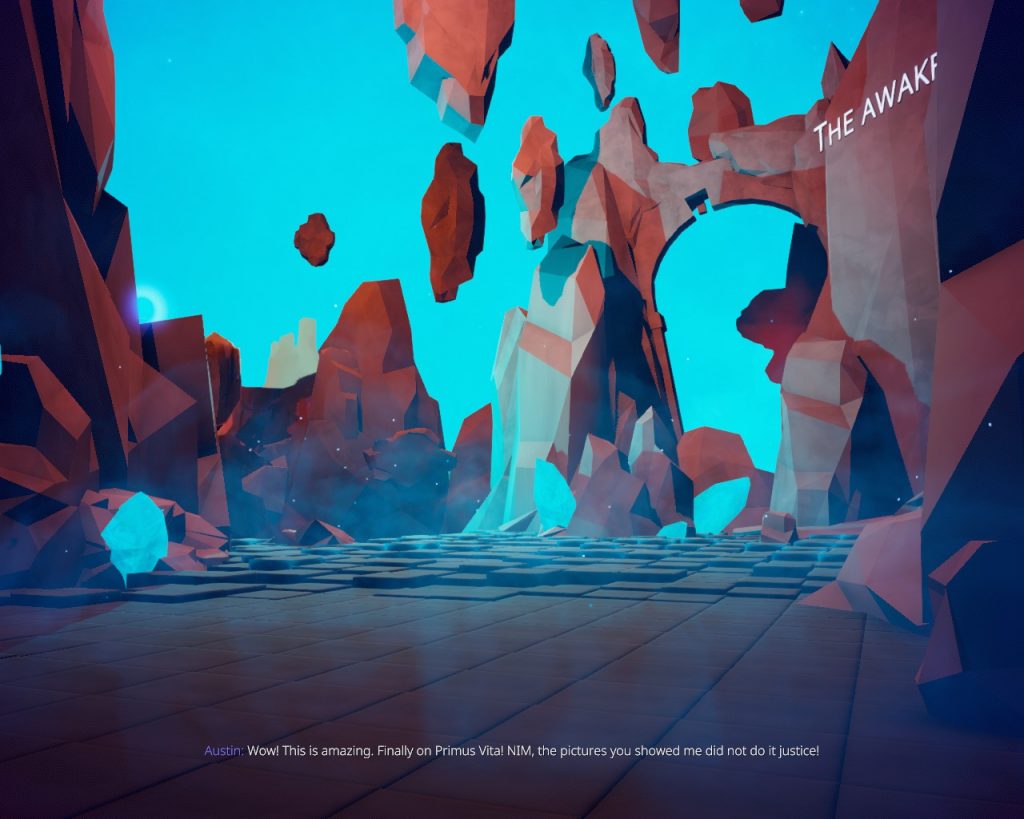 Probably what I like most about Destination Primus Vita is that it just looks gorgeous. The details in the space wreckage and the bizarre way the world moulds around you really draw you into this adventure. As humans, we like pretty colours, and Epsilon Games appreciates that. Even the lockers on the spacecraft were made to look realistic and intriguing. Which is a good thing as, in this game, you’re going to have to look at literally everything if you want to pass the level!

When loading up Destination Primus Vista I was under the impression that this was a puzzle game. Well, turns out the game is maybe twenty percent puzzles, eighty percent running around and looking for stuff and corny emotional stories.

Before you begin a puzzle, you have to look for the clues to help you- which could be literally everywhere. On the first door puzzle I went up and down the stairs twice looking for the second clue- only to find it was right by the door! True, the visuals were interesting, making exploring at least fun and the music sucks you in- but that did get us off to a bitter start.

I say there were maybe two or three puzzles per level. Now, these are good puzzles. They require you to think logically and remember what you’ve been told. Some are too easy but hey, it’s episode one. But is it too much to ask for a puzzle game to be mostly puzzles? Especially since, in order to interact with stuff, you need to stand in the exact right spot, meaning searching can take longer than it needs to. 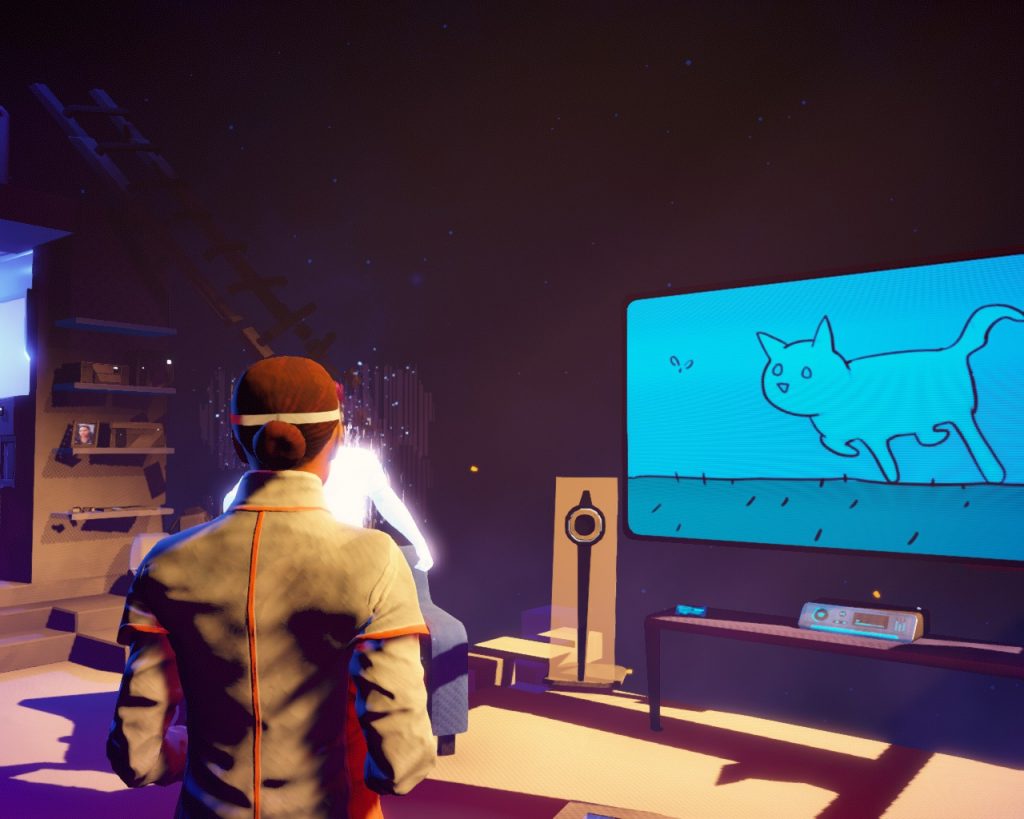 As well as going through puzzles to test her abilities, Austin also has to go deep into her memories and analyse her relationships with each of her crew members. For reasons. (Like, literally I don’t know why the computer is making her do this. NIM says it helps but I’m not sure how.)

I don’t really mind the game trying to include these relationships. It’s good that it’s trying to give each character reason for being here and I like that it’s trying to make us care about these characters. I just couldn’t help but laugh a little when I went from solving puzzles to help save the Earth to arguing to my brother because I didn’t go to his party.

But honestly, my biggest issue with the conversations is the way the people look. Remember me saying how much I enjoyed the detail and how beautiful the game looked? That same can’t be said for the people. Their faces look good enough, but each character only has one expression. They wear it if they’re angry, hurt or talking about the meaning of life. Their lips don’t even move in time to what they are saying! It’s just kind of disappointing that in a game with such well-designed graphics with so much effort put into them, everyone’s faces look so bland and indifferent. I also don’t understand the relationship points.

If you talk to a character you’ll be given two options, one will improve your relationship and the other will damage it. But since all characters are in their own hypersleep, they don’t know what you said! How can you make someone not like you in your own mind? Artemis has no idea that she and Austin have agreed to meet at her place in the future instead of bars. 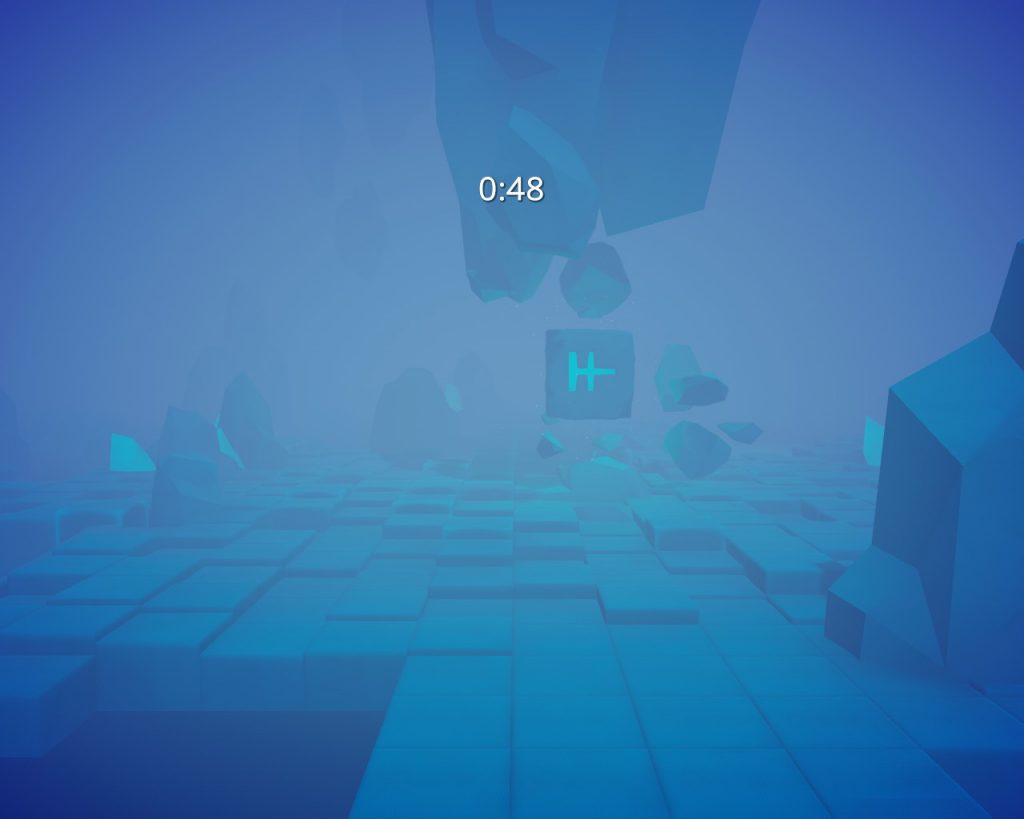 My main recommendation for Destination Primus Vita is that you should play it on a console or if you get the PC version, play it with a controller. Trouble is- the game didn’t tell me this!

I often do resent developers who design games for PC then tell you that you need a controller. If you’re going to design a game for PC you should keep in mind the controls that PCs are meant to have. Even if a controller is easier. I’m not saying don’t design it for a controller, just make it possible without one. But Destination Primus Vita didn’t even tell me that I needed a controller. But you do.

Point of view in the game is controlled by the mouse and not once did it smoothly go into the direction I wanted it to. This was annoying at most times, but when I got to the labyrinth levels when you have to run really mast through a maze, turning in the correct direction (if you go the wrong way once a giant robot will come and smash you), I got very, very angry! Every time I turned even slightly the Austin decided to turn a full 360 degrees and take me in the completely opposite direction! And of course, the moment I stepped on the wrong path the robots came to get me.

Funnily enough, I solved their not so cryptic turn signals the first time I played, but because the PC controls were so bad, making it past the level seemed impossible. (Why was I on a timer anyway?) The controls handle fine during the puzzles so it’s a shame that the game trips over here. I imagine the console experience might be a better one.

The Future of Primus Vita 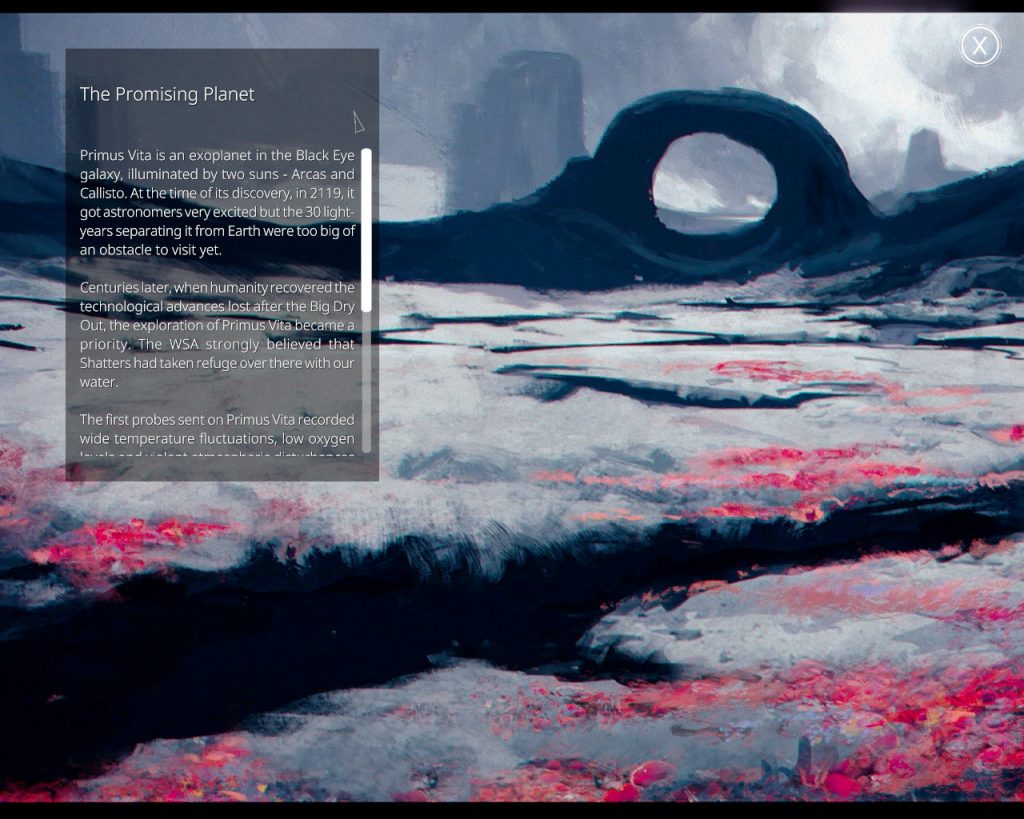 My sympathies for Destination Primus Vita is that this was episode one of a six-part game. The first episode is bound to have some issues or some problems that will be worked out later.

To my ears, the story did feel a little generic. Sort of very typical science-fiction. But then again, it’s a science-fiction game! There is a crew, in space, and they have to save the world. Austin as a character also feels a little generic. She’s a scientist lady, fascinated by the world and her studies but represses her emotions and takes others for granted. I’m sure when she gets to Primus Vita she’ll save the world and learn to let people in!

I only wish that I wanted to play more of the game for its puzzles.

Destination Primus Vita needs to decide what it wants to be. As I said before- the puzzles are good, but it didn’t feel like I was here to do puzzles. I was here to wander around a ship and listen to everyone’s stories. It was more like a visual novel on a spaceship. The ending is supposed to be this big emotional awakening- but I didn’t have to solve any puzzles to get it.  Going forward, the creators should decide which type of game they want it to be. 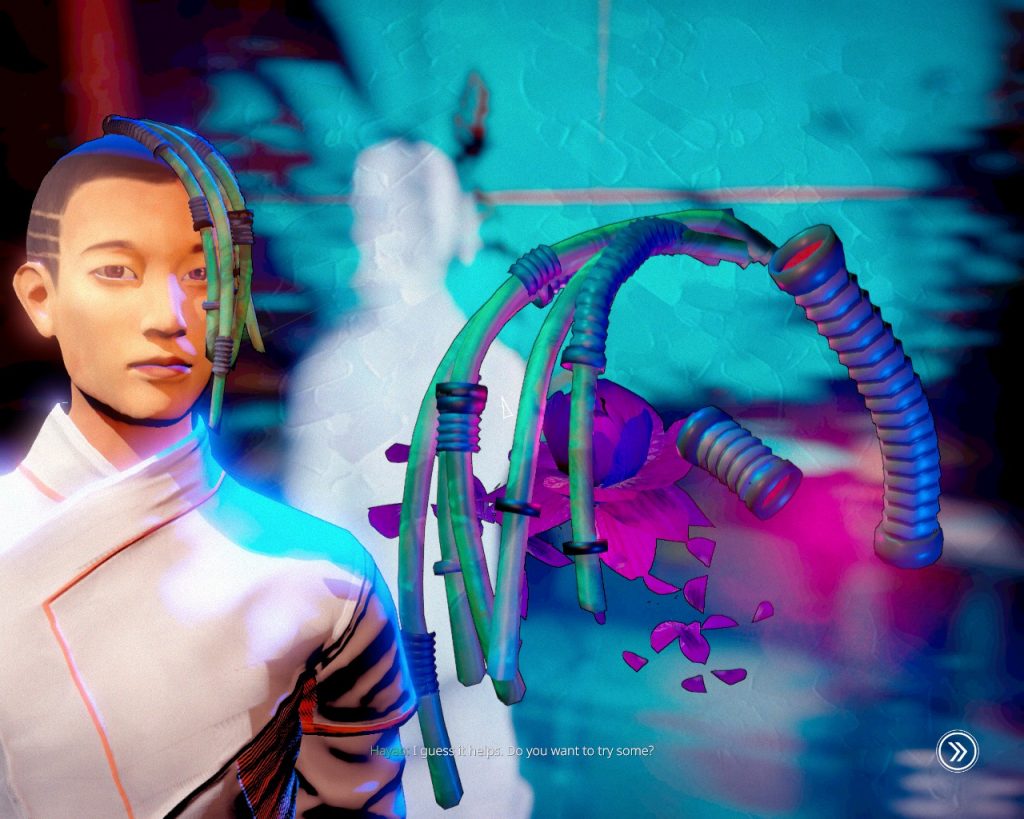 At this point, I don’t know if I do recommend the game. Visually, Destination Primus Vita is stunning. The voice acting is great, and the soundtrack is really immersive. But the gameplay has some areas it can improve on.

I think what saves it, is that it isn’t very expensive. You’ll get a few hours of entertainment out of episode one, which is pretty good for eight bucks. If you’re interested afterward, maybe consider getting the next one. Part of me does want to play the next one. I feel that Hayao, Artemis, and Geny might be more interesting characters than Austin.

But if you’re interested in the game because it’s a puzzle game, you’re probably going to be disappointed. It’s not a bad thing that the game is trying to be something more than just a puzzle game, it just feels like it’s trying too hard.

The game is based on a comic book series, which admittedly I haven’t read. Perhaps if you already feel a connection with these characters from reading the comics it’s easier to get into their adventures.

Full Disclosure: This review is based on a PC review copy of Destination Primus Vita: Episode One Austin given to HeyPoorPlayer by the publisher.