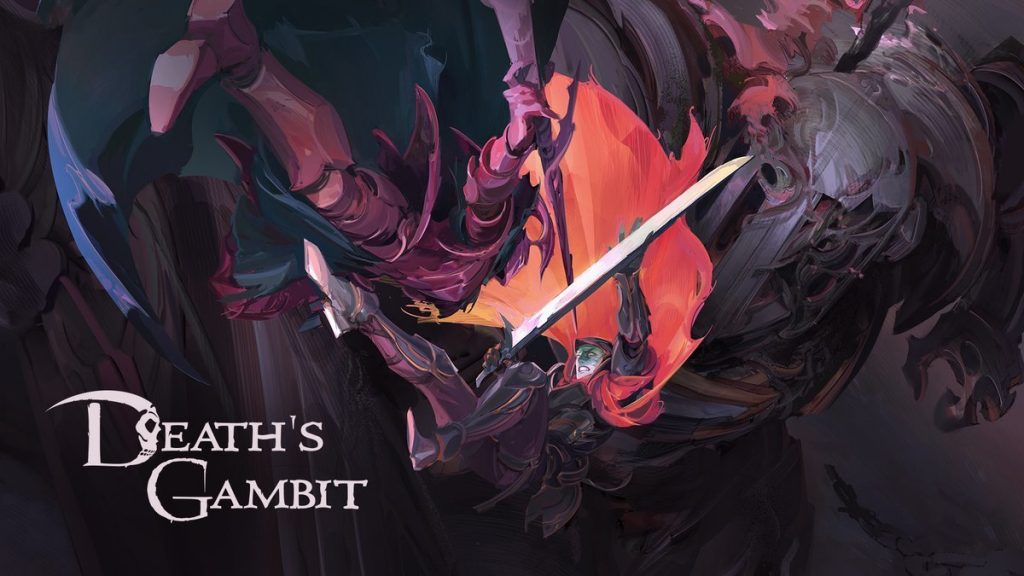 When things are going as they should, Death’s Gambit is one of the most fantastic games I’ve played this year. Developed by indie studio White Rabbit and published by Adult Swim Games, it does a brilliant job of deconstructing FromSoftware’s Dark Souls formula and transplanting it into the second dimension while keeping its spirit surprisingly intact. Featuring tense boss battles, a deep skill tree, and some truly breathtaking atmosphere, the game has so much potential.

Unfortunately, at least in its current state on the PlayStation 4, frequent, frustrating crashes really hurt the overall experience. The end result is a game that delivers short bursts of delight and wonder punctuated by pure frustration.

A Game With Soul 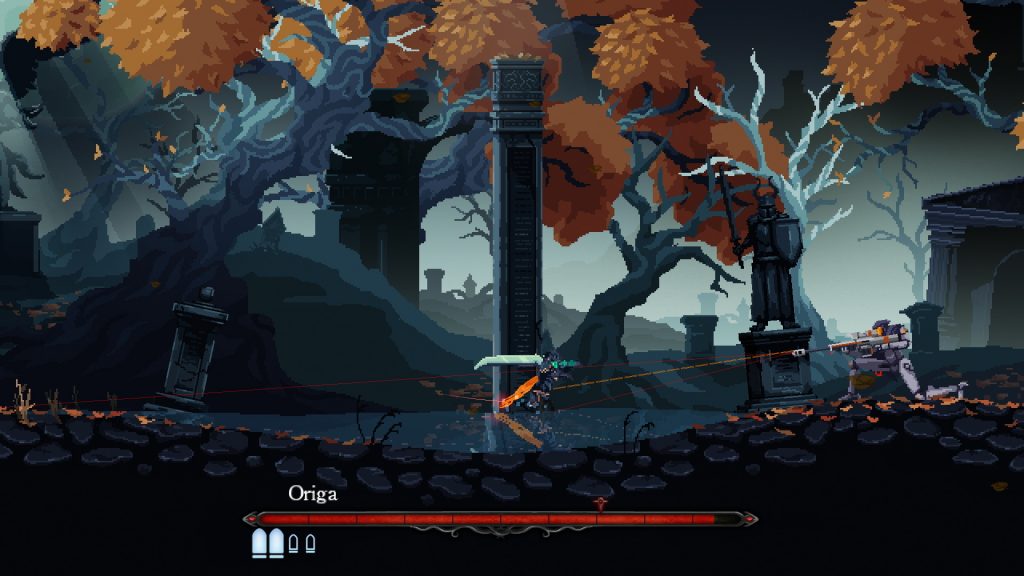 Nothing like bringing a really big knife to a gunfight.

Death’s Gambit’s story puts you in the bloodied armor of Sorun, a knight who, after a failed expedition to Siradon, is brought back from the dead by Death and tasked with destroying the immortal’s source of power hidden deep in Siradon’s inner sanctum. Much like FromSoftware’s brutal RPG series that inspired it, Death’s Gambit allows you to choose from a number of unique character classes. Some of these seven specializations include Soldiers, who make balanced fighters, Blood Knights, reckless warriors who can regain lost health by quickly retaliating, Wizards who, obviously, specialize in magical abilities, and Acolytes of Death, scythe-wielding badasses who can restore shattered Death Idols (think campfires) where you can heal and upgrade your abilities.

It’s honestly pretty remarkable just how well White Rabbit has managed to replicate the Dark Souls formula here. Despite the transition to 2D, the combat feels just as weighty and deliberate as the game that inspired it. And the world you explore is crafted with a watchmaker’s precision, as each area is littered with clever shortcuts and hidden pathways that tie them all together.

I had a lot of fun wandering off the beaten path to collect strange relics to unlock new areas. Likewise, I loved farming larger, more challenging enemies in hopes that they’d drop rare gear that I could then upgrade in the game’s hub world of Sanctuary to turn my undead fighter into a veritable force of destruction. Hidden chests are also frequently hidden in clever, just out of reach places. And they often contain feather upgrades (think Estus flasks) which add to your stock of healing items and can also be exchanged to beef up your damage output.

All of this sounds great, right? Well, I certainly thought so.  I honestly loved all of the customization options Death’s Gambit put at my fingertips. And the game’s labyrinthine evoked feelings of the first time I explored Dracula’s castle in Castlevania: Symphony of the Night. That’s why it pains me so much to say that despite these strengths, it’s really hard to recommend the game in its present form.

Running The Gauntlet of Glitches 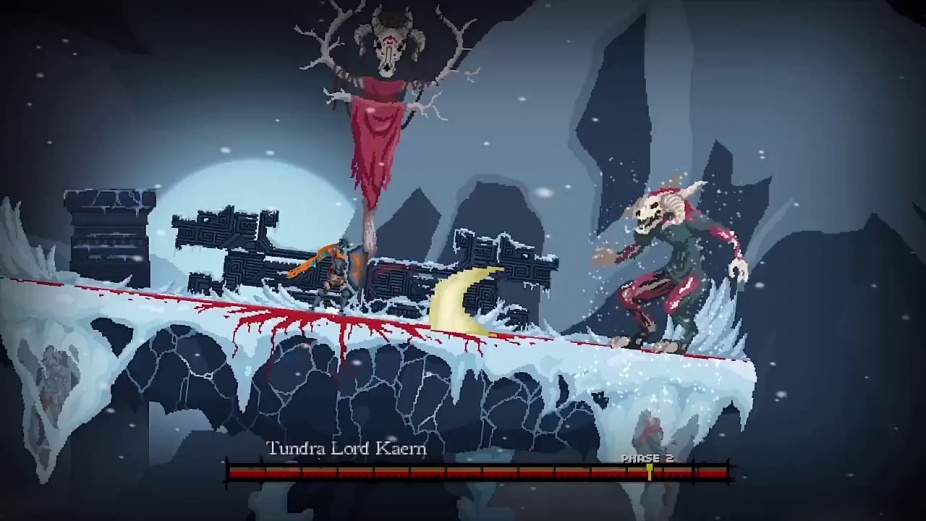 The challenging boss encounters are easily the highlight of Death’s Gambit.

I mean it when I say I loved all of the customization options Death’s Gambit put at my fingertips. And the game’s labyrinthine evoked feelings of the first time I explored Dracula’s castle in Castlevania: Symphony of the Night. That’s why it pains me so much to say that despite these strengths, I just can’t recommend plunking down the cash on it right now. Because whenever the action starts to get really good (at least on the PlayStation 4) you can almost always count on the glitch gremlins ruining your good time.

Much of Death’s Gambit’s storytelling is told through interactive dream sequences that occur in-between deaths. The thing is, more often than not, these result in error messages explaining that the game is unable to fetch “x” asset or command. Without fail, these glitches always end up breaking the game and sending you back to the desktop. Sometimes they’re preventable. For example, one boss fight later in the game would crash whenever the enemy cast a particular spell. After some digging, I discovered the only way to prevent this glitch from happening was to manually change the resolution settings for my PS4 Pro from 4K to 1080p. While this certainly made my game less easy on the eyes, it did thankfully fix the problem. However, this didn’t stop another debilitating bug from crashing the game once again an hour later.

All told, I counted over a dozen instances of crashes during my time with Death’s Gambit. This is far more than any other game I’ve played on the system. And that’s a real shame. Because beneath all of the bugginess, there’s a real gem of a game lying beneath the surface just begging to be explored.

Sure, I was able to beat the game eventually. But anyone who’s played a Soulslike knows that success is all about momentum. And there’s no better way to ruin your flow than having to reload a save file several times in one sitting. Simply put, the game should not have released in this shape.

Shining In The Darkness

I sincerely hope Death’s Gambit receives the patches it so desperately needs. Because beneath the bumps and bruises, there’s an excellent game here that’s well deserving of your time. Its combat system is superb. The world is sprawling and immaculately designed and teeming with secrets to explore. And the story, unlike many games in the genre, is actually really heartfelt and sports some outstanding voice acting that really helps bring its undead cast to life. Still, if you’re not prepared to sit through dozens of crashes on your journey to Siradon — and really, why should you be? —then you should probably sit this one out for now. However, if you have the option, you should really consider picking the game up on another platform.

As it stands, the PlayStation 4 version of Death’s Gambit is a mess. It’s a textbook example of why the value of proper playtesting can’t be overstated. Still, the game isn’t beyond redemption. With some added polish and patches, it could be well worth adding to your PS4 library. Sadly, that day isn’t today.

So, are you playing Death’s Gambit? If so, have you been experiencing the same problems we had during our review playthrough? Be sure to let me know in the comments below.

Full disclosure: This review is based on a copy of Death’s Gambit given to Hey Poor Player by the publisher.

Kicking things into over-Rive I’ve been following developer/publisher Two Tribes for quite some time. The company has produced several favorite games of mine, including the puzzler RUSH and the platformer EDGE.…