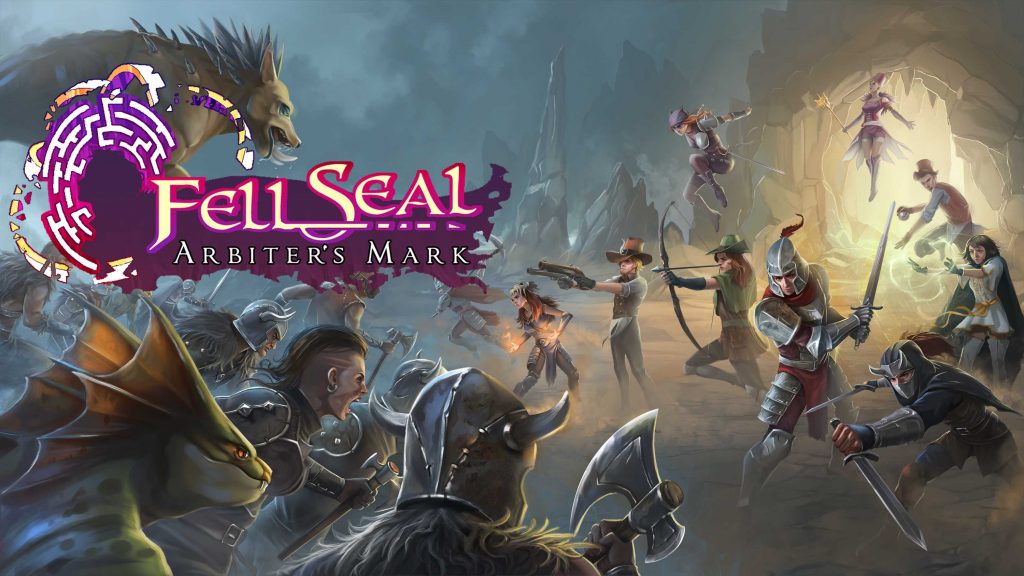 It’s been over two decades since Final Fantasy Tactics first released. And, despite the passing of time, Squaresoft’s classic strategy RPG remains one of the most influential games in the genre. Never has this been more apparent than with Fell Seal: Arbiter’s Mark. Recently released on Early Access, developer 6 Eyes Studio’s latest project takes amble cues from square’s 1997 masterpiece such as its isometric, turn-based battles, engrossing job system, and sweeping orchestral score to create an experience that, even in this early stage in its development, no fan of the genre should miss.

The world of Fell Seal is presided over by a council of Immortals. These godlike figures rely on an order known as the Arbiters to keep the peace in a land that’s drifting ever into turmoil. One night while on patrol, seasoned Arbiter Kyrie and her eager protege, Anadine, witness a nobleman butcher a man in cold blood. However, after arresting him and taking him to the Immortal’s fortress, he is freed by the Immortals and given the title of “Marked One”. Marked Ones are mortals who’re sent on a pilgrimage to visit four shrines across the land. To make matters worse for Kyrie and her allies, they also happen to be above the law. What ensues is a surprisingly well-written story that will keep you engaged over the course of the Early Access build’s 24 story missions (and a ton of optional skirmishes). 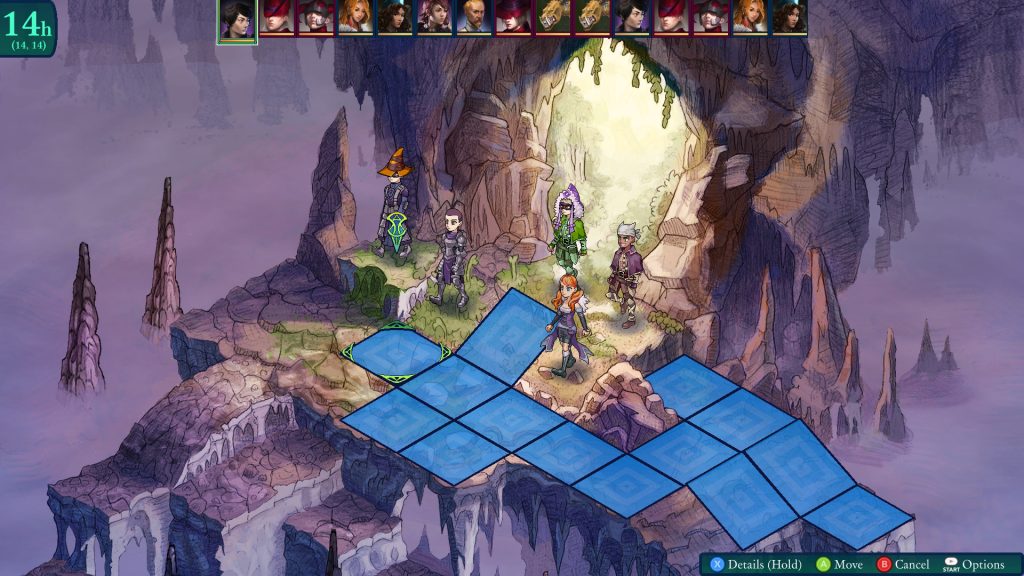 Like I said at the outset of this preview, Fell Seal: Arbiter’s Mark is a strategy RPG. That said, it should come as no surprise that you’ll spend the bulk of your time in battle. While navigating the world map, you’ll come across numerous story battles and optional patrols. If you’ve ever played Final Fantasy Tactics or Disgaea, you’ll feel right at home here. Each fight starts with you choosing which characters you wish to deploy. Then, once, the battle begins, you’ll move your army across a grid-based battlefield in turn-based fashion.

Combat feels tight and snappy, and the stages force you to use your noggin thanks to their surprising degree of verticality and aggressive enemy AI, which almost always singles out wounded warriors and seldom misses an opportunity to heal. That’s not to complain, though. The computer puts up enough of a fight to keep you on your toes without ever feeling overpowered or omniscient. It strikes a good balance ensures the fights stay fresh and entertaining. 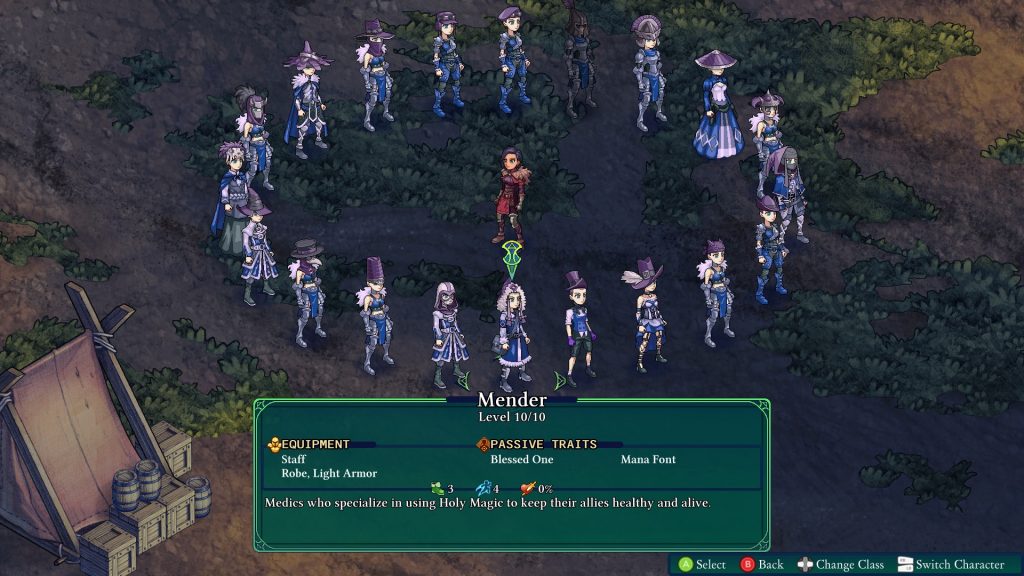 Fans of Final Fantasy Tactics’ Job System are in for a treat in Fell Seal: Arbiter’s Mark.

Each character class each has its own specialization. For example, mercenaries are hearty up-close brawlers. Wizards, on the other hand, can zap foes from afar with elemental magic. Menders, well, mean wounds, and so on and so forth.  However, as you gain experience, you’ll earn AP which can be spent to upgrade your skills and unlock new and more interesting classes. These include knights who serve as amazing protectors and plague doctors who specialize in wreaking havoc on the enemy with debilitating concoctions.

Each of these classes has 10 skills you can spend AP to master. Additionally, each character can be trained in sub-classes. So, if you want to recruit a healer who’s handy with a hand axe, you’re in luck. Likewise, if you want a healer with a fondness for flames, the world is your oyster. This gives the player a staggering amount of customization options to experiment and shape their ideal squad.

If this sounds an awful lot like Final Fantasy Tactics‘ job system, that’s because it is. And honestly, I couldn’t be happier about it. Developer Six Eye Studio has done a wonderful job of adapting one of the genre’s most beloved system’s into Fell Seal, and it’s just as engrossing as ever. 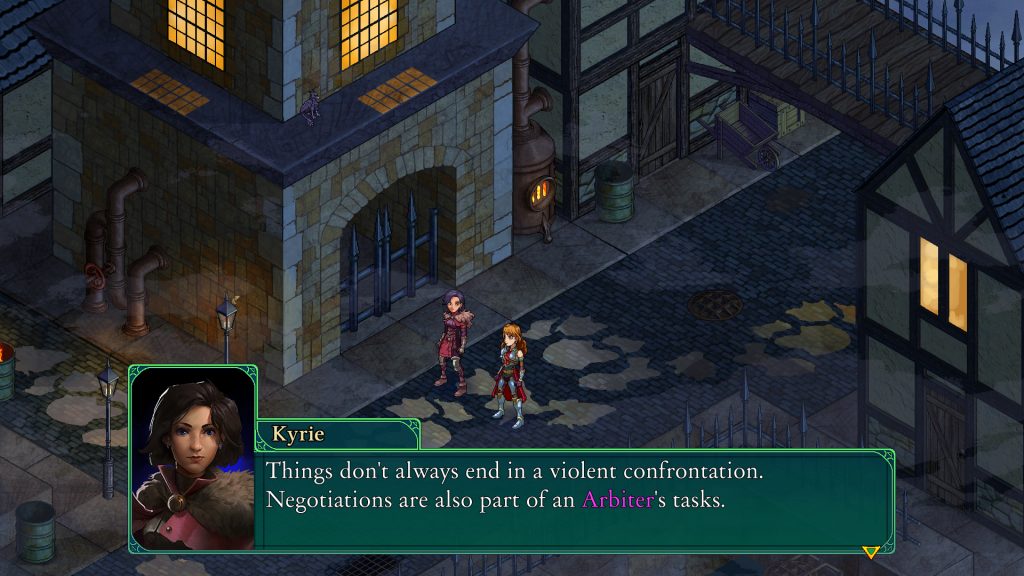 Just look at those gorgeous portraits and hand-drawn environments.

When it comes to presentation, Fell Seal largely delivers the goods. Each area has a charming, hand-drawn look that’s very easy on the eyes. Battles unfold over a wide variety of terrain, from verdant forests to ancient ruins. And each locale is brought to life with tons of color and detail. I also really like the character portraits, both for the main cast and customizable troops. As for the character sprites themselves, they’re perfectly serviceable. However, custom troops and humanoid enemies do lack any real personality due to their cobbled-together nature, as they’re all crafted from the same pool of accessories, faces, etc. Despite this minor quibble, they get the job done. Monsters and bosses, on the other hand, look outstanding, and magical spells pack a welcome degree of flourish – though they could use a few more frames of animation.

As for the aural front, Fell Seal: Arbiter’s Mark is a feast for the ears. Seriously, this might be one of the finest soundtracks I’ve heard in 2018. Featuring pumping war marches and grand orchestral themes, each track does an incredible job of bringing the battles to life and adding weight to the story’s more touching moments. I really hope developer Six Eyes Studio and publisher 1C make the soundtrack available for purchase. It’s just that good.

Darlin’, do you wear the mark?

In case you couldn’t tell, I really enjoyed my time with Fell Seal: Arbiter’s Mark. And if you happen to be an SRPG fan, then I’m sure you will too. Smartly taking their cues from one of the genre’s most iconic hits while adding their own engaging narrative, developer Six Eyes Studio has crafted an incredibly addicting adventure that demands your attention. While the full release is still a ways off, this early sample shows tremendous promise. If this early build is any indication of what’s to come, then PC-bound role-players are in for a real treat when Fell Seal: The Arbiter’s Mark releases in 2019.

Feel like diving into the adventure? If so, you can check out the game for yourself on Steam.

Full Disclosure: An Early Access key was provided by the publisher.

Kinda bug and kinda snack ~ try to catch ’em in your trap! If there was ever an award given for “delivering on hype,” Bugsnax would win it for 2020.…