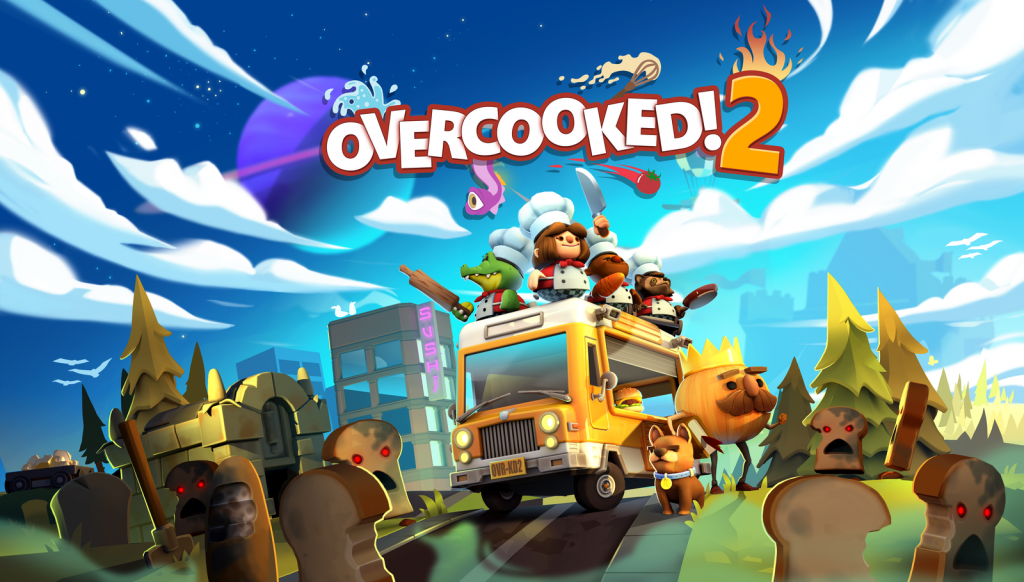 I was very much excited to play Overcooked! 2. Having already gone through the culinary journey that was Overcooked! not once, but twice, and loving it both times, it was safe to say that I was hungry for more — and when Overcooked! 2 was finally served to me, I ravenously dug in. Unfortunately, while it was good, it wasn’t as delicious as I had initially anticipated. At first, I wasn’t sure why. It was essentially the same recipe. In fact, outside of a few tiny tweaks, the game played exactly the same. So why wasn’t I enjoying it as much? Had I gotten bored of this dish? Was my palate changing? No, no, that wasn’t it. But what was it? I just couldn’t figure what was wrong — why I just wasn’t enjoying this game as much. And then, it hit me; what we had here was a classic case of over-seasoning.

Overcooked! 2 is kind of like the video game equivalent of over-salting something. The folks over at Ghost Town games knew that the original OC‘s quirkiness was a large part of what made it work so well, and decided that OC2 would be even quirkier. Unfortunately, more isn’t always better. OC2 is the same dish as before, but with, well, too much “seasoning”. It still takes like the same dish, and it’s still good, but it’s impossible not to immediately notice how covered in the proverbial salt of quirkiness everything is from the very beginning. And, as we all know (or at least should know), too much salt is bad for you.

Night of the Living Bread 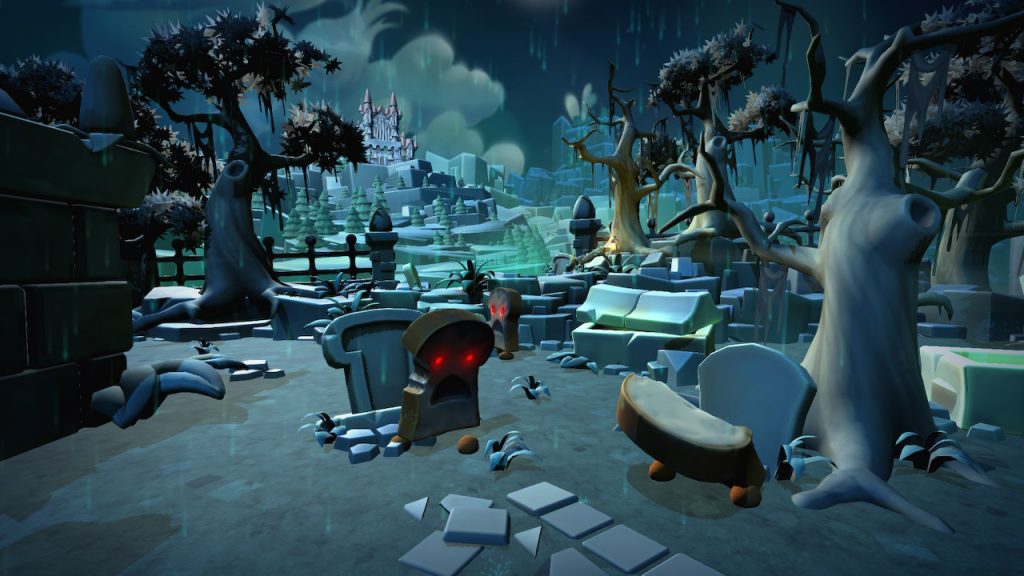 I know that bread’s supposed to rise, but this is ridiculous.

Overcooked! 2 tells a story whose whimsy, wackiness, and understated terror is only matched by that of its predecessor. The game once again begins with our old friend the Onion King who this time around, for some reason or another, has decided to try his own hand at the culinary arts. Rather than cooking like everyone else, however (because nothing is ever simple with this guy), the Onion King decides to create a dish he found within the legendary (and very suspicious-looking) “Necro-Nomnom-Icon” — and it goes about as well as you’d expect. Rather than creating an extravagant dish, our round and royal ruler raises the unbread. No, that’s not a misspelling; he literally creates zombie bread. And it’s up to you to stop them from destroying the Onion Kingdom!

As with Overcooked!, OC2‘s story doesn’t have much of an impact on anything. It’s there for flavor (hah!), if you will. But that doesn’t make it unnecessary. Despite the game being almost entirely focused on gameplay, OC2‘s story still helps to create a sense of goofiness that sets up the tone for the rest of the game. And, while it doesn’t necessarily still explain why you’re doing everything that you are, the small bit of provided exposition is appreciated all the same. 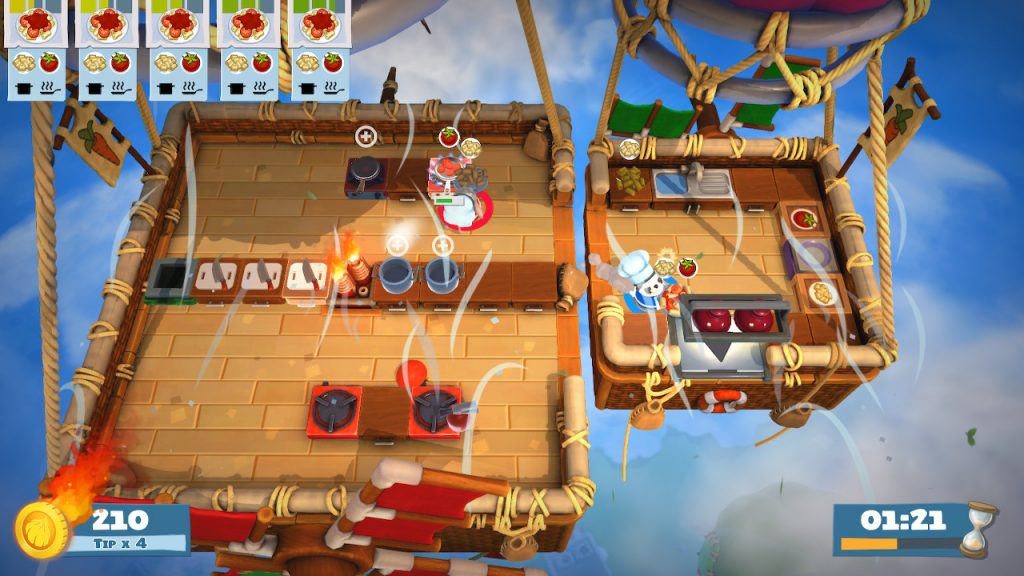 Mechanically speaking, Overcooked! 2 offers a brand of arcade-like gameplay very similar to that of the original OC. Players are once again tasked with quickly cooking and serving up as many dishes as possible within the time limit, while also doing so with both speed and accuracy. Most of OC2‘s dishes are rather varied from one another, and require players to utilize different ingredients and cooking methods depending upon the dish. Fortunately, none of them are particularly difficult to make. In order to make sure that players aren’t ever overwhelmed with what they’ll be cooking (other parts of the game do that well enough), each of OC2‘s themed levels feature very specific menus and only offer players the ingredients and appliances that they actually need. While this might not sound like much of an issue for some people, especially those who may not have played either OC game, veteran chefs are surely already aware of how frantic the kitchen can get. By eliminating the unnecessary within each level, OC2 is able to create a multitude of challenging environments that focus less on the player’s ability to memorize recipes and more on their ability to successfully interact with the level that they’re playing.

Despite being almost exactly the same, Overcooked! 2 does make two minor improvements which, although seemingly small, add up in a big way. The first is the introduction of the tip multiplier. While both OC games award ” tip points” for a correctly served dish (based on how quickly it was served), regardless of where it is in line, OC2‘s tip multiplier lets players collect up to 4x the normal tip points for following the orders, well, in-order. The game, of course, compensates for this by raising the minimum win condition scores considerably, but it’s still possible to go way above and beyond the bare minimum if you keep your multiplier throughout the entire level. And what is Overcooked! 2‘s second improvement? The fact that you can now throw food! OC2‘s levels are, more often than not, incredibly hectic, and footing isn’t always stable. While being able to throw food around doesn’t fix all of the problems that you may encounter within each of the game’s levels, it certainly makes some things a heck of  a lot easier. 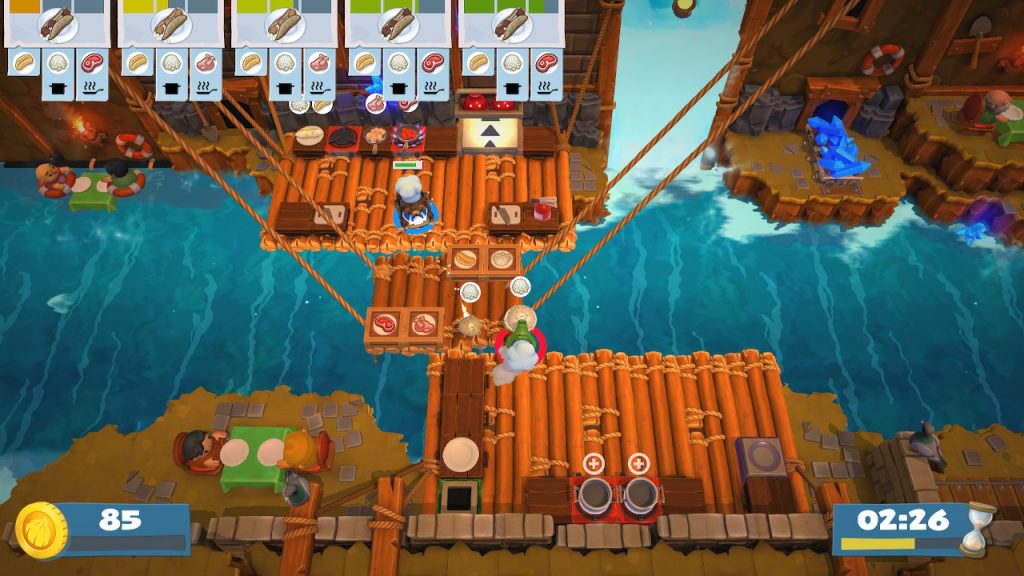 This level was a little shaky — in more ways than one.

Now, let’s get to that salt that I was talking about before. As I’ve already mentioned, despite being food-themed, level gimmicks are Overcooked! 2‘s real bread and butter. And, as such, you can expect to find them in every level. That in and of itself doesn’t bother me. What does bother me, however, is the intensity at which they’re started. The original Overcooked did very well with slowly cranking up the difficulty over the course of the entire game. While always present, gimmicks weren’t the driving force behind the entire game. Many of its levels, especially during the first half of the game, were focused more on testing the player’s ability to get into the flow of cooking and serving as quickly as possible, while also dealing with minor inconveniences. Ridiculous gimmicks were served up to players eventually (those ice levels were the bane of my existence in that game), but they were done so after the game made sure that players knew what they were doing.

That’s not the case with Overcooked! 2, though. It’s obvious from the very beginning that OC2 is going to try to be as crazy as possible, and that players are just going to have to deal with whatever the game throws as them. In terms of pure creativity, I applaud Ghost Town Games. Most of their levels seem to be very inspired — especially those that transition from one setting to another mid-level. But that creativity didn’t entirely translate to a fun time. More often than not, both myself and my friend who was kind enough to play through the game with me found ourselves grumbling about whatever current-level predicament we had been placed in. And that’s sad, because the levels that didn‘t have us cooking on top of bridges and inside of fire-spewing mines were a lot of fun. I like the ideas behind Overcooked! 2‘s gimmicks, and I appreciate the developers for trying to inject as much flavor into this game as possible. But the end result was something that was a bit too much for my palate. 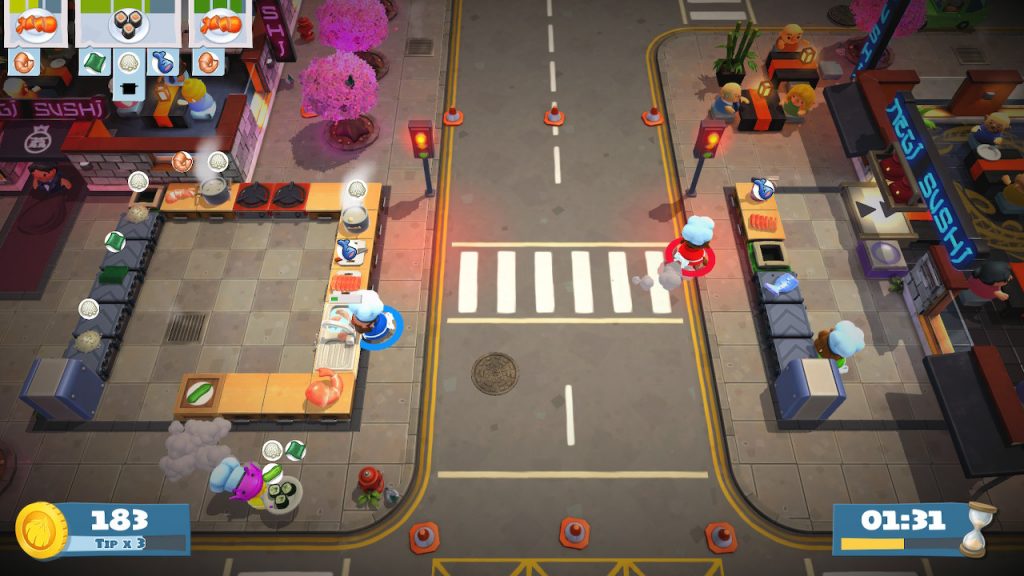 Too many cooks in the kitchen? Maybe. But it’ still a recipe for fun!

Story Mode may be the meat and potatoes of Overcooked! 2, but the game features two additional modes as well — Arcade and Versus. Arcade Mode, strangely enough, is almost exactly like its Story Mode counterpart, with the only real differences being that there’s no world map and that, instead of selecting a level, you select a theme and the game picks a level based on said theme. Personally, I’m not really sure why you’d play Arcade Mode outside of the fact that it features online multiplayer (hooray!), especially when you could just go into Story Mode and pick the levels yourself. Perhaps it would be good for parties, or gatherings requiring quickplay features? I’m really not sure. Still, its inclusion isn’t a bad thing. When it comes to game modes, the more the merrier I always say!

If you’re tired of playing nicey-nice, Overcooked 2 also features a Versus Mode which — you guessed it — lets players go head-to-head. Versus essentially works in the same way as OC2‘s other modes, with players attempting to finish the level with the highest score possible, but the fact that you’re competing against someone else does make it a little more exciting (if not also nerve-wracking). Oh, and you can also mess with you opponents to varying degrees depending upon the levels that you’re playing. Just keep in mind that no dish is worth a spoiled friendship!

Overcooked! 2 didn’t slake my hunger for additional Overcooked! goodness as much as I would have liked, but that doesn’t mean that it isn’t a dish worth remembering. Despite my issues with its proverbial over-salting, Overcooked! 2 still stands rather proudly as a fun, frantic, and well-made party game. And, while I don’t know that I would be as eager to dig back into this game as I was with the first (metaphorically speaking, anyway), I still enjoyed my first serving of it. You know, mostly.

Full disclosure: This review is based on a copy of Overcooked! 2 given to Hey Poor Player by the publisher. 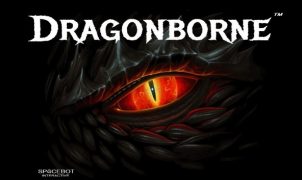 Dragonborne quite successfully captures the spirit of the Game Boy RPG (both the good and the bad!) in its own, unique way.