A waterlogged walking simulator with some quality scares 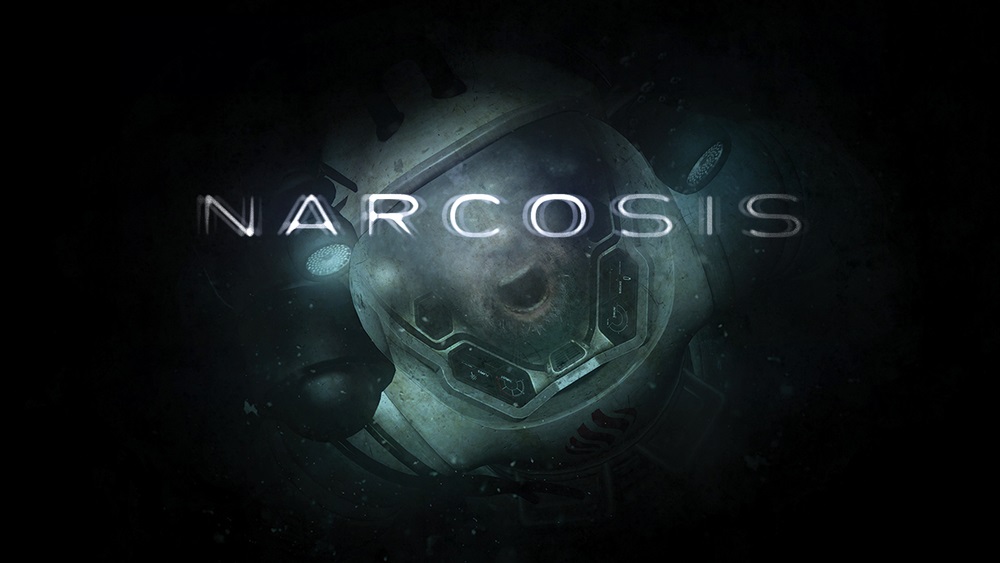 Set against the inky black of the ocean floor, Narcosis is best described as a walking simulator with a heavy dose of psychological horror thrown in for good measure. You play as Kip Mattas, the lone survivor of a catastrophic disaster at a deep-sea methane drilling rig called Oceanova. One day during a seemingly standard walk along the seafloor, a massive earthquake strikes. The immediate impact kills your nearby companion and reduces the installation to mangled rubble. What follows is a dangerous journey into the depths of the sea – and madness – as you work to uncover the fate of your 19 fellow crew members and make your way back to the surface.

It’s a premise I quite like. After all, the ocean floor is still a greatly untapped setting for video games, and Narcosis does an excellent job of making the player feel hopelessly isolated from the world above. At its best, developer Honor Code’s haunting, submerged take on the formula that popularized such modern classics as The Vanishing of Ethan Carter and The Long Dark is a moody and atmospheric trek that stands out thanks to its excellent writing, quality voice acting, and some genuinely creepy moments. However, some mechanical quirks hang like barnacles from an otherwise intriguing adventure. 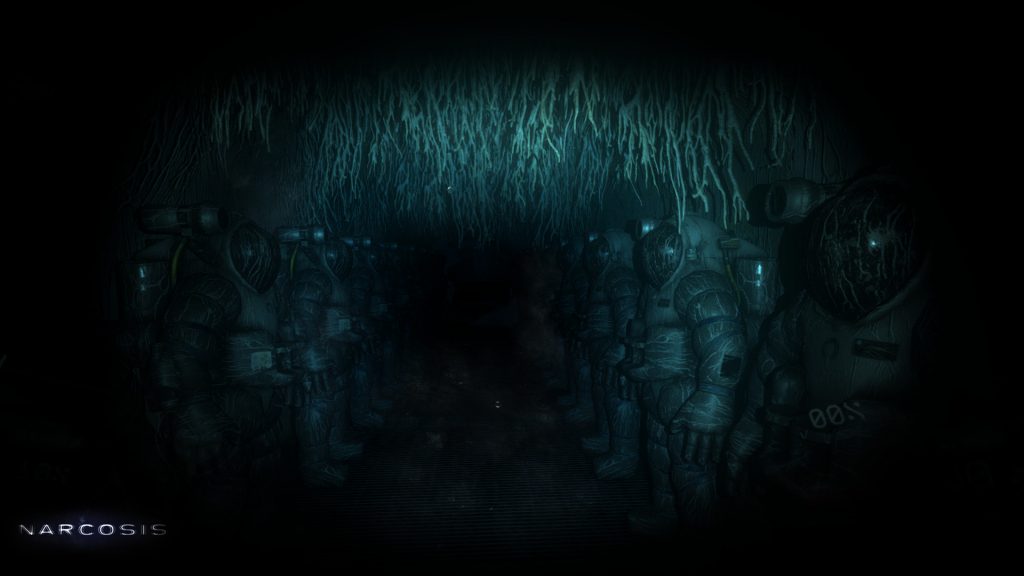 The lines between madness and reality blur constantly in Narcosis.

The star of the show is your dive suit. This hulking exoskeleton, affectionately dubbed by the crew of the Oceanova as a “walking coffin,” is all that keeps you safe from a sea is full of deadly predators. These threats include hungry anglerfish, demonic cuttlefish, and spindly-legged spider crabs. And, just as luck would have it, all of them just want to smash the glass of your dive suit’s visor to smithereens. You do have a few tools at your disposal, however. Your suit can launch flares which can be used to distract enemies momentarily. Additionally, you also have pocketknife that can be used to skewer unfriendly marine life. Sadly, unresponsive controls and inconsistent enemy AI make both of them pretty unreliable over the course of Narcosis’ three-hour adventure.

There’s often a second-long delay between when you press the button and when your knife swings. This inevitably results in lots of unnecessary chunks being taken from your air supply. Oftentimes I found myself simply letting enemies latch onto my visor like blood-sucking suction cups so that I could button mash them to death because my knife swipes felt so inconsistent in their execution. Honestly, you’re better off just avoiding enemies whenever you can rather than trying to fight them off. It’s just not worth the trouble.

What’s worse, however, are flares. These are meant to distract crabs and other enemies who can kill you with a single slash and can’t be killed with your knife. The problem is these creatures only react to maybe one out of four flares launched. Let me tell you, nothing is more frustrating than watching your oxygen meter tick down as you waste half of your ammo trying to get a crab to step out of a narrow passageway so that you can slink on by. That said, they end up becoming all but useless. Eventually, I decided to stop using them altogether and try my luck at outwitting their rather mindless AI instead.

While the flora and fauna of the deep are dangerous, the biggest threat is your own fear. As I said at the outset of this review, the game puts a heavy emphasis on its horror elements. See, you can only carry a limited amount of oxygen at a time in Narcosis. And once you encounter the battered remains of your fellow miners, patrolling enemies, or even spectral apparitions and you slip into insanity, all of these things will cause you to panic. Once panicked, as you’d expect, you’ll quickly begin to burn through your precious air supply. Luckily, oxygen canisters are fairly plentiful. So as long as you aren’t aimlessly wandering around, you probably won’t find yourself suffocating too often. Rather, the mechanic does a good job of keeping you focused on your next objective and not dawdling too much in any particular area. 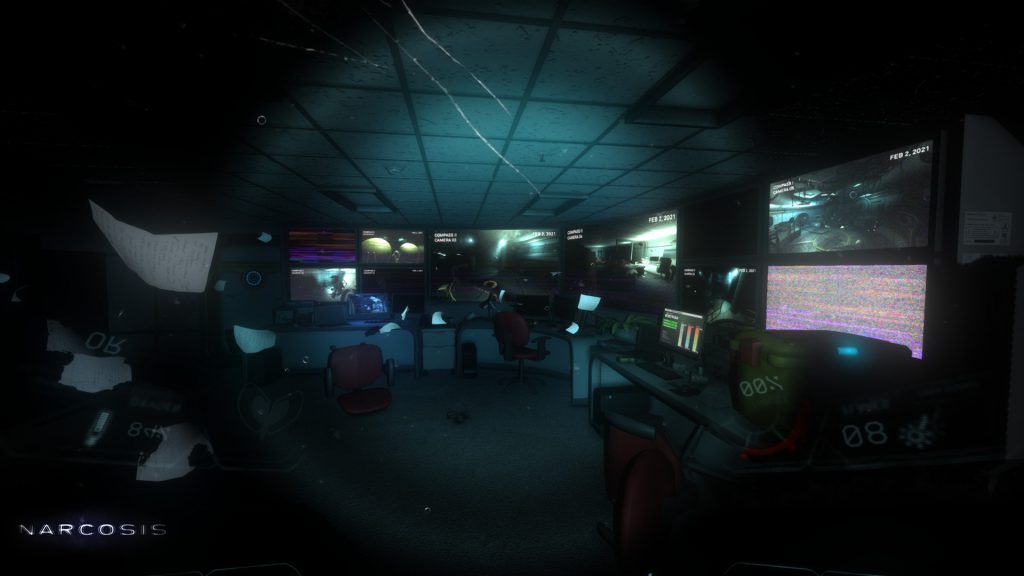 Just another day at the office.

If there’s one area where Narcosis really shines, it’s in its storytelling. Honor Code has succeeded in crafting a genuinely unnerving tale that will keep you guessing. Without going too deep into spoiler territory, you quickly learn that Kip’s problems extend beyond the ruined rig itself and into his troubled psyche. Over the course of your journey, you’re regularly fed tidbits of information as Kip is interrogated in present-tense about the catastrophe and the measures he took to survive. These moments shine thanks to the game’s outstanding writing and some really well-delivered voice-acting. These elements combined to keep me glued to my controller just to see just where things ended up going.

In fact, the storytelling was so impressive that it made it easier to overlook Narcosis’ rough and dated visuals, some middling puzzle designs, and the other gameplay niggles that frequently popped up on my death march to the end credits. If you happened to enjoy Bloober Team’s Layers of Fear, I think you’ll really enjoy the similarly surreal and psychotic tone of Narcosis as well.

While not free of its share of issues, I still enjoyed my time with Narcosis. It’s an immersive, unsettling tale told in a genuinely creepy setting. Is it as memorable as the genre’s better-known titles? No, not really. But it’s intriguing nonetheless. And its strong writing and voice-acting were enough to make me often overlook its more frustrating moments. Still, if you’re looking for a meaty expedition, you might want to look elsewhere. The game is pretty brief, with a full playthrough clocking in at just shy of four hours. Though honestly, this is probably for the better. As it stands, the story is very well paced and concludes before overstaying its welcome.

Narcosis’ novel setting and heady narrative certainly showed promise. And with a little more polish and refinement, it could have been a sunken treasure. Despite some broken mechanics and stale puzzle designs, its strengths do manage to keep it afloat. That said, psychological horror fans looking for some deep sea scares still may want to take the plunge.

Full disclosure: This review is based on a copy of Narcosis given to Hey Poor Player by the publisher. 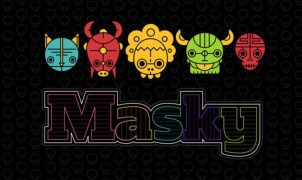 I’m not mask, just disappointed Masky is back; originally on iOS, Android, and Steam, IGJAM16’s Best Mobile Game at Gamescom16 has joined the ranks of indie games on the…