No, there’s something in YOUR eye 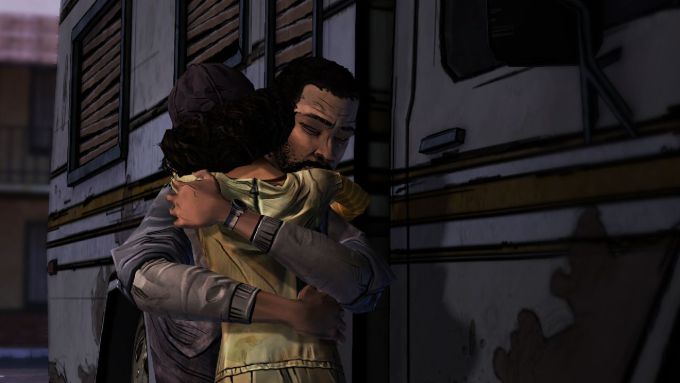 Warning: This article contains major spoilers for The Walking Dead season 1. If you haven’t finished the game yet, bookmark the post and come back when you have. Seriously. Spoilers.

Telltale Games’ The Walking Dead series is the benchmark of episodic video gaming. Never has a video game been so simple in it’s mechanics yet present so many conflicting and complicated narratives to deal with. Episode by episode the stakes rose, culminating with Game of the Year awards for the first season back in 2012. With the final season imminent, what better time to look at start of the harrowing journey?

The fabulous storytelling Telltale equals if not betters that of the comic book and TV show. Regardless of the medium, The Walking Dead is a universe tinged with tragedy, unrelenting tragedy. After all, what is there to look forward to during a zombie apocalypse?

Another common theme is children. In the TV/comic series, you have Rick Grimes and his son Carl, a boy who is mentally forced into adulthood by the zombie apocalypse and its dangers.

One of the few moments of respite 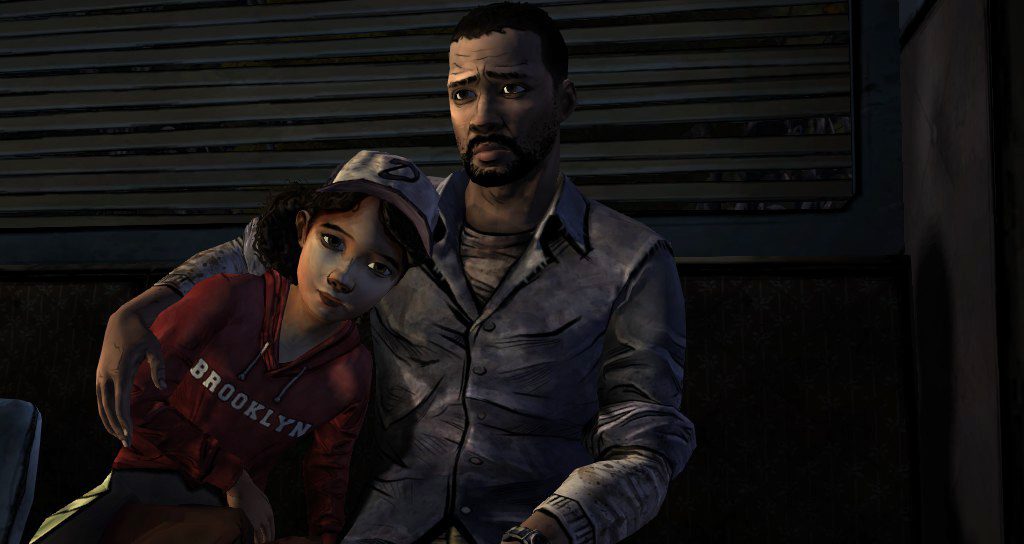 “Soon all this will be yours….sorry”

Telltale’s incarnation presents Lee and Clementine, a father/daughter (but-not-really) relationship brought together in unlikely circumstances; Lee, a convicted murderer of his wife’s lover, escapes his police escort vehicle after it, and the escorting officer, meet their end via nearby walkers. With Clementine, she is home alone with only her tree-house keeping her out of harms way. She spots Lee after he escapes his first zombie encounter.

Given that Lee is the main playable protagonist it is easy to forget, sympathise or maybe even empathise with this initial murderous narrative. Especially as you are ensuring Lee’s survival as if it was your own. This is a somewhat polar opposite to Rick Grimes, who is a man of the law. But as the chapters unravel, Lee often becomes the voice of reason, recognised by many as as leader, and is looking out for the child all the while. Just like Rick.

Eventually it is revealed that Lee had always wanted a family of his own. His wife’s long-distance work and eventual extramarital affair ended those prospects, regardless of Lee’s subsequently murderous actions. I’m not crazy enough to condone murder of course, but this narrative is repeatedly thrust upon you to test how you may or may not reason with it, and the others around you. This includes Clementine, who is only 9 years old by the end of the first season. Her eyes and mind are already being forced wide open to a world a child should never have to endure. For Lee, this is a chance at redemption. That redemption comes in the form of Clementine. 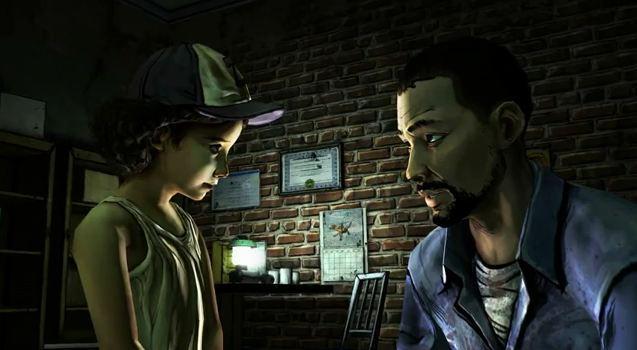 “Remember Clem, in such a situation there is only 1 need. Twinkies”

There are many characters that come and go in The Walking Dead, but Lee and Clementine’s relationship is the bedrock of the first season. It’s how it starts and how it ends, regardless of the decisions you make. Being a father of two myself, it is a relationship that grew deep in my heart. It toyed with my emotions if Clementine went missing; room by room searches provoked only feelings of dread. Not only does protecting Clem becomes Lee’s primary focus, it became mine also.

I’ve played through season 1 twice. Once in 2012, and again in 2017. Both times I made choices based around Lee’s position at that moment, but in fact I was making the exact choices that I would make, not Lee. At first I often decided to lie to save Clem’s feelings, and felt bad for doing so. I think it’s fair to say we’ve all told a little porky here and there to stop a child’s train of thought.

However, a lot has changed in 5 years. My then infant daughter is now well into her seventh year of life, and absorbing information like a sponge. Even from age 4, the cortex begins to operate at the same level as an adults. Moreover, from age 4 a child’s brain is twice as active as any adult due to the increased consumption of glucose. It makes perfect sense, as children grow and develop into adults. Children are more likely to trust and accept what is in front of their eyes, what they are told and what they experience is what life is. And it is this ongoing narrative that almost every conversation with Clem is asking of you.

Sticking with Clem is the key 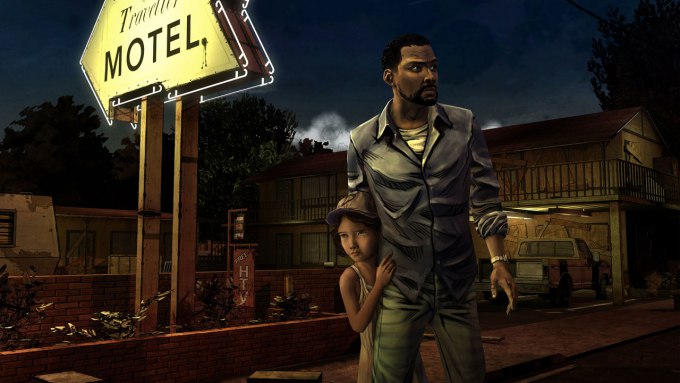 “This place looks totally fine. Nothing like a scene out of horror movie at all”

It was evident on the second play through that I found myself being far more honest, not just with Clementine, but others also. This is where Telltale have succeeded the most; for all the black-and-white answers you can give, there are shades of grey that can equally be successful, or not so, in different ways. Even at Clementine’s young age, she easily determine’s Lee’s criminal misgivings from the simplest of half-truths. The challenge is how you deal with that, as it is unexpected of a child only a few years old.

Then there is Duck. Remember him? Hyper little thing, around the same age as Clementine. Duck is evidently far from ready for any catastrophe due to Katjaa’s mothering ways, and I would expect no less from most mother’s in the same situation.  In both play-through’s, my instinct was to save Duck instead of Herschel Green’s son. But this first major decision is a trick; Shawn dies no matter what you pick and is merely a points scoring exercise with Kenny, Duck’s dad. Telltale, you bastards!

Back in 2012 my son was an excitable, full-of-beans young man who was rather hyper at times, but equally affectionate. So like Duck, the potential was there for him to get into trouble, or not be fully aware of the dangers (hardly zombie danger, but still) around him until it’s too late. Throughout Duck’s eagerness my instincts were always to protect a child. Even though he wasn’t my own. Between a grieving mother and an increasingly unstable father in Katjaa and Kenny respectively, my inclinations were toward being their voice of reason in a world of tragedy and chaos.

When Duck meets his end after being bitten in chapter 3, the first time I took the mantle of putting him down before returning as a zombie. This is of course a decision that 1) I hope to never ever have to make in real life with my own or anyone’s kids, and 2) I would also be the one to pull the trigger. How on earth would anyone cope with that level or manner of loss. In fact the thought makes me physically sick.

The second time however, the added years of parenthood hit me. I found myself telling Duck’s father, Kenny, who had just witnessed his wife shoot herself in the head with Duck about to turn, that he should finish off Duck. I just couldn’t do it. Damn this game. For some, such choices may seem flippant as it is but a video game. But such decisions ripped at my conscience. Such decisions should never have to be made. And it makes for heart-pounding entertainment.

Transportation is a minor miracle in this world

Did someone get onions out?

This brings us poignantly onto the final scenes of the first season’s final episode. People’s accounts detail distress or being visibly upset at the ‘parent’s’ final moments of the game. It truly is a heart-wrenching scene of which I felt distinct sadness for. Unlike any other in a video game before in fact. All I kept hoping for was for Clem not to die, with the feeling of dread rapidly increasing at the prospect. Despite this, it was also incredibly touching to see how Lee and Clem’s rapport had built up to this point. I’d like to think it’s a similar rapport I’d have with my own daughter, given a similar situation.

In both instances, Lee was hand-cuffed to the radiator and encouraged Clem to shoot him before turning. I’m not sure if I could deal with Clem seeing a zombie Lee, and am only tentatively contemplating replaying the scene if a different way. Even by not triggering a particular outcome, Telltale is challenging me. Toying with my emotions.

Following Lee’s tragic departure from the series, the focus becomes purely on Clementine. She becomes the playable protagonist. In my mind, there is no one better to encapsulate the series than Clementine. She is this Walking Dead‘s Rick Grimes. Visibly older, mentally stronger, Clem is now a hardened survivalist. But still just a child. The decisions you make are now hers, and not of a guardian.

The Walking Dead seasons 1-3 are available on Playstation, Xbox and PC. Chapter 1 of The Final Season has an expected release date of August 14th. 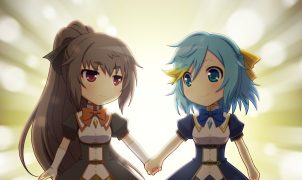 A Smashing (and Slashing) Good Time     I’ll cut straight to the chase, here; Croixleur Sigma is one of the most cliché games that I’ve played in a…