Enter Grimmwood at Your Own Risk 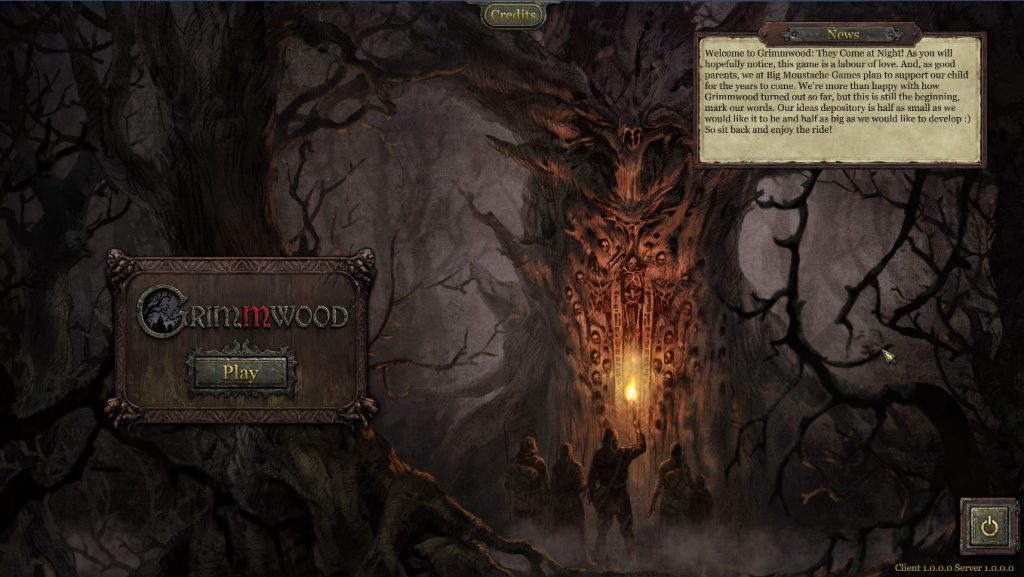 Honestly, I really wanted to like Grimmwood. The style looked interesting and the premise seemed original. That’s pretty much all I ask from a game. But I suppose you can gather from me saying that I “wanted” to like it, that I have one or two problems with it.

Grimmwood is an online multiplayer strategy game that takes place in a dark, cursed land overrun by war and mysterious creatures that really have it in for your village. Every night they will come and attack you, so it’s up to the residents of the village to make sure you are well prepared. Your character has a certain amount of “SP” (stamina points) which they can spend gathering resources, crafting objects or building defences. You only have a certain amount of stamina points, but they can be regained by eating or resting. To prepare for the nightly attack on the village, villagers can scout the area to find out and lower the strength of the attack or increase the village’s defences. This can be done by building or repairing the defence structures of the village, or by electing to defend the village at night. 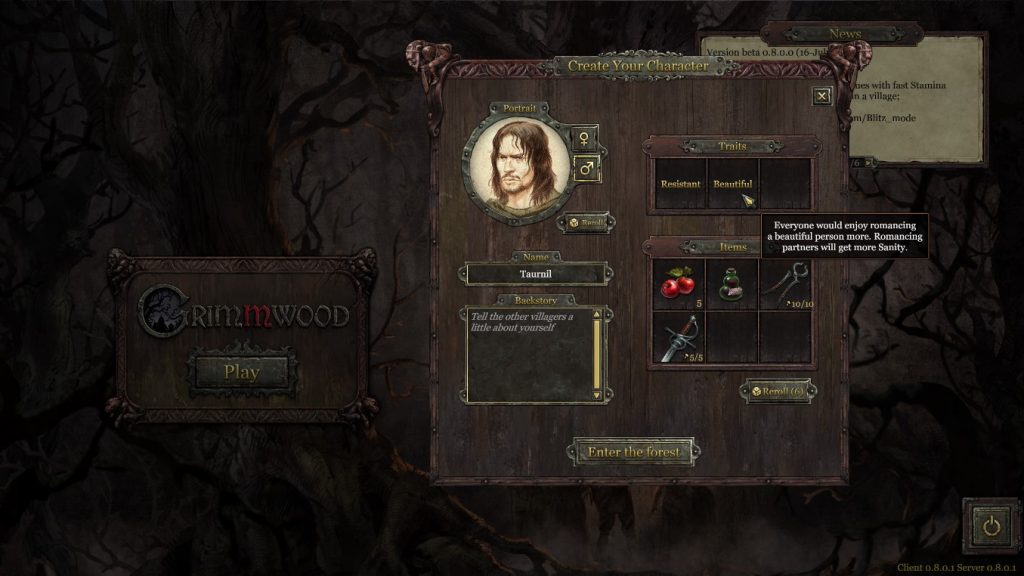 Grimmwood could at least tell you before you enter the village what each trait does, so you could make an informed choice. Also, you don’t get to backtrack once you’ve used all the dice rolls. So it’s not like your choosing from ten possible combinations. So, you could flip through the ten choices to see what each of them means, then still end up stuck with the last one.

It’s also pretty meaningless since you don’t get to see what everyone else in the village has beforehand. Wouldn’t it make more sense to be told what the most popular and least popular traits of the village you’re about to enter before you enter it? Otherwise, you could end up with a whole town of beautiful people with high stamina, but no-one who can hunt, craft or fight.

Made For Up to Forty Players 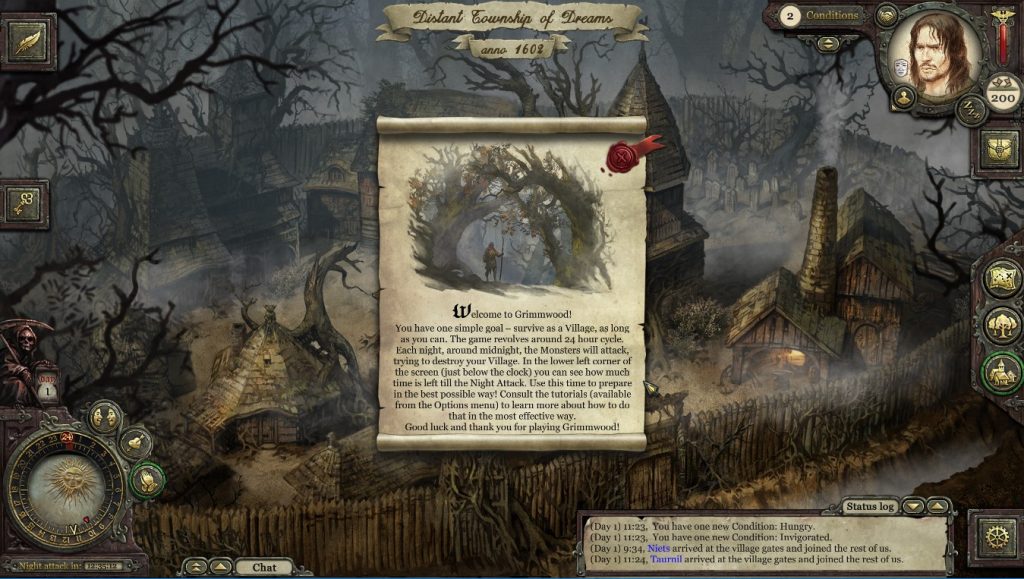 This really isn’t a game you can play with one person. You can technically play it – but be warned, you and your village are going to get completely creamed. Multiple people need to scout to lower your villages defences to a point where survival is actually possible and there is no way you’ll be able to improve the structure of your village at the same rate the strengths of the monsters will grow. I get that this is an online multiplayer game, and obviously, it’s been made for a lot of people. But I don’t want my gaming experience to depend on other people.

It would make more sense if the attacks on the village and how difficult it was to gather resources was relative to the number of people in the village. For example, if a village has fifteen residents, the strength of the monsters could be relevant to up to fifteen people scouting, defending or building. If it’s just you, maybe the monsters could actually give you a chance.

It doesn’t help that SP builds up very slowly. You can increase your SP with decent food, but then you need to go out find and cook the decent food. There is also only so much food your character can eat before they will become overfed. Other than that, all you can do is rest to build up your SP points, which can take hours. All in all, you’re looking at about an hour of gameplay per day, meaning that this game has a long, long-term commitment, but a rather short time commitment. 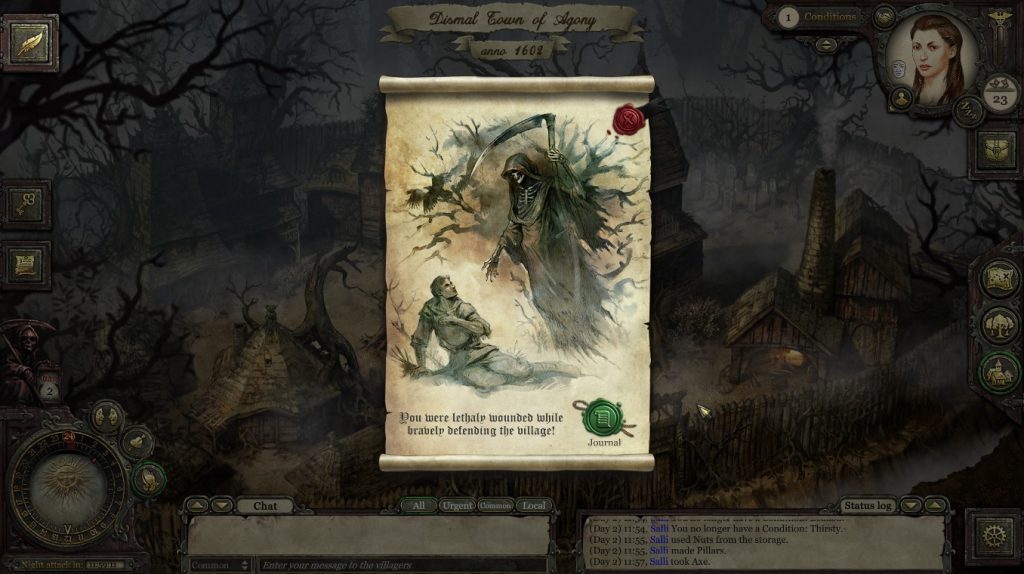 After standard mode failed to entice me, I tried Grimmwood’s blitz mode. This was basically the same concept as the original mode, but instead, the game day lasts just fifteen minutes. The makes the game seem like a much more standard RPG, which allows you to appreciate the nature of the game more than in the standard mode. Here your SP regenerates faster and you’re able to achieve more. I certainly prefer blitz mode due to it’s faster pace and lower investment.

However, I was still unable to get past day three by myself, so you will need ten friends who are also willing to play the game with you. (I’m not going to dive into “gamers have no friends” jokes, but it does feel like this game expects you to have high volumes of people who all have the same schedule as you do and want to play the same game just as much as you.) Perhaps in Blitz mode, each player could control two or three characters, to set at various different tasks. They could get hungry/thirsty less easily, and in turn become more easily overfed.

I feel like this is the best time to throw into a small issue I have with the game, which is that the notice you get warning you of death when you elect to defend the village is completely pointless. I set a character to hide during the invasion and he died just the same, with the same message as a character who died defending the village. I’m not complaining that they died, but if the risk of death exists either way, even if it’s higher as a defender, what’s the point of warning about it in one mode? 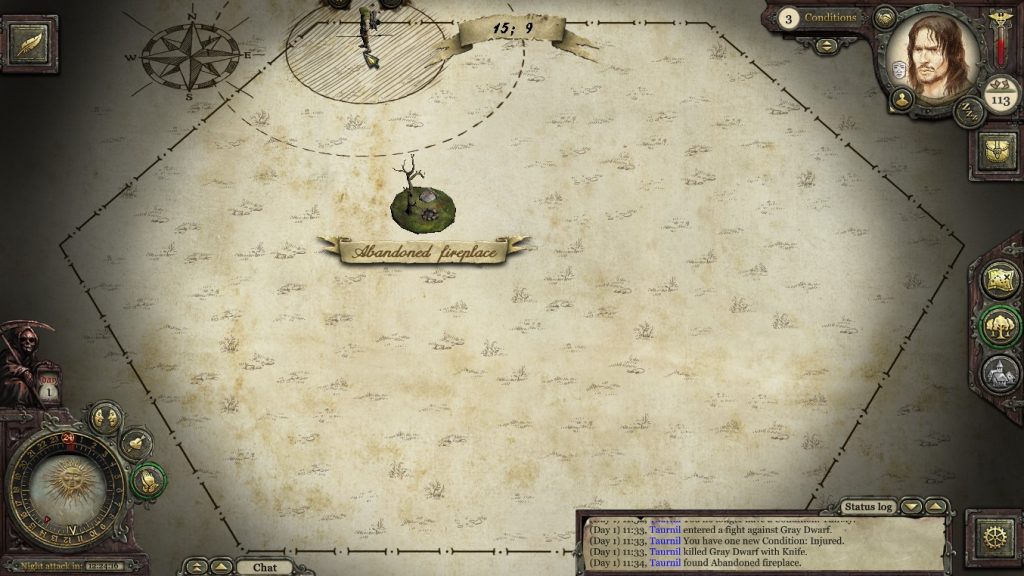 In order to gather the resources needed to defend the village, you must leave the village and wander out into the forest. This was perhaps my favourite part of the game, as there is plenty to explore and the game world expands as you explore. You can also encounter enemies which you will have to defeat in order to progress. There was something very satisfying about wandering through the wilderness, working your character half to death and finally coming across what you were looking for. At least Grimmwood understands the value of hard work.

If you don’t have enough SP to get back to the village before the monsters come, you can set up camp in the forest. This does, however, make you more vulnerable to attack, but there is equipment that you can craft to increase your chances.

My only real complaint about the exploring part of the game is that searching an area can get very tedious. Each area contains a certain number of things to find. The player finds them by clicking on a spot in the area and searching it for three SP. If you don’t find anything, you basically have to wander around the area clicking and spending SP points until you do find something. If you fail there are no hints to say that you’re in the right direction, you just have to keep trying which takes time and SP points that are very precious in the game. I would be better if you had the option to, say spend fifteen SP to search the whole square. Finding them individually might save SP, but the other option would save time and allow players to achieve more.

Judge a Game by its Cover 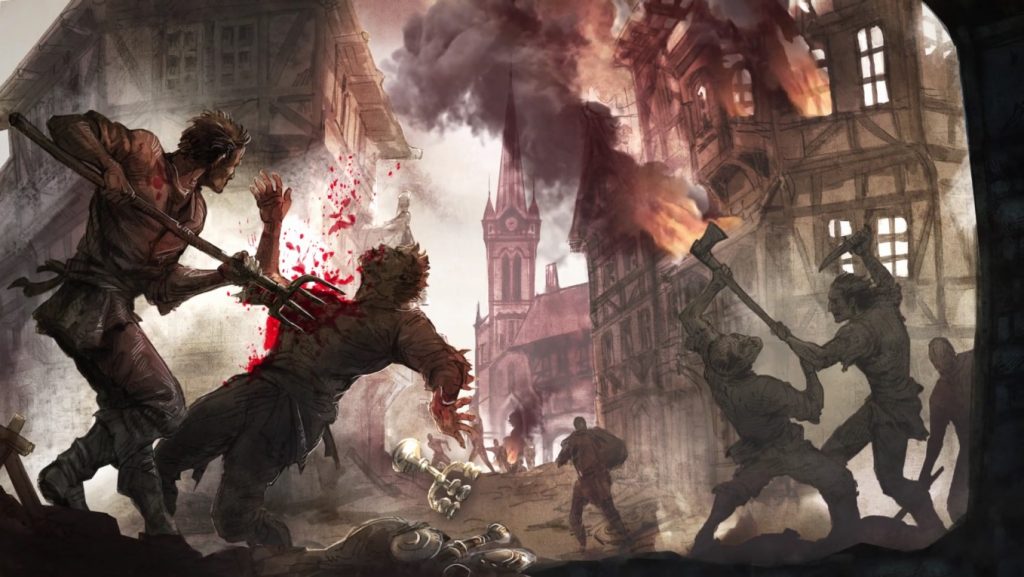 I hate to say it, but I was a little disappointed that you don’t get to see a lot of actual gore in Grimmwood. When you load the game, it’s got this beautiful gothic art style and the promises of death and war. The intro cutscene is filled with gory imagery of people being slaughtered and rats eating each other. But there is very little of that in the actual game. You don’t get to see anyone being slaughtered, rotting or any creepy monsters.

In my experience, beautifully drawn but dark indie games love to show you as dark images as possible. It’s one of the things I love about them! Yes, it all looks cool, but it also makes things more interesting and motivates the player to carry on. Perhaps after each of my solo-blitz villages had been destroyed, I could be forced to watch a video of children and innocent people being thrown into a fire by dark inhuman creatures. Or see my characters head on a spike! I might have had more motivation to push forward.

Yes, I understand that this takes time and money, but the pay off is always worth it! It doesn’t have to be as I have just described. But it would have been nice to see some more gore in the actual game.

Fight Side by Side With Strangers 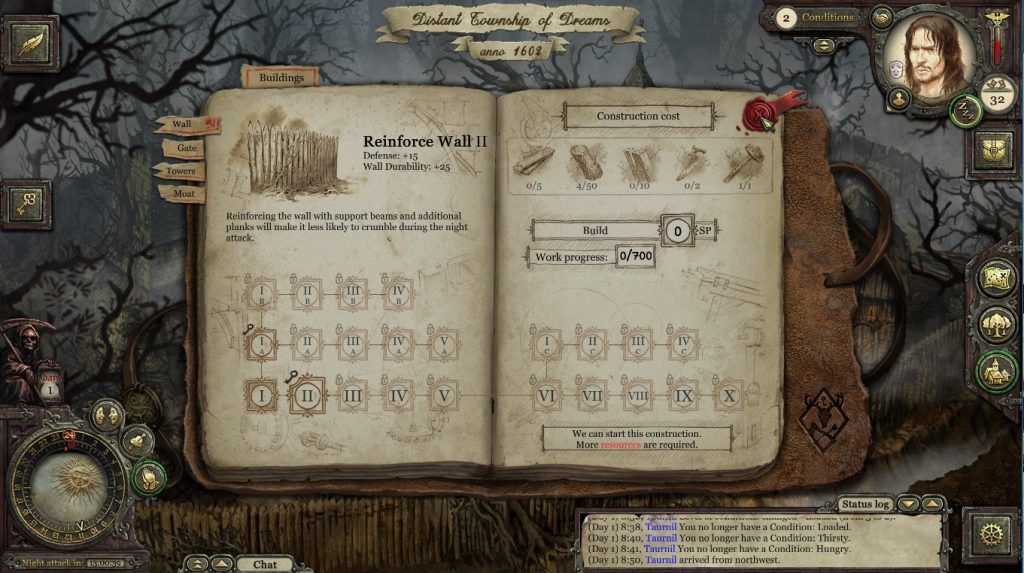 I will say that I played the game again this morning with actual people, and yes, the game made a lot more sense and a lot more got done. However, now it seemed a little too easy! The village had literally twice the defence of the attacking monsters. I loaded the game, went away for an hour, then came back to check and a whole ten points had been added to the defence. The stockroom was filled with useful items and everyone was using their SP on what was needed at the time. Even if the monsters get more dangerous as time goes on, if everyone sticks with this game the defence is going to keep growing and the monsters might as well find a new hobby.

This again could be improved if difficulty was tailored to the number of people who were actually playing the game.

As I said at the beginning, Grimmwood is a really unique concept and I haven’t lost faith in it. It’s a wonderful idea that is still being improved upon, so I hope that the creators address some of these issues in future to create a better experience for players. I don’t hate the game, there are just a lot of issues that are standing in the way of the fun right now. Right now, I’d honestly say it feels rather unbalanced and at times dull.

Full disclosure: This review is based on a review copy of Grimmwood given to Hey Poor Player by the publisher 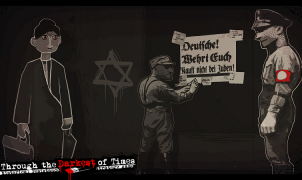 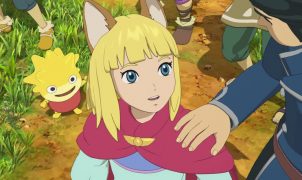