B is for Butch 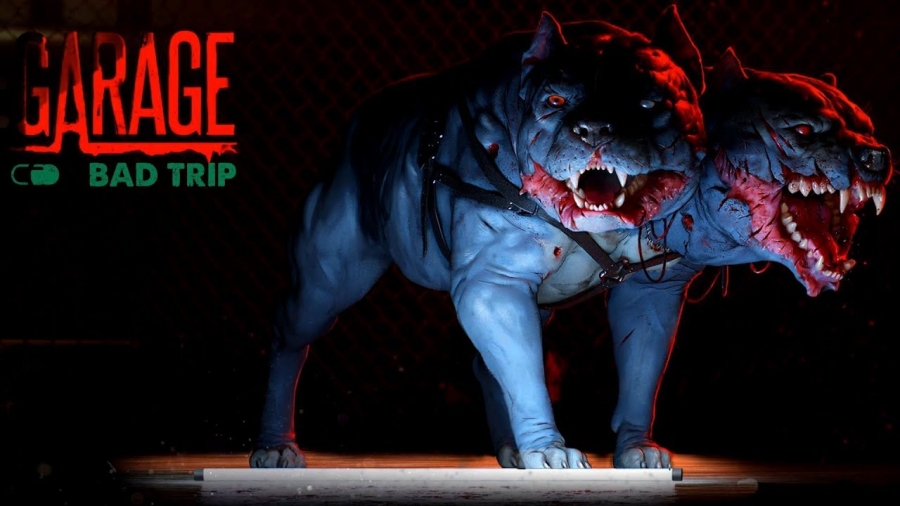 Gratuitous blood. Shock-inducing gore. Terrible acting. Shoddy camerawork. A plot filled enough cheese to endanger your arteries. Alone, these phrases might not mean much. However, if you take a step back and look at them all together, you’ll notice something; they’re all vital parts of the wonderfully terrible “horror B-movie”. Say what you will about B-movies, but I respect them. Yes, they’re bad. And sure, almost all of them end up trying so hard that they end up being kind of funny. But that’s all part of their charm. While they may be largely gone in terms of actual production, they’re far from being forgotten. Even today, the spirit of the comically disguising B-movie lives on — and it’s that very same spirit which ends up being the driving force behind Garage: Bad Trip.

In all honesty, Garage: Bad Trip emulates the spirit of the horror B-movie incredibly well (which is good, because that’s what it’s trying to do). It’s got a gritty, overly serious, and somewhat ham-fisted plot, it looks, and at times even plays, like it was cheaply made, and it somehow manages to take itself seriously while simultaneously not caring about anything at all. Yet, even after all of that, it’s still fun. In fact, I’d even argue that part of the reason why it’s fun is because of those oh-so-carefully mimicked B-movie qualities. After all, who doesn’t like a good low-budget thrill from time to time?

Save the World, Get the Girl (and Also Probably do a Lot of Drugs) 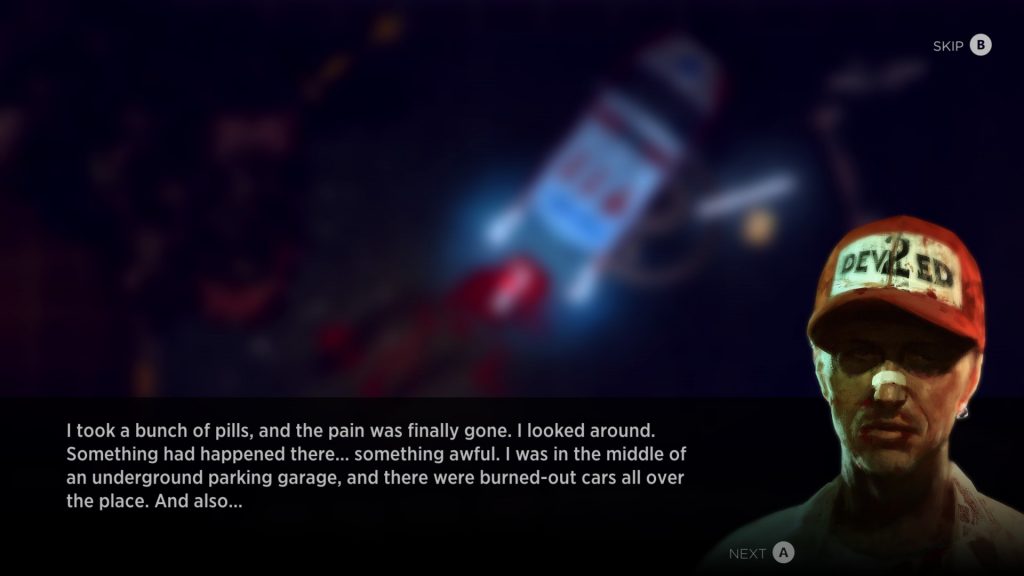 There’s a literal zombie apocalypse going on. What harm could a few measly pills do?

If there’s one thing that B-movies do right, it’s mediocrity. And that’s great, because that’s the perfect word to describe this game’s protagonist. Rather than giving us a dashing hero, filled with potential and lovingly guided by destiny, Garage: Bad Trip gives us Butch; a dim-witted drug dealer (excuse me, ex-drug dealer) who, after crawling out of the trunk of a car and popping a bunch of pills that he found laying around, ends up locked inside of a garage. A very big garage. Not exactly what I’d call a great start. But it only gets worse. From there, Butch finds himself forcibly thrust into the midst of a battle against not only zombies, but the military as well. Oh, and on top of all of that, Butch is eventually contacted by a mysterious woman, who’s also probably totally hot, who basically orders him to come rescue her. Talk about going from zero to hero, eh?

All-in-all, Garage‘s story is fairly campy. And that’s great, because campy is exactly what you would expect from a game like this. It also, however, does a good job of avoiding going “full-blown cheese”. Despite how predictable a lot of Garage‘s story and setting are, it does have some genuinely creepy moments. Be it the eerily detailed ramblings of a certain psychotic doctor, some of the game’s more bizarre creatures that you run into (like two-headed dogs, and fat, puss-filled zombie chefs), or even the occasional jump scare, Garage not only attempts to infuse a bit of genuine horror into it, but ultimately succeeds in doing so.

Ex-Dealers Beware, You’re in for a Scare! 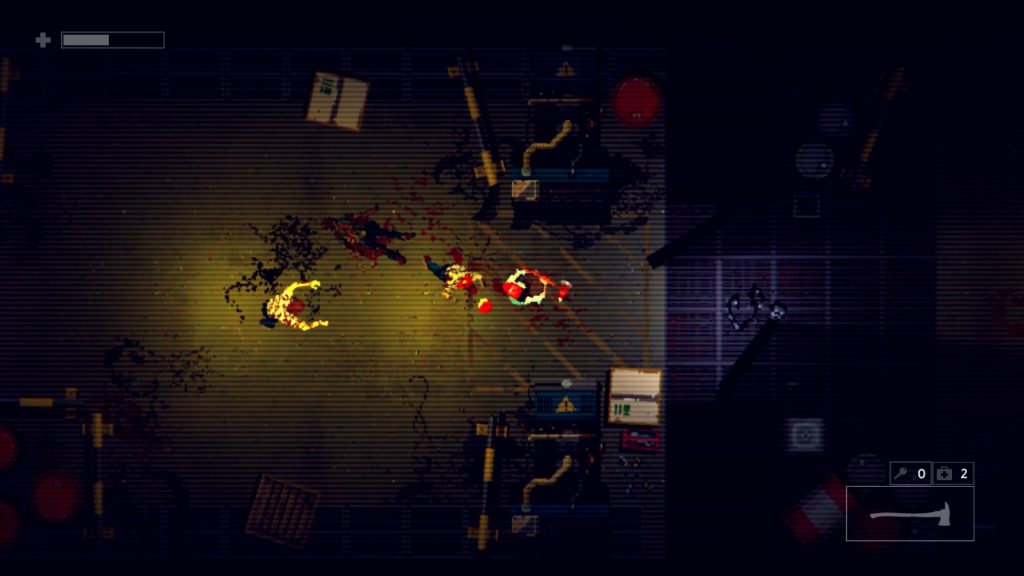 Cut ’em down to size, Butch!

At first glance, Garage: Bad Trip appears to be your average twin stick shooter. And that’s because, from a mechanical standpoint, it is. Mostly, anyway. By and large, Garage‘s gameplay focuses on arcade-like, top-down shooting action, focused primarily on avoiding being torn limb-from-limb by blood-thirsty zombies. And, later on, being torn limb-from-limb by blood-thirsty military personnel. Like any good twin stick shooter, players will come across a variety of weapons along the way — featuring such classics as the fire axe *Ooo!*, the pistol *Ahh!*, and the shotgun *Wow!*. One nice thing about Garage is the fact that it avoids making weapons obsolete. Rather than simply becoming stronger, Garage‘s enemies become more diverse. This leads to players encountering a variety of combat situations as they delve deeper into Butch’s nightmarish journey which, in turn, require various weapons. This in and of itself isn’t anything especially groundbreaking, but small touches still make a better big picture overall — even if the big picture looks like it’s being viewed on an early 80s CRT TV (which was obviously intentional).

Unfortunately, while I did appreciate Garage switching things up as best it could, I couldn’t help but notice that sometimes said diversity lead to some rather frustrating situations. I remember one instance, for example, where the player was attacked by several “segments” of a previous boss known as the “centipede” (I’m sure you know what that’s a reference to). During the boss battle the player was given plenty of room to move around, which is good because these suckers are fast. During their “resurgence” as a normal enemy, however, the game wasn’t quite as liberal with space, and this lead to them quickly backing me into a corner and killing me over, and over again. I ultimately ended up getting past that by taking potshot at an offscreen explosive barrel, hitting it, and killing one of them before they could even get to me. That was great and all, but it really shouldn’t have come to that. I’m totally okay with this game being difficult, but it’s always good to keep in mind that “difficult” doesn’t necessarily need to equate to “unfair”. 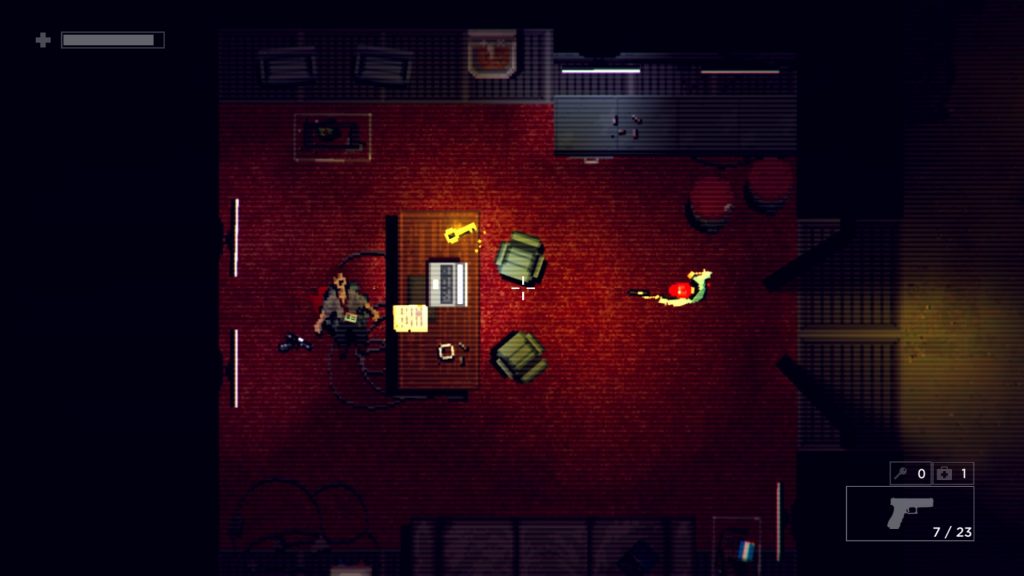 Something about this room seems off, but I can’t quite put my finger on it…

Of course, I can’t forget to mention the “survival horror” aspects of this game either. While nowhere near the likes of Resident Evil or Silent Hill, Garage does undoubtedly attempt to fuse a tiny bit of the survival horror genre into its own gameplay in the same way that it infuses horror into the overall atmosphere. Resources, especially those of the ammunition variety, aren’t exactly what you’d call abundant. While I never found my health and ammo reserves reaching critically low levels so long as I played carefully, I won’t say that it’s impossible to run out. As obvious as it might sound, accuracy is incredibly important. It’s fine to miss the occasional shot or two (who doesn‘t?), but sloppy marksmanship will have you backed into a corner pretty quickly (both metaphorically and literally). Garage does a nice job overall of making sure that resources are just scarce enough to keep you on your toes, but never so much that you’ll find yourself up a zombie-filled creek without a bullet-shaped paddle. 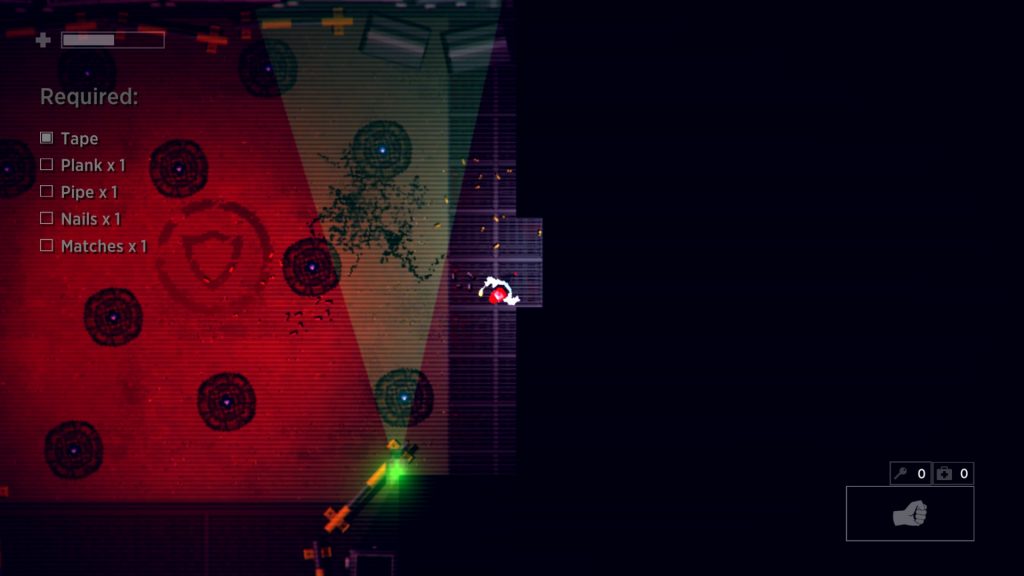 Credit where it’s due; I was not expecting an extended stealth segment in this game.

Another thing that works in Garage‘s favor is the fact that it mixes things up on occasion. Sprinkled throughout its gratuitous and gory twin-stick shooter gameplay are a number of unique sections which help to break up the potential tedium which might or might not have occurred otherwise. While most of these changes are relatively simple, such as the zombified Missile Command section, or that one part in the beginning of the game where everything looked weird because Butch was tripping out from taking a bunch of pills, other parts are more fleshed out. The best example of this is the stealth section that occurs later on in the game which, despite being a tad on the frustrating side, is well done. There’s also a short motorcycle section near the beginning of the game which, while once again is not bad, feels very randomly placed. In fairness, none of these extra things that Garage added in were necessary by any means. And I could see people potentially getting frustrated with them. Still, if you ask me, Garage‘s decision to spice things up was a good one overall.

Like the B-horror movies which it so vehemently emulates, Garage: Bad Trip most likely won’t be winning any major awards. But that doesn’t stop it from being enjoyable for what it is; a weird, slightly scary, and sometimes funny classically inspired twin stick shooter. If you’re looking for something to help pass the time and are up for a bit of a challenge, picking up Garage might not be a bad idea. Just remember that there’s no escaping the Garage once you’ve entered! …Unless you, you know, quit the game or something.

Full disclosure: This review is based on a copy of Garage: Bad Trip given to Hey Poor Player by the publisher.