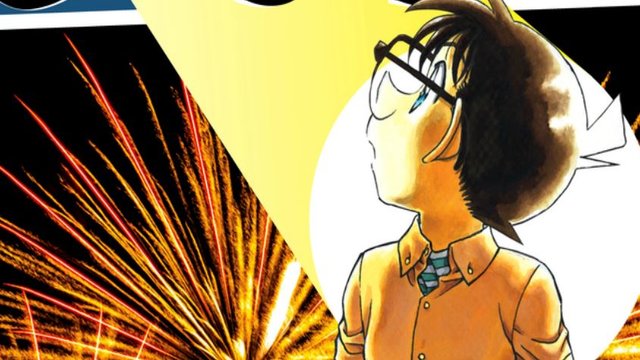 Case Closed returns with another four-mystery volume, tackling murder, suicide attempts, department store bombings, and romantic comedy hijinks — well, okay, that last one ties into murder, too, but leave it to Gosho Aoyama’s endearing cast to invest us more in their love lives than them being targeted for murder. Regardless, as we elaborated before with Volume 65, four-case volumes are always a treat, with Volume 67 being yet another successful whopper in each case being better than the last.

We begin with a murder case picking up from the last volume, wherein a girl wearing Gothic Lolita was found strangled in a public restroom – with the only suspect being a “friend” waiting for her, it’s up to Conan and us readers to figure out how she pulled it off. The case’s brevity – including last volume’s cliffhanger, it’s only three chapters – speaks to Case Closed’s wisdom in its pacing: with the culprit evident, these cases know never to linger too long, focusing on Conan’s detective-work rather than “character of the day(s)” we’ll never see again. (Admittedly, this leads to the volume’s only fault in the cliché motive; I mean, forget Case Closed, how many times have you heard “argh she stole my boyfriend!”?)

Perhaps that’s why I found the following case more interesting; after all, it only lasted one chapter. To my memory, this was only attempted once before, and that was such a long time ago I’m surprised Aoyama went with it again. Without giving anything away, aside from being an uplifting little side-story, it’s more interesting than the previous iteration for one reason: it ties into not merely the next case, but the main story itself. Granted, the link is only peripheral, yet it’s one that immediately grabs our attention: Shuichi Akai. Having learned in Volume 65 that he’s (obviously) not dead, we’re instantly reminded here in that wherever he goes, the Men in Black are never far behind; naturally, what ensues is a high-stakes department store bomb case.

While hardly the first time Conan’s dealt with a ticking explosive — readers will certainly recall the Touto Tower incident — this is the first one I can recall that directly ties into his relation with the Men in Black and the FBI. Only one unavoidable instance of a Hiragana clue impedes us English-speaking readers, but it doesn’t matter: with Jodie Starling on the hunt for Akai, the Men in Black  at each other’s throats, Bourbon snooping to an unknown agenda, and an Aoyama-patented criminal fake-out putting the cherry on top, it’s a page-turning case that grips us from the get-go. As typical of Case Closed, not every mystery is solved, but our attention is assured thanks to Aoyama’s careful balancing: despite the revolving cast, Conan and Jodie handle their respective goals (the bomb and Akai) until they intertwine at the very end. 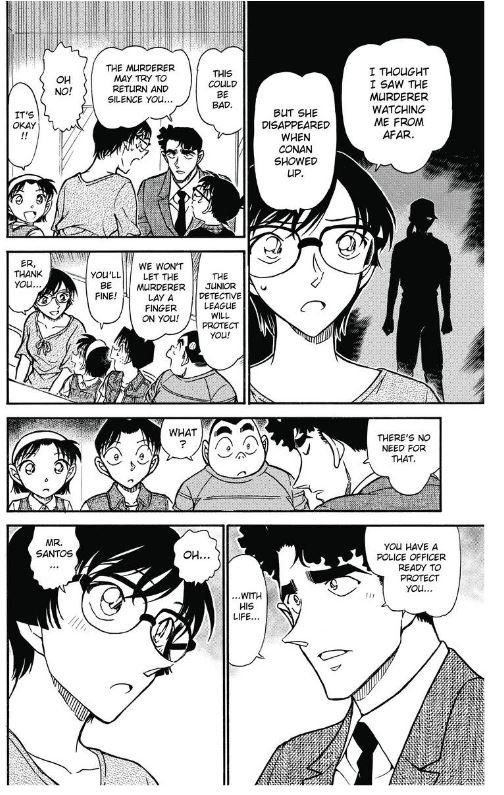 Despite the bomb case’s thrills, however, the volume ends with my personal favorite of the four: wherein Detective Santos’s blooming romance with Ms. Kobayashi, Conan and co.’s teacher, is imperiled by the latter’s witnessing of a murder. As it happens, Kobayashi hasn’t pieced together her childhood connection to the pompous detective, and her striking similarity to a certain other cop has put their budding relationship in peril – could a misunderstanding end this love before it even begins?

We readers already know the answer, but the point is, these character-focused cases end up always being my favorites, all owing just to how lovable Aoyama’s characters are. I say that in spite of our shock that we’re finally rooting for Santos, yet Kobayashi recognizing she has a doppelganger in Detective Sato — Santos’s former crush, need I remind you — and the inevitable frictions that follows borders on a rom-com scandal. It’s enough to make her aforementioned murder-witnessing an afterthought not just for the two lovebirds, but for us readers: yes, the cloaked suspect’s volume-ending glare is certainly a threat, but already we’re wrapped up in this dysfunctional couple as we already were with Rachel’s estranged parents, and my poor heart simply can’t take knowing I’ll have wait until October to find out how they kiss and make up.

Yes, that’s right, the next volume: I’m not exaggerating when I say I let out an “AWWWWWWW!” when I realized volume 67 would end on another cliffhanger. And yet, like the sucker I am, we already await the next volume with bated breath. Just like the previous 66 volumes, the never-ending cycle of Case Closed continues refuses to let go, knowing we’ll buy volume after volume, read through case after case, even if Conan never gets any closer to taking down the Men in Back and getting his real body back. And god bless it for that: after over a decade’s time, do I really want it to end?

This was based on a review copy provided by VIZ Media. 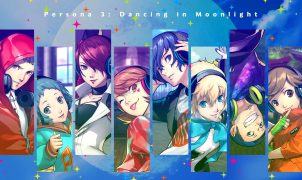