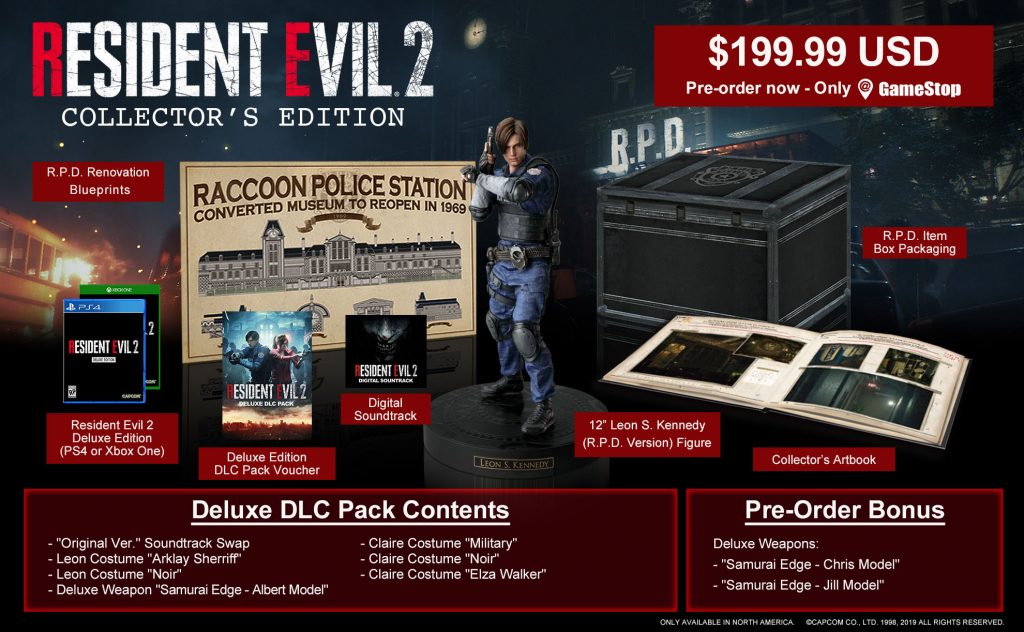 Among the wave of new titles revealed from this year’s E3, Resident Evil 2 was my personal standout from the bunch.  It’s a title that I hold dear, and seeing the demo of the remake play out was a similar feeling to when Final Fantasy VII was finally shown to be in production (granted, this title is actually coming out in the near future).

Today at San Diego Comic Con, Capcom revealed a swath of new details about the upcoming remake releasing January 25th, 2019.  Between the discussion of numerous technical and design choices, they also revealed details on the Collector’s Edition that will release alongside the standard game.  The item will be Gamestop (EB Games for Canadian consumers) and will cost $199.99 US/$239.99 CAD. Unfortuantely this version will only be available in the US and Canada.  Fans looking to pick up the pricey collector’s edition will find the following goodies in the box once its in their hands (information taken from US Playstation Blog linked here):

That’s quite a lot of goodies!  As of now preorders are live and still available, and yours truly has one set aside for the January 2019 release.  Are you looking forward to the Resident Evil 2 Remake?  Will you be picking up this expensive piece to add to your collection? Sound off and let us know in the comments below!