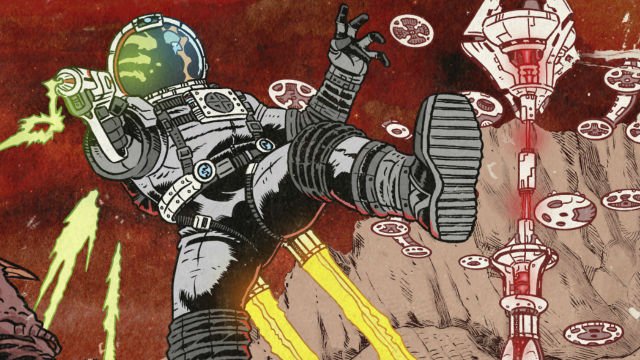 Last month, Far Cry 5’s “Hours of Darkness” DLC took us far away from Big Sky Country as we explored the sweltering jungles of Vietnam to slay some Vit-Cong as Hope County resident Wendell Redler. Now, players are poised to take the action even further away from the good ol’ U.S. of A in the game’s second DLC, Lost on Mars, releases on July 17.

Much like Far Cry 3’s beloved Blood Dragon DLC, Lost on Mars introduces a serious aesthetic overhaul to the game. Comic book-style cinematic aesthetics combine with wild alien landscapes to create an experience that looks far removed from its source material. The story begins when Far Cry 5 flyboy Nick Rye is teleported to the Red Planet to help Hurk beat back an alien invasion of Earth.

The episode introduces an arsenal of exotic alien weaponry, such as the Blaster of Disaster, Hellfire and Morphinator, as well as a new traversal tool in the form of Space Jets. Lost on Mars will also give players access to a host of fresh Mars-themed assets to use in Far Cry Arcade. These assets can also be incorporated into existing levels to give them a fresh sci-fi facelift.

One more piece of Far Cry 5 post-launch DLC content is slated to release in August in the form of  Dead Living Zombies. Set against the backdrop of one of Far Cry 5 writer-director Guy Marvel’s B-movies, the chapter promises to “pit players against hordes of the undead in a zombie-infested wasteland.”

The latest entry in Ubisoft’s long-running open-world FPS series, Far Cry 5 released on the PlayStation 4, Xbox One, and PC on March 27, 2018.