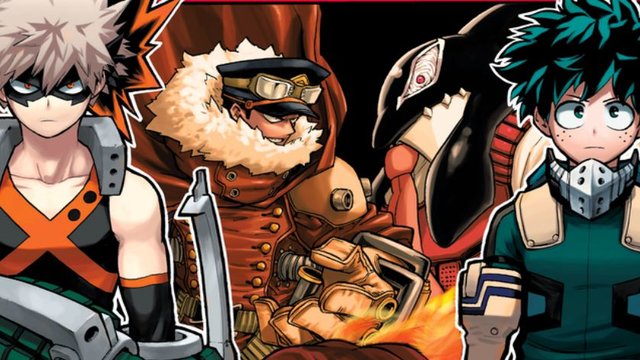 When we last left off with Kohei Horikoshi’s My Hero Academia, our young heroes had just begun the Provisional Hero License Exam to earn their temporary hero licenses, so we spend a chunk of volume 13 wrapping that up. Meanwhile: All Might’s feud with his nemesis All For One is hardly over, but can our retired hero grill anything out of the world’s most dangerous criminal? And what of Class 1-A’s top hero-in-training Katsuki Bakugo? Has his patience with protagonist Izuku “Deku” Midoriya finally run out?

As may be implied from that opener, the juicer story bits arrive at the latter half of this new volume. Indeed, the License Exam is widely considered as one of My Hero Academia‘s weaker arcs, the most common citations being the sudden introduction of a rival school (Shiketsu High School), Inasa Yoarashi’s (admittedly petty) reasoning for despising Shoto Todoroki, or just being, well, boring. I do not share these grievances: yes, it’s not the series’ most compelling moment, but that’s to be expected from a pseudo-training arc such as this. If anything, this exam reminds us hero work isn’t just solved with our fists — after all, search and rescue is a delicate process that requires teamwork and quick, careful thinking, and as we witness here, not everyone is prepared for this inevitability in their career.

So, no, I wouldn’t say it’s “boring”; however, “contrived” might be a more fitting word. Let’s put this way: yes, it makes sense for Todoroki to continue grappling with his father’s less-than-savory legacy, and how this arc presents his side of his quarrel with Yoarashi is satisfactory —  in his single-minded efforts to disown Endeavor, he cared for nothing else and ironically became the cold-blooded **ideal he hated. On the other hand, while Yoarashi’s passionate outbursts render him endearing otherwise, his motives against Todoroki feel too forced — yes, his disappointment in being snubbed by his heroes is understandable, but Horikoshi’s snappy pacing works against him here, as the matter’s resolved all too quickly. While hardly a fatal piece of storytelling, what should be a vital character growth for Todoroki instead leaves us going “well, what was that all about?”.

Still, it does successfully pave the way for the exam’s climax: not everyone makes the cut, but who is among the drop-outs may certainly be a surprise. Regardless, they are sensible choices: the individuals in question already displayed clear signs of doubting themselves, and their prominence ensures we’ll observe how they overcome their respective obstacles in time. One character already appears ready to cross that gap, but can another star student overcome his faults? 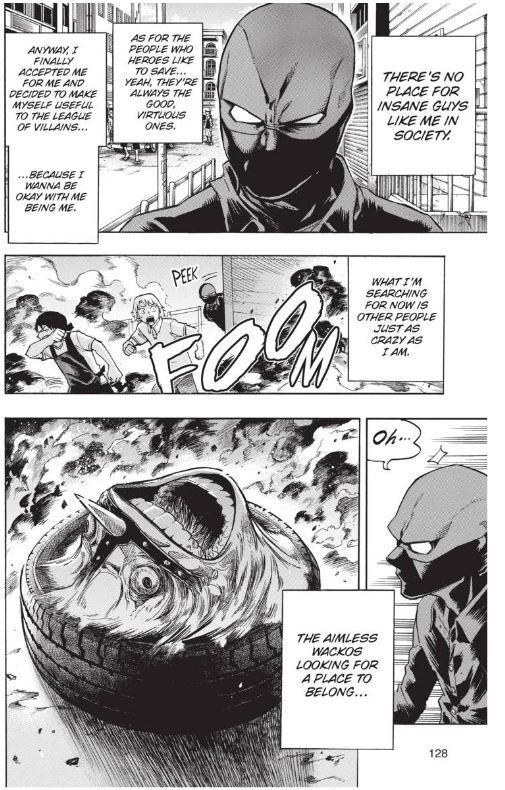 The rest of the volume gets things back on track: the series’ villains return after their absence from the previous volume, most notably in a tense confrontation between All Might and an incarcerated All For One. However, I expect readers will be more captivated by a proper introduction to that Deadpool lookalike we’ve seen lurking around before: Twice, a criminal with the Quirk of cloning anything he touches. Horikoshi’s influence from American comics was obvious from day one, but while I can hardly recall a clear-cut example such as Twice, he’s the perfect example of careful inspiration in not outright copying: just like Deadpool, he’s clearly not all there, but his split personality disorder stems from a certain incident leaving him uncertain as to whether he’s the real Twice or a double — as seen above, he apparently made peace with his existential crisis, but various clues have us believing otherwise. Instead of rolling our eyes at a lazy copycat, we’re instead drawn deeper into My Hero Academia‘s world by wondering how this dilemma will eventually play a part.

And as for the League of Villains’ failed prospective in Bakugo, his time for brooding his over. We knew he’d never join the bad guys despite his violent tendencies and teeth-gnashing personality, and all the proof we need is his volume-ending showdown with Midoriya: this is the first time in thirteen volumes he’s laid himself bare, and the guilt emerging from his jealousy of someone he once deemed inferior perhaps ties with All Might’s climatic battle as the series’ most powerful moment. Yet again, Horikoshi’s art is key, depicting Bakugo with such heart-breaking desperation and sorrow we never knew he had. As this feud pauses on a cliffhanger, we’ll be analyzing more of our favorite jerk in the next volume.

This is a bit of a scattershot volume for My Hero Academia: a storytelling exhibit of its highs and lows, if you will. However, even when factoring in a certain arc in the near future, My Hero Academia‘s worst is almost never a very bad thing — when it misses, it’s still a commendable effort; when it hits, it hits hard. This imbalance will continue to stew for the next several volumes, but Horikoshi’s themes shine through to render his work a high-class shonen.