Music to my Ears 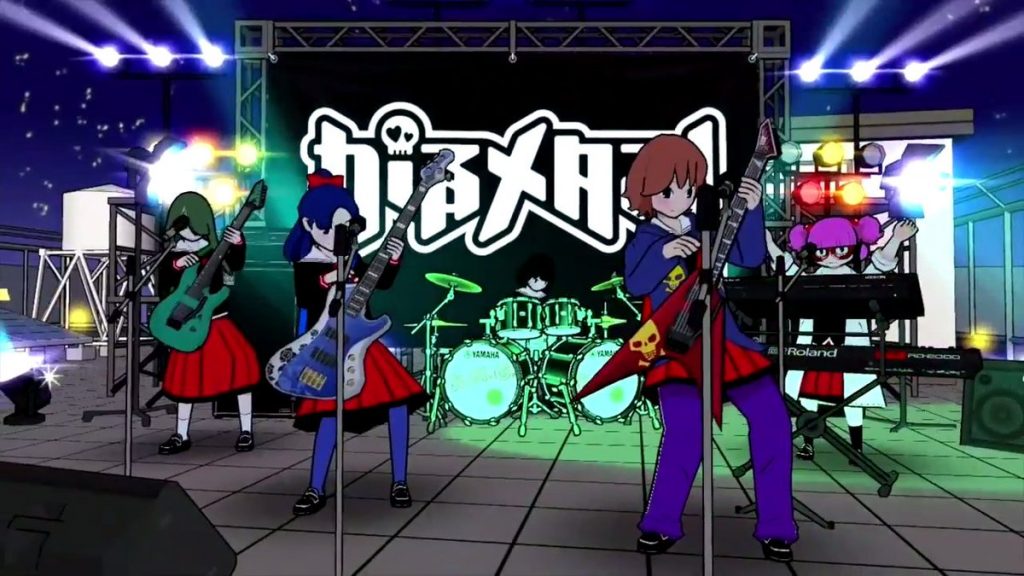 It’s no secret I am very heavily into the video game music scene. Well, not “into” as in I compose video game music. More like “into” as in I’m a very big fan of (and picky about) video game music. Same thing, right? Anyway, because of this, it should come as a surprise to absolutely no one that I’m also very partial to rhythm games. I mean, they’re not just video games with music in them — they’re video games about music. What’s not to love? Rhythm games have been around for a while. And, at first glance, it might seem like everything’s been done by now. Outside of actually playing an instrument, there are only so many ways to simulate making music — especially within video games. But for those of you who think that the rhythm game genre has exhausted all of its possibilities, you be wrong — especially when considering upcoming titles like Gal Metal.

Gal Metal, to be fair, doesn’t do anything so drastic as “re-defining the rhythm game genre” or some such. It’s still a rhythm game, and it’s one that also follows many traditional genre rules (I’m not even sure if you could call it a rhythm game if it didn’t), but it does so in a way that is both creative and free-flowing, while simultaneously foregoing sacrificing important things like quality or challenge. And that was precisely what ended up making it so fun when I got my chance to play it at this year’s E3. 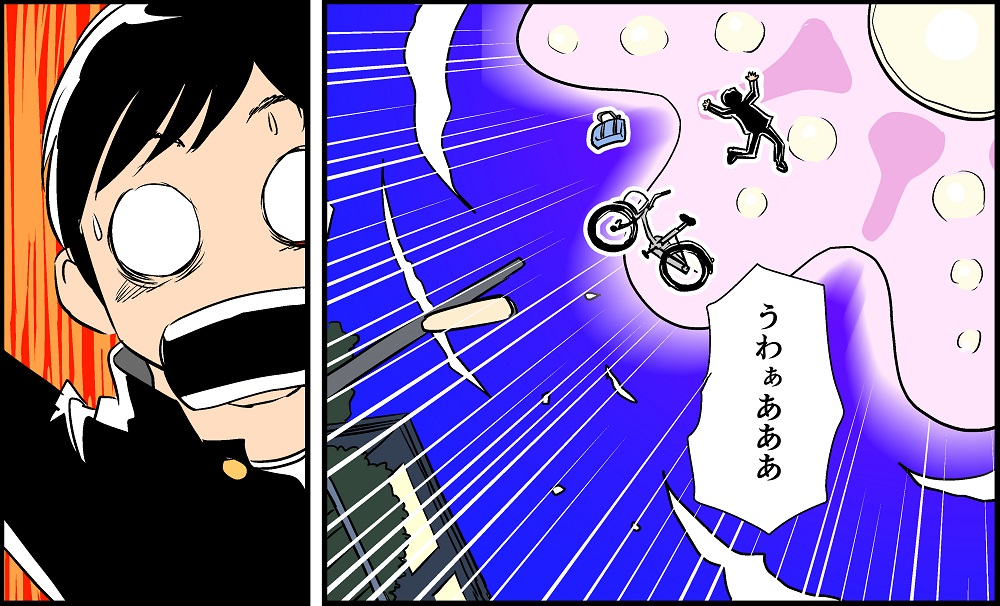 Things are only going to get weirder from here, buddy.

You know how some games get weird before you even actually start playing them? Well, Gal Metal is most definitely one of them. Before even letting you make a feeble attempt at appeasing the Gods of Metal, Gal Metal starts out with what has to be one of the most nonsensical stories I’ve ever seen in a rhythm game (and I’ve played Parappa and Um Jammer Lammy). So, what exactly happens? Well the long and short of it is that you, a regular high school boy, get abducted by aliens,  are fused together with a random high school girl so that you’re now in control of her body while she’s still able to talk to you inside of your (shared) mind, join a high school band, and use the power of music to save the world from aliens who hate heavy metal because it makes them headbang so hard that it hurts them. And that was only the prologue.

It isn’t often that I play a rhythm game to find out more about its story, but Gal Metal has definitely made it onto that list. “Saving the world with music” is be a bit of a trope to be sure, but it’s a trope that this game has pushed to an extreme that is both weird and wonderful. I may not know how this game’s story ended up like this, but there’s no denying that I want to learn more about it. 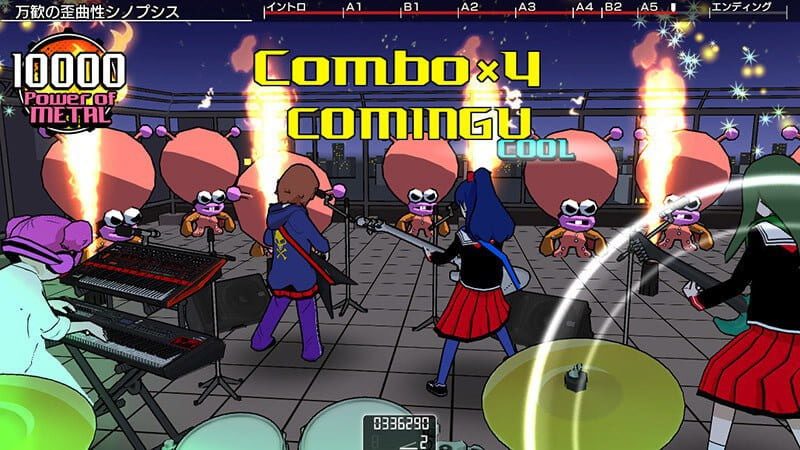 Gal Metal’s gameplay is about two things; finding your own, unique rhythm, and becoming an absolute drumming fiend in the process. Much like most other rhythm games out there, your primary objective in Gal Metal is to put on the best performance that you can. Things begin to deviate after that, though. Rather than forcing players to follow pre-set rhythms and notes, a player’s success in any given level relies entirely upon their drumming skills. That’s right, folks. The only thing that Gal Metal actually expects you to do is keep a beat. Outside of that, you’re on your own.

Truthfully, this level of freedom was actually a little intimidating when I first started playing the demo. Without being told explicitly what to do, how would I know what the “best” drumming method for the song was? Well, there was only one way to find out — with experimentation. Fortunately, it didn’t take long for me to really start getting into the groove. It’s evident from the get-go that Gal Metal is a game that wants you to have fun. It piles on massive amounts of points for even the smallest amount of creativity which, in turn, entices you to become more creative. I may have started by out merely keeping time at first, but after only a few measures into the song I was busting out flams and paradiddles like a pro, and freestyling like a true heavy metal maestro. Although I can’t say for certain just yet, it feels as though this game is going to end up being very accessible to everyone thanks to its well-implemented reliance on player creativity. 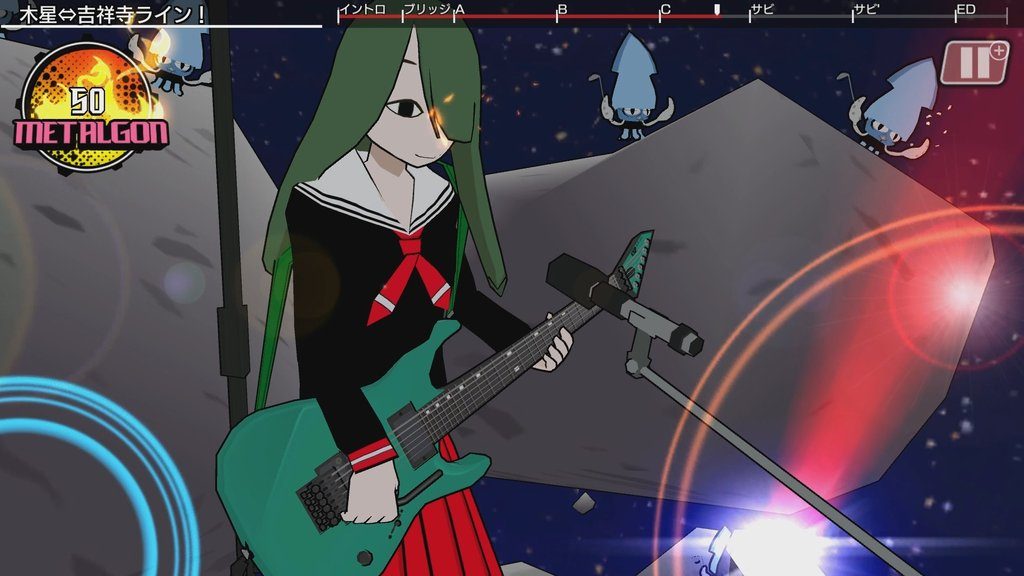 Your left and right JoyCons are the only weapons that you’ll need to fight off the alien invaders.

Gal Metal also ups the ante by turning players into real(ish) drummers via the Nintendo Switch’s JoyCons. Rather than relying on button inputs, Gal Metal requires players to turn their controllers into a pair of drumsticks as they rock out to the best of their abilities. As far as JoyCon utilization goes, this is one of the best ideas that I’ve seen yet. JoyCons are a perfect fit (both literally and figuratively) for something like this. It’s much easier to get into playing the drums when you can actually play them in one  facet or another, and the ability to use a drumming peripheral (and a responsive one at that, might I add), greatly helped to enhance my immersion while I was playing.

From what I’ve experienced thus far, Gal Metal seems to be a lot of good things all rolled into a single game. Between its wacky, over-the-top story, intuitive controls, and emphasis on musical creativity, Gal Metal is stacking up to be an out-of-this-world rhythm game. I’ve greatly enjoyed what I’ve played thus far, and I’m sure that Switch-owning music lovers will enjoy it just as much when the full game releases.