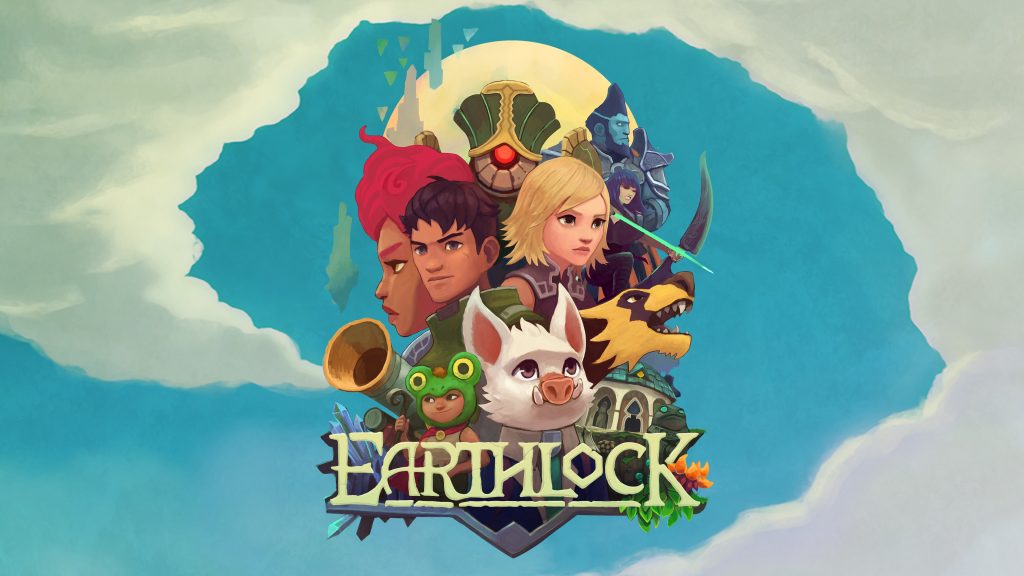 If there’s one thing that I thirst for in a JRPG, it’s that promise of adventure. You’ve got to be ready to jump into a story you know nothing about, pick up characters you’ve never met, and save a world you have no stakes in. You’ve got to trust that the game will help you fall in love along the way.

It was with this mindset that I approached Earthlock, a game from Norwegian studio Snowcastle Games. And while the game wasn’t produced by a Japanese studio, it’s certainly deserving of the title of JRPG. It’s got everything I’ve come to love about the genre, from the linear story, the turn-based combat, and the sprawling journey surrounding it.

Earthlock takes players to the mysterious land of Umbra. The story follows six player characters as they pursue their respective quests across the continent. My personal favorites include the scavenger Amon, the hogbunny Gnart, the veteran Seeker Olia, and the fledgling scout Ivory. Their paths overlap in many ways, bringing the unlikely party together. In true JRPG fashion, they soon find themselves in over their heads as they challenge cultists for the fate of their world. 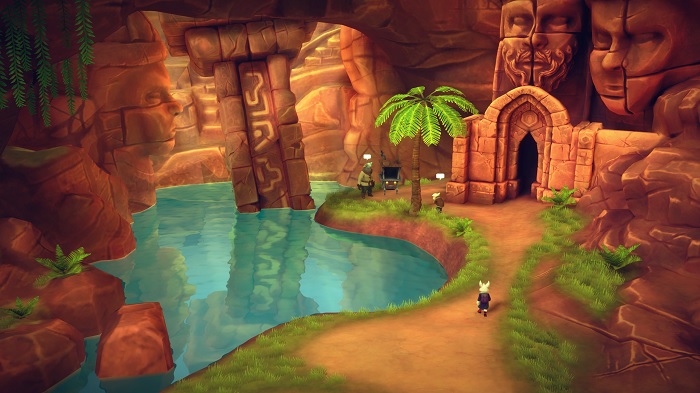 These locations are breathtaking. I audibly gasped walking into this oasis.

The first thing that struck me about Earthlock was its art direction, particularly the setting itself. Each location in Umbra is absolutely gorgeous, and the tiny details leave me wanting to explore deeper into the world. A roughed up bookshelf in a pirate-riddled villa. A withered shrine to a god long forgotten. The imagery of each new area suggests a world rife for the exploring. Unfortunately, there isn’t much to find.

While there’s a lot to look at in Earthlock, there isn’t much to do. This was most evident when I hit Suvia, the capital city. When you think of the sprawling city in a JRPG, you think many buildings. Tons of people. Multiple shops. While there were people milling about Suvia, I couldn’t speak to most of them. Even more frustrating, I could only walk into three buildings in the entire city.

It bothers me when I see papers on a table and I can’t interact with them, or if a man is lying in a hospital bed and I can’t talk to him. Why are they there? What purpose do they serve? The whole game is littered with gorgeous places to explore, and tiny details to notice. But without the ability to actually do anything with those details, the world ends up feeling kind of hollow. 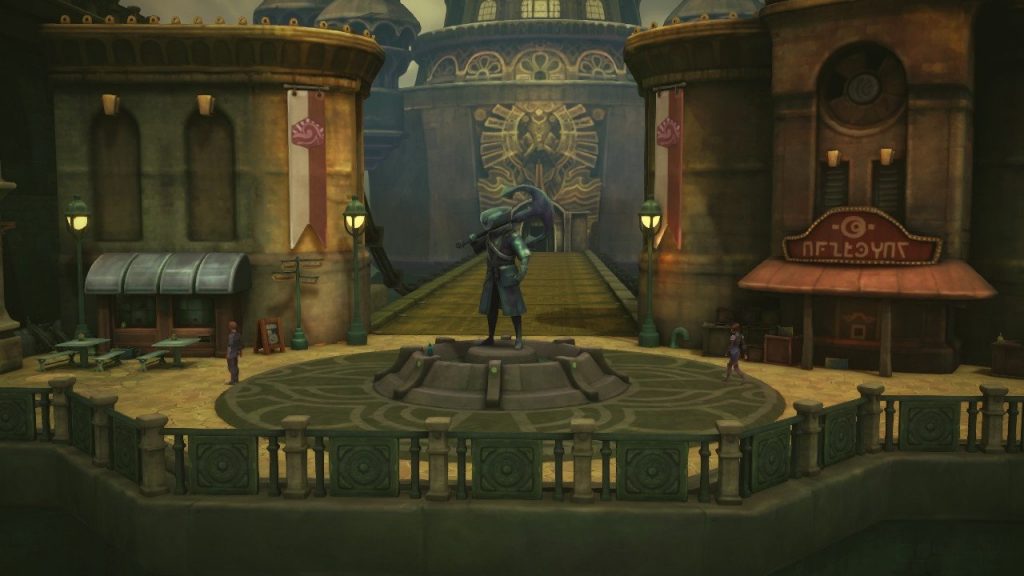 I think there are less people in Suvia’s town square than in any given Denny’s at 3AM.

The story itself is pretty standard JRPG fare, but the thing that really shines is the interaction between the characters themselves. The dialogue is charming and proves that the writers showed their characters a lot of love. When the bookish Gnart lights up at some new thing to discover, or when the loner Olia learns to trust in other people, my heart swells.

My favorite place in the game is Plumpet Island. The characters have their own remote location to serve as their home base, which is accessible from any save point in the game. Once you warp to the island, you can take care of the rote maintenance for the group: tending your garden, crafting supplies, and examining treasure maps. While it’s all pretty standard, there’s something peaceful about the island that keeps me coming back.

Also, once you’re at Plumpet Island, you can fast travel to any save point in the game. This is super convenient for jumping around the map and running fetch quests, which the game has you do often.

Because there are so many save points in the game, especially in dungeons, managing your resources never poses a challenge. Most bosses have a save point planted right in front of them, so you’re almost always hopping over to Plumpet Island to take a break before tackling a big fight. 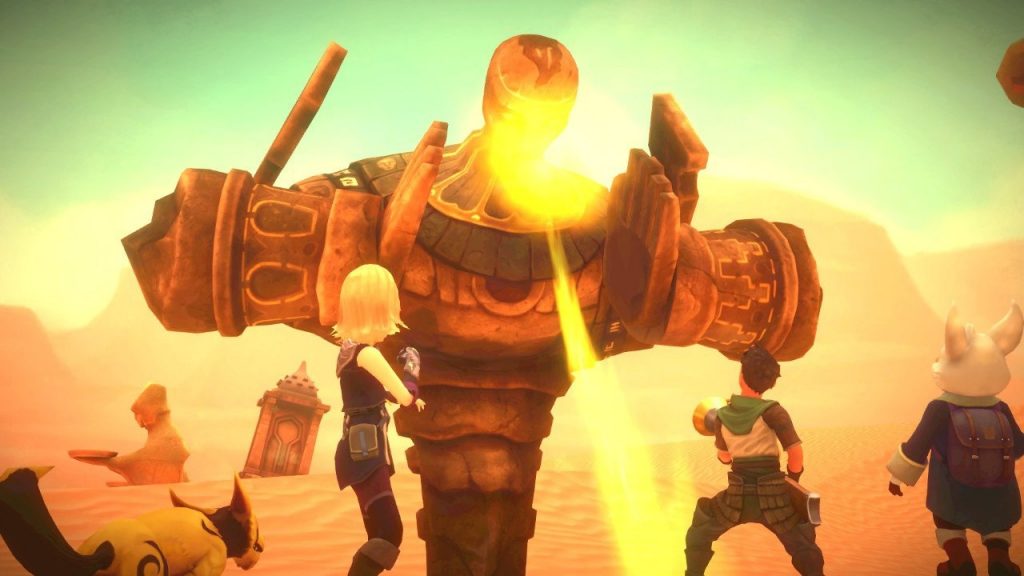 Just looking at this guy makes me want to hide away on a deserted island.

While some might find this makes the game easy, I was glad I didn’t have to focus so much on conserving my resources. It actually encouraged me to use more items.

Speaking of conserving resources, your characters only have one bar to watch: their health. There’s no mana or pp or anything that lasts between battles. The combat is turn-based, and each move uses up a certain amount of energy (known as amri). Amri replenishes little by little every turn and fully at the end of each battle. Your strategy relies heavily on timing your moves so you’re never wasting turns waiting for amri to charge.

But that also means that the best way to heal in a dungeon is to get into a fight, because casting healing magic only eats up amri, and no lasting resources. I thought this was another great way of encouraging players to actually play the game. There are people out there who don’t fight more monsters than they have to. I know you exist because I’m one of you. Earthlock solves this problem by incentivizing your battles. If you play your cards right, you’ll finish battles with more health than you started. 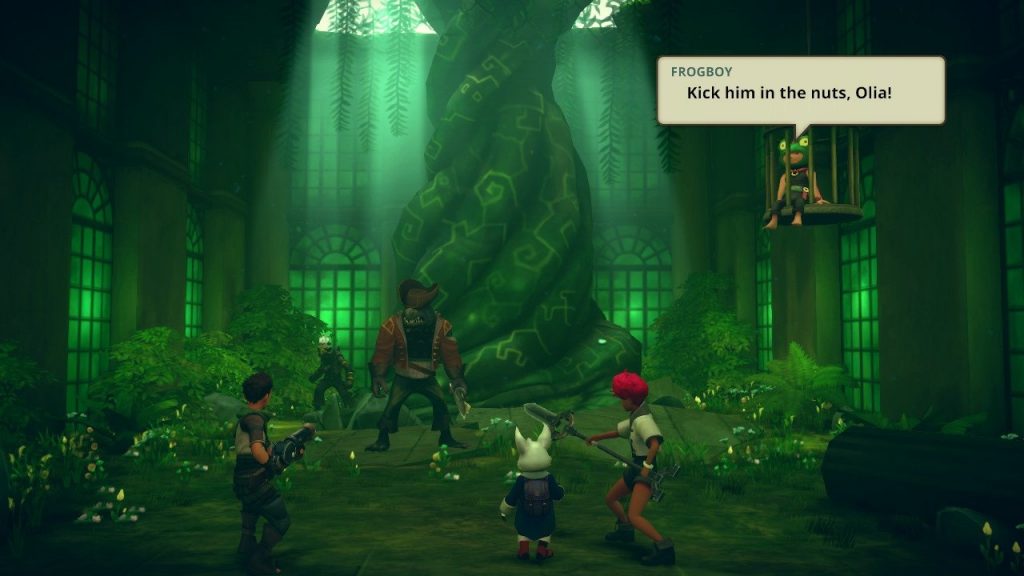 Every game should have a small child in a frog costume telling you how to fight.

There’s a lot more to combat than just worrying about amri. Each character has two modes to them, called stances. They can swap stances mid-battle, but it will cost you a turn. Some characters shoot ranged weapons. Others are dedicated healers. The most fun to use was Olia and her veteran stance. In it, she’ll counter any melee attack with an attack of her own. With six different characters and two stances to each of them, the party makeup combinations are varied, and it keeps the fights interesting.

Without having to worry about depleting resources, the dungeoneering in Earthlock then relies heavily on its puzzles. Amon possesses a bracelet that allows him to receive magical charges and then deploy them to machines to activate them. Most of the puzzles involve little more than navigating Amon to where he can charge the bracelet and then bringing him back to the machine to deliver the charge. Some levels add a twist to this mechanic. In the desert, for example, you can’t spend too much time in the sun. You’ve got to budget your movement and hustle between shady spots. 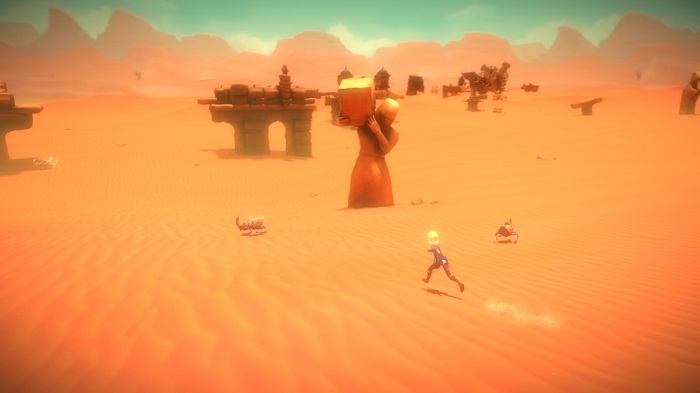 See how the corners of the screen are dark? The clock is ticking.

This was super fun until I realized I was underleveled for the boss, and I needed to retrace my steps to find monsters and get more experience. I’m not mad about the grinding; that’s an essential part of the JRPG. I’m mad that the puzzle got in the way of that. It was a great idea that just didn’t seem to fit quite right.

But the great ideas are there, and they still make Earthlock worth a look, if only to get lost in the world of Umbra for a while. I wanted a sprawling adventure, and I got one. Whether you’re a fan of the genre or looking for a place to start, you’ll get something out of Earthlock. The stuff that’s there really scratches that JRPG itch. I just wish there was more of it.

This review is based on a review copy provided by Snowcastle Games. 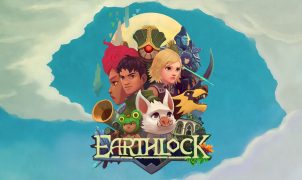 Earthlock Locks in Free Upgrade for All Players

Hero’s Hour Review: let them fight! There’s something about RPGs that just finds a way to sink their claws into us — a captivating cast of characters, a colorful…