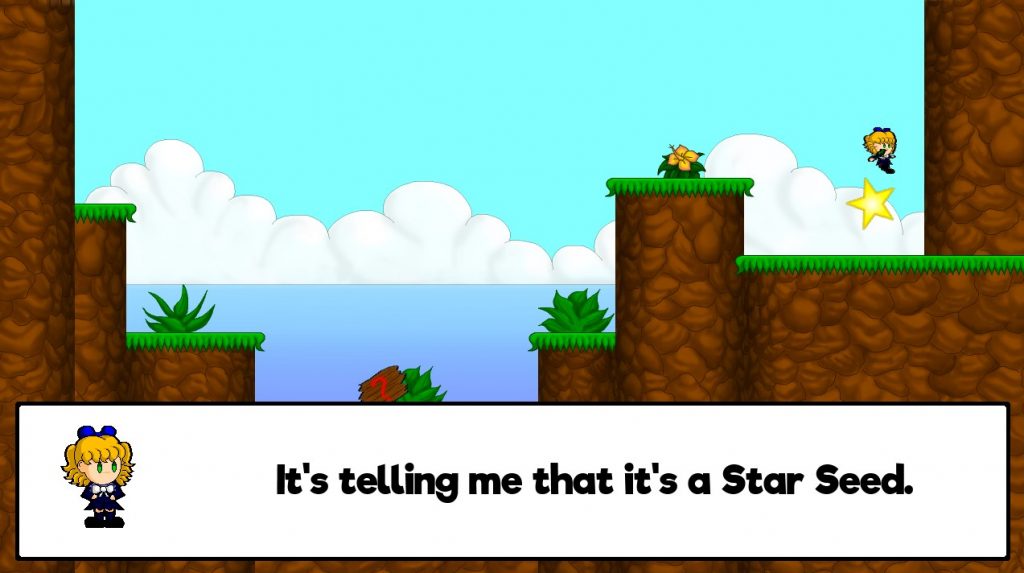 Magical Star Pillars is one of those small, indie games that give you a little shining light in humanity. So much goes wrong in today’s world and every comment section makes your shudder. But while I live in a world where someone decided to make a game about a cutesy little girl and her pet bird saving the magical star pillars to help her friend Professor Shine, I like to think there is some hope left.

Magical Star Pillars follows the adventures of Till and her little bird friend, along with a few other friends we meet along the way. After worrying about her friend who she hasn’t heard from in a while, Till follows the messages of some fallen stars who take her on a wild but cute adventure through several platform levels to save her world. Enemies include robots with angry faces, clouds and various machinery. 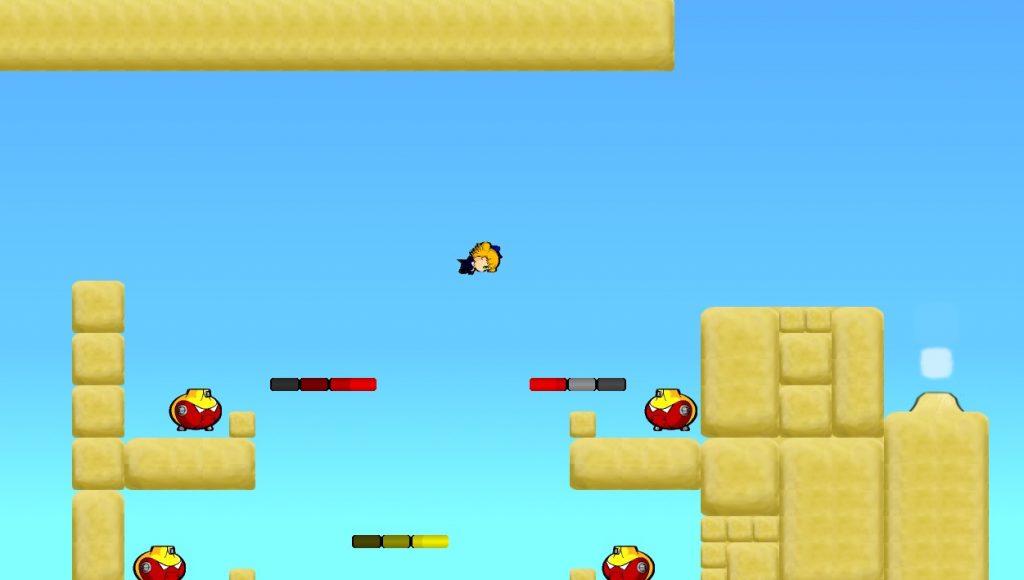 I don’t often play platformers these days- mostly because I’m pretty terrible at them. I’m too excitable, too ambitious and it often takes me several attempts. I assume this is why it took me a while to get into Magical Star Pillars. I had muddled myself before the end of the home island! Sure, most levels I breezed through, but some took me a few attempts and I often plunged down the screen failing to make a jump I was pretty sure would be easy.

It certainly helps that Magical Star Pillars is so bloody charming you can’t possibly get mad at it. So, what if you fell into the same spike pit for the fiftieth time? The game just picks you up, dusts you off and lets you have another go, cheering you on with its fun repetitive retro music. You don’t have a lives system or limited goes when playing Magical Star Pillars. You can attempt each level as many times as you like without losing game progress. That might sound boring, but the game does give you stats on each level telling you how many times you died and how many times you attempted. So, in a sense, you’re battling for your own pride and dignity- which is better motivation than limited lives!

The game includes a total of five islands. After you complete the Home Island you unlock all other islands to complete at your leisure. This made the game seem a lot more casual. You can complete them one island at a time or alternate between islands. All islands have varying difficulty, giving the player a lot of freedom. All islands off different challenges and some different enemies, so it’s cool that the player can explore that at their own pace. I will admit that each islands levels got a bit repetitive, but each island is very different from the other, with slightly different features and enemies. 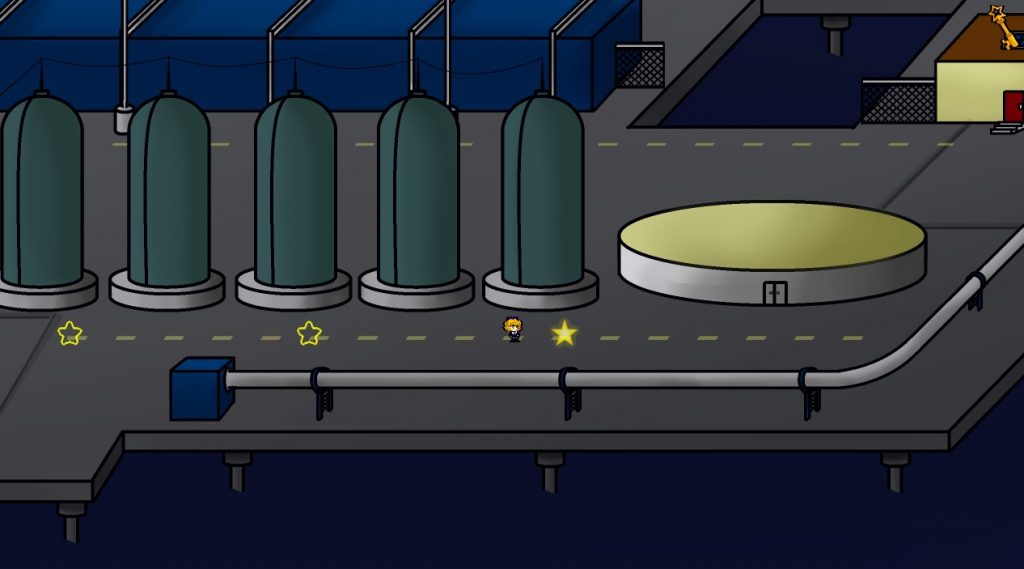 It’ll be no surprise to anyone how retro Magical Star Pillars is. The arcade-style music is incredibly fitting and I’m pretty sure you could cram this game into an arcade machine, stick it in the eighties and no-one could tell the difference. The colours, the artwork and the design of the game all seem to be designed to take the player back to the old ways of gaming. It’s another thing I find very charming about the game. While the characters can seem overly cutesy and the colours a little blinding, it’s not trying to be something it’s not. With so many games competing to be bigger, have better visuals and increased difficulty to keep up with the growing demands of the modern gamer, Magical Star Pillars is just a small project designed solely to make people happy.

It certainly doesn’t take itself too seriously. Till’s main enemies, the evil robots that wander back and forth on the levels, can be defeated by the platformers best friend – boxes!

The controls for Magical Star Pillars are pretty easy to handle. You just need your arrow keys to move and your space bar to jump. You press your shift key to pull boxes, but that’s about it. Even so, I wish the tutorial island had offered a little more direction since there were a few times where I literally wasn’t sure what I was supposed to do next. I do like that Till can send her little bird off to scout ahead so you know exactly what to expect going forward. The island maps are a little tricky to navigate, with a lot of space and a very small target, plus your character can get stuck easily. 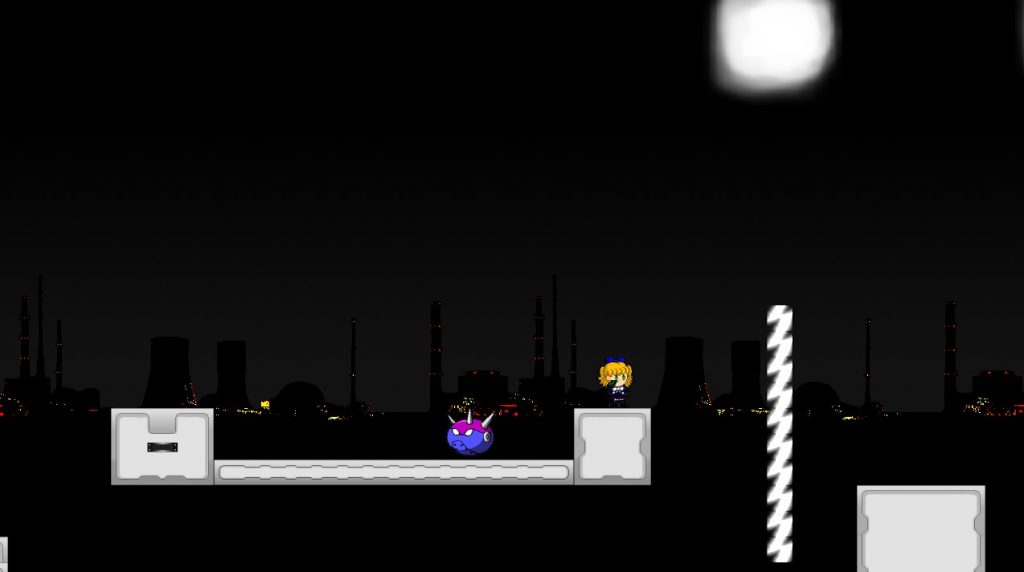 There isn’t really a lot more to say about Magical Star Pillars. It’s certainly fun! The artwork isn’t overly sophisticated, but it’s charming. The levels are varied, requiring both timing and puzzle solving from the player, even if they are a little repetitive. If you enjoy platformer games, I would recommend it, especially since it isn’t a big investment. There are games much costlier than this that offer a lot less.

Full disclosure: This review is based on a PC copy provided to Hey Poor Player by the publisher.

Dungeons and Dragons Dragon Age: Inquisition represents a return to form for Bioware. After Mass Effect 3 and Dragon Age 2 were both disappointments for a lot of people…