I’m talkin’ to the maid in the mirror… 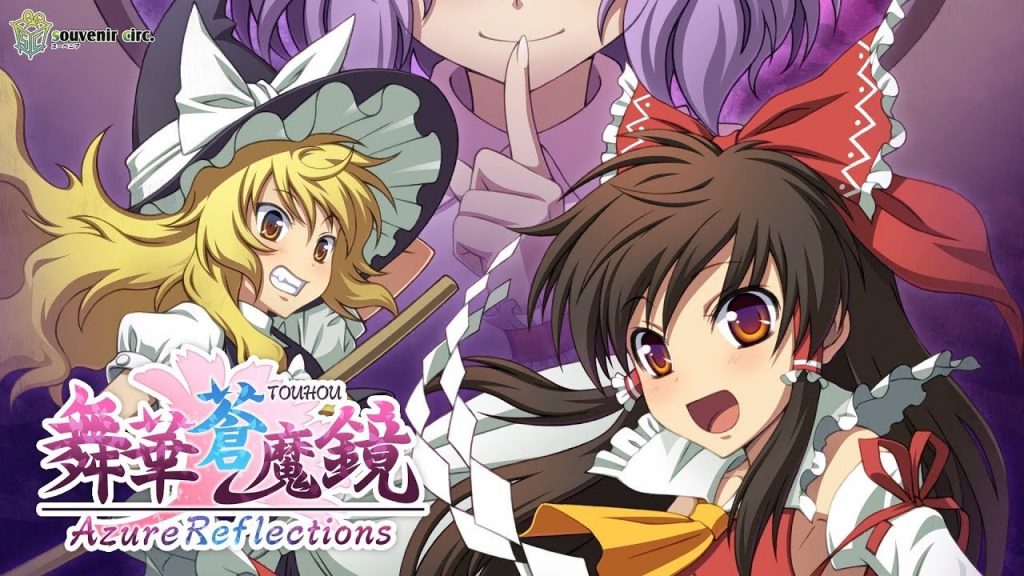 Once quite obscure in the West, the Touhou series has gained some welcome visibility outside of Japan lately thanks to publishers like NIS America and XSEED Games. Just last year we were treated to a handful of games in the franchise, including the charming bullet hell RPG Touhou: Scarlet Curiosity and the Senko no Ronde-inspired adversarial shoot ’em up Touhou Genso Rondo: Bullet Ballet, just to name a few. That said,  you’d almost need to be a danmaku-dodging legend to avoid bumping into one of Team Shanghai Alice’s line of quirky doujin shooters as of late.

With a new developer at the helm, Touhou: Azure Reflections once again gives players the chance to take to the skies and blast meddlesome yokai to kingdom come. But with so much Touhou to go around, does this bullet-filled blitz do enough to stand out from the pack? 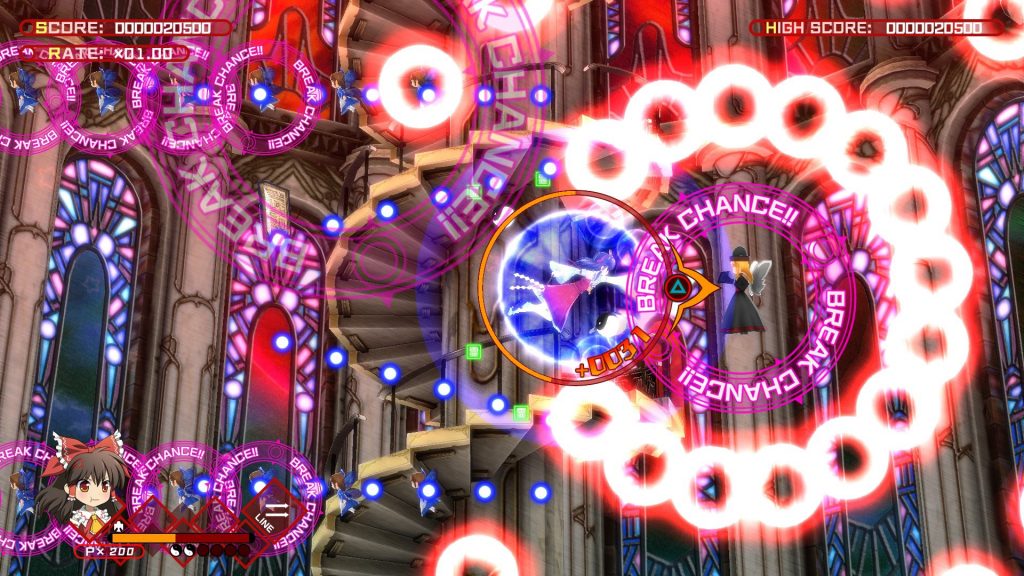 Once you have an enemy on the ropes, unleash a Danmaku Rush to clear the screen of all those magical miscreants.

Touhou: Azure Reflections marks the latest entry in the long-running franchise. However, this time around the development has been handled by indie hack-and-slasher Croixleur Sigma developer Souvenir Circ. Rather than melding genres like the past few entries in the series, this is a back-to-basics horizontal shooter in the vein of classics like Darius and Progear. That is, with a greater emphasis on the boss encounters. In every stage you play the goal is the same: beat back waves of pesky yokai, bats, and cursed grimoires to power up your shots in preparation for a challenging boss battle that awaits at the end of each area.

At the outset, you’re only able to play as the series’ plucky protagonist Reimu Hakurei. But after clearing the game and meeting certain conditions, you’ll gain the ability to choose other fan-favorite characters like the ice fairy Cirno and the treasure-loving, broom-surfing witch Marisa Kirisame. Each of these characters has their own spell cards, which act like bombs. Additionally, they have three unique shot patterns and special skills to master. For example, Marisa is able to shoot in both directions at once, making her an offensive powerhouse. Cirno, on the other hand, specializes in getting up close and personal.  I really liked how each of these characters played drastically different from one another.  Using each one efficiently requires mastery of the game’s underlying mechanics, like bullet-absorbing barriers and the Danmaku Rush, which allows you to soak up enemy bullets and deal out the accumulated damage with a devastating charge attack.

Yes, there’s quite a bit of depth packed beneath Azure Reflections’ saccharine facade. I only wish that the stages themselves managed to put it to better use.

The Stages of Depression 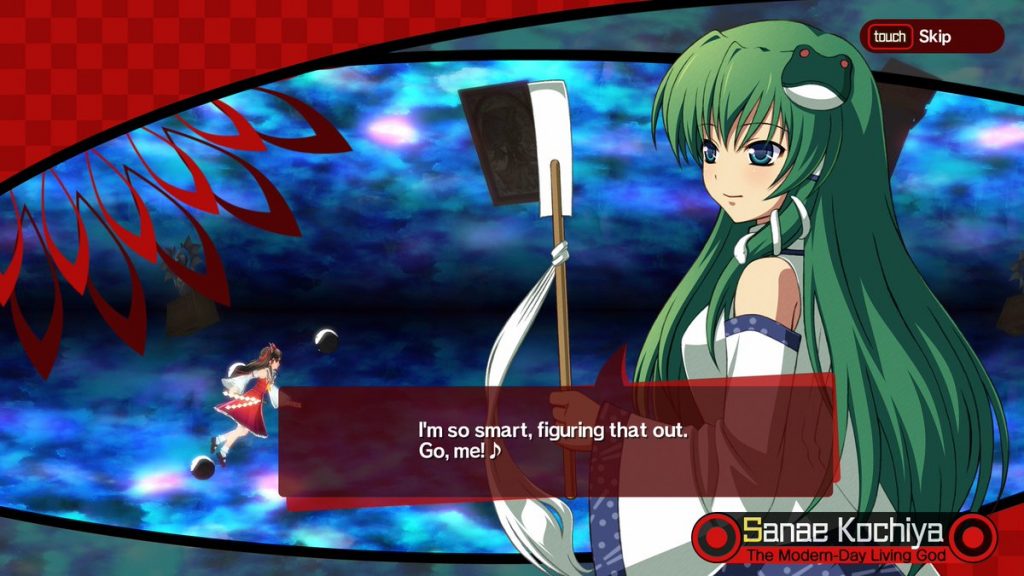 While Touhou: Azure Reflections has some fantastic boss fights, the dialog that accompanies them leaves a lot to be desired.

Here’s the deal: There are only a handful of stages to tackle. And each one of them is painfully short and forgettable, thanks to the game’s uninspired and repetitive enemy designs. Are you really into shooting pixies that look like demented Christmas tree ornaments? How about books that vomit glowing projectiles? If not, then you’re probably going to be bored to tears with enemies you’ll be facing here. To make matters worse, some stage backgrounds repeat several times over the course of the already very brief main story. Mind you, this isn’t a problem that’s unique to this offering in the series. In fact, it’s an issue that a great many Touhou games have faced since the series’ inception in 1996. Still, it’s a shame that more effort wasn’t put into making each area feel a bit more fresh and interesting.

Without a doubt, it’s abundantly clear that all of Souvenir Circ.’s effort was put into the game’s one-on-one showdowns. Thankfully, these fights are outstanding (that is, despite the bizarre and nonsensical dialog that bookends each bout). Almost every second of each fight fills the entire screen with colorful waves of pulsating bullets and flashy effects. They’re bound to put even the most grizzled bullet hell veterans to the test. This is especially true when played on the game’s harder difficulties. As entertaining as these fights are though, I really do wish there was a bit more to the stages to make them a more meaningful part of Azure Reflections’ package. Ah well, maybe next time…

Girls Just Want To Have Gun 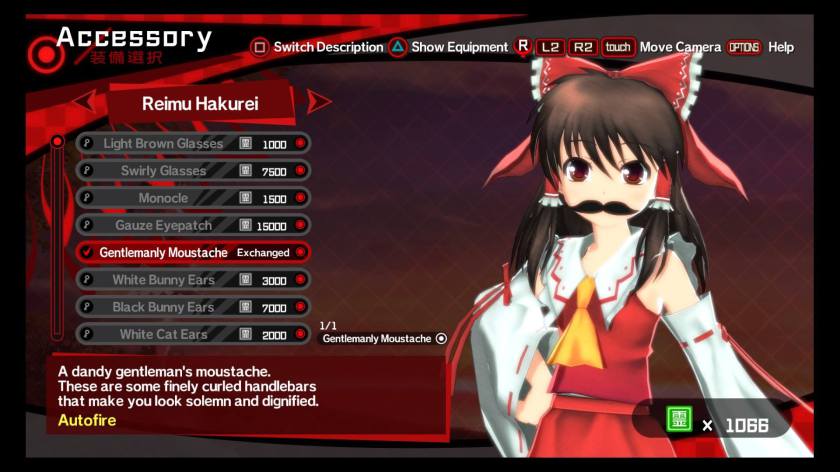 Get a load of that lip!

Despite its shortcomings, Touhou: Azure Reflections still managed to dig its hooks deep into me. Unleashing a spell card only to watch huge gobs of points and power-ups accumulate on screen is delightful. And, like any good shooter, there’s a real thrill that comes from carefully grazing your hitbox through a torrential downpour of bullets to watch your score counter climb into the stratosphere. And while the game’s visuals may seem a bit spartan in still screens, watching the more frantic fights unfold on the screen can be a flashy and borderline hypnotic experience – and a silky smooth one, at that!

Sure, climbing to the top of the leaderboards is the name of the game. But it’s not the only draw to keep playing. Blasting enemies into oblivion awards currency. You can then spend your hard-earned cash to unlock 100 different cosmetic accessories. If you’ve ever wanted to watch Reimu purge spirits with a Mario-caliber soup strainer resting upon her upper lip, now’s your chance! Feel like giving Marisa a spunky pair of bunny ears and some zany glasses while she seeks out riches in enemy-filled dimensions? Azure Reflections has you covered – so go nuts! Between the item shop, three playable characters, and three difficulty modes to master, there really is plenty of content here for completionists to lap up despite the game’s limited number of stages.

Touhou: Azure Reflections isn’t the most exciting shoot ’em up I’ve played in years. Its limited number of stages are short and often uninteresting, as are the enemies that call them home. However, the stellar boss brawls steal the show. They’re hypnotic, chaotic, and will put skills to the test. This, combined its charming cast of characters and a wealth of modes — including an excellent tutorial mode to show newbies the ropes — make for a quality bullet hell romp that’s worth at least a few loops.

Full disclosure: This review is based on a PlayStation 4 copy of Touhou: Azure Reflections provided by the publisher.

HPP reviews The Shadow You, by Topchan Games. An ambitious mix of horror, romance, and VN that falls short of success.