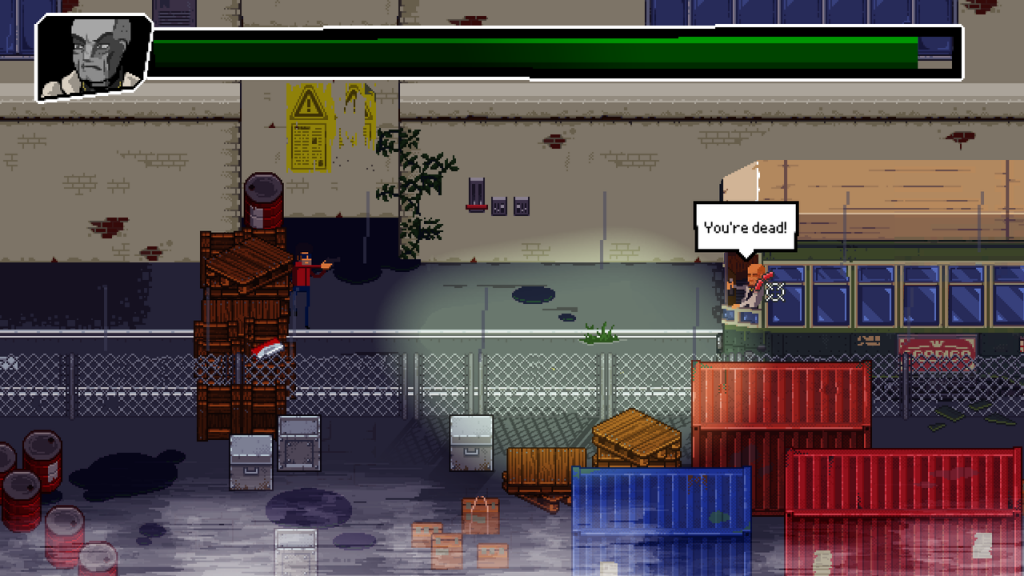 Of all the excellent sights and  sounds in the Neapolitan (Milanolitan?) arcade shoot-em-up Milanoir, it was the first mission where you infiltrate a brothel that blew me away – literally. For starters, this scene plays out with ample nudity and an incredible seedy vibe. You walk past numerous open windows and doors, seeing silhouettes engaged in any number of M-rated activities. This is stark, but nothing particularly new in the world of gaming – as you make your way to your target.

Then you get there….and a woman pops out of a bathtub just as God made her- era accurate grooming in tact, and packing heat. She got me.

I do believe it’s the first fully naked, digitized woman I’ve ever seen on a Nintendo console in 25+ years – and it was a pitch-perfect, tone-setting moment. I bring this up because the best thing Milanoir has going for it is its confidence in style, atmosphere, and vibe – all of which contribute to shocking and memorable moments and scenes like the one above.

If Lupin The 3rd and Adventure Time had a gritty 1970s mobster baby, that would be the graphical style of Milanoir – and if Tarantino was a little more grindhouse than he already is, that would be the tone. Milanoir is flat-out beautiful in the same way a really dirty Eminem song is – despite the grime, you can’t help but marvel at the technique, the colors, craftsmanship…the mastery.

If you’ve ever heard the phrase ‘every frame a painting’, you’re getting that here. For those in love with great and unique pixel art, this game is possibly one of the best ever. Milanoir is over-stuffed with visual personality, from seedy bars to street corners to train stations to the aforementioned brothel. The locations are memorable – details big and small, from side conversations to little animations that add to the mise en scène. Special note goes to the potty-related opening cinematic, which features a cute twist.

In my humble opinion, how this game delivers its visuals and music and to a lesser extent story beats, to create palpable mood and atmosphere, should be studied in schools.

Alas, the rest of the title may have to stay after for tutoring… 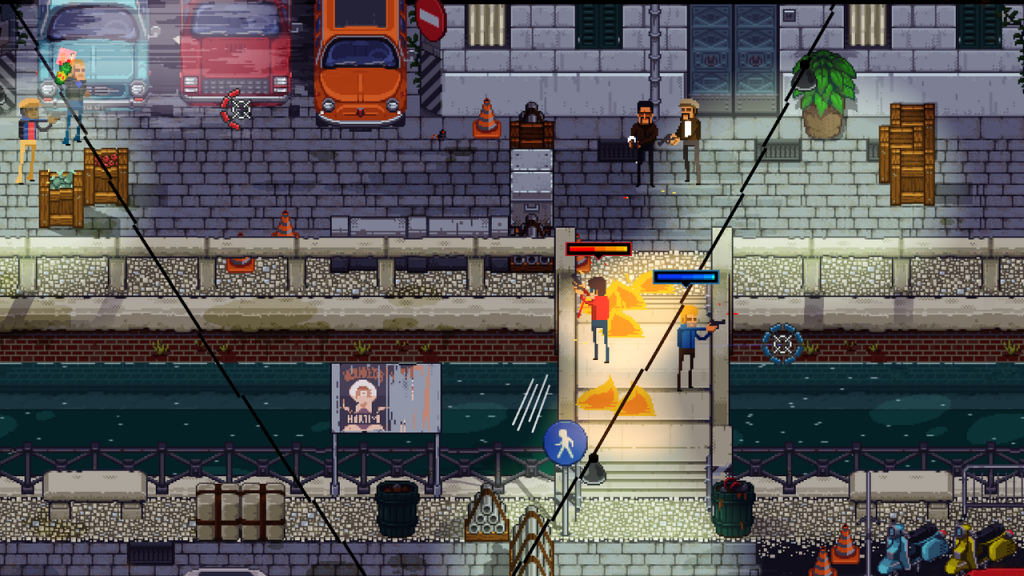 It’s sort of a shame just about the only thing you do in this beautifully realized world is murder the people in it. I wanted to play, interact, make choices. Then again, it makes sense when you consider the story. You are Piero – an ex-con with an axe to grind with the person that framed him. Throughout the 6ish hours of the story, you’ll meet up with a femme fatale, shoot (and occasionally chase) just about everything that gets in your way. All in the name of bloody vengeance.

Basic yes, but told with panache.

Alas, that vengeance comes at a heavy cost. You won’t need a therapist to explain Milanoir has major control issues. Perhaps due to the Nintendo Switch’s tiny little thumb nubs, aiming in this game is terribly inaccurate. This is problematic because Milanoir relies on that precision to succeed and is pretty darn hard to boot – occasionally coin-op arcade hard. It sometimes requires the banking of shots to hit concealed enemies, or long car chases where you’re required to keep tabs on multiple moving parts. All of which would be hard enough if the controls were good – and they’re not.

Essentially a twin-stick shooter at heart with cover mechanics and some stealth elements, Milanoir cries out for some form of a lock-on or aim-assist – on Switch at least. By the time I completed the game’s second mission – a fairly frustrating car chase, my hands were cramped. From that point on, I was down on the experience quite a bit, trudging through out of obligation – knowing each play session would result in literal physical pain, not excitement. I was tackling each mission with the brute force of just trying to get through it, versus playing tactically or enjoying it very much at all.

How much more fun this all is via couch co-op, which is available, I cannot say.

Meanwhile, you can fiddle with a sensitivity slider, but it was little help. The buttons on the Switch controller are very small, so your hands up feeling like a pretzel after every major battle. Lots of death, cramped hands, and frustration. But perhaps…an isolated problem. 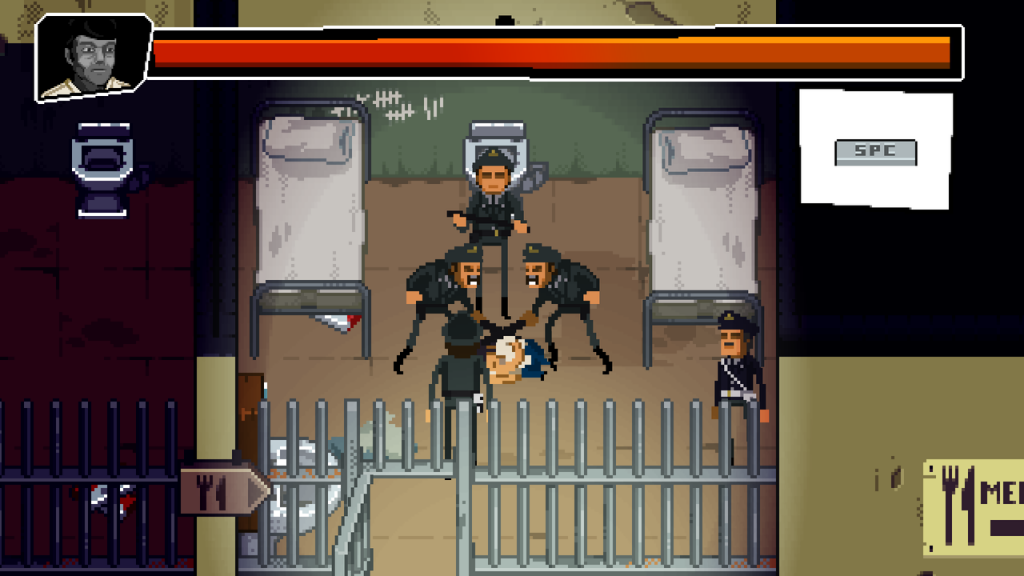 If it sounds like I disliked my time with Milanoir, it’s because I did. And while I’m aware it’s a poor carpenter that blames their tools, I can’t help but wonder how much more enjoyment I would have had with a mouse and keyboard, or standard Xbox Controller. Anything other than Switch’s traditional joy-con, and I think I would have enjoyed my time with the title – at the very least allowing me more time to soak in the incredible scenery.

Thus, Playing Milanoir is a lot like watching a beautifully composed gangster picture that routinely pauses itself to thwap you in the face with a rolled up newspaper.

Milanoir is a wonderfully stylish game with a ton of incredible sights and thrills on offer. If it pans out the control is better in other places, have at it. It’s a treat for the eyes, and hopefully a sign of great things to come from this studio. They clearly have the talent and eye for cinema, scene, composition, and drama.

Now they just need a game worthy of their obviously immense talents.

Full disclosure: This review is based on a Nintendo Switch review copy of Milanoir provided to HeyPoorPlayer by the publisher.